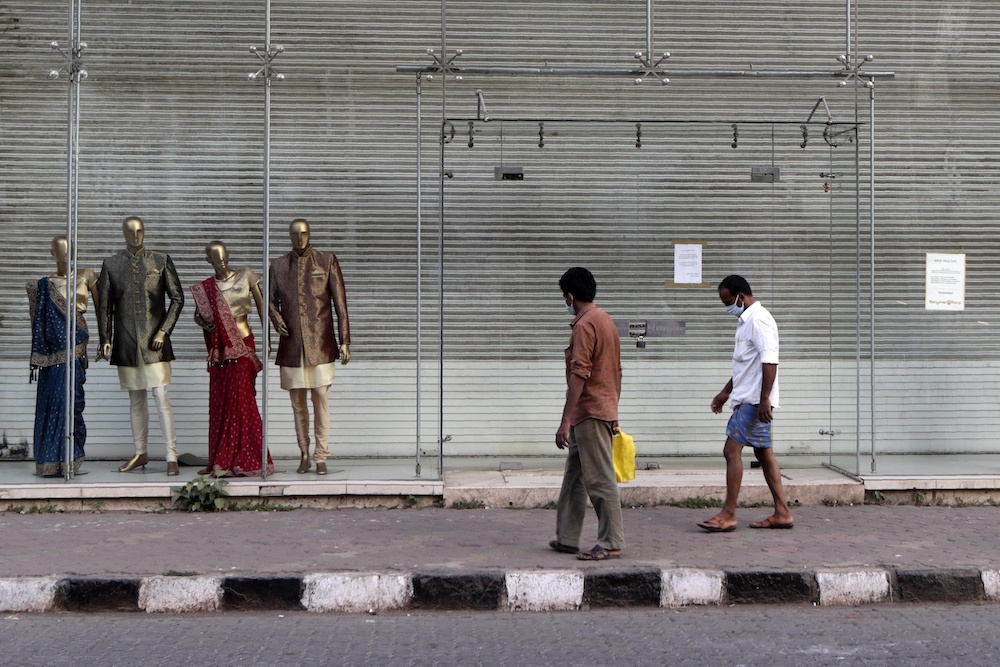 People wearing masks walk past a closed shop during a lockdown in Mumbai on April 5, 2020. Courtesy of Rajanish Kakade/Associated Press.

On local trains, I used to overhear phone conversations. Fights, flirtations, and often the question: Khana khaya? Did you eat?

Mentally, I’d roll my eyes. If someone asked me, my answers would be monosyllabic. Food wasn’t something I liked to talk about, and the everydayness of the question diminished it in my view. That is, until last week. I get it now. The superficial—What are you eating? Is that all?—masks the essential (I’m thinking of you). If friends ask me now, I answer in all earnest: Khichdi. Bread. Potatoes, yes, again.

My timeline is now full of photos of self-prepared meals and recipes. I read them, uselessly. Most ingredients are missing from our kitchen. We’ve never stocked much. There’s a grocery store right outside, a dairy across the road, and a bakery every few yards. But the lockdown was only announced at 8 p.m., when it was scheduled to start at midnight. We’d been self-isolating for a week already, and supplies were so low that, along with the rest of the city, I panicked.

My mother tried to dissuade me, but I went out anyway, promising to keep my distance. It was a mistake. I had to choose between keeping a safe distance, and getting hold of any food. A few mini-packs of soy milk, for which there are few takers in India, and some buns were my only prize, the latter thanks to a baker who recognized me. He’d pulled the grille-gate shut and turned off the lights to dissuade crowds, but when he heard my voice through the cotton mask, he gave me something.

There were funny moments too. At one shop, I asked for bleach and experienced a surge of relief when the vendor said yes, he had some. A pause, and then he said: Face bleach, yes?

Every visit to the wash basin is ironic. Soap-free cleanser. Soap-free shampoo. What use now? I had a bar of real soap tucked away, thankfully. I’d bought some off a woman I know online as the Alt Prime Minister. There was a fun campaign going at the time: An Alt Sarkaar (shadow government) was formed on Twitter, with a cabinet and ministers who would announce measures to which the actual government ought to have paid attention. Vidyut was elected Alt Prime Minister via an online poll. Aside from digital activism, she also makes soap, giving each bar an interesting name. What I have now is “Black Day,” a bar of black soap she made on December 11, 2019, the day the government passed the Citizenship Amendment Act (CAA).

The amendment offers citizenship to illegal immigrants as long as they’re Hindus, Sikhs, Christians, Parsis, Jains, or Buddhists who declare that they fled persecution in three neighboring Muslim-majority nations: Pakistan, Bangladesh, Afghanistan. Only Muslims from those countries are excluded from citizenship citing persecution. The amended law doesn’t take into account that Myanmar and China are in the neighborhood too, and Muslims have been brutally persecuted there. Or that minority sects like Ahmadis or Shia are also vulnerable even within Muslim-majority nations. It also ignores Tamils, whether Hindu or Muslim, who might face persecution in Sri Lanka. It is as if the persecution and suffering of Muslims in South Asia were irrelevant, something that can be shrugged off by India. It is also the first time that India, founded on the principles of secular democracy, has singled out Muslims for isolation by way of policy.

The act heightened fears around the “National Registry of Citizens,” a registry that had already been initiated in one state, Assam, where the government had confined thousands to detention centers for being unable to prove that their forefathers lived at a particular address and were therefore not illegal immigrants. In January and February, tens of thousands of Indians took to the streets. There were multiple sit-ins in cities across India, many led by Muslim women. For a few weeks, art bloomed. Libraries popped up.

As COVID-19 began sweeping across the world, moving from China to Europe, state elections were held in Delhi. The party that is currently in power nationally lost. Suddenly, violence was reported on the fringes of India’s capital city. Murders, mobs, arson. It was said that the violence was a backlash against the sit-ins and protests against the CAA/NRC. Police arrested a Muslim leader and social media accounts suggested that Muslims were responsible for the violence, although it was Muslims who died in larger numbers, and the majority of the businesses and homes burnt down belonged to Muslims. Muslim peace activists were arrested and their families say they’ve been tortured in custody.

A certain miasma already hung in the air. Long before the coronavirus hit, many of us were practicing social distancing of another kind. I was already staying home a lot. I was afraid of talking to many former colleagues or schoolmates. It was impossible to accept their affection for me while witnessing their hatred of Muslims; it was no longer possible to be me without also being “Muslim.” Like-minded friends were distraught. Some threw themselves into relief work. Others admitted to being depressed. We didn’t need to meet each other to know. We read the news. We saw each other’s social media posts. We slept poorly. We had nightmares.

I caught myself thinking of a chakravyuh—a military formation whereby you are encircled and trapped. With surveillance and restricted mobility becoming acceptable in the name of public health, was this the beginning of something more dangerous, more discriminatory than a virus?

When news of coronavirus cases in India started to come in, I wasn’t worrying about rice, noodles or sanitizer. Instead, I sent messages to people who were attending sit-ins, pleading with them to quit. Others, who understand how dangerous narratives are spun, also urged them to quit. Movements are hard to build up, though, and there was no official lockdown. Parliament, politics, pilgrimages—nothing had been halted. The protestors felt they could continue to sit-in with masks. I had to admit, it wasn’t only their health I worried about, but that they’d get painted over as obstinate and irrational. Irrational Muslims.

The protests wound up after the Prime Minister announced a “janta curfew”—a people’s curfew, a single 14-hour period of isolation—and also asked the public to clap and bang on pots and pans to show appreciation for doctors. They did so enthusiastically.

Immediately after the curfew ended, people poured out of their homes to celebrate. A nationwide lockdown was announced only two days later, on March 24.

After the initial panic, I was calm. True, we were low on groceries. True, there was no immediate clarity on how one could go out to shop for basics. There were memes: Someone on social media shared an image of a heavily padded rubber bodysuit, to wear when you go out for groceries. It suggested protection from batons aimed at your backside and thighs. One politician had reportedly asked cops to break people’s legs, or just shoot them if they violated the lockdown order.

Still, I felt calm. The lockdown felt like a physical enactment of my inner world—a sense of siege, of caution and confusion. I had the relief of a dozen unread books, waiting. Besides, it was getting warmer. It is already close to 90 degrees Fahrenheit in the evenings here. The pandemic won’t hit India as hard, I thought.

Then came the awful visuals: thousands of migrant workers trapped in cities who had been abruptly thrown out of work, and were now hungry and desperate to go home. Train and bus services had already been suspended. They would have to walk hundreds of kilometers to get home. Outraged at the treatment of the workers, some citizens began to donate rations and funds. And masks.

My eyes barely left my phone screen. It was like being in a tunnel where the roof has fallen in, our collective hands bloodied from trying to dig out despite a lack of tools. All tunnels have ends, of course. Perhaps it will be three months, not three weeks. Or three years. Everyone says to brace yourself. On the other end of the tunnel could be a mess of an economy and millions of starving people with low immunity. And who knows what the spring harvest was like? How much were farmers able to store? Was the government able to procure enough grain?

It became impossible to read or write about anything outside of this. My mind turned circles around words like decency. Dignity. Equality. It returned to warm spots of memory—places blue and burnt sienna, sprawling libraries. It also sprang towards terrifying stories of famine from the last century.

For some reason, I also kept returning to the image of a maze: the Bhoolbhulaiya in Lucknow’s Bada Imambara. It is full of sunlight glancing off honey-tinted stone walls. People must have had a taste for perplexity back in the day. Perplexity can be charming, unlike the grim certitudes of a tunnel. Not everyone makes it out though. I caught myself thinking of a chakravyuh—a military formation whereby you are encircled and trapped. With surveillance and restricted mobility becoming acceptable in the name of public health, was this the beginning of something more dangerous, more discriminatory than a virus?

Some of India’s COVID-19 deaths were traced to a large gathering of Muslim preachers, the Tableeghi Jamaat, in Delhi. That religious congregations are associated with risk of infection is not news, and the Jamaat had already congregated before the lockdown was announced. The instructions were to stay put where people were and not to travel. So, many of them stayed put. Large numbers of Hindu pilgrims had also traveled to temples like Vaishno Devi and Tirupati around the same time and had also sheltered in place. However, a bunch of television news anchors began to focus mainly on the Tableeghi gathering, accusing them of hiding or holing up, instead of simply saying that they were stranded as pilgrims of other faiths were. The phrase “Corona Jihad” was used.

When I first took a bath with my bar of black soap purchased from Vidyut’s online store, I started crying. This black, black day. These days that never stop dawning black.

I was first alerted to the “terrorist” hashtag by a stranger, who’d apologized to me and a few other Muslims on Twitter, saying he felt ashamed by it. I felt compelled to go check it out, although friends had advised against it: Why do this to yourself? But I feel the need to bear witness. This sort of hate campaign has been mounted much before the pandemic. An earlier hashtag called for the economic boycott of Muslims in India. Again, I made myself look.

I took screenshots, reported a couple of tweets, but there were too many. For an hour, I kept scrolling. Down, down. The tears came, but I couldn’t put the phone away. That evening, I wept until my head started to hurt. I was careful to be silent though, and to wash my face well before I faced my mother. Then I made myself a cup of tea and picked up my phone again. The essential question was waiting: Have you had your tea?