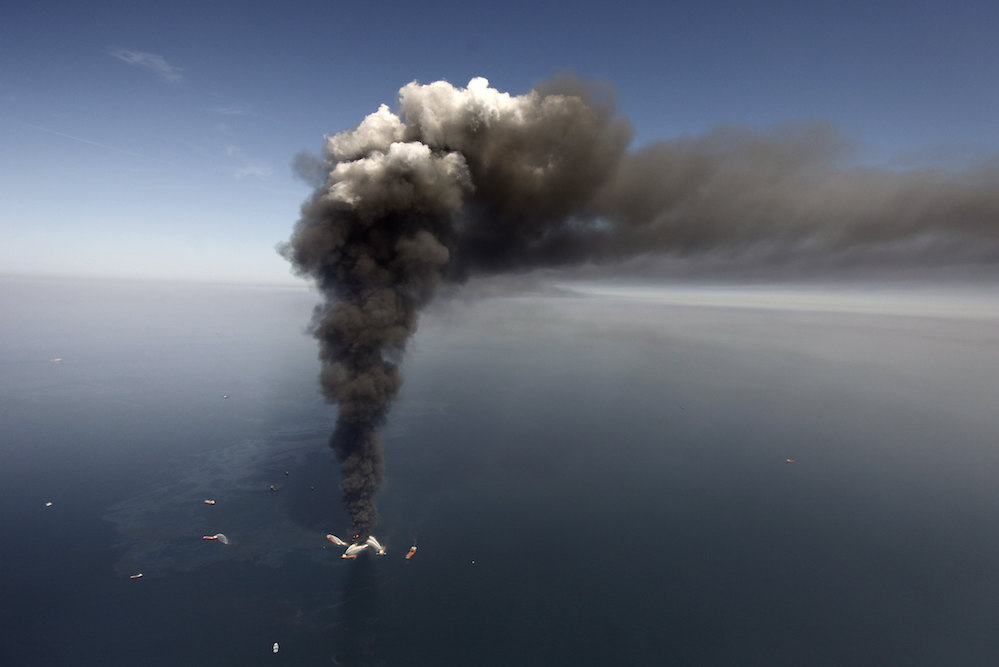 This April 2010 photograph captures large plume of smoke rising from fires on BP's Deepwater Horizon offshore oil rig. The 2010 Gulf of Mexico oil spill resulted in the death of 11 workers on the Deepwater Horizon and the largest spill of oil in the history of marine oil drilling operations. Courtesy of Gerald Herbert/Associated Press.

For five pesos, I could hold the crocodilo. The handler stood in the shadows of Veracruz’s boardwalk. When I asked why he had an alligator, he told me that he worked for a conservation group, though I did not see any hat or the requisite shirt, no flyers or posters—just a young guy, hustling nature on a Sunday night.

I gave the handler some change and he gave me the juvenile crocodilo. Of course, I wanted a picture.

The transfer was awkward. “Hold your phone in your left hand,” the handler instructed, and “cradle the crocodilo below the front legs.”

The gator thrashed, and before I could get a grip under its smooth belly, my cell phone went flying across the concrete boardwalk.

On the second try, I showed more confidence, and as I struck my pose, locals circled around to shoot something even more exotic than a crocodilo—a gringo with a crocodilo. 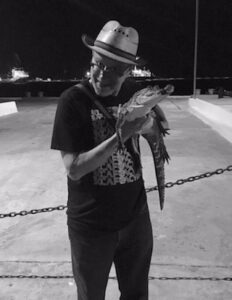 Gringo with a crocodilo. Courtesy of the author.

Little did they know, this was not my first gator show. I have lived on the Gulf Coast of Florida since 2001, in a city where we are never far from alligator habitats—or tourist traps. So why the disconnect? Despite our shared history and regional overlap, the gulf remains a great cognitive divide between Mexico and the United States—which was why I was suddenly the exotic here in Veracruz.

We are so close, and yet so far away. Veracruz, on the Gulf of Mexico’s west bank, feels a lot like Tampa Bay, on our shared sea’s eastern shore. Men dress in guayaberas, or the subtropical uniform of cargo shorts, t-shirts, and flip flops. In either city, you can get a decent café con leche. Even our historical figures overlap. In 1520 the Governor of Cuba tasked the red-bearded Pánfilo de Narváez with halting Hernán Cortés, who was heading west to conquer the central plateau. (We know how that story turned out.) Eight years later, failing upward, Narváez made landfall close to my adopted home in la Florida, bent on replicating Cortés’s fabulous success.

What really divides us is not the Gulf, so much as differences in how we view our aquatic commons. For Mexico, the Gulf offers drilling fields for oil, managed by multinational corporations and the state-run Petróleos Mexicanos, or PEMEX. In Texas and Louisiana, likewise, the Gulf means petroleum extraction and refineries. But an invisible line at Florida’s western border subtly shifts our perspective. Past Pensacola, instead of petroleum, we extract money from the tourists, who come for the winter sunshine, relaxed rules, and margaritas on the beach.

The idea that Florida gets its own, tourist-focused vision of the Gulf became policy in 2006, when then-President George W. Bush signed the Gulf of Mexico Energy Security Act, restricting oil leases east of the “Military Mission Line,” off Eglin Air Force Base at Pensacola. This moratorium, which sunsets in 2022, drew a line the sand between industry and leisure.

But can this truce last? Floridians especially should start to rethink how we see the Gulf. A second Trump term surely signals a collision between vacation fantasies and the dirty business of petroextraction.

And that problem is what took me to Veracruz. I wanted to see the Gulf of Mexico from the other side, imagine new ways for Florida to reinvent itself. Having watched the sunset over our sugar-sand beaches countless times, I wanted to see it rise. I needed a new perspective on the waters that lap against the seawalls by my office at work.

So I set out for a journey along the gulf’s southern coast. Having finished a three-month Fulbright gig in Puebla, on the central plateau, I boarded an ADO bus for Veracruz and then rode east through Tabasco and Campeche—some of the poorest states in the country. The highway took me along miles of untouched shoreline, punctuated by PEMEX boomtowns. At the end of the road, I would catch a cheap flight home from Cancún, the one place in Mexico that tourists usually visit.

After Veracruz, the bus dropped me off in Coatzacoalcos, a gritty river town guarding the Isthmus of Tehuatepec, between Oaxaca and Chiapas. The zoo was closed, so I rode the ferry across the river. And then I rode it back again, watching barges chug up the muddy estuary to the refinery. I ate my first bad tamale in four months. When I wandered to the river banks in the early evening, looking for a fisherman to ferry me upstream, a local matron warned me away.

“Ten cuidado,” she whispered, as I bargained with a drunk and out of work pescador, “be careful.”

My next stop, the colonial port of Ciudad del Carmen, nearly broke my heart. Set like a coral-painted fingernail over the northern tip of Laguna de Términos, it looked idyllic on the map. But decades ago, Carmen traded shrimp for petroleum as an economic driver.

The story of this city’s transformation is both legend and cautionary tale. In 1961 a local fisherman named Rudesindo Cantarell spotted plumes of black oil rising below the turquoise waters, some 50 miles offshore. PEMEX moved in a decade later, honoring the Carmelo fisherman with the name of its massive drilling facility, the Complejo Cantarell. From 1978 to 2015, shallow-water fields off the Bay of Campeche produced two-thirds of the nation’s petroleum, powering a country where oil produces between five and ten percent of the GDP. But oil revenues swing wildly and Campeche’s bonanza also demanded sacrifices. In June 1979 PEMEX’s Ixtoc I rig blew, in the second-worst spill in Gulf history, spewing 30,000 barrels daily over the next ten months.

Despite the spill, and even as we drive to the beach in our gasoline-burning cars, Floridians cling to the idea that the Gulf is, for us, a pure source of nature—even though there’s plenty of evidence to the contrary. As an adopted Floridian, I witness this romanticization every day. I indulge the fantasy myself.

Like oil and water, petroleum and tourism do not mix. When PEMEX wound down operations in the Bay of Campeche, Ciudad del Carmen sank into a recession. Unemployment (and suicide rates) spiked. High-end hotels from the peak years today sit empty. Visitors never came back. Tours of the Laguna de Términos, I regretfully learned, have been cut to weekends only. The city’s charming centro shutters up before dark. Ciudad del Carmen makes the argument that the Gulf is deeply affected by the petroleum industry, even when one can no longer see the offshore rigs.

So why do fantasies of a pristine Gulf persist in the United States, particularly in the South? Why do we cling to the illusion that certain sectors remain untouched by industry?

Ten years ago this April, the Deepwater Horizon had a blowout, causing oil and methane to spew from the 5000-foot well until the following September. The 2010 accident replaced Ixtoc I as the largest oil catastrophe in Gulf history. Floridians cried foul over tarballs and fish kills and dirty birds, though the accident was inevitable, given U.S. dependence on continued oil production, lax regulation, and most of all, the calculated risks of deep-water drilling.

The dangers call for some self-examination. Despite the spill, and even as we drive to the beach in our gasoline-burning cars, Floridians cling to the idea that the Gulf is, for us, a pure source of nature—even though there’s plenty of evidence to the contrary. As an adopted Floridian, I witness this romanticizing every day. I indulge the fantasy myself.

And yet it’s undeniable, as most Florida politicians understand, that once Florida’s beaches lose the label “pristine,” they will also lose revenue. Tourists do not visit the Gulf of Mexico to think about our dependence on oil and gas. To date, the state’s Democrats and more sensible Republicans have fought the pressure to drill. The draw of clean beaches (not to mention an air force base and that pesky Loop Current) has kept industry at bay. But how long can the illusion hold? Are we hiding together, behind the thinnest of fictions?

Once I got back from Mexico, I learned that a 2009 country music hit by the Zac Brown Band, “Toes,” had wormed its way onto my teenage son’s cell phone. The YouTube video has 49 million views; fans play the song at funerals. In this catchy number, best described as redneck with a Caribbean lilt, Zac and his boys celebrate the bittersweet last day of vacation. Before heading home to Georgia from Mexico, the singer closes out his holiday hazy, lazy, and drunk. He has “rolled a big fat one,” and sings:

I got my toes in the water, ass in the sand
Not a worry in the world, a cold beer in my hand …

The chorus then swings into some Spanglish, adiós and vaya con diós … all to say that the Gulf of Mexico is where you go to forget about worries or work.

Evenings on the gulf, in all sincerity, have this way of holding back worries of work and time. In magical moments, the sun brushes against the greenish-purple water. The sky slowly fades into mellow pastels, then a bronze flash flickers along the tangent of the horizon. The rosy clouds, deepening sea, and metallic last rays of daylight play against each other in a silent, stunning drama. Conversations pause. Cameras come out for selfies. One feels an instinct to dip fingers or toes into the gently receding waves. People often clap at sunset.

After seeing derricks off the Bay of Campeche, with the effects of oil withdrawal on Ciudad del Carmen, I pray that the same view never intrudes upon my beaches at home. But I also see the damage of treating the Gulf of Mexico as an escape, as a paradise constantly in danger of destruction. Three decades of scholarship in environmental humanities tell us that visions of the unspoiled retreat—and ruin—uphold a false dichotomy that keeps us from seeing the everyday nature around us.

With the Deepwater Horizon spill now ten years in the past, the same drilling continues today. Invisible waste from Midwestern farming and slaughterhouses, meanwhile, washes against Florida’s sandy beaches. In terms of environmental threat, agricultural run-off gives oil a run for its money. A hypoxic, “dead,” zone at the mouth of the Mississippi River today ranks among the world’s largest; this year’s dead zone will equal in size the state of Massachusetts, the federal government reports. Which is worse? The Deepwater Horizon oil spill or the pollutants from a countless string of hamburgers?

Maybe we should flip our ideas about this great shared sea. The Gulf of Mexico is not an exotic. A mythology of pristine beaches does the environment no favors. Rather than looking to the Gulf of Mexico as a Paradise to which we escape, far better to ask, how do these waters work for us?