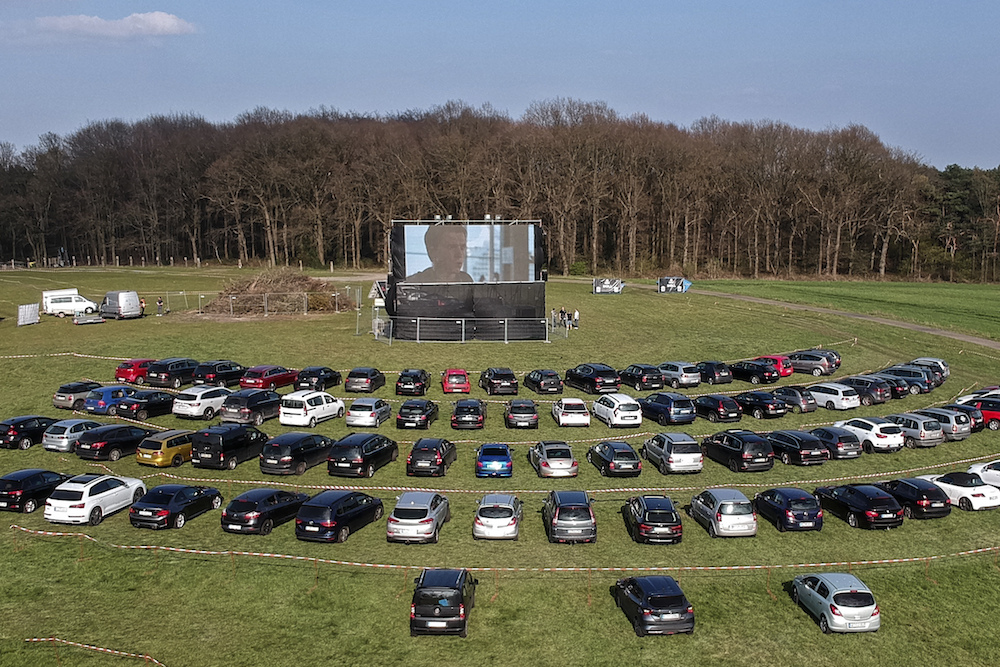 A popular bike farm, a cinema, and an event company had to close their business due to the social distancing orders in Germany, so they decided to set up a big screen in a meadow and show movies for people in their cars. Courtesy of Martin Meissner/Associated Press.

As a resident of Bonn, a small college city that once served as West Germany’s capital, I know something about calm and its connection to health.

I live a brisk walk away from the home of our most famous native son, Ludwig van Beethoven. In 1812, the composer, who had health problems that might have made him vulnerable in this pandemic, headed off to a retreat ordered by his doctor. While there, he wrote to an unnamed woman, in one of his famous “Immortal Beloved” love letters:

Be calm my life, my all. Only by calm consideration of our existence can we achieve our purpose to live together.

Through good fortune and management, this time of COVID-19 has provided Germans considerable opportunity for calm consideration—and reconsideration.

Before the pandemic, we had become tired of her, our eternal Chancellor, Angela Merkel. She had burdened Germany with the gigantic humanitarian task of receiving more than 1 million refugees in 2015. We were exhausted with all the resulting change in our communities, and with the political turmoil, and were ready to see her head off into retirement.

But as COVID-19 arrived, we realized how much we needed calm. Chancellor Merkel has provided a good deal of it in her modest and rare appearances. Of course, Germany’s robust health system, and its enormous capacity, has also projected an air of transparent confidence, which has been embraced by citizens.

Merkel’s calm has been unbreakable, even when she herself was exposed to the virus and forced to quarantine. This calm is so appreciated that she is currently the most popular politician in Germany, with the approval of 64 percent of the population.

Besides her calm, the Chancellor also combines two strengths: First, she addresses the people as democratic partners and as her equals. She does not claim to have higher authority—and she certainly does not claim total authority. Second, her scientific education is a great virtue in a situation that demands facts and science-based reasoning.

In Germany, now, we are discovering how intimate the links between democracy, science, and health really are.

At its best, our health system combines those values in a transparent fashion that explains in part why COVID-19 has done less damage here. You don’t have to take my word for our health system’s ability to handle the emergency. You can see it by clicking here. The website immediately finds hospitals for every city and region of Germany, their capabilities, and their current capacity. It is so accurate that if you were an emergency responder, it could help you decide where to take a patient.

And, should you want to see how Germany as a whole is handling the epidemic, there are three categories of hospitals listed on the register: low-care ICU, high-care ICU, and ECMO, which stands for Extracorporeal membrane oxygenation, the treatment for people whose condition has not been stabilized on a ventilator. If the hospital is color-coded “green,” it means that the hospital has plenty of capacity. “Yellow” means reserves are being stretched, and “red” means that the hospital is working at full capacity in its intensive-care capabilities.

Viewing the obvious capacity in this register has a tremendous calming effect on us all.

Our health care system is linked to a highly efficient governmental system of scientists and experts. Professor Christian Drosten, the virologist who developed the COVID-19 tests for China and was early in preparing Germany’s pharmaceutical industry and many laboratories for mass testing, works at Berlin’s Charité hospital. So when Merkel declared a state of emergency—in calm and reassuring words—the testing could begin efficiently.

I find myself wishing that the U.S. would allow itself a sip of the healing portion of a quiet and calm political style, and a turn toward a participatory public social system. Such a style, and such a system, would fit the American preference for freedom.

To understand the German health system, one must realize that it is a cooperative, but not a state system. Although it is regulated by the public authorities, the system is supported by more than 100 independent non-profit insurance funds, which have to compete for members. These “sickness funds,” as they are sometimes called, are associated with different professions and companies, and have democratic structures, with regular people having to make decisions, including what gets covered. And once you are in a fund, you can’t be kicked out.

Since 2005, Merkel has supported and promoted this participatory system of health care. She and the federal states of Germany—the country has 16 states—have also built up a system of public health care that was initiated under Federal Chancellor Helmut Kohl and Norbert Blüm, his legendary social minister. By and large, this system supports the elderly and sick so they can live as long as possible in their home environment, and are not dependent on the help of their acquaintances, family, and friends.

The hospitals in Germany are thus relieved of the burden of dealing with chronic care and can build up capacity to concentrate on the most serious cases and emergencies.

As a result, the German health system is nowhere—not even in COVID-19 outbreak areas—near a capacity problem. This emphasis on home care, as opposed to nursing homes, may be part of the explanation for Germany’s relatively low death rate from the pandemic.

All that being said, our low death rates from COVID-19 are also the result of some significant luck. Still, our participatory social and health systems, combined with a style of politics that treats citizens as responsible partners, have proved their worth in the relative calm people feel. This calm feels like success, and it strengthens our confidence in the German government system, which emphasizes deliberation and power sharing. It’s noteworthy that right-wing politicians and parties have lost popular support in the crisis, perhaps because there is little popular resentment to tap.

Germans have also learned again, through COVID, just how important the interaction between politics and science is. I feel fortunate that we have free and independent science journalism. (For an example of such German journalism—and an innovative new payment system for independent journalism—I would draw your attention to this platform of “reef” reporters.)

I relate all of this not for nationalistic pride, but to send a message of hope and encouragement. I have many friends and partners in the U.S., which as of this writing has more cases and deaths than any other country. I know so many people have lost, or will lose, a dear relative or friend. May they be well remembered.

I find myself wishing that the U.S. would allow itself a sip of the healing portion of a quiet and calm political style, and a turn toward a participatory public social system. Such a style, and such a system, would fit the American preference for freedom. I hope that as the U.S. seeks salvation from the pandemic, it will consider this direction and not a more authoritarian centralism.