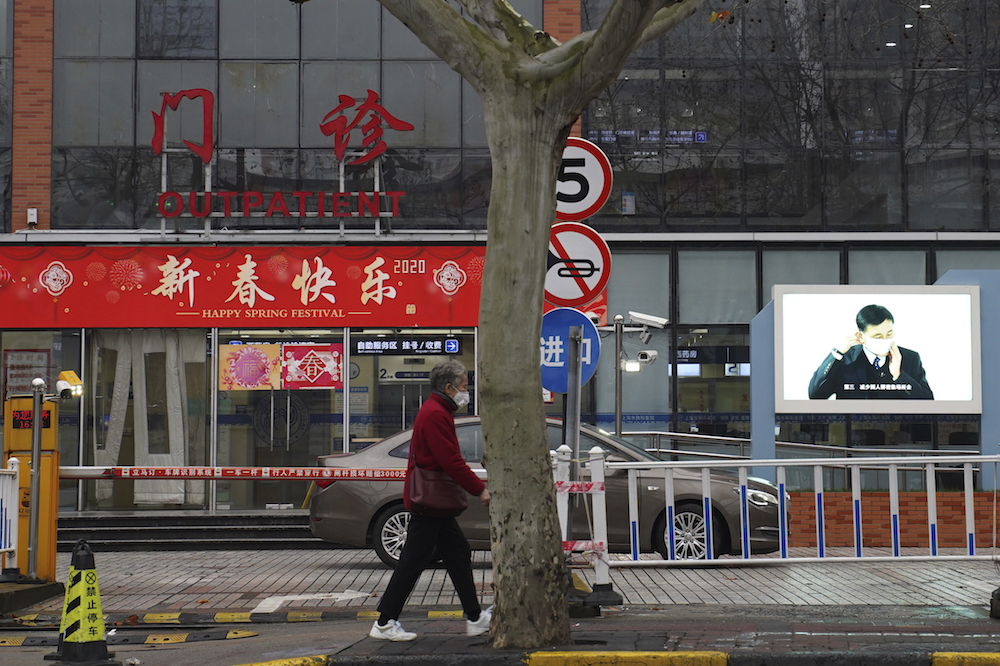 An elderly woman with a face mask walks past the entrance to the outpatient ward with a video display showing prevention methods in Shanghai earlier this year. Courtesy of Erika Kinetz/Associated Press.

On March 15, I flew home to the U.S. to bring my daughters back to Shanghai. The sharp contrast between the way China has sought to prevent the further spread of COVID-19 and the way the U.S. has handled the disease so far has been alarming.

My family has been navigating the shifting geography of COVID-19 for months, as the virus first emerged in China, our country of residence, and then moved onto our native home, the United States. We’re Americans with a home in Virginia, but a couple of years ago I took a job in Shanghai, and we moved there, with my husband commuting back and forth to his job in D.C. When the coronavirus began to shut down China over the Lunar New Year holidays in January, we were on vacation in Japan. Once Shanghai schools began announcing closures, we decided the girls should fly back to the U.S. unaccompanied to stay with my husband, while I returned to work in Shanghai. The subsequent Chinese lockdown would separate us for two months.

By mid-March, we had reached a pivot point. The girls had just enrolled in their old Virginia public schools when those schools announced a shutdown. Meanwhile, their Shanghai school was sending out upbeat notices about reopening in the near future. And with U.S. cases on the rise and China tightening its borders to prevent re-infection, I figured it was now or never.

I was on the ground in the U.S. for less than 36 hours, but saw enough to be alarmed. If I hadn’t volunteered quite forcefully that I had just come from living in China, I don’t think I would have gotten anyone to check me for fever before entering the U.S. Once I declared myself, I was escorted to a “CDC line” for a cursory temp check (with a large group of returned Mormon missionaries from Europe), given a CDC flier about COVID-19 symptoms, and asked to stay home and minimize my trips outside for 14 days. While on the ground, I did not leave my house except to ride with my husband to pick up some takeout; I was stunned at how full my hometown restaurants were.

The girls and I landed back in China on March 19, and our arrival there was the opposite of my entry to the U.S. Our flight from Tokyo landed at 11:45 am, but we sat on Shanghai’s Pudong International Airport tarmac for two hours before immigration officials let us disembark. During those hours we filled out health forms that asked, among other questions, whether we had sore throats, runny noses, or fevers, and whether we took any medication to reduce fevers. I debated whether to report a stuffy nose that I was sure was caused by allergies and not any other illness.

After they let us off the plane, we were put into a line that did not move for another two hours. When we finally reached the front of that line, we sat down with a man in full PPE—a white hazmat suit, face-shield, and glasses. He reviewed our health forms. I did say I had experienced the occasional stuffy nose, but insisted it was because of allergies. I held my breath.

He paused, but decided to let us through to the next stop—a line for a Xerox machine run by police officers in hazmat suits, where we had to make two copies of our health forms. The senior official in a hazmat suit also put yellow stickers on our passports—meaning that we would be required to take the COVID-19 tests and undergo mandatory 14-day quarantine either at home or a hotel.

Even now, I feel outrage that the United States still does not have enough tests for the symptomatic, while China had enough to test asymptomatic foreigners.

The next line was for passport control, and then another line for a body temperature scanner, and then another interview with another set of hazmat-suited individuals who would decide whether we were “high-risk” and needed to go to the hospital to get our COVID-19 tests or whether we could go to our home district to have the tests performed there. Luckily, we got waved into the home district channel. That meant we would be allowed to pick up our luggage and move to a line for a bus to our home district in Shanghai.

In that line, we were required to download an app and provide our passport information. Then another hazmat-suited person asked if we wished to do our quarantine at home or at a hotel (they offered two levels of hotel, one that was about $30 per person per night and another that was $60 per person per night). We opted for the home quarantine—which would be allowed only if our neighborhood committee and building management agreed. Since we live in a building of foreigners like ourselves, we were pretty sure the building management would agree. The official asked for our passports and informed us that they would be returned to us only after our COVID tests.

After a 45-minute wait, we were asked to form a line. Police officers stood at the front of our line and at the back. We were led to a large tour bus, and got onboard. We pulled out of the airport parking lot around 6:30 pm. We had been in Shanghai for almost seven hours at this point. The girls were amazingly patient with this process—it helped that the 13-year-old had her phone and could watch TikToks; the 10-year-old alternately read and napped on the luggage cart.

The bus arrived in front of a large gymnasium around 8 p.m. I turned on my phone mapping app to find out where we were—it was the Xuhui District Sports Middle School. After a temp check, the hazmat-suited workers took our names, assigned us ID numbers (I was I7), and led us all to a cordoned-off section of the gym.

Our bus was dubbed “Group I,” so we were led to Section I. There was a bottle of hand sanitizer and a flat-screen TV at the front of the section, and what appeared to be a selection of videos on demand. We were each assigned a reclining lawn chair where we would wait to be called for our COVID tests. Volunteers in hazmat suits passed out new blankets, bags full of bakery breads, imported German milk, masks, and water. I was impressed by their foreigner-friendly care package—they knew their audience. Around 8:30 p.m., another hazmat-suited individual called us up and led us to an outdoor alley behind the middle school. There, seated at a table under an awning, were two nurses, who swabbed each of our nostrils and our throats as well. I double-checked the vial to make sure it had my name. Once we were done, we were escorted back to our lawn chairs to wait.

I spent a sleepless night in my lawn chair, worried that after two months of staying virus-free in China, I might have managed to pick it up in the U.S. during my 36 hours on the ground. What if the girls were asymptomatic carriers: Would they really separate me from my children? (The answer is yes—all infected children are separated from their parents and sent to the children’s hospital.) And if I were a carrier, where would my kids go? I watched the volunteers spray down the chairs of travelers who had finished their waits and were off to their homes. Even now, I feel outrage that the U.S. still does not have enough tests for the symptomatic, while China had enough to test asymptomatic foreigners.

No one ever told us we were negative. But at 2:30 a.m., we were informed that it was time to go home, and we boarded a bus. More paperwork awaited us in front of our apartment building, where the security guards for our complex and the doctor who would be supervising our case (also in full hazmat gear) met us. Finally, after we promised not to leave our apartment, our passports were returned to us, and at exactly 4:03 a.m., some 16 hours after landing, we were finally home.

That morning, a young woman in a hazmat suit knocked on our door and took our temperatures at 10 a.m. She returned at 3 p.m. to take our temps again. This routine was repeated for 14 days before we’d be permitted to circulate in the general Shanghai population. We chatted occasionally with our temperature takers (they were a rotating cast of twentysomething women). Initially, a man would accompany them to film the temperature reading, but by the final few days, the women came alone.

A few days after our return, we discovered that authorities had placed a sensor on our door. And more than a week after the start of our quarantine, we received a note informing us we were not to open our door more than five times a day. Because we were trapped in the apartment, we had to have everything—groceries, toilet paper, takeout meals—delivered. There were a couple of days where we were inefficient with our ordering and had more than five deliveries—and more than five door openings. Oops.

Entering China was a long, tedious, and dystopian process, but extremely orderly and well-organized. All the foreigners waiting in the long lines with us at the airport and testing center were polite and patient as well. We understood why the Chinese were doing it. On the day we landed, five people right away were found to have the virus: a Chinese husband and wife returning from New York, a French citizen and a Chinese student traveling from France, and a Chinese student returning from Switzerland. Nine days after we returned to Shanghai, the Chinese shut down the border to all foreigners in an effort to prevent the further re-importation of COVID cases. I am so glad I made that mad dash back to pick up the kids when I did.

After 14 days of being locked away with my family, where we miraculously got along much better than expected (a combination of online school and work kept us pretty busy), we were cleared to exit quarantine. We bid goodbye to our cheerful temperature-taker lady, who informed us that this was her last day as well—and that she would be going back to her real job, at the dental clinic. The doctor on our case texted me our health freedom papers.

We can now walk the streets again, but we have been cautious about re-entering Shanghai society. Markets are bustling and the subway is nearly full; though the manicure shop, a women’s clothing boutique, the draft beer bar, a branch of a popular bubble tea chain, and the quirky hipster gift shop didn’t survive, most of the businesses in our neighborhood have re-opened. But I find the crowds a little unnerving. We’d gotten maybe a bit too used to keeping our distance and keeping to ourselves.

Still, Shanghai is almost back, and so are we.