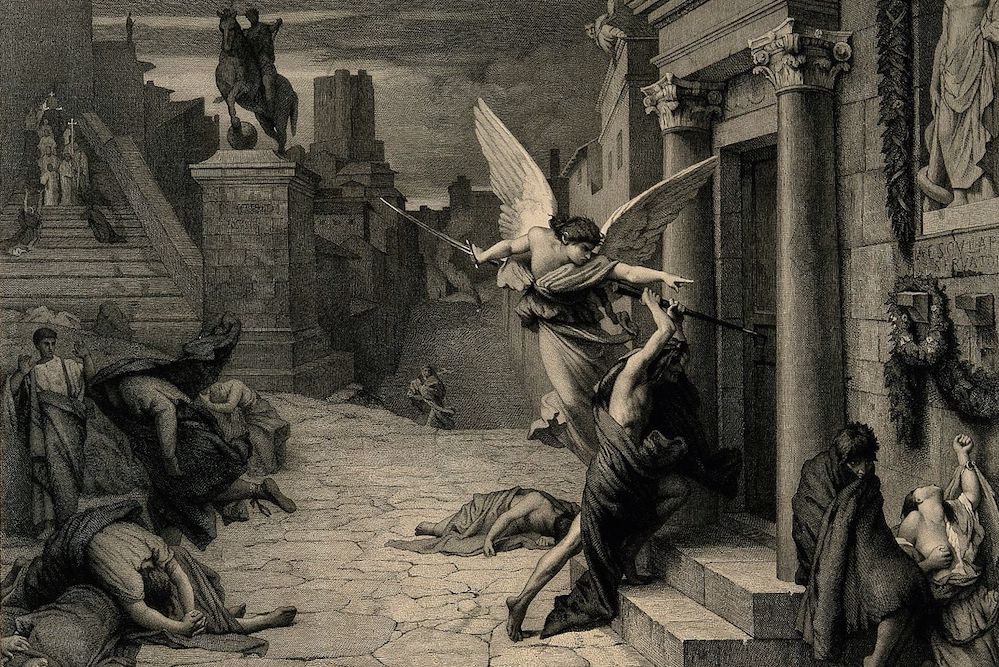 The angel of death striking a door during the plague of Rome: an engraving by Levasseur after Jules-Elie Delaunay. Courtesy of Wikimedia Commons.

Around 165 A.D., the Anatolian town of Hierapolis erected a statue to the god Apollo Alexikakos, the Averter of Evil, so that the people might be spared from a terrible new infectious disease with utterly gruesome symptoms. Victims were known to endure fever, chills, upset stomach, and diarrhea that turned from red to black over the course of a week. They also developed horrible black pocks over their bodies, both inside and out, that scabbed over and left disfiguring scars.

For the worst afflicted, it was not uncommon that they would cough up or excrete scabs that had formed inside their body. Victims suffered in this way for two or even three weeks before the illness finally abated. Perhaps 10 percent of 75 million people living in the Roman Empire never recovered. “Like some beast,” a contemporary wrote, the sickness “destroyed not just a few people but rampaged across whole cities and destroyed them.”

Infectious disease was long part of Roman life. Even the richest Romans could not escape the terrors of a world without germ theory, refrigeration, or clean water. Malaria and intestinal diseases were, of course, rampant. But some of the ailments Romans suffered boggle the mind—vicious fevers, wasting diseases, and worms living in putrefying wounds that refused to heal. The physician Galen would recall a member of the Roman gentry who accidentally drank a leech when his servant drew water from a public fountain. The 4th-century emperor Julian found it a particular point of pride that he had only vomited once in his entire life. By the standards of antiquity, this was a bona fide miracle.

But smallpox was different. Rome’s first smallpox epidemic began as a terrifying rumor from the east, spreading through conversations that often simultaneously transmitted both news of the disease and the virus itself. The pathogen moved stealthily at first, with people first showing symptoms two weeks or so after contracting it.

In the face of smallpox’s sustained assault, the resilience of the empire amazes.

The plague waxed and waned for a generation, peaking in the year 189 when a witness recalled that 2,000 people died per day in the crowded city of Rome. Smallpox devastated much of Roman society. The plague so ravaged the empire’s professional armies that offensives were called off. It decimated the aristocracy to such a degree that town councils struggled to meet, local magistracies went unfilled, and community organizations failed for lack of members. It cut such deep swaths through the peasantry that abandoned farms and depopulated towns dotted the countryside from Egypt to Germany.

The psychological effects were, if anything, even more profound. The teacher Aelius Aristides survived a nearly lethal case of the plague during its first pass through the empire in the 160s. Aristides would become convinced that he had lived only because the gods chose to take a young boy instead; he could even identify the young victim. Needless to say, survivor’s guilt is not a modern phenomenon—and the late 2nd century Roman Empire must have been filled with it.

Most of all, though, the disease spread fear. Smallpox killed massively, gruesomely, and in waves. The fear among Romans was so pronounced back then that, today, archaeologists working all over the old imperial territory still find amulets and little stones carved by people desperately trying to ward off the pestilence.

In the face of smallpox’s sustained assault, the resilience of the empire amazes. Romans first responded to plagues by calling on the gods. Like Hierapolis, many cities across the Roman world sent delegations to Apollo, asking for the god’s advice about how to survive. Towns dispatched the delegates collectively, an affirmation of the power of community to stand together amidst personal horror.

And when communities began to buckle, Romans reinforced them. Emperor Marcus Aurelius responded to the deaths of so many soldiers by recruiting slaves and gladiators to the legions. He filled the abandoned farmsteads and depopulated cities by inviting migrants from outside the empire to settle within its boundaries. Cities that lost large numbers of aristocrats replaced them by various means, even filling vacancies in their councils with the sons of freed slaves. The empire kept going, despite death and terror on a scale no one had ever seen.

Roman society rebounded so well from smallpox that, more than 1,600 years later, the historian Edward Gibbon began his monumental Decline and Fall of the Roman Empire not with the plague under Marcus Aurelius but with the events after that emperor’s death. The reign of Marcus was, to Gibbon, “the period in the history of the world during which the condition of the human race was most happy and prosperous.” This historical verdict would have astounded Romans if they’d heard it back when they suffered through what came to be called the Antonine Plague. But Gibbon did not invent these sentiments. Writing after the turn of the 3rd century, the Roman senator and historian Cassius Dio called the empire under Marcus “a kingdom of Gold” that persevered admirably “amidst extraordinary difficulties.”

Cassius Dio witnessed smallpox’s effect in Rome when it killed most spectacularly. Dio knew its horrors and the devastation it produced. He also believed that the trauma of living through plague can be overcome if a well-governed society works together to recover and rebuild. And the society that emerges from those efforts can become stronger than what came before.

COVID-19 has brought about the first time that much of our world has faced the sudden, unseen, and unremitting fear of an easily spread and deadly infectious disease. Such a crisis can spur terrified citizens to blame each other for the suffering. It can exacerbate existing social and economic divisions. It can even destroy societies. But that need not be so.

The Antonine Plague was far deadlier than COVID-19, and the society it hit was far less capable of saving the sick than we are now. But Rome survived. Its communities rebuilt. And the survivors even came to look back on the time of plague with an odd nostalgia for what it showed about the strength of their society and its government.

May we be so lucky.