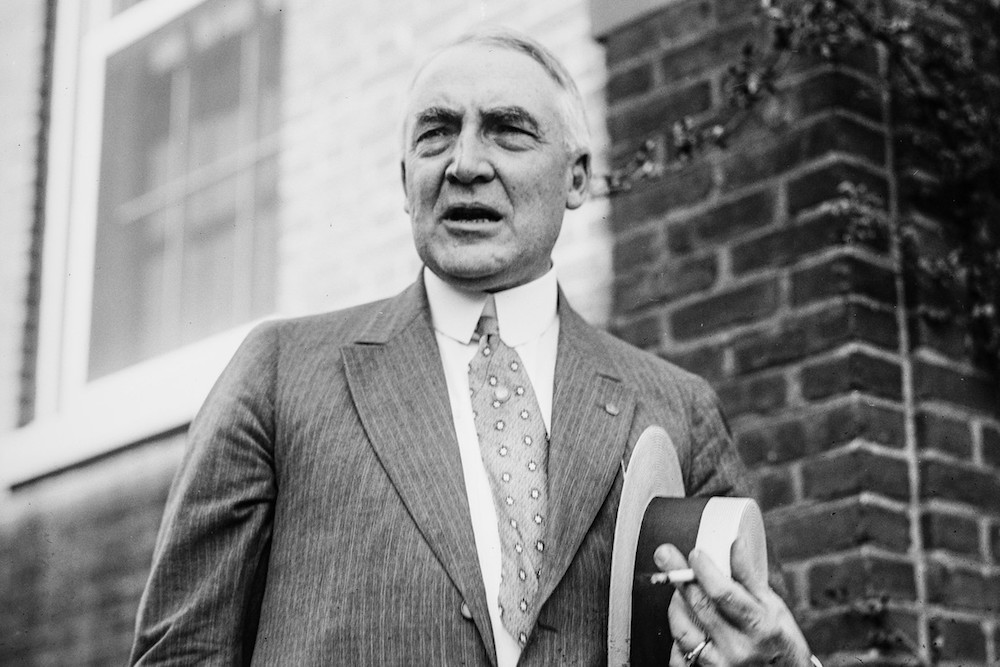 President Warren G. Harding. Courtesy of the Library of Congress.

What is normalcy? And what does it mean when we tell ourselves that we want to get back to it?

When American historians hear talk of “normalcy,” we think of Warren G. Harding. Harding did not invent normalcy. Not the word, nor the state of being. But he benefited from the appeal of both.

Elected president in 1920, Harding campaigned to put a keel beneath a nation buffeted by world war as well as the long and deadly 1918-1919 influenza pandemic. But finding the language for this was a struggle. Harding’s inept speeches saddled him with too many words—making “hope” and “inspiration” fight for breathing space.

But in a speech Harding gave in Boston in May 1920, he managed to convey a text that would be abnormally memorable.

First, Harding defined the problem of perspective, created by war and diseases. “There isn’t anything the matter with world civilization, except that humanity is viewing it through a vision impaired in a cataclysmal war,” he began. “Poise has been disturbed, and nerves have been racked, and fever has rendered men irrational.”

And then Harding offered the cure: “America’s present need is not heroics but healing; not nostrums but normalcy.” It might have been simpler to end it there, but normalcy was just the first in a series of antonyms that Harding suggested, expressing his goals in the negative: “Not revolution but restoration; not agitation but adjustment; not surgery but serenity; not the dramatic but the dispassionate; not experiment but equipoise; not submergence in internationality but sustainment in triumphant nationality.”

What did all that mean then, and what does it mean now? Let’s set aside the question of how heroics and healing play as opposites in Harding’s speechifying. (We can clearly recognize how wrong that rhetorical sleight of hand is when the heroism of the healers among us is so obvious in the world today.) Instead, let’s examine the strong echoes between his rhetoric and our 21st-century desires.

Calling for “sustainment in triumphant nationality” was Harding’s convoluted way of saying let’s make America great again. Elect me, he promised, and he would take America back to a bucolic pre-war, pre-pandemic time, a time of serenity. Mythic though it was, the vision worked. He won, in one of the largest political landslides in American history.

But history didn’t end there. Neither Harding nor normalcy would succeed. These failures, considered exactly a century later, hold lessons for those who seek restoration in our time of fear, disease, and death.

What Harding sought 100 years ago has much in common with what many of us say we seek today, and tomorrow, when the pandemic recedes. We want our lives back.

We want to get away from the volatile and frightening economics of pandemic, to something that feels, well, normal. So did Harding. “If we put an end to false economics which lure humanity to utter chaos, ours will be the commanding example of world leadership today,” he pledged in that same speech.

But Harding-style restoration of economy meant, for many, freewheeling consumption and giddy speculation. As the stock market and the nation’s cities began to roar in the exciting heedlessness of the Jazz Age, nary a caution was raised—except by the most astute observers.

Lack of regulation was a virtue to Harding, a balm after all the rules and restrictions of war and disease. “The world needs to be reminded that all human ills are not curable by legislation,” Harding had said, again in the same speech, “and that quantity of statutory enactment and excess of government offer no substitute for quality of citizenship.”

Harding led to Coolidge; Coolidge led to Hoover. It would take the Great Depression and Franklin D. Roosevelt’s anything-but-normal presidency to create the social protections of the New Deal.

As we now contemplate what a return to normal will look like, we need to face whether it will merely shore up old unfairness and maintain a ripped safety net, leaving the sick, the uninsured, the homeless, the unemployed, and the furloughed to mostly fend for themselves.

Harding also promised a return to a more normal politics and a restored government “under which a citizenship seeks what it may do for the government rather than what the government may do for individuals,” as he said in Boston. “No government,” he added, “is worthy of the name which is directed by influence on the one hand, or moved by intimidation on the other.” It is depressing to see this, today, as a lofty ambition rather than a statement of what ought to be obvious.

Good government aims and claims notwithstanding, Harding would ultimately be known mostly for the criminality that occurred in his administration. The Teapot Dome scandal was the highest level of government lawbreaking before Watergate, and it all took place right under his nose, within his cabinet. The scandal—which involved leases to pump oil in California and at the Teapot Dome in Wyoming—put men in prison but, more importantly, crumpled people’s faith in leaders and government.

It’s significant today that Teapot Dome scandal was about oil, already a booming business then and one that would only grow, making America—and more than a few Americans—significantly richer, while dirtying the environment for billions of people around the world. During this time of COVID-19, as we marvel at the cleaner air and the animals reclaiming space after we retreated into our homes, do we really want to return to our cars and the petroleum-rich version of American normalcy?

Today, we look backward, to technological changes of the past, and wish for greater and faster innovation. In Harding’s time, radio and communications technologies arrived with great promises of easier and cheaper connection, much as Zoom suggests new ways of being together now. But by the end of the decade—and from then on—the technology enabled a wave of populist demagogues who saw the chance for audience and influence both, and took it. Where will the technologies that promise us community today lead us, if we’re not sufficiently wary of them?

It’s striking how well Harding recognized the ways that war and disease had exposed America’s problems with equality. To his credit, he advanced plans for racial equity, but they foundered. And in retrospect it seems obvious that getting back to normalcy for some Americans meant keeping the color line sharply drawn. Similarly, today COVID shows us the inequalities we considered “normal” just three months ago, and demonstrates how easily we labeled some workers essential and some not—and how those labels are resulting in higher death rates.

For Harding, normalcy and restoration also meant a retreat from the world, and from seeking to end war elsewhere, so that we could think of America first. “Let us stop to consider that tranquility at home is more precious than peace abroad,” he said in that same speech. But retreat did not spare us or spare the world, as the 1920s saw forces rise in Europe and Asia that would draw the United States into a Second World War.

The lesson from Harding’s time is that “going back to normal” is not safe; it’s actually dangerous.

In that long list of sober virtues from that May 1920 speech, Warren Harding also offered “equipoise,” which is hardly a conventional political promise. Equipoise—defined by Merriam-Webster as a state of equilibrium—may have its attractions to people recovering from years of death. But equilibrium, and the return to a status quo at the expense of experimentation, also means giving in to passivity.

As we think ahead, we can do better. Let’s put normalcy at least off to the side, as we try to find our way out of all this.