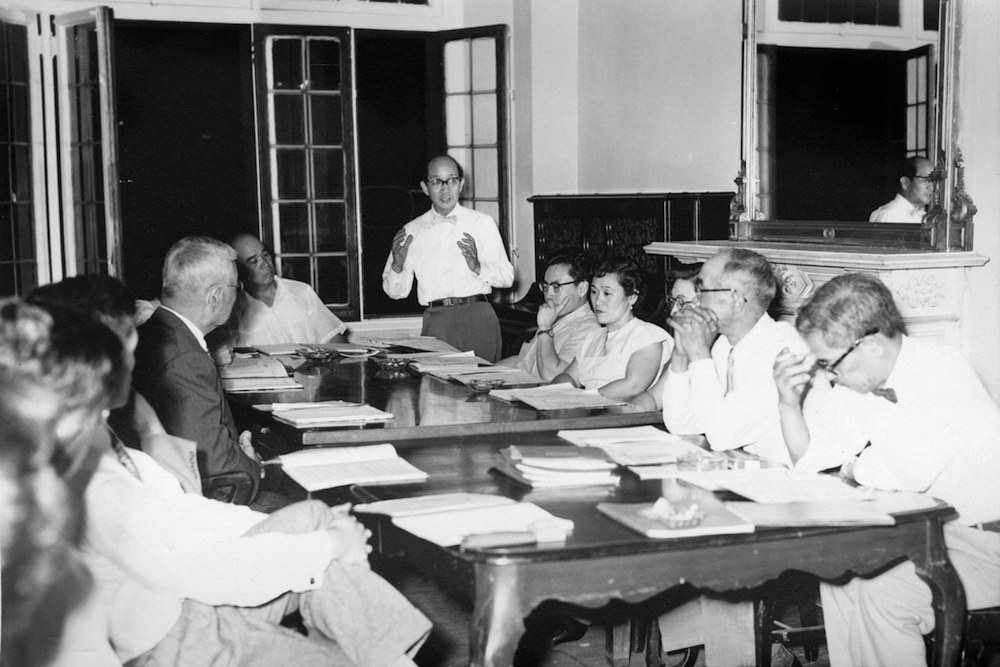 Chicago Resettlers Committee executive director Kenji Nakane stands at the end of the table during an early board meeting of the CRC in 1954, nearly 10 years after the CRC was founded. Courtesy of the Japanese American Service Committee Records, RG 10.

In March 1943, Kaye Kimura left the “Manzanar War Relocation Center” in California and boarded the same train that had brought her there in 1942, when President Franklin D. Roosevelt had sent 120,000 Japanese Americans to wartime prisons.

During her first trip on the train, Kimura had ridden with the windows closed and the shades down, by order of the military. This time, as a parolee and not a prisoner, she was allowed to gaze at the world beyond.

Kimura, just 28 years old, was headed to Chicago with urgent matters on her mind. Her government jailors, the War Relocation Authority (WRA), had just issued a “work leave” policy, an official permission slip for her to live “normally” on the outside, but only if she could find—and hold—full-time employment. She needed a job to remain free, and the strangeness of her predicament weighed on her.

Later in life, Kimura (not her real name) described having a “marked feeling of self-consciousness” as she rode the train, which was packed with American G.I.s riding to and from military bases. The soldiers turned out to be open and friendly, but the experience still jarred. “I thought everybody was looking at me,” Kimura told an interviewer. She braced herself for “some sort of unpleasantness.” That train ride was her route out of formal wartime imprisonment, but Kimura’s war wasn’t over—and wouldn’t end for some time.

The story of the incarceration of people of Japanese heritage is a familiar one. After the Pearl Harbor bombing in 1941, U.S. officials stoked a racial hysteria in which Japanese Americans were defined as an internal enemy loyal to Japan, and thus a wartime national security risk. Government agents rounded up Japanese Americans and shipped them to prisons in California, Idaho, Utah, Wyoming, Colorado, Arizona, and Arkansas, and if we include those detained as “leaders,” then the captivity geography extends to even more states. Japanese American families lived in crowded, spartan, temporary quarters that they sometimes had to finish building themselves, so hastily and poorly planned was the forced evacuation. They spent much of the war as captives.

But what happened to the prisoners next—when people like Kimura had to forge new lives in unseen, far-flung corners of the country—is also an important American war story, and one many of us haven’t heard. These smaller stories—of train rides, job searches, and apartment hunting in new cities—complicate narratives of war and national identity.

The WRA called Kimura a “resettler,” but she was a refugee, really. President Roosevelt’s Executive Order 9066, signed in February 1942, had empowered the military to remove Japanese Americans from much of the West Coast and even part of Arizona. It remained in effect until the end of the war—so by law, work leave applicants like Kimura could not go home. They could go East, though, so WRA officials pointed work-seekers to Chicago—a place where jobs were plentiful, and Japanese Americans might ride out the war in urban anonymity, under “a cloak of indifference,” as a WRA study put it.

Japanese Americans in Chicago, even under constant watch, were able to build a Midwestern, urban Asian American community—absent before the war, made by its malice. When World War II ended, however, their recovery continued to be encumbered by the race-based mass detention and relocations they had endured: burdens no other Americans shared.

In January 1943, the WRA opened its first “field office” in Chicago. At least 20,000 Japanese Americans migrated there between 1943 and 1950. Kimura was part of a Nisei vanguard, a wave of young, single migrants, first men and eventually young women, who would test the waters and lay the financial groundwork to bring parents, grandparents, and younger siblings along.

Kimura left Manzanar at the same time as about a dozen others, and she had mixed feelings: She was scared and worried about leaving her family, but she was eager, even excited, to see what a big city could offer. Stories of anti-Japanese violence circulated in every camp, and while no one would have called an American city “safe,” Chicago was at least “a safer bet,” according to Shotaro Frank Miyamoto, a Japanese American from Seattle who was forcibly relocated to the Puyallup camp, and later became a scholar of the Chicago resettlement.

Once they survived the train trip, Japanese Americans had to navigate the city. They had to report directly to the WRA’s Chicago office, register, and start searching for a job and a place to live. When they found both, they had to relay that information back to the office; if they ever changed jobs or residences, they had to report that, too. The WRA had the right to call anyone back to camp, at any point, for what it deemed “sufficient reason,” a security phrase just as nebulous and arbitrary as the rationale for incarceration. Chicago’s new Japanese American residents were not in captivity but they were still in custody.

It was not easy to rebuild community in such circumstances, and despite WRA assurances about Chicago’s friendliness, Japanese Americans described a mixed reception. They could rely on Japanese American mutual aid groups and some white allies, but relocating was often frightening and frustrating.

Chicago was a big, noisy place, made even bigger by the bustle of war. It was a hard place to make home, especially because the WRA directed Japanese American refugees to disperse once they got off the train. WRA director Dillon S. Myer warned against the creation of a “Little Tokyo” in the city. He envisioned a postwar multiculturalism where races mingled at work and at play, but his racial liberalism was myopic, and ignorant of the trauma of forced removal.

West Coast Japanese Americans had to figure out the Midwestern city’s racial maps, informal borders, and unwritten rules on their own. When they knocked on a door of a building with a “for rent” sign, some got flat-out refusals—“no Japs!”—while others encountered clumsy dodges: the apartment was already taken, and the landlord had merely forgotten to remove the sign. Sometimes refugees found acceptance, based on a racial stereotype that they would be compliant, quiet, and clean tenants. There is some evidence that white Chicagoans of German origin—with memories of their own vilification during World War I—were willing to rent to refugees, to broker a wartime racial accord even if only as landlord and tenant. 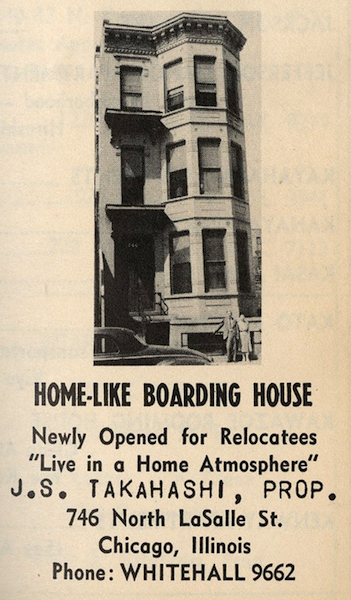 Resettlers could live only where rents were low and tolerance high. Like many young Nisei, Kimura landed first in a Chicago hostel, one of the few in the city run by religious groups who offered early housing assistance to refugees. Hostels were filled to capacity with migrants, so Kimura quickly left to room with a girlfriend elsewhere in the city. When her siblings applied to leave Manzanar too, she searched for a larger apartment that might also accommodate her parents and other relatives, whom she thought would follow. Each inquiry with a potential landlord felt like an audition. Kimura described the hunt as “the hardest thing I ever did in my life,” a remarkable statement from someone who had just left a concentration camp. After several refusals, which “might be racial discrimination, but I wasn’t sure,” she found a run-down building that lacked every basic amenity, but had enough flats to accommodate her family. As Kimura later described it, “our return to normal life was in cramped quarters and it was hard.” When she compared notes with other resettler families, she realized they all had suffered in the same way.

Despite the counsel to disperse, in the end, Kimura and other resettlers did exactly what so many racial and ethnic groups in the U.S. had done before them: They huddled and leaned on each other. They bought apartment buildings, grocery stores, restaurants, dry cleaners, beauty parlors, and flower shops. Told to scatter by the WRA, they instead formed their own urban villages in different parts of Chicago. The agency was uneasy about this racial concentration, but it nevertheless cheered Japanese American entrepreneurialism. The Chicago field office was set up only to launch Japanese Americans, not to sustain them.

Indeed, the WRA was more concerned about Japanese Americans’ long-term financial dependency than their threat to national security. WRA documents from the period maintain an almost singular focus on getting detainees back to self-sufficiency. Myer called the Japanese American incarceration “the problem of caring,” a bizarre phrase which belies the cruelty of the policy but reveals much about a growing realization that putting people in wartime custody might foster postwar dependency. How long would it take Japanese Americans to resume, in Myer’s words, a “useful American life with all possible speed”? Was the government now obligated to “care” for a population it had removed from its sources of income and wealth? The work leave policy seemed a good solution, for it both compelled and enabled Japanese Americans to fund their own recovery—the American way—and it reassured the cities receiving refugees that they “would not become public charges” in peacetime.

But there were inconsistencies and inequalities in the approach. The WRA admonished young workers like Kimura to keep the first job they found instead of shopping the market for higher pay, a free-market right celebrated as fundamentally American during wartime. Initially praised as “industrious and intelligent workers,” Japanese Americans were later accused by Chicago’s WRA director of being ungrateful and lazy when they defied unfair conditions or quit to take a better job. Some employers even began to call them “60-day Japs” to lament their labor mobility.

Japanese Americans in Chicago, even under constant watch, were able to build a Midwestern, urban Asian American community—absent before the war, made by its malice. When World War II ended, however, their recovery continued to be encumbered by the race-based mass detention and relocations they had endured: burdens no other Americans shared. For Japanese Americans, peace was not a date, it was a process. Indeed, it wasn’t really clear when hostilities ended and peace began. Did the war end when they left camp for a job? When formal evacuation orders lifted in 1944? On VJ-Day in 1945? Or when the final WRA camp closed in 1946? Some Japanese Americans who settled in Chicago said the war didn’t feel “over” to them until they were able to buy their first homes in the suburbs, in the early 60s.

Novelist and literary scholar Viet Thanh Nguyen notes that “all wars are fought twice, the first time on the battlefield, the second time in memory.” As we mark the 75th anniversary of World War II’s end this year, we have another chance to remember not only the war but the postwar stories of Americans like Kaye Kimura—stories that lay bare how some of World War II’s citizens sacrificed and lost, not for their country but at the hands of it.