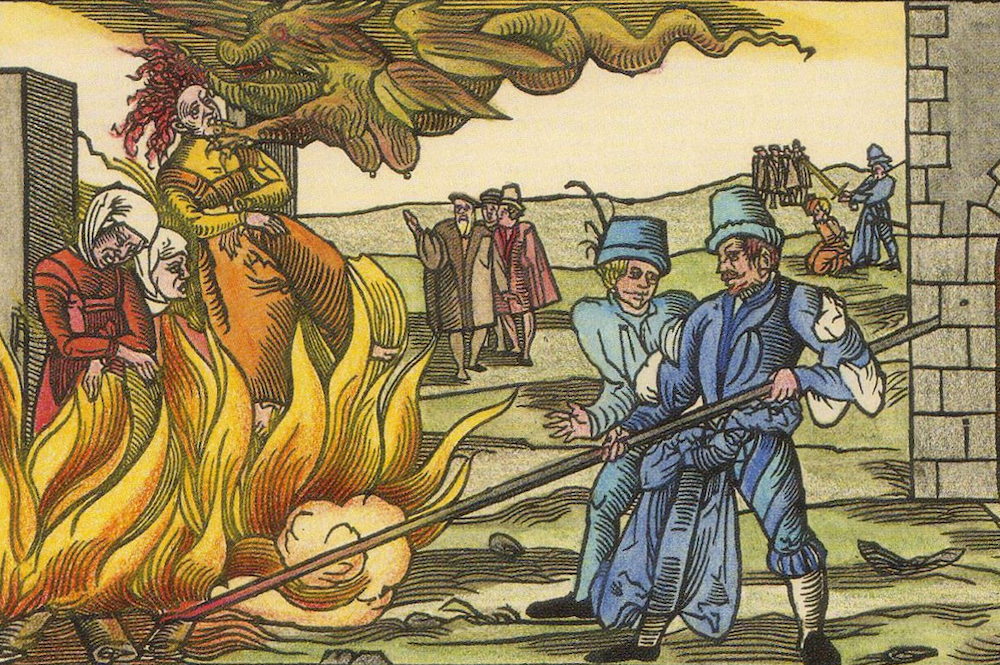 A witch trial in Derenburg in 1555. In the 16th and 17th centuries, Germany had more witchcraft trials than anywhere else in the world. Courtesy of Wikimedia Commons.

How do societies get over years, or even decades, of being lied to? How does a society that has run on “disinformation” exit from that system?

The question has obvious contemporary relevance. Yet mass disinformation is not a new phenomenon, or even necessarily a modern one. It has historical precedents.

In Germany, the problem of widespread disinformation started with an explosive new media—namely print. When the printing press, developed in the 1450s, got humming by the 1490s, it disseminated a great deal of new knowledge. Yet this new media also spread disinformation, inflamed antagonisms, and accelerated questionable information on a number of subjects.

One such subject was anti-Semitism. In the late 15th century, the printed word and image aided and abetted a rise in anti-Jewish sentiment, when false accusations of Jews performing ritual murder were printed and circulated. That resulted in a rash of violent expulsions of Jews from a number of cities and territories in the German lands.

Another example is the charge of witchcraft. Germany, the “motherland of witchcraft accusations,” boasted more witchcraft trials than anywhere else in the 16th and 17th centuries. Printed books told people what witches looked like and how to spot one. They brought word and image together, and persuasively propagated prejudice, mainly directed against women.

This disinformation cycle accelerated, as the witch craze was soon overlaid by the destructive Thirty Years War (1618-1648)—its fury likewise fanned by the printed word and image. The resulting violence, along with hunger and the plague, depleted the population of Germany by anywhere from one-third to one-half, catapulting the country back from the mid-17th century to the late 15th, the very early days of print.

History, the German case demonstrates, can indeed roll backward, and massive disinformation is one of its catalysts.

Another, more modern example, comes from the First World War. The German High Command both controlled the media and censored it, with the result that many Germans didn’t realize the magnitude of the systematic slaughter happening on the western front.

Then, as the war dragged on, two camps emerged. One wanted a negotiated peace to end the decimation of a whole generation of young men. Another wanted to press on to a victorious peace, turning a blind eye to the horrendous dimensions of the carnage. This second camp also downplayed the importance of the American entry into the war, and initiated the infamous “Jew Count” of October 1916, insinuating falsely that Jews were not doing their share for the larger fight.

Even when the war was over and lost, and censorship lifted, this cycle of disinformation did not end. Though the Weimar Republic enjoyed freedom of the free press and guarantees of free speech, disinformation abounded—often in the form of lies, with the most damaging being that Germany had been on the verge of victory in the war when democrats, communists, and Jews stabbed the country in the back. This was a complete falsehood. The German Army was not on the verge of victory.

On the contrary, it faced numerically superior enemy forces and endured a massive “hidden military strike” that ordinary Germans, because of censorship, did not know about. And when Germany was finally vanquished in November 1918, it was one of the nation’s most boisterous and bloody-minded generals, Erich Ludendorff, who slunk away to Sweden under a false name, rather than face defeat.

Germany, the “motherland of witchcraft accusations,” boasted more witchcraft trials than anywhere else in the sixteenth and seventeenth centuries. Printed books told people what witches looked like and how to spot one. They brought word and image together, and persuasively propagated prejudice, mainly directed against women.

Disinformation allowed extreme nationalists to place the blame for defeat on their political enemies. Within a year, the balance of power shifted from a coalition that supported the republic to one that was at best ambivalent about it. In Weimar, politics became war by other means, and in Germany’s first democracy, the democrats, the socialists, and the moderates lost that fight.

There was, however, a case in German history with a different outcome—the end of World War Two. Nazi Germany was the very paradigm of a disinformation society, with party-controlled radio, press, and schools, while a whole branch of the government, under Joseph Goebbels, was devoted to propaganda. The barrage of state-supported disinformation was, moreover, made plausible by a leader who exuded political charisma, even if listening to Hitler’s shrill, bombastic rants makes it difficult to understand how anyone could ever have followed him.

To be sure, disinformation alone did not make Germans into Nazis. Part of the appeal for German citizens of Nazi ideology was the sheer seduction of success—not least the exit from the Great Depression via a massive stimulus package for public works and an even greater economic upswing driven by military spending.

There were also foreign policy attainments. Before the war, the Germans had rebuilt their army, torn apart key stipulations of the onerous Treaty of Versailles, reoccupied the Rhineland, and annexed Austria and the Sudetenland. More cynically, the regime focused the antipathy of the national community on political outsiders, especially Communists, thousands of whom the Nazis arrested and corralled into concentration camps. The regime also directed the enmity of the German people against groups deemed outside an ethnic or racial understanding of what it meant to be German: primarily Jews, but other groups as well. Finally, there was war itself. It was not embraced with the same enthusiasm in 1939 as it was in some quarters in 1914. But Germans believed they had a duty to fight for their country.

Armed with a prodigious amount of disinformation, Nazi Germany unfolded a dynamic of consensus, coercion, and broad participation in persecution the likes of which have no precise parallels in other modern societies. But here the question is simply how Germans took leave of the ideas and assumptions that led them to support National Socialism in the first place. How did they exit a society hopelessly twisted by disinformation? And how long did it take?

When the war came to an end, the shock of its loss was not enough to get Germans to disengage from their society of disinformation. “Every German knows that we are not guilty of starting the war,” one woman told the American photographer Margaret Bourke-White in 1946. With “every German,” the woman certainly exaggerated. Yet deep into the 1950s, many Germans remained convinced that Germany was not primarily responsible for the outbreak of World War II. To the direct question—“Who was, then, responsible?”—it was not until 1959 that 50 percent of Germans unequivocally said “Germany, ” and it was not until 1967 that a clear majority, 62 percent, answered in this way.

Postwar West Germany (but obviously not the east) was one of the most densely polled places on Earth at the time, so we have good information about the persistence of beliefs shaped by National Socialist disinformation. Opinion, we now know, remained sharply divided, and depending on the question and its framing, about a third of the adult population retained broadly positive attitudes toward the Third Reich. In October 1951, 40 percent still believed that the period 1933 to 1939 represented the best years of recent German history, while German attitudes toward Adolf Hitler as a statesman reflected this overall positive view. In 1952, 32 percent of the people polled thought that he was either “the greatest statesman” of the 20th century or that he was an “excellent leader of state,” who, unfortunately, had made a few mistakes.

For many Germans, it was not National Socialism but the war that took Germany in the wrong direction. Had it not been for World War II, according to 41 percent of Germans in 1959, Hitler would have been one of the world’s greatest statesmen. Attitudes toward Jewish people reflected these views. “Would you say, it is better for Germany not to have any Jews in the country?” a polling Institute asked in December 1952, to which 37 percent answered in the affirmative, 24 percent were not sure, and only 20 percent answered “no.” As late as 1961, 74 percent of Germans polled concurred that Jews were of a different race. Altogether, the polls show that the German population continued to perceive Jews as the Nazis had painted them—namely as a race apart, decidedly not German, and certainly not welcome.

The results suggest sobering conclusions. In postwar Germany, 12 years of propaganda and disinformation were not undone by the defeat, the privations of war, or broader understanding of the genocide perpetrated by the Nazis. Throughout the late 1940s and well into the 1950s, roughly a third of all Germans continued to hold views powerfully shaped by the Third Reich and its propaganda. It would take several more decades for these mental templates so strongly shaped by propaganda to change. Some historians argue that the 1960s were the turning point, while others argue for the 1980s. In either case, the road out of Nazi Germany’s disinformation society was long and difficult.

And yet it was, in the end, a success. No major nation has faced its dark history with the honesty that distinguishes Germany’s engagement with its own persecutorial and murderous past. And nowadays, few nations are as easily lied to.