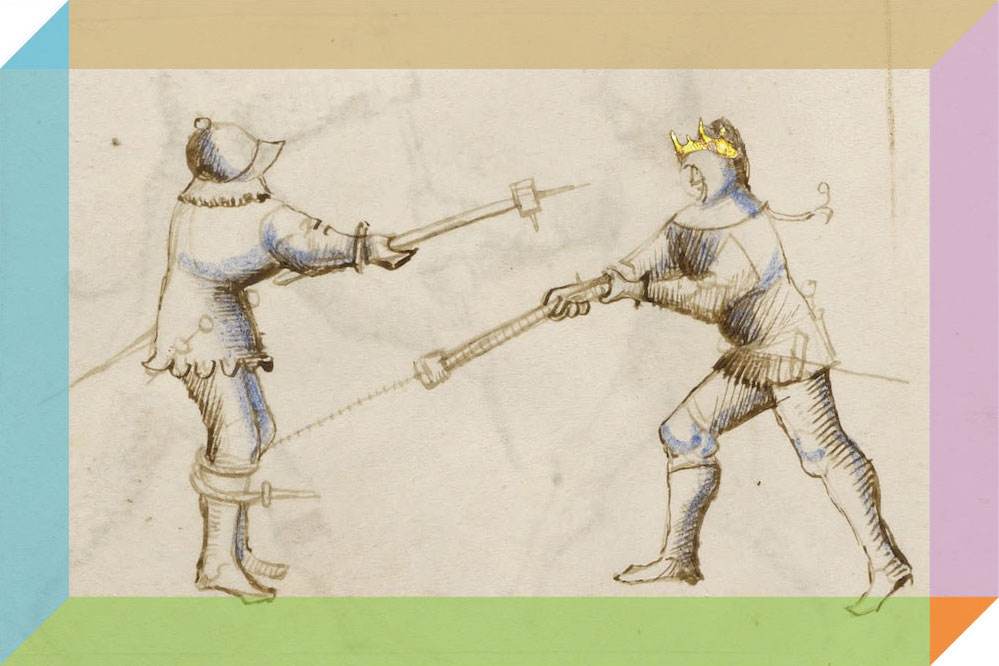 Angels asked a farm girl to take up arms against the English during the Hundred Years’ War, and Joan helped turn the tide of battle. A little red dragon traveled with a woman disguised as a man to successfully fight off the Huns. A high school student armed herself with wooden stakes and crossbows and battle axes to fight against all forms of demons.

Growing up on a diet of woman warrior stories, I spent years looking for ways to test myself against nonexistent foes and learning what to expect when I would finally be called upon. I wanted to run epic distances, scale dangerous mountains, navigate inhospitable environments. I wanted to fight. To prove my valor and my worth.

I never considered the vulnerability of the very thing I’d have to rely on to succeed as a warrior: my body.

When I signed up for my first sword fighting class in August 2018, I’d spent the past eight months trying to regain some confidence in my physical self. In these classes I discovered that there’s nothing like getting hit repeatedly with a heavy plastic sword to teach you that your body is more resilient than you think.

In my early 20s, I was diagnosed with my first autoimmune disease and had heart surgery to treat an aberrant electric pathway that had been causing potentially harmful arrhythmias. Afterward, I threw myself into running, then triathlons—anything that would distract me from the fear my body might break down again, to fend off the anxiety spirals.

But then I tore my meniscus, and the surgery to repair that injury exacerbated the benign heart arrhythmias that hadn’t been cured by my heart surgery years earlier. Benign suggests a minimum level of harm, but the palpitations were so incessant, occurring thousands of times a day, that I struggled to even sleep. I spent months on beta blockers to reduce the frequency of the palpitations, and only managed to get them under control after experimenting with diet and lifestyle changes.

So when I finally walked into Forteza, the historic European martial arts gym in Chicago, everything felt fragile. I didn’t trust my body not to fall apart again.

The gym, which houses normal fitness classes as well as lessons in historic weaponry, is tucked a little back from the rest of the shops and art studios on its street. Inside, the wooden-floored space might be mistaken for a ballroom, if not for the suits of armor and stands of weapons arrayed against the walls. A changing room in the back holds face masks, protective neck gear called “gorgets,” and a basket of wooden daggers. When strangers wander in for occasional open houses, the expressions are invariably the same: disbelief, bemusement, curiosity. No one expects a place like this to exist. For me, it became a place where I could reliably escape my fears that my body might break down again.

There will always be more obstacles, in the world around us and within us.

The Chicago Swordplay Guild was founded in 1999 and bases its class structure on historical manuscripts by 14th-17th century masters-at-arms. New students can choose one of two tracks to follow: armizare (the medieval ‘art of arms’) that begins with training on a two-handed longsword, or Renaissance swordsmanship, which begins with the rapier, a one-handed dueling weapon. Students in each tradition must also study wrestling and dagger in order to move forward in ranks, and to access classes in other weapons, like the spear or poleaxe. I began by studying the longsword.

When my misbehaving heart begged for attention or when my weak right leg ached, I threw myself further into my studies. As time went on, my muscles grew stronger and my mind grew more familiar with the Italian names for different guards. Dente di zenghiaro: boar’s tooth, with the hilt at my torso, sword pointing down. Posta di fenestra: window guard, the sword pointed out toward the opponent, held perpendicular to the floor at forehead height. Tutta porta di ferro: whole iron door, the sword held pointed to the ground, ready to defend or attack. Novice though I was, the movements became more fluid and familiar. And I was starting to trust myself to execute the poses. I began to believe, again, that this imperfect body might be willing to do what I wanted of it. 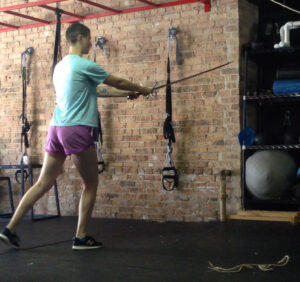 The author, training at Forteza on a day when students tried out sharp swords to cut grass mats and rope (sharp swords are never used at Forteza to practice combat techniques). Courtesy of Lorraine Boissoneault.

I trained for the next 18 months, collecting bruises on my hands and arms, gradually improving my abilities. I learned the zen-like emphasis on exhalation as you swing your weapon, what to watch for when your enemy attacks. I would fail to throw an opponent during a wrestling lesson, but I would later succeed, with satisfaction. I learned to do forward rolls and back rolls and parries and ripostes. I loved learning about the history of the art, and befriending classmates, and moving my body in a way that I’d only ever imagined. I felt like I’d found a community of people equally passionate about warriors and weapons, a place where being a strong woman wasn’t seen as intimidating or laughable. Best of all, I felt connected to my body again. The sweat, the aching muscles, the scrapes and bruises, all of it grounded me. Maybe someday I would even have the skills and confidence to fight in a tournament.

All of that work built up to the day I tested into a new rank. Off in one corner of the gym with two instructors, with several classes going on in other parts of the gym, I was asked to demonstrate my knowledge of wrestling techniques and longsword guards, to complete training exercises and properly attack and defend myself. After a jittery hour of working my body through everything I’d learned over the past year, the dean of the Chicago Swordplay Guild announced to several dozen other students that I’d moved from novice to Companion at Arms. Those with swords pounded them on the floor. Those without, cheered.

In that sweaty September morning, in a gym full of friends who’d encouraged and teachers who’d instructed, I felt proud of myself, and at peace with my body.

But two weeks after ascending into a new rank, a surgery on the wrist of my dominant hand revealed deeper problems. The strength of my muscles belied a deeper problem in my tendons and joints. Over the following eight months, my elbows, wrists, shoulders, knees, hips, and fingers began to ache and swell. Short walks became challenging; the percussive impacts of sword fighting were all but impossible, even though I’d temporarily switched to left-handed rapier to allow my right wrist more time to heal.

I’ve always known women warriors pay a price for thinking they can be as strong as men. Joan is burned at the stake. Mulan returns to a stifling domestic life. Buffy sacrifices herself repeatedly to save the world. In my quest to embody the woman warrior, I was prepared for pushback from the world. What I didn’t expect was that my body would repeatedly impose limitations. Instead of standing on trial before the patriarchy, I was once again renegotiating my alliance with my body.

Since COVID, Forteza has closed temporarily, moving to online classes that students can participate in at home. Many are doing solo drills in their backyards and sending those videos in—allowing me to still participate, vicariously. The uncertainty over what might happen next to our bodies and our society feels like a mirror for my own uncertainty. Can I be a warrior if I can no longer swing a sword? Is this episode merely a pause on my training, or a harbinger of future problems?

But that uncertainty might be the essence of being a woman warrior. There will always be more obstacles, in the world around us and within us. And we will choose, again and again, to fight, in whatever form that takes, with whatever bodies we have.