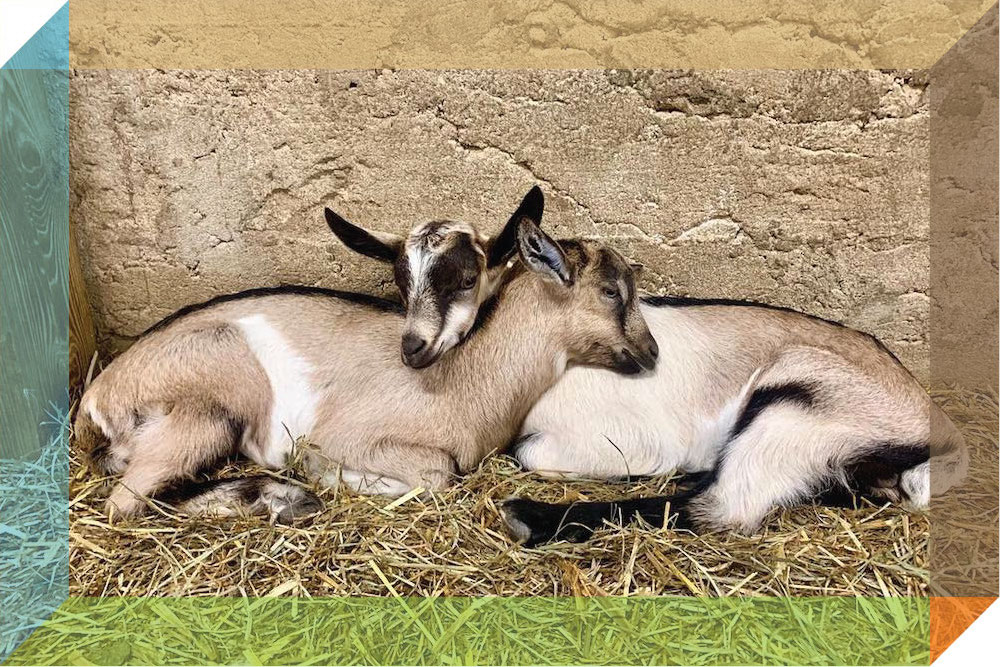 The goats of Squashville Farm. Courtesy of the author.

It happens at least once a week: The goats commit jailbreak. They nibble, squirm, and leap their way out of the two-acre space where they are supposed to stay put. Inevitably, they’ll find their way onto the deck, the driveway, the front steps, the screened porch, the bee and butterfly garden out front, and occasionally across property lines into our neighbors’ yards.

I learn of their transgressions when a nose appears near a window or a hoof pushes open the front door, or when I hear their joyous earthy bellows—or when an irate neighbor knocks.

If my husband is home, a deep groan is emitted, followed by a few swear words. A bucket will be grabbed and filled with grains. The goats will be lured back to their home. Quick and efficient, Jim will find the hole in the fencing that the goats penetrated and shore it up. It will hold—for a while.

It’s different when I am home alone. I panic for a minute. Will the goats get away? Cross the street and risk injury from a passing car? I am strong but not as strong as Jim. I fear I lack the brawn to herd them home.

And so I go and try to meet them on their terms. I lead them to areas of our yard that could use some clearing—weed, pine, brush—and do what I do best: invite them to eat.

Since 2010, I’ve lived in upstate New York, three hours north of New York City, three hours south of Montreal, and about the same distance west of Boston. In the middle of a nowhere that is close to everywhere.

Jim and I moved there after each of us had lived the better part of our adult lives in tightly packed urban environments. We met in Honolulu where I was pursuing a Ph.D. in Political Science. After I defended my dissertation, we moved to Seattle, where I had worked previously as a journalist and owned a home in an inner-city community.

Perhaps it’s the garlic, kale, carrots, salad mix, squash, corn, peas, and beans that peek out among the weeds that make our space appealing to the goats. Or maybe they just crave human company more than we do and are able to access it in a way that we, in this year of pandemic, do not dare.

It was in Seattle that we began a small garden. From its soil sprouted tomatoes, peas, cucumbers, and a desire to grow more of our own food. At the time, I was scouring job ads looking for full-time work in a market that offered very few positions for professors in the humanities. Knowing that, we had decided we would go where ever the first good prospect materialized. That turned out to be Upstate, a place where we could buy a house with a barn.

A barn. The word captured my imagination. A shelter at home, outside the house. A protected space open to creative potential.

After about five months of searching, I found a real estate ad for a house on three acres of land with a barn, rebuilt from a historic construction, golden brown, with unfinished wood.

It was on Squashville Road. I wanted to live on such a road, even before I saw the barn.

Though I was the one who wanted the barn, I had no idea what to do with it. It was Jim who had ideas.

Let’s get chickens, he would say.
No, I’d reply. They smell.
We’ll have our own eggs.
I don’t like eggs that much.
How about goats?
What???
Goat milk, goat cheese, goat meat.
You’re out of your mind.

Both of us agreed we wanted to keep growing vegetables. We moved in March, when thick snow coated the yard. We learned from neighbors that one of the previous residents—a teenage boy—had borrowed a small tractor and had dug out much of the backyard to create a racetrack for motorized dirt bikes. He and his friends rode for hours on that track, jumping over hills, veering sharply for turns, emitting exhaust, and dripping gas.

When the snow melted, we went out to inspect the land. The soil was dead.

We spent the spring and summer (and hundreds of dollars) in Year One pouring bags of topsoil and ordering dump trucks of sheep manure into the track. Our neighbors told us nothing would grow. But farmers who we were getting to know told us a different story: Things would grow if we helped the land regenerate. The best way to do that was by raising animals and making them a part of the vegetable garden’s system of crop rotation.

And so the animals arrived.

Four hens in the spring of Year Two, followed by four more and a rooster that fall.

In Year Four, baby chicks that we raised for meat, and two goats.

It will be all right, Jim assured me, knowing how I felt about goats: They were sweet, fun, and playful—so long as they were someone else’s responsibility. I enjoyed visiting other farms, cuddling other people’s goats, but was happy to then return to my goat-less home.

But weeds had filled our back yard, and a fellow farmer, Liza, told me goats would chomp them down. She suggested we buy two of her bucklings and raise them through the summer. Once the weeds were gone, she told me, we could have a freezer full of meat to last through the winter.

I agreed to give them a try.

Liza and her husband, Dave, brought the goats to our house in their Subaru sedan. They jumped out of the car like puppies, as Dave put them on leashes.

It didn’t take me long to be captivated by the goats, whom we named Siena and Ebon for the colors in their coats. Ebon, short for Ebony, had also been the name of my first cat as a young adult. After a month of bottle feeding, they were weaned and began working on the weeds. When six months had passed we said many prayers and drove them to a processor to say goodbye.

The following spring, the farmers sold us five kids, two of whom were does: Mary Helen and Jodi-Goat, named after Navy buddies of Jim’s. Five years later, these two are the matriarchs of a herd that ranges between seven and 30 goats.

The goats’ space is separate from ours. Their job is to clear their area—lush with grasses, brush, and fast-growing invasive pine—so that we can plant vegetables. But our space—full of lumber, firewood, our rustic 1840s house, and gardens—also intrigues them. Perhaps it’s the garlic, kale, carrots, salad mix, squash, corn, peas, and beans that peek out among the weeds that make our space appealing to the goats. Or maybe they just crave human company more than we do and are able to access it in a way that we, in this year of pandemic, do not dare.

When they visit, hopping the wire fencing held in place with movable T-posts, they often nuzzle playfully against an arm, a leg, a sweatshirt. They place their hooves on my thighs and leap up to grab a clump of hair. That hurts, but I’ve found myself drawn to them all the same. I watch as they race as a herd into the woods behind our home, take turns leaping over compost piles and a defunct milk shed. Their unruly behavior speaks to the side of me that’s always hungered for something more—soil and self-determination. It’s perhaps the reason I had wanted a barn in the first place. Somewhere I could grow my own food to eat and share—and have animals who could help me see a world greater than individual pursuits for material success.

This spring, our 11 does gave birth to 19 kids: Pascha, Salty, Stormy, Lucy, Luna, Rock Hudson, Crystal Gayle, Amethyst, Winkin’ Blinkin’, Nod, Rose, Petal, Daffodil, Lilly, Andy, Jess, Joan, and Sweet One—a runt who sadly died because she could not figure out how to suckle milk from her mother’s teats or from a bottle. We lost one doe, Flower, in childbirth, but pledged to keep her children Rose and Petal. Rose—a male—might be a future sire, along with Daffodil, who was born at about 3 a.m. on Easter Sunday.

When the kids are weaned, we will start milking the does to enjoy their milk, yogurt, and cheese for ourselves. In late summer, we will once more say many prayers as Jim makes that still difficult journey to the butcher.

We began selling eggs and vegetables at a small farmers’ market five years ago. Now, we participate in two of our region’s largest markets. Eggs, poultry, and goat meat are in high demand, particularly as shortages mount in grocery stores, and we are slowly gaining a reputation for the high quality of our foods. State regulations make it prohibitive for small farmers like ourselves to sell milk and dairy products commercially, but we dream of doing so one day.

When I am home alone and the goats get out now, I’ve come to accept that it will soon be time for us to get out, too. Over nine years, Squashville Road has taken a suburban turn, and in so doing, our farm has come to be seen not as pastoral, not as a source of food, but rather as a blight and threat to property values in the area. In the pandemic, we are making plans to move, to grow our farm in a more welcoming space, one county over.

The goats will have a red barn soon, and much more space to roam.

Their space and mine.