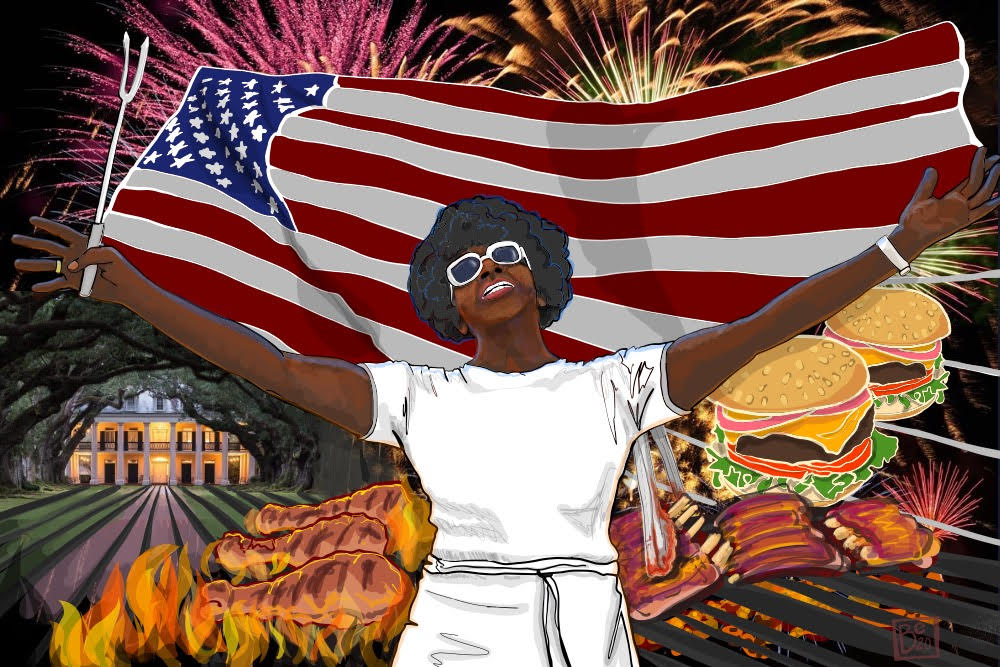 Dearly beloved, we are gathered in this moment to celebrate the culinary union of barbecue (a.k.a. barbeque, bar-b-que, bar-b-q, and BBQ) and Independence Day (a.k.a. July 4 or “the Fourth of July”). This moment is a culmination of the Founding Fathers generation’s need for the right to party.

In the early history of our republic, Independence Day was often the biggest community festival of the year. Barbecue, which developed as a new, fusion cuisine well-suited for festive occasions by the late 1600s and early 1700s, became the ultimate party food during the period when Fourth of July celebrations gained civic and social momentum. The two have been linked up ever since.

Barbecue, of course, was a thing long before the British colonists ever thought about declaring independence from their sovereign. I’m not talking about hamburgers and hot dogs on a kettle grill. I’m talking about “old school” barbecue, where a whole animal carcass was skewered with wooden poles and cooked over a trench filled with burning coals from hardwood trees. Pre-20th century, African Americans typically did the labor-intensive cooking. They used the piercing poles to flip the carcasses periodically and seasoned the meat by basting it with a sauce primarily made of vinegar and red pepper. Today, we tend to fall into stereotypes about which meat authentically represents the barbecue of a region, but back then, anything could go over the pit regardless of geography. Cows, pigs, sheep, and even opossum were the most common.

In the American South, the ideal setting for a barbecue was a rural open space with beautiful trees and a spring nearby. In between plates of food, people would play games, get their drink on, and shoot guns. Barbecues were originally social get-togethers for family and friends, but eventually any life event, like a funeral or a wedding, was an excuse for a barbecue. By the late 1700s, barbecue was already a cooking process (verb), a descriptor for a kind of cooked meat (adjective), and a form of entertainment (noun). All three were very much a part of social life in the American South, especially in Virginia.

Barbecue’s backstory is rooted in the culinary traditions of the Indigenous people who lived in what would later be called “North America” after European contact. Historian Joseph Haynes shows in his well-researched book Virginia Barbecue that British settlers in the Virginia colony melded their meat-cooking techniques with the meat-smoking techniques of the Powhatans who lived in that area. Barbecue, as we understand it today, was born. As Virginians migrated to, and settled in, other parts of the American South, they took barbecue with them.

In the Northern colonies, British cooks didn’t quickly embrace the barbecue their counterparts developed in Virginia. Northern cooks often stuck to what they knew: the “ox roast.” This festive tradition in England dates to the Middle Ages. With this method, the ox carcass was pierced with a metal rod and cooked evenly before a fire, with a team of cooks slowly rotating the spit from each side. It was also a good way to feed a good-sized crowd, so the Northern colonists’ attitude was, “If it ain’t broke, don’t fix it.”

Back then, anything could go over the pit regardless of geography. Cows, pigs, sheep, and even opossum were the most common.

Though some July 4th celebrations featured an ox roast, southern-style barbecue became the favorite meal. Thousands of Philadelphians ate thousands of pounds of barbecued beef and lamb after a July 4, 1788, procession through the city. Thomas Jefferson hosted a barbecue dinner in Paris for expatriate Americans on July 4, 1789, shortly before the French Revolution. On July 4, 1791, Joseph Ingraham, captain of the Hope, a fur trading vessel, barbecued a 70-pound hog for his crew on the beach of Washington Island in the Pacific Northwest.

On the mainland, Independence Day celebrations shared common elements: a military procession, a reading of the Declaration of Independence in its entirety, speeches by local politicians, toasts to local and federal dignitaries, music, fireworks, and a free meal for the masses—which was usually barbecue. These celebrations drew several thousand spectators, and barbecue was well-suited to meet their needs because it was scalable.

These events were usually hosted by prominent white men who covered all of the costs. These men secured the land where the event was held, procured all of the meat used (often this was donated), bought other supplies, and hired the workers. In many cases though, enslaved African Americans did the work of clearing the land, preparing the food and serving it to guests. These large and scalable barbecues could happen anywhere. It was a moveable feast that fed not just thousands of people, but tens of thousands of people. Typically, whites ate first, and the African Americans present ate afterward.

There were some key reasons why hosts might have preferred barbecue to an ox roast. Given the lack of refrigeration, the animals meant for a barbecue were kept alive until shortly before the event. Thus, smaller animals like pigs and sheep were easier to transport, butcher, and cook than a large ox. Also, the ox roast relied on heavy equipment that included metal and bricks. It’s a lot easier to just dig a really long trench for barbecue than it is to lug around and assemble what’s needed for an ox roast.

The final key factor that tied barbecue to Independence Day celebrations in the South was the key role of enslaved African Americans in preparation and cooking. For some whites, what distinguished a barbecue from a bunch of adequately cooked meat seemed to be the involvement of African Americans. In 1919, John Bell Keeble, while serving as the dean of Vanderbilt Law School, validated this sentiment when he addressed a national convention of architects who had gathered in Nashville, Tennessee: “Some things have always been typical of a Tennessee welcome. Some you will get, and some you will not get. A barbecue was one of them. I do not know whether altogether we have lost the art or not. So many of the old negro barbecue cooks are dead that a barbecue is a rather difficult matter to bring up to the old-fashioned standard.”

After the Civil War, Southern whites who supported the Confederacy harbored sore feelings about being on the losing side. Independence Day celebrations in the South dropped off because they reminded white rebels of their defeat. Some commentators feared that the holiday would disappear altogether in the American South. In 1874, the Louisiana Democrat editorialized, “[T]he glorious Fourth of July has come again and gone again, unhonored, unsung.”

But African Americans in the region continued to vigorously celebrate Independence Day with barbecue and fried chicken. In 1901, the Atlanta Constitution newspaper reported, “[T]he [Fourth of July] is here, as in most places in the south, given over to the negroes, who celebrate [it] in truly royal fashion.” By the 1920s, Southern whites were back to hosting civic celebrations of Independence Day.

The traditional gargantuan Independence Day festivities downsized in the 20th century in two significant ways. First, as Adam Criblez points out in his book Parading Patriotism, after the Civil War, people lost their appetite for huge gatherings and many opted to attend smaller gatherings or family events. Due to higher meat prices and having to pay actual wages for labor, as well as the logistics of pulling off such huge events, more and more communities shifted to smaller events—and they started charging people to attend in order to recoup their costs. These events still got a sizable number of attendees, sometimes numbering in the thousands, but they just weren’t on the scale of the massive feeds that had frequently taken place a century before.

Second, barbecue changed in the 20th century as well. The trench method fell out of fashion as cooks shifted to using brick-lined pits and cooking smaller cuts of meat. The brick pits allowed barbecuers to control more variables during the cooking process. And in urban environments, digging a hole would have been impractical or against health codes. Cooking smaller cuts of meat is also easier and less labor-intensive than cooking a whole animal. By the 1920s, more people were eating barbecue in restaurants or building barbecue pits in their back yards, paving the way for the kettle grills that would explode in popularity during the 1950s. Over the century, the connection between barbecue and Independence Day stayed in our national consciousness, but the meal itself moved from civic spaces to public parks and private homes.

There’s a lot more to the story of barbecue, much of it hotly contested: African methods of cooking meat outdoors and whether they did or didn’t influence American cooks, the various types of sauce, regional differences in the American South, and much more. Thanks to technological innovation, barbecue can now happen almost anywhere, and cooks feel free to throw anything on the grill. Yes, this includes hamburgers and hot dogs. That’s all right. Though I have my purist tendencies, I’m fine with barbecue reflecting a “melting pit” of food traditions. My own Fourth of July plate is usually piled high with pork spareribs, hot link sausages, chicken, baked beans, coleslaw, an ear of grilled corn, potato salad, and a nice, ripe wedge of watermelon for dessert.

For me, it’s about celebrating with friends, family, and loved ones. It’s also a chance to pause and reflect on what it means to “celebrate” a nation that still falls short of its promise, but one that I call home. I live in the country that I love, and I want it to be better. Perhaps having diverse people sitting at a table and enjoying barbecue in all of its glorious forms, even kosher and “vegan,” and respectfully discussing the issues of the day can be a first step to a more perfect union. When it comes to barbecue and the Fourth of July, what pitmasters and politicians have beautifully joined together, let no one pull asunder!