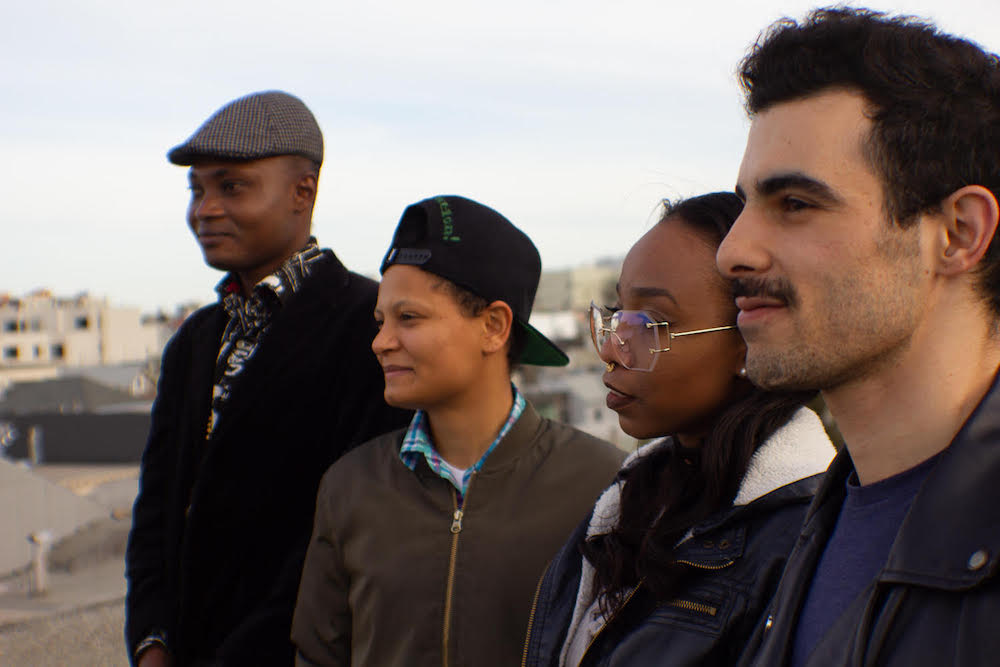 Early one morning in 2012, Subhi Nahas woke up in a hospital bed near Idlib, Syria. The bright, boyishly handsome 22-year-old couldn’t remember how he’d gotten there. The day before, his father had slammed Nahas’s head into the kitchen counter so hard that he had to be carried to the emergency room.

Around this time, a militia group called the Nusra Front, with ties to al-Qaida, had formed near Nahas’s town. He had heard rumors that they’d kidnapped and killed several gay men.

Nahas, who had near perfect grades in his third year of college, stopped going to school, fearful that his soft voice and gentle gestures might reveal what he’d kept secret his whole life. Since the war’s beginning earlier that year, friends he’d known since grade school were beginning to affiliate with extremist groups. He spent most days and nights in his bedroom—never expecting violence at the hands of his own family. But his father, an affluent contractor with close ties to the Assad government, saw his son’s effeminacy as an affront to their family’s honor.

In the hospital, Nahas made a decision that would change the course of his life: Despite huge risks, he would flee to Lebanon, nearly 15 hours away by road. Scraping together bills and coins, he bribed a taxi driver to take him to the border and pretend that his passenger was mute. At each checkpoint, Nahas sat paralyzed in silence, fearing guards would see through the ruse, interrogate him, and return him to Idlib. Or worse.

His plan worked. He made it to Beirut, then Turkey, where he applied for refugee status with the United Nations High Commission for Refugees. Nearly two and a half years later, he boarded a plane to San Francisco to begin a new life.

Between World War II and the election of Donald Trump in 2016, the United States resettled more refugees than any other country in the world. In 2013, for the first time, the U.S. began concerted efforts to resettle people persecuted due to sexual orientation and gender identity. Hillary Clinton’s State Department, via the Department of Health and Human Services, issued its first major grant to help resettle queer refugees to an agency in the San Francisco Bay Area, Jewish Family and Community Services—East Bay.

I met Nahas at JFCS, where I was volunteering while producing a documentary about dislocated queer immigrants. As horrific as his account sounded, I quickly learned that nearly all queer refugees experience trauma, if not torture. As LGBTQ civil rights and marriage equality were accelerating quickly in many western countries, being gay or transgender in many parts of the world had become a hostile proposition. Anti-queer violence and state-sanctioned homophobia was on the rise, especially in countries in Africa and the Middle East. To this day, it’s illegal in 70 countries to be gay or lesbian; seven of these punish homosexuality with the death penalty.

In the early days of my research, I couldn’t have told you the difference between a refugee and asylum seeker, or how refugee resettlement works. Refugees get their asylum or “refugee status” conferred outside of the United States through the U.N. High Commissioner for Refugees. Once approved and vetted by Homeland Security, they are assigned to cities with refugee resettlement agencies who receive federal money to help them integrate into American society. Part of this support includes small living stipends, food stamps, and basic medical insurance. Asylum seekers, on the other hand, are people who have already made their way into the United States, often on student or tourist visas, and then must present their case before immigration courts; they receive no benefits while they wait for a ruling.

From 2013 to 2016, as LGBTQ people fleeing persecution began to find refuge in the United States, the effort to integrate them was made more complicated by the fact that refugee resettlement is traditionally predicated on families: A family flees a war-torn region of the world and is resettled in an American locale connected to a community of its diaspora. An Iraqi family resettling in the Bay Area might be introduced to local mosques, grocery stores, or community centers of other Iraqis and Iraqi Americans.

Most LGBTQ refugees are not fleeing with families; they’re often fleeing from families. So a gay or trans Iraqi arriving in San Francisco might prefer to see anybody but other Iraqis. This conundrum leaves LGBTQ refugees isolated and at much higher risk, according to researchers, for post-traumatic stress disorder, depression, and what is called “internal displacement.”

“Internal displacement”: I learned this phrase while working closely with Junior Mayema, another client at the agency where I volunteered. A gay man from the Democratic Republic of the Congo (DRC), Mayema had fled repeated harassment in Kinshasa, then faced anti-gay police brutality in Cape Town, South Africa, before receiving refugee papers to resettle in San Francisco. He, too, had dreamed of America’s queer sanctuary, hoping for community, stability, and perhaps even a new love in his life. But in the first year I knew him, over many hours of filming, I witnessed Mayema experience anything but stability: moving more than 10 times in as many months, couch-surfing his way through the San Francisco Bay Area, and relying on strangers, sometimes older benefactors, for support.

It might have seemed noble to help LGBTQ refugees resettle in San Francisco, with its immigrant friendly policies and a culture steeped in queer liberation. But try living on a monthly refugee benefit of $350 in one of the world’s most expensive cities.

It might have seemed noble to help LGBTQ refugees resettle in San Francisco, with its immigrant-friendly policies and a culture steeped in queer liberation. But the Obama administration forgot one basic reality: Try living on a monthly refugee benefit of $350 in one of the world’s most expensive cities. For someone whose life was fraught with trauma and the precariousness of major migration, repeated displacements within San Francisco meant repetition of that trauma.

There were other hurdles. Mayema, for example, is a dark-skinned, gender-nonconforming person with HIV, whose thick Congolese-French accent made his English difficult to understand. One host enthusiastically invited Mayema into her home to provide a diverse “cultural experience” for her inquisitive high school daughter—until they discovered that he drank and was often depressed. He was quickly made to pack his bags again.

For such reasons, many LGBTQ refugees find themselves isolated with few options for housing and livelihood. I met Cheyenne and Mari—a charming mid-20s couple whom I was introduced to through Melanie Nathan, director of the African Human Rights Coalition, a small organization based in San Anselmo, California. They had been successful musicians and popsicle entrepreneurs in Luanda, the capital of Angola. But neighbors had cut their electricity and water, killed their dog, and harangued them incessantly every time they left the house. Nathan recalls: “One man would come and masturbate outside their window threatening: ‘We’re coming in to rape you, to kill you… and we’re going to burn your house down.’”

Desperate to find safety, Mari convinced her mother to let the couple stay temporarily at her home. But instead of offering them refuge, Mari’s mother prepared a dinner that made them violently ill.

Unable to get to a United Nations office to apply for refugee status, Cheyenne and Mari applied for student visas and registered for a two-week English course at a language academy in San Francisco. Such visas are extremely difficult to secure for short courses, yet they’d managed to get them and book plane tickets out of Angola.

As difficult as life is for refugees, it’s doubly hard for asylum seekers. In addition to that monthly stipend of $350 for eight months, refugees receive a one-time payment of $1,100 upon arrival, medical insurance, and food stamps. Asylum seekers receive nothing. And, once in the U.S., the onus falls on asylum seekers to find an attorney and navigate a legal process that takes years. They are also unable to receive a work authorization permit until six months after filing their petition. This cruel regulation puts them in a double bind: To survive as they navigate the bureaucratic quagmire and heal from intense trauma, they either have to work under the table, legally jeopardizing their asylum case, or rely on the generosity of others.

For some LGBTQ refugees in San Francisco, it was the kindness of strangers that filled the gap. By late 2015, many individuals, often older LGBTQ retirees and members of faith communities, had begun offering housing, jobs, donations, and other assistance. Among my fellow volunteers, I found unexpected alliances forming between many older white gay Americans who had faced McCarthy-era persecution in the 1950s and present-day LGBTQ refugees. Over the course of making our film Unsettled, the numbers of queer refugees and asylum claims rose. A new and robust infrastructure to support dislocated LGBTQ people took root in San Francisco, and cities such as New York and Chicago as well.

A year after the 2016 presidential election, I called Amy Weiss, then-director of refugee services at JFCS. While donations were at an all-time high, and strategies for more effectively resettling and integrating queer refugees had greatly matured, the number of refugees allowed into the United States had fallen to a trickle under Donald Trump’s new immigration policies. Currently, the number of refugees allowed into the U.S. is at an all-time low and 80 percent less than in 2016. This closing of America has come when the world has more refugees and migrants than at any time since World War II.

Over the past few years, speaking at film festivals and events to draw attention to the plight of LGBTQ refugees, I’m often asked whether I think America’s turn toward tribalism and xenophobia will continue to pervade national discourse. It’s a fair question: Anti-immigrant rhetoric that energized Trump’s campaign has translated consistently into policies maligning and restricting immigrants of every stripe. The new migration protocols on the U.S.-Mexico border are more draconian than at any other time in recent history. Under the “remain in Mexico” policy, most Central American asylum seekers are now being denied their right to have their day in asylum court.

However, I try to remain cautiously optimistic: Back before the Trump administration, during one of our film shoots, I attended the San Francisco Pride Parade, an increasingly corporatized event to which many activists have become inured. But this time, I saw something new: Nahas, Mayema, Cheyenne, and Mari, and a dozen LGBTQ refugees were all marching together in a small contingent. Their simple handmade signs stood out among the fancy rainbow logos of corporate behemoths like Facebook and Google, even Walmart.

Not long after, Nahas was made Grand Marshal of the New York City Pride celebration and was invited by then-U.S. Ambassador to the United Nations Samantha Power to testify before the Security Council: the first time that august body heard live testimony from an openly gay person.

During that trip, Nahas and I visited the Stonewall Inn, site of the 1969 unrest that helped catalyze a national gay rights movement. We hopped on the Staten Island Ferry to catch a better glimpse of the Statue of Liberty. I couldn’t help but wonder at his journey: This self-professed shy man, whose sole strategy to survive growing up in Syria was to remain silent, was now speaking on an international stage and carrying a new banner for queer liberation.

Looking at the statue and at the Emma Lazarus poem inscribed at its base, I began to wonder, given the Trump policies: How many fewer people from the masses of tired, poor and queer we will ever get to know? And how quiet will this land be without their voices?