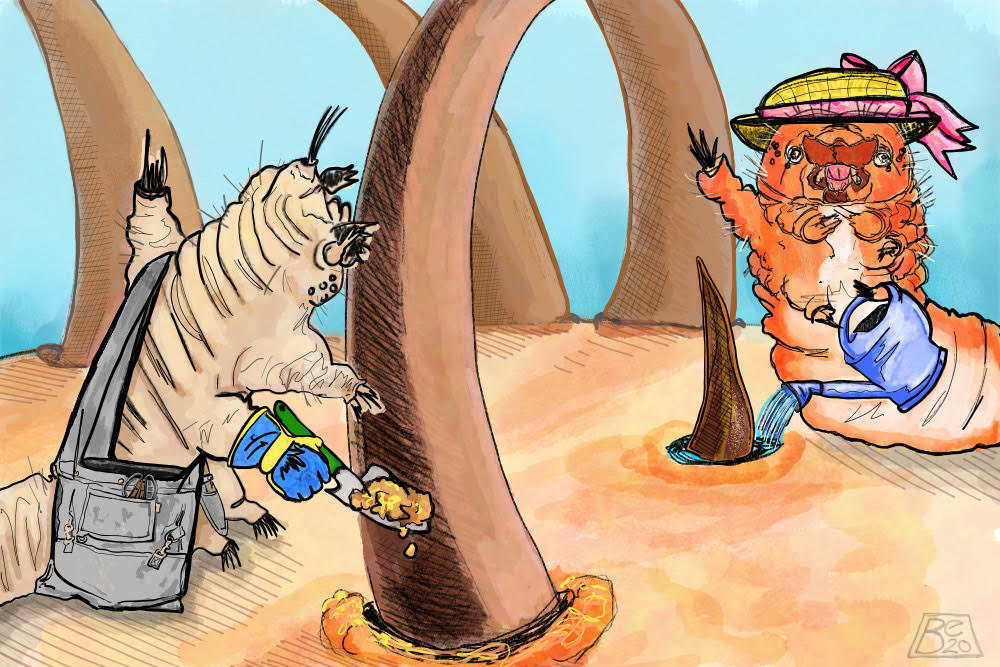 We're All Lonely Gardeners Now. Illustration by Be Boggs.

We may feel isolated now, in our homes, or apart in parks, or behind plexiglass shields in stores. But we are never alone. I’ve spent much of the last 20 years studying the many species with which we live: thousands of them, perhaps hundreds of thousands, including fungi, bacteria on our skin and in our guts, and animals ranging from the several species of Demodex mites that live in our pores to the spiders that ride with us from home to home.

In ordinary times, no person is an island. We are connected to other people through touch and words but also through the exchange of species, most benign, some even beneficial—on our bodies, in our homes, and more generally in our daily lives. These species may be bacteria, fungi, protists, and even small animals. You kiss a loved one and transfer life from your lips to their cheek, a shimmer of species.

But now we are aware that the kiss can be dangerous or even deadly. As we isolate ourselves in order to reduce the connections in the web, what happens to the whole society of viruses, bacteria, and mites that exists on and between us? What happens when each person, or at least each home, becomes an island?

This is something ecologists and evolutionary biologists have studied for several hundred years now. On islands, with enough time, some species become more common, some go extinct, and some evolve. Charles Darwin famously gained insights into the workings of evolution by considering the differences among species of birds isolated on different islands of the Galapagos archipelago. With collaborators, I have looked at similar issues in face mites and bacteria in armpits.

First, there are species that become rarer. We know from thousands of studies of fragments of forest that, as forests are cut into smaller and smaller pieces, species go extinct. For species that live on bodies, it seems likely that the fewer people who live in your home, the more likely it is for any particular body-loving species to go extinct. If it goes extinct on you, it has fewer places from which to recolonize. In normal times, species pass from one person to another, one being to another, when we touch. Roller derby players who bump into each other exchange skin bacteria. The more you bump, the more you share. But in our isolation, we bump and share with fewer people and so colonization is less likely and extinction more permanent. Indeed, this is what we hope happens with the virus that causes COVID-19: that by disconnecting from one another, we give it no island close enough to land upon.

In forest fragments, losses occur in a predictable order: Predators go extinct first, when there are too few prey. Indoors, leopard mites that eat dust mites that eat our skin as it falls from us everywhere we go are almost certainly more likely to go extinct before the dust mites themselves. So too skin or gut microbes that depend on other skin or gut microbes, the wolves of our bodily Yellowstone.

Species evolve more rapidly, as we know from studies of islands, if they have large populations and multiply rapidly. And if these populations become isolated and face different conditions, they tend to diverge. By studying the microbiome, we can see evidence of previous separations among humans. Lice species diverged genetically among populations of Paleolithic humans as they spread around the world. Similarly, I’ve collaborated with my friend and colleague Michelle Trautwein to study divergences among face mites. Of the two most common species of face mites, Demodex brevis nestles deeply in pores, while Demodex folliculorum lives more shallowly. We think that the deep dweller is less able to move among humans, spending so much of its time in its cave. As a result, it is more likely to diverge among human populations during times of separation.

That would take years or even generations in quarantine. But before that, we would expect the bacteria that live inside the mites to diverge on the island of each person. Each mite hosts a large population of rapidly multiplying bacteria in its gut microbiome. And the viruses—even more numerous and rapidly multiplying—that attack the bacteria that live inside the mites that live on your face would diverge even faster still.

We are not only “gardening” our microbes by subtracting from their web, absentmindedly weeding; we are also giving them additional new foods with our new quarantine regimes and hobbies, and lack thereof.

Now we are aware that the kiss can be dangerous or even deadly. As we isolate ourselves in order to reduce the connections in the web, what happens to the whole society of viruses, bacteria, and mites that exists on and between us? What happens when each person, or at least each home, becomes an island?

Consider, for a moment, your armpits: They have a special organ called an axillary organ, containing apocrine glands, whose sole function is to feed bacteria. These bacteria produce aromas that wick along the armpit hair (which are different from other body hair and appear to serve no function other than such “wicking”). While we don’t yet understand why the axillary organs evolved (chimpanzees and gorillas also have them), they clearly show a social relationship between primates and bacteria that is somehow about sending messages via smell to other primates.

When you wear antiperspirant, you alter the messages that your armpits send. Specifically, as a study my colleagues and I did several years ago shows, you favor fast growing, weedy Staphylococcus bacteria in your armpit that are not very stinky. Conversely, if you don’t wear antiperspirant, you favor a slow-growing, stinky, old-growth microbial community, like those found in chimpanzee and gorilla armpits—something like the redwoods of the armpit. These two communities, the weeds and the redwoods, send different messages to other people.

What those messages mean and how they are interpreted, we don’t know. We are at the step in the science in which we have discovered a language, but not decoded it. But if you are alone in your apartment and not putting on antiperspirant or deodorant, you are gardening an ancient wilderness of species similar to those found in the armpits of chimpanzees and gorillas. These species aren’t harmful and may even be beneficial, so go ahead and let them blossom.

Then there’s the relationship you may be forming with sourdough bread, which is a great deal more complex and reciprocal than it seems. Several years ago, my colleague Anne Madden and I did an experiment on sourdough starters, the microbial communities composed of bacteria and fungi that are used to leaven bread. Though all leavened breads were once produced using starters, they have a mysterious element: Where did the microbes in them come from? One possibility was that the microbes came from the bodies of the bakers themselves, as is the case with many fermented foods, like beer yeast, which comes from the bodies of wasps.

To test this hypothesis, we had bakers from around the world use the same ingredients to make a sourdough starter. We held all the ingredients constant, except for the hands of the bakers and the air in their bakeries. As it turned out, the individual bakers and/or their bakeries did have a modest effect on the microbes in their starters and thus on the flavors of the resulting bread. In other words, you can taste the baker in the bread.

But we were surprised to find that the story was more complicated than that. We swabbed the hands of the bakers (after they went about their ordinary morning ablutions) to learn what they might be contributing to the bread. Their hands were unlike those of any people yet studied. Lactic acid bacteria are key to the flavor of sourdough starters, making them acidic. In most studies, the proportion of lactic acid bacteria on peoples’ hands is small, around 3 to 6 percent. On the bakers’ hands, though, up to 70 percent of the bacteria were lactic acid bacteria. The baker’s hands also had much more yeast than the hands of other folks. In short, the bakers’ hands looked like sourdough starters. Their daily immersion in bread had changed their microbes. Sure, you could taste the baker in the bread, but the bread had also remade the baker.

The curious reciprocity between the microbial world of our foods and the microbial world of bodies also shows up in yogurt, whose bacteria are originally from human mouths and the guts of mammals. In commercial sourdough bread, the most commonly used bacteria appears to have come from the gut of a rat. Many fermented drinks around the world, such as chicha in the Amazon, rely on human body microbes for fermentation. As with sourdough, these fermentations influence our bodies, changing our microbiomes, affecting what we can digest and how we smell. We forget that we, too, are gardens.

Actual outdoor gardens also have the potential to change the species on our skin. We know from studies in Finland that children whose outdoor environments include a greater variety of plants tend to have more kinds and different kinds of bacteria on their skin, including bacteria that help to keep them healthy. Exposing yourself to the wild microbes of the garden and forest can have a big impact on your body’s wildlife, though we don’t know how much exposure it takes to make a difference. One sample of the skin of a child who grew up in the Amazon rainforest, living a hunter-gatherer lifestyle, found more kinds of skin microbes on the forearm of that child than the total number we observed in a study we did of the belly button microbes of hundreds of Americans. How much would you need to garden to achieve such an effect? I suppose the answer is a lot.

Another big player in your microbial life is your dog, with whom you may be spending more time. Whether or not you have a dog is the single biggest predictor of which bacteria are floating through the air in your house. Children who live with dogs tend to acquire some dog gut microbes. Whether the same occurs with adults is less clear. I don’t advise intentionally acquiring dog microbes. But we know that kids, especially in cities, that grow up with a dog in the house are less likely to develop some allergies and asthma. Something about a dog in the house, microbially, can be good.

As for cats, the jury is still out. One microbe, called Toxoplasma gondii, associated with cat feces, can get into human brains and lead to changes in human behavior. In the garden of your daily life, it is definitely a bad weed.

I look forward to the day in which we can reconnect and share, anew, communities of microorganisms with others. In the meantime, I’m ever more aware of the thousands of species on my own body, in my own house and yard—virtually none of which have been studied, and many of which, though we spend so very much time with them, do not even yet have names.