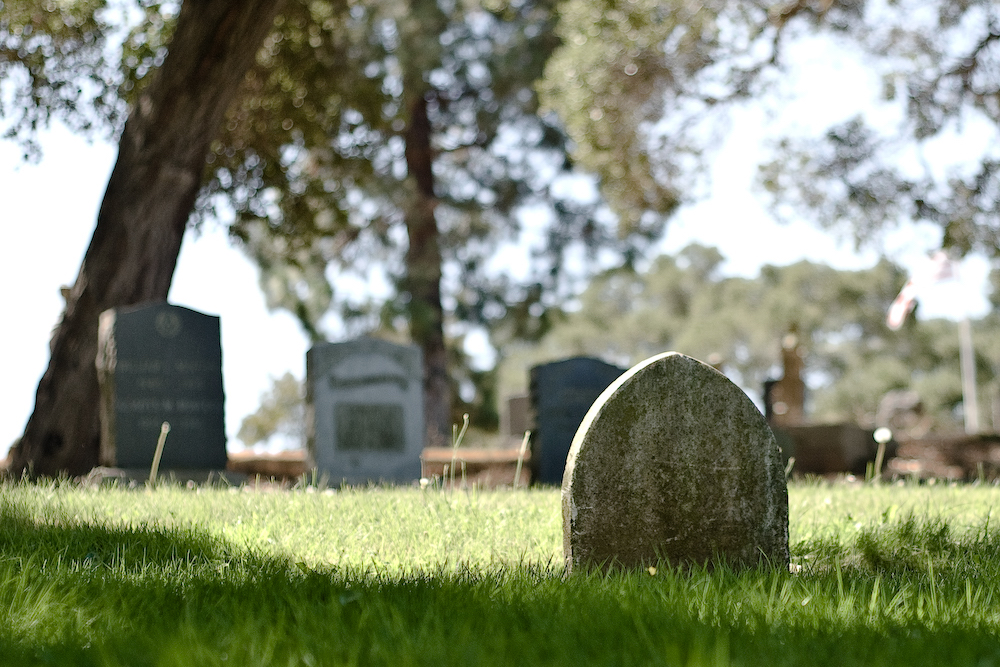 Zócalo’s editors are diving into our archives and throwing it back to some of our favorite pieces. This week: KCRW’s “To the Point” host Warren Olney remembers his summer job watering and cutting grass at a graveyard, and how it gave him new perspective on what his future might be.

We never heard about “recycling” when I grew up, during the Age of Plastics. But, during one summer off from college, I learned that one form of the practice is deeply rooted in human experience. Since the earliest of civilizations, we’ve been recycling our gravesites.

My education began with a jolt while I was a summer maintenance worker at the Mountain View Cemetery in Oakland. I grew curious one day when I noticed a new grave being dug in the older part of the cemetery, at the top of a little hill. The hole was already so deep that all I could see was the tip of the moving shovel as dirt was piled onto the grass above.

When I reached the edge of the grave and looked down, I saw a broken, yellowed skeleton being exhumed by one of my fellow workers. I was startled, and I must have gasped, because he laughed at me from behind his mask.

Then he reached down, grabbed the skull—which was fully intact—and tossed it into the air, challenging me to catch it in my bare hands. Overcoming the initial impulse to grab it, I let it fall to the ground, but I’ll never forget its toothy grin as it headed in my direction.

Mountain View is one of California’s early “garden cemeteries,” designed by Frederick Law Olmsted and promising “perpetual maintenance” in a sylvan setting. I got the summer job through my uncle, who was a trustee. Both sides of my family had plots there. Some of my relatives cared a lot about whose remains would be buried where, and, even as a young man, I knew there would be room for mine one day. But I wasn’t prepared for such concrete evidence of what the future might bring.

As a temporary employee, all I ever did was water and cut grass. I lacked the skill, endurance, or experience to dig graves. Those who did were almost all recent immigrants. I never asked my uncle about this, but I suspected immigrants were available for Mountain View’s brand of hard labor at a much lower wage than was acceptable to American-born workers.

Among these immigrants were two Irishmen, who did not shun stereotypes but reveled in them. They stuck together, calling themselves “O’Brien and Murphy”—nobody used first names—and they liked to exaggerate their heavy accents. After working and sipping hard liquor all day, they enjoyed tormenting Webber, a giant, stone-faced gardener from Germany. They would hide his tools at quitting time before he could get them into his locker. As he stormed around, searching for clippers or his favorite trowel so he could go home for dinner, they would tease him unmercifully in their Irish brogues: “Poor German, poor Webber. Webber has lost his tools.”

The Irishmen said it was fun to have me around. “Olney,” they said, “we’ll show you the ways of the world.” They made good on that promise in many ways.

Gravediggers could get extra pay for serving as pallbearers during graveside funerals when there weren’t enough surviving friends or relatives to perform that sometimes onerous task. For O’Brien and Murphy, the money and the time away from their spadework were causes for celebration, as I had learned when one of them tossed the skull in my direction. (They would never tell me which one was behind the mask.)

As they donned coats and ties supplied by the management, they were drinking more heavily than I’d seen before, and they invited me to come along to observe the ceremony, saying, “Olney, you’ve got to see Weeks deliver the funeral oration.”

Both sides of my family had plots there. Some of my relatives cared a lot about whose remains would be buried where, and, even as a young man, I knew there would be room for mine one day. But I wasn’t prepared for such concrete evidence of what the future might bring.

Weeks was Mountain View’s onsite manager, a former officer in the British Army and another recent immigrant who, behind his back, was the subject of much derision from O’Brien and Murphy. Because of his military bearing, they said, “He always looks like he’s trying to stand at attention and walk at the same time.” Weeks didn’t talk much, but he made clear, with occasional snide comments and body language, that he didn’t like the Irishmen any better than they liked him.

The event took place at the same open grave where I came upon the exhumation and dodged the grinning skull. From behind nearby bushes, I was able to watch it unfold. O’Brien, Murphy and two mourners lifted a heavy casket from a hearse parked on the road below. Groaning and puffing, they toted it up to the gravesite and laid it to rest on two straps, stretched tightly across the opening. When the time came, it was ready to be lowered into the grave.

Weeks, who was ramrod straight as always, began to address a small crowd of mourners while the pallbearers also stood tall—or at least tried to.

I couldn’t see or hear Weeks, who was turned away from me on the other side of the gravesite with the coffin and the pallbearers in between. But by that time, the alcohol was doing its work, and I could see Murphy’s legs tremble, then wobble, as he began to sag slowly downward, not just onto the ground but into the grave itself, finally catching himself on his elbows. O’Brien wasn’t all that steady either, but he was able to reach out and hold Murphy upright until he could pull himself back onto his feet.

Weeks never saw the near calamity among the Irishmen. The mourners were faced in the right direction, but I don’t know if they saw it or not. It all seemed to take place in less than a minute. Weeks finished speaking, the straps were loosened, and the casket sunk out of sight.

But that wasn’t all, because this grave was being recycled.

After Weeks and the mourners, including the two civilian pallbearers, had left the scene, O’Brien went behind the granite monument and picked up a wooden box. Murphy, who’d taken his coat off and used it to wipe his head, began filling the grave, using the dirt they’d piled up that morning.

O’Brien opened the box so I could see what was inside. It was the yellowed, broken bones and the grinning skull. He closed the box and, rather unceremoniously, dumped it in with the casket, then grabbed a shovel to help Murphy bury them both in the re-occupied grave.

Back in the locker room, O’Brien and Murphy explained what turned out to be an old story. Mountain View had run short of space, which was hardly anything new. In human history, about 108 billion people have lived and died. Early Christians reused burial mounds from the Bronze Age. In Europe’s Middle Ages, bone houses allowed village churchyards to be re-used. In America, it’s been common to recycle gravesites since colonial days. Remember the old spiritual, “Dem Dry Bones?”

At Mountain View, it had become cheaper for a mourning family to dig up what was left of a distant ancestor than to find new ground for more recent remains.

Recalling that summer experience got me wondering what should be done with my own remains. As I was writing this story, I called Mountain View to ask the status of the two plots where some of my ancestors now lie. It turns out they’re both “huge,” according to the sales person who answered the phone.

“So you wouldn’t have to recycle?” I asked.

“Disinterment will not be required,” she answered. “You can choose either one.”

That helped me make what could be a final decision: I’ll ask that my ashes be scattered at sea.