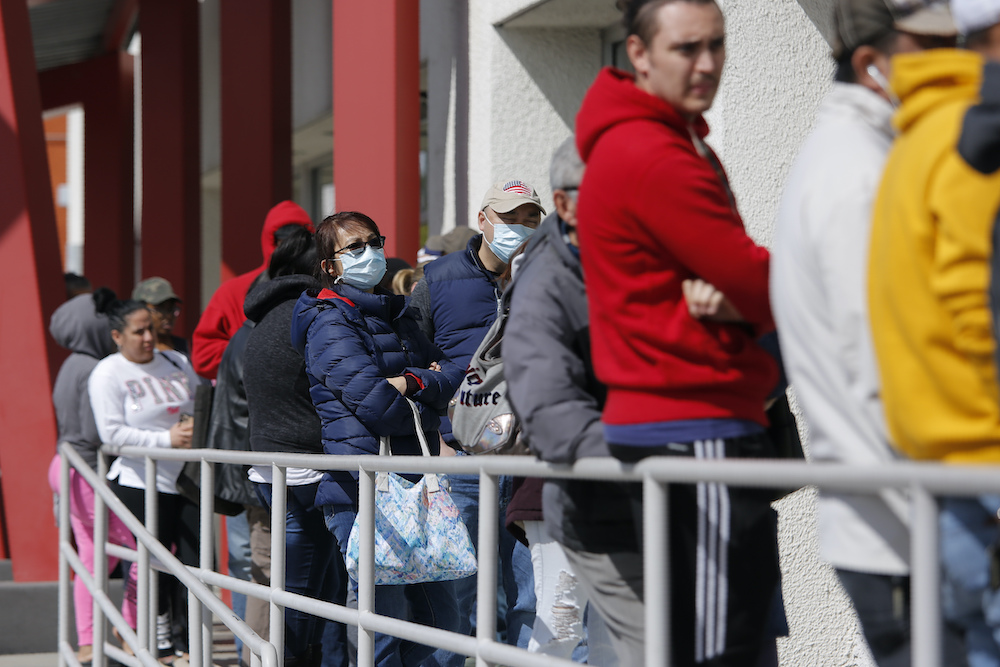 People wait in line for help with unemployment benefits at the One-Stop Career Center in Las Vegas. Courtesy of John Locher/Associated Press.

Monthly public reports on jobs and the unemployment rate are such a staple of American civic life that it can seem as if they’ve always been with us. But these reports are relatively new, and their establishment was neither quick nor easy. In recent months, they’ve become a barometer of the virus and our economic recovery, or lack thereof. Which is why we’d do well to understand what they measure, what they miss, and how they were established.

For the first 60 years of the modern economy—roughly from 1873 to 1933—the United States experienced six major depressions, many smaller slumps, and a lot of unemployment in between. And Americans suffered through all of this without a reliable and regular count of the unemployed.

Why not? You might think this was because of the underdeveloped state of the statistical sciences, but that was only one reason for the void. The more important factor was disbelief in the idea of unemployment itself. Many economists, politicians, ministers, charity officials, and other influential people dismissed the reality of unemployment by claiming that it was mostly voluntary. They believed that people without jobs just did not want to work, or could not work due to some personal defect.

Fortunately, theirs was not the only opinion. There were socialists, progressives, union leaders, and some scholars who believed that the roots of unemployment lay in systems, not individual failings. They argued that unemployment’s causes were technological and seasonal changes, as well as the general rise and fall of business activity as capitalists invested and overinvested and crashed. According to these dissidents, apathetic, laissez-faire government policies also contributed to prolonging mass unemployment.

By the 1900s, this group had gained influence and adherents. More scholars studied unemployment and more came to understand that credible reports on unemployment rates would be essential if governments wanted to reduce joblessness and aid those who were without work.

The 1920s, often thought of as a prosperous period, began with a depression and ended with another—which added urgency to questions of unemployment. In the more prosperous middle years of the ’20s, there was less urgency about counting the unemployed, but scholars like the American economist Paul Douglas made a heroic effort to count blue-collar unemployment. In a case study of Muncie, Indiana, called Middletown (1929), sociologists Robert and Helen Lynd took a stab at counting local unemployment in the mid ’20s. Government also got into the game. Two years before the 1929 crash, Senators Robert Wagner of New York and David Walsh of Massachusetts got the Senate to pass a resolution ordering the Bureau of Labor Statistics (BLS) to survey unemployment and to study methods for a regular tally.

For the first 60 years of the modern economy—roughly from 1873 to 1933—the United States experienced six major depressions, many smaller slumps, and a lot of unemployment in between. And Americans suffered through all of this without a reliable and regular count of the unemployed.

The Great Depression of the 1930s, when unemployment approached 25 percent, fueled interest in a national unemployment count and serious unemployment policies. Workers demonstrated for immediate relief, and they voted for politicians who promised to create jobs and unemployment insurance. The new Secretary of Labor, Frances Perkins, wanted better numbers, and she helped to modernize the statistical capabilities of the federal government. Most Americans wanted to know whether things were getting better or worse.

The Works Progress Administration (WPA), which employed millions of Americans in thousands of occupations starting in 1935, had a special interest in tracking unemployment. It needed to know how many people to help. After a variety of counting experiments involving many government agencies (including the Civil Works Administration, the U.S. Postal Service, the Census Bureau, and the WPA), the WPA carried out, in April 1940, the first official monthly survey of employment and unemployment.

That first survey, and every survey afterward, was based on a scientifically selected sample of households. People would be considered unemployed not because they said they were, but because they stated that they had not worked at a paid job in recent weeks, that they wanted a job, and that they had searched for one in the weeks before the survey. If you were without a job and had not searched for one, you were not unemployed. You were out of the labor force.

Since that first report, the survey has been carried out every month. It has changed in many details, but the basic definition of unemployment has remained: If you want a job, look for one, and cannot find one, you are unemployed.

Over time, the administration and size of the job report has evolved. In 1942, the Census Bureau took over the monthly survey. In 1948, it was named the Current Population Survey. In 1959, the Bureau of Labor Statistics took over the analysis and publication of the information. The Census Bureau still does the interviewing, trying to contact people in 60,000 households each month.

The monthly survey generates thousands—probably hundreds of thousands—of useful and important numbers, from the official national unemployment rate to the rates for black teens, veterans, and disabled people. This gives Americans a lot of information that can be used to create and support specific anti-unemployment policies, and to help to track month-to-month whether the economy is improving for most people.

Over the years, Bureau of Labor Statistics methods have been challenged at times. In the mid-1970s recession, more critics started claiming that the agency was undercounting the unemployed. Some critical economists began using government numbers to create their own unemployment rates, often higher than the official ones. In response (but without changing the definition of unemployment or the official rate), the BLS published a table of alternative rates that resembled those of its critics.

And that’s just one alternative. A group of scholars and activists (myself included) pushing for full employment, the National Jobs for All Coalition, using a more inclusive measure of people who want a job, found an unemployment rate of 8.8 percent (which we call “The Full Count”) for November 2019.

There is much to suggest that a larger unemployment count would be truer to the facts. Here’s one example: For several decades now reporters and scholars have been writing about the long-term decline in the share of prime-age men (between the ages of 25 to 54 years old) who are working or looking for work. I believe that quite a few of these men would more actively search for work if better job opportunities were within reach. These men are essentially unemployed, but are not counted as such by the federal government. Many such people do, in fact, go to work eventually.

For this and other reasons, that would make the group of truly unemployed Americans much larger than the BLS maintains. If so, that may help explain a major American mystery: Why wage growth for average workers has been low to non-existent in many years.

Here is that puzzle. Until the coronavirus crisis, official unemployment rates were under 5 percent almost every month since January 2016. That is four years of full employment by conventional assumptions. But real hourly wages for average workers increased a total of 3 percent in that time—less than 1 percent a year. Some attribute that lower wage gain to diminished union power or the pathetically low federal minimum wage ($7.25 per hour, and even lower in some occupations). Those factors are important. But if employment were as full and labor markets as tight as the federal numbers suggest, real wages would be jumping up by 2 or 3 percent a year.

More recently, the Bureau of Labor Statistics has confessed to omitting millions of people thrown out of work by the coronavirus. The number of omissions may have been as high as 7 million workers in April 2020. But by July, the undercount issue seems to have been pretty much solved.

And, in general, we should be thankful that we have generally reliable unemployment numbers, that we can learn about the methods used to generate them, and that we can use federal data to construct better numbers.