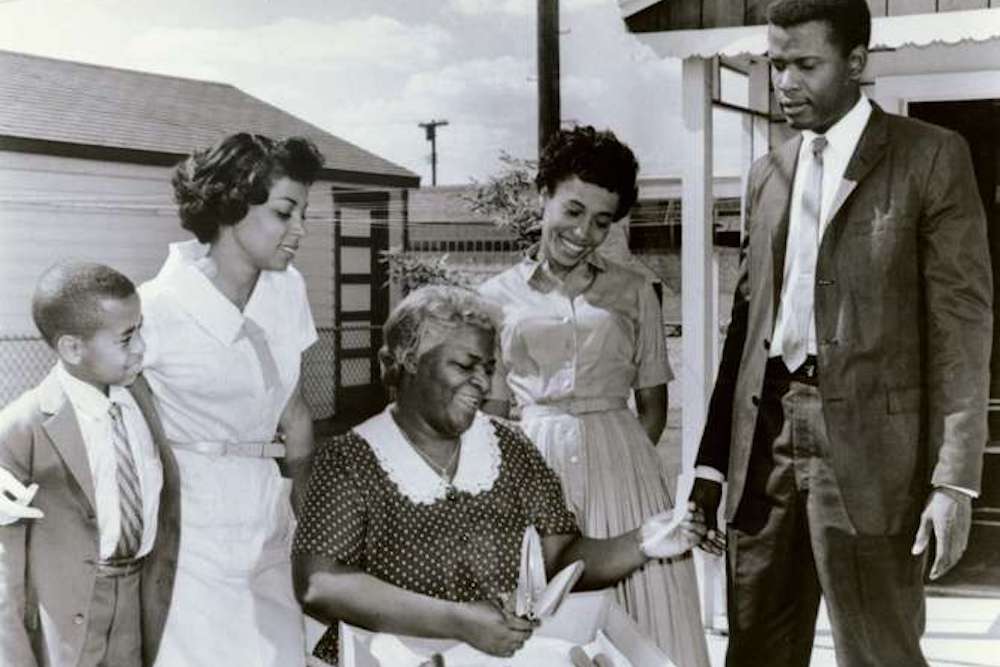 When the curtains open on Lorraine Hansberry’s most famous play, A Raisin in the Sun, we see Ruth Younger bustling about a claustrophobic Chicago kitchenette: waking her loved ones, cooking, fretting. As the Youngers compete with other tenants for the bathroom down the hall, Hansberry uses stage directions and dialogue to suggest that cramped quarters strain relationships. Recently widowed, Lena Younger lives here with her adult son, Walter Lee, who is Ruth’s husband; their son, Travis; and Lena’s 20-year-old daughter, Beneatha, who wants to become a doctor. Mama Lena has received a $10,000 insurance check because her husband “worked hisself to death,” which Walter Lee wants to invest in a liquor store.

The play debuted in 1959 and made Hansberry the first African American woman dramatist produced on Broadway, and its tensions unfold as the United States worked to convince people of color that they would never be at home. Facing segregation and housing discrimination, African Americans cultivated what I call homemade citizenship—a deep sense of success and belonging that does not rely on mainstream recognition or civic inclusion.

Suburban home ownership became a barometer of American success in the 1930s and 1940s, with mortgage loans newly subsidized by the Federal Housing Administration. But Black and Brown citizens were systematically excluded, so most African Americans could not pursue home ownership until the 1950s. Placing Black people’s struggle to attain this marker of American achievement on Broadway, Hansberry accomplished a feat parallel to that of the family she portrayed. Both the Youngers and their creator encountered hostility for daring to reach for what the country defined as success.

Revisiting Hansberry’s 1959 triumph proves poignant in the wake of the open letter to “White American Theater,” which is part of the racial reckoning prompted by the video-recorded police murder of George Floyd. Signed by more than 350 practitioners and creators of color, including Lin Manuel Miranda and Viola Davis, the letter exposes how the theater world resembles other arenas: Its institutions prioritize solidarity statements over self-reflection, structural transformation, and material redress. The letter also suggests that theater criticism facilitates exclusion and condescension: “We have watched you amplify our voices when we are heralded by the press, but refuse to defend our aesthetic when we are not, allowing our livelihoods to be destroyed by a monolithic and racist critical culture.”

Though Hansberry became “a darling of the theater world,” according to biographer Imani Perry, she experienced the racism of its critical culture. Because United States citizenship is built on the exclusion of African Americans, even when Black success does not prompt naked brutality, it inspires condescending reminders of difference, of outsider status. A Raisin in the Sun therefore places a spotlight on what historian Carol Anderson calls white rage: In portraying Black ambition, the play also showcases the white hostility that always accompanies it.

Over the course of the play, as the Youngers pursue a better life, Mama Lena spends part of her insurance payout to place a down payment on a house in the Chicago suburb of Clybourne Park. In response, her son Walter Lee disappears for three days. When he returns, his hopelessness convinces Lena that she has helped the United States strip her son of his manhood and kill his dreams. So she gives him the $6,500 left after the down payment, instructing him to put $3,000 in a savings account for Beneatha’s medical school education and the rest in a checking account under his name. “I’m telling you to be the head of this family from now on like you supposed to be,” she says.

On moving day, Mama Lena is out when a representative of the suburban neighborhood association arrives. Karl Lindner, who is white, tells Walter Lee, “Our association is prepared, through the collective effort of our people, to buy the house from you at a financial gain to your family.”

Both the Youngers and their creator encountered hostility for daring to reach for what the country defined as success.

Insulted by this “civil” effort to keep his family out of the neighborhood, Walter Lee declines. However, he later realizes he has been swindled out of every penny entrusted to him, having given it to an acquaintance who promised to speed up the liquor license process and then skipped town. He invites Lindner back and rehearses a speech to accept the humiliating offer.

In the end, Walter Lee cannot stomach the routine he has practiced. “We have decided to move into our house because my father—my father—he earned it for us brick by brick,” he tells Lindner.

“What do you think you are going to gain by moving into a neighborhood where you just aren’t wanted?” Lindner demands.

The play ends with the Youngers moving out of the tenement, heading for the suburbs, despite every indication that their fellow Americans will not welcome them. Mama Lena is the last to exit the apartment, and her pensive farewell serves as a prelude to a future of offstage malevolence.

Hansberry’s drama highlights the mundane cruelty of denying people of color desirable homes. While the federal government encouraged “all” Americans to pursue home ownership, FHA redlining enacted bloodless violence by making whiteness a qualification for access to the American Dream. At the same time, the labor movement’s “family wage” campaign empowered white heads of household while excluding non-white people, given that (like most American institutions) unions discriminated based on race, as cultural historian Chandan Reddy has shown.

Employment and housing discrimination prevented most citizens of color from organizing their households according to the nuclear family ideal, a male breadwinner and his financially dependent wife and children. The few whose households fit this mold achieved a level of success that would not go unchecked. White Americans attacked families of color who dared to move into “their” neighborhoods. Thus, declarations about the nation’s preferred domestic configuration amounted to discursive violence—telling everyone to aspire to an ideal while affirming only white examples of it—that encouraged physical violence.

The Youngers understand that they invite injury by clinging to a suburban definition of success. As they reach for what white Americans will attack them for securing, they do not pursue white acceptance, but instead, claim what they believe to be rightfully theirs. Aligning with the tradition traced by legal historian Martha S. Jones, Walter Lee declares his family to be birthright citizens, telling Lindner, “This is my son, and he makes the sixth generation of my family in this country.”

Interpretations of Raisin have been shaped by the presumption that it is a protest play, that it resists segregation. This lens obscures what most drives the action: a pursuit of success. If one focuses on accomplishment as African Americans do, it becomes clear that pursuing achievement in the face of white opposition requires the Youngers to define and re-define the parameters of success. They are not pursuing integration as a form of protest or resistance, but rather, to accomplish goals and claim resources. The play reveals that what has been framed as “integration” is really about getting white people to stop hoarding everything desirable. Further, “civil rights” are human rights—pursued not for “equality” with white people but as an assertion of clarity about one’s due.

While pursuing success, most members of the Younger family prioritize patriarchy, so the play showcases a reality that protest-obsessed audiences miss: the damage done in Black households when prevailing ideas about gender are not questioned. The Youngers subscribe to the rhetoric of the 1950s Black church that often vilified single women’s goals. Christianity’s message of affirmation routinely failed to reach single black women—represented in Raisin by Beneatha—even in their own homes. Beneatha personifies all that must remain “beneath,” as Mama Lena pursues a particular vision of success. Beneatha’s future is sacrificed because, although Walter Lee shows little capacity for leadership, he is male and therefore his mother is determined to make a leader of him. Beneatha is not only teased for her pan-African sensibilities and denigrated for valuing career over marriage, but also, in an iconic scene, she is slapped by her mother in the name of God.

This complexity has been overlooked because theater criticism kept Hansberry preoccupied with defending Lena’s humanity. White critics’ casual vilification of Mama Lena as an emasculating matriarch revealed a lack of empathy for the pressures she faced, and led Hansberry to defend Mama Lena as fiercely as Mama Lena had defended Walter Lee.

However, if one focuses on how African Americans would encounter the work’s theme of Black achievement, the terms of the debate change. In the Younger household, success is defined in patriarchal terms, devaluing half the community. Scholars and readers rarely notice this, however, because most insist upon seeing Mama Lena as the embodiment of resistance to racism. Even the insightful biographer Perry argues, regarding Lena, that “in Lorraine’s literary world, mother wisdom is trustworthy though subtle, and paternal inheritances are thorny and overpowering.” If Lena’s behavior is examined not as a reaction to white hostility but for its impact on Black people, however, it becomes clear that when family members do not live up to patriarchal ideals, she not only withholds affirmation; she is violent. Besides slapping Beneatha, she “starts to beat [Walter Lee] senselessly in the face” for losing the insurance money. The Younger household is not a safe haven, especially for women who question (divinely ordained) male leadership.

Perry, Hansberry’s most nuanced chronicler, notes the playwright’s frustration with white critics’ failure to engage the work itself. A crucial question therefore arises: “How does one navigate racial perceptions that overlay everything … such that they effectively become part of the production no matter what the artist does? For Lorraine the answer was to become a critic.”

Hansberry could not ignore what the recent open letter to white American theater calls a “monolithic and racist critical culture,” so she wrote cultural criticism herself. Nevertheless, the complexity of her creative work proves undeniable, if examined with Black audience members in mind. Because African Americans pursue success despite the odds against them, the art they produce while doing so offers insight into how they remain invested in accomplishment despite the white rage it attracts.

Debating what constitutes achievement is part of the labor of cultivating homemade citizenship, but it is complicated work. As performance theorist Soyica Colbert suggests, Raisin’s tense scenes expose “the conditions that enable Mama to create a house” as well as those “that establish Beneatha’s homelessness.” Beneatha is outnumbered, yet Hansberry’s play honors her struggle. With her last words, Beneatha stands firm: “I wouldn’t marry [the man everyone approves of] if he was Adam and I was Eve!” In preserving Beneatha’s bold perspective, Hansberry’s work encourages African Americans to question whether their definitions of success account for the entire community.

This message remains relevant, as Black and Brown women succeed against the odds, only to become targets for abuse. When hostility does not come in the form of attack, it manifests as erasure: Black women’s leadership is often relegated to the margins, even as their ideas set the course that many others later advocate. Meanwhile, Black and Brown women continue to be ridiculed whenever they prioritize their own goals rather than simply serve everyone else. These tensions are as deep now as they were in Hansberry’s time, and we should heed her call to address them both within communities of color and on the national stage.