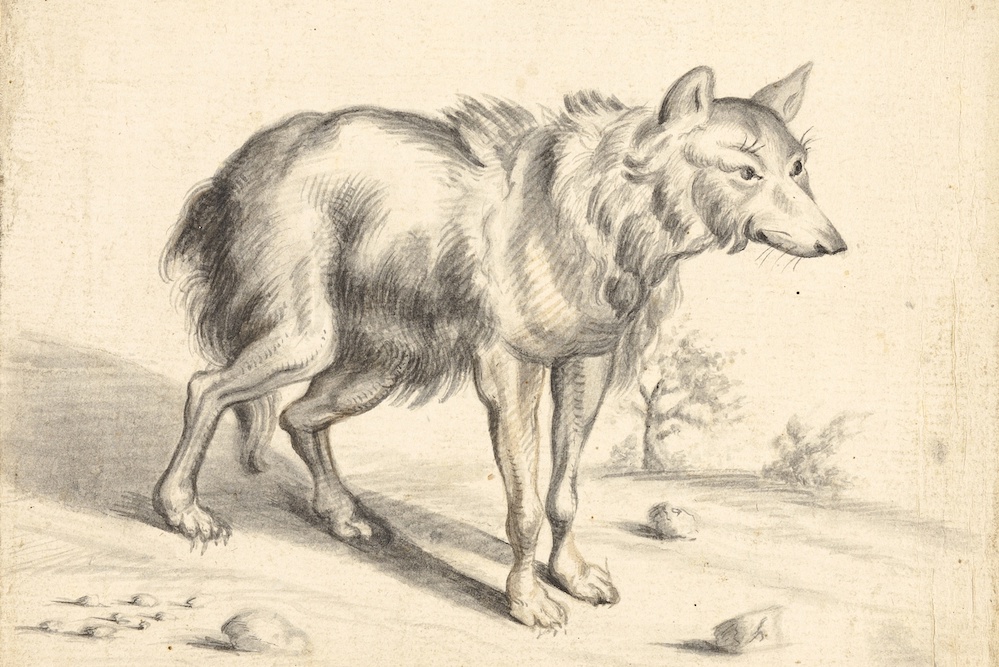 Drawing of a wolf by Jan van Os, 1655. Courtesy of the Art Institute of Chicago.

of bread, a head of lettuce wet with dew,
the final kindness of his plate) and the abbot

was sick of it—Sebastian agreed, you see,
so, he told the beggar he found on the road covered,

as that man was, in a wealth of his own piss
and pinhole scabs that he could not stop him

from talking the cloak by force. The beggar did.
It was his way, Sebastian, I mean. In his youth,

the plague had come for him and his village in Spain.
He alone survived. A wolf came out of the hills

of what was to come. The wolf burst the tumor—
a bladder of bad wine—lapped the pus, covered

himself with it. He gave it freely, Sebastian did,
to the wolf. It was his generosity that mattered,

you see. Later, even in death, he held his body
close, kept it fresh, for who knew when it might be

needed again. They kept checking, the abbot
and his minions, I mean, in the temple

of San Francisco. His body was waiting. It stayed soft,
incorruptible as gold. A hundred and twenty years

later he was ready when revolution burst
into Mexico, when soldiers tried to lap up

the wealth of the church. They opened
the walls and filled them with holes.

They plundered, they perforated,
and, finding nothing, took a dagger

and opened the body of Sebastian
looking for his golden heart.

Sebastian was ready. He gave them
his insides the way he gave his tumor

to the wolf. He bathed them in his bowels,
blessed them, I mean, with all that richness.