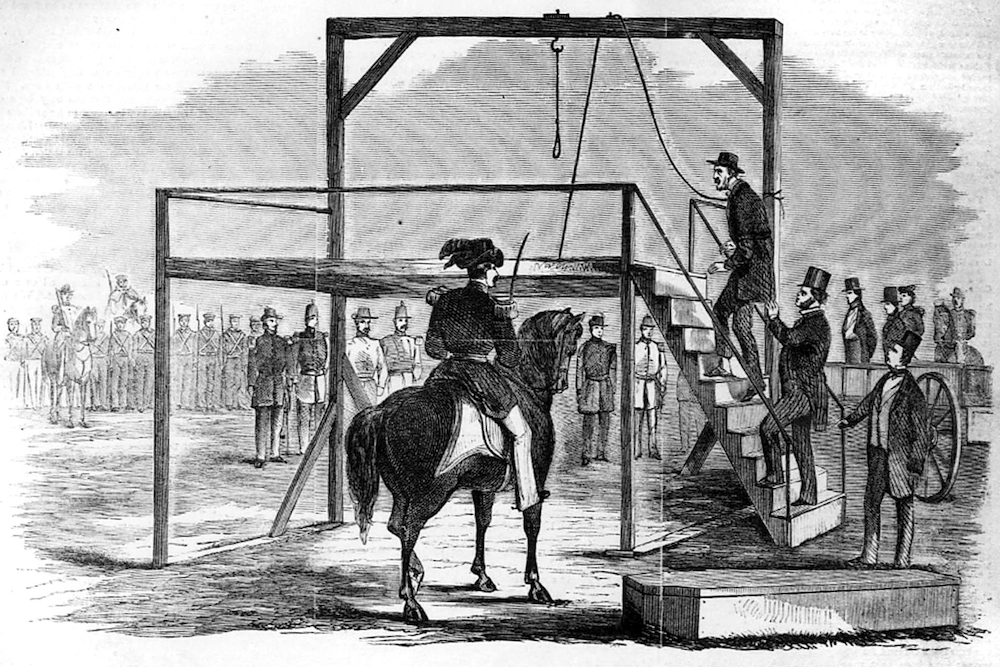 After his 1859 raid on Harper’s Ferry, the abolitionist John Brown was hanged for treason against the Commonwealth of Virginia. These days, American politicians crow about “treason” all the time. But in the United States, few betrayals actually merit prosecution for treason under federal law. Courtesy of Marion Doss/flickr.

The last four years have been a strange time to be a scholar of American treason law. The members of this tiny (and I mean really tiny) group used to live pretty quiet lives. We could happily toil away on historical matters, undisturbed by the din of the daily headlines.

Besides, who needed modern distractions when the history was so thrilling? The story of treason—attempts to overthrow the government or to aid our enemies—is nothing less than the story of America itself. Our country was forged in the American Revolution by people willing to commit treason against Great Britain, and the Confederate cause in the Civil War was the largest-scale act of mass treason in our history. The individual characters are riveting, from Benedict Arnold and his sordid betrayal of West Point to the poet Ezra Pound, prosecuted for treason for broadcasting fascist propaganda from Mussolini’s Italy. The accused persons represent every segment of society, from a former vice president (Aaron Burr) to the local leader of a miners’ union prosecuted for treason against West Virginia in the 1920s. 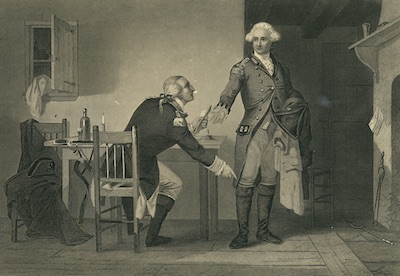 The Revolutionary War officer Benedict Arnold was a traitor to the American cause who defected to the British Army in 1780. Here, Arnold is depicted providing plans to surrender West Point to the British to his friend British Major John André. André was later captured and hanged; Arnold got away. Courtesy of C.F. Blauvelt/Library of Congress.

For many years, I worked on the book that would become The Trials of Allegiance: Treason, Juries, and the American Revolution. I could proceed at a glacial George R.R. Martin-agonizing-over-The Winds of Winter pace because there was no obvious connection to current events. In 2015, a Zócalo Public Square essayist confidently proclaimed that “We’re living in what has to be the nation’s golden age of loyalty.” The essay was headlined, “Is Treason now Just a Punch Line?”

And then that world was turned upside down with the political rise of Donald J. Trump. The first phone call from a reporter came in July 2016, after Trump publicly encouraged Russia to find Hillary Clinton’s emails. The question—which I would quickly become used to—was: “Is this treason?” And the answer (which I also quickly became used to, given the Constitution’s narrow definition of the crime), was no. But the calls kept coming, becoming a flood after Trump’s inauguration, as antennae perked up at further revelations about Michael Flynn, Russian interference in the election, the Mueller investigation, and the infamous meeting at Trump Tower.

Around this time, my literary agent asked me to write a second book about treason, one that would bring the story up to the present day, and that would lay out the byzantine law of treason in a manner accessible to interested citizens. I wasn’t sure I was ready to take on another book so quickly, but as misguided treason charges and countercharges swirled through our national debate, I came to realize that we were in a unique historical moment. If we were going to be arguing about American treason law so much, we should at least have a better understanding of what it is—and maybe even more importantly, what it is not.

All nations have treason laws to deal with the problem of disloyalty. But if those laws aren’t carefully circumscribed, they can easily become a tool of domestic oppression—a tendency the framers of the U.S. Constitution recognized all too well. In the tumultuous years prior to the adoption of the Declaration of Independence, British authorities had threatened to prosecute American tax protestors for high treason in England, far from the protections of a local jury. Prominent attorney James Wilson, who represented Pennsylvania at the Constitutional Convention, explained the problem this way at the Pennsylvania ratifying convention: “Crimes against the state! and against the officers of the state! History informs us that more wrong may be done on this subject than on any other whatsoever.” Wilson and the other framers of our Constitution accordingly chose to define the crime directly in the document itself—and to define it narrowly. Article III, Section 3 restricts the offense to “levying war against the United States” or “adhering to their enemies, giving them aid and comfort.” Although these phrases pose many interpretive difficulties, they clearly prevent treason prosecutions for offenses such as criticizing the government or organizing a political party.

The question—which I would quickly become used to—was: “Is this treason?” And the answer (which I also quickly became used to, given the Constitution’s narrow definition of the crime), was no.

There have been few actual treason prosecutions under the U.S. Constitution, and only one person, Hipolito Salazar, has been executed for treason under federal authority (a truly bizarre case from the Mexican-American War—Salazar was a Mexican citizen, tried and convicted on Mexican soil). A handful of American presidents have been traitors, though none during their time in office—and none were prosecuted. Our first five presidents all committed treason against Great Britain during the Revolutionary War, well before the adoption of the Constitution. During the Civil War, former president John Tyler committed treason when he supported military actions against the United States in his role as a member of the Virginia Secession Convention. Curiously, the older crime of treason against individual states was not definitively eliminated by the Constitution and states have occasionally brought charges, most notably the 1859 prosecution of John Brown by the state of Virginia for leading the raid on Harpers Ferry.

Other than the distinctive case of the secessionists during the American Civil War, it’s rare for disloyalty to rise to the level of treason as defined in the Constitution. So why is it that treason—or “treason”—is now so regularly discussed? There are two simple reasons: what Donald Trump does, and what Donald Trump says.

First, for many people, Trump’s conduct raises considerable suspicions about his underlying loyalty. Trump consistently seems to place Russia’s interests ahead of America’s, whether by ignoring or condoning blatant Russian misbehavior or by kowtowing to Vladimir Putin. Indeed, Trump’s consistent failure to publicly criticize Putin is perhaps the most bewildering aspect of his presidency. Many Americans fear the worst, pointing to news reports suggesting that Trump’s tangled financial dealings involve significant debts to Russian sources. It is not irrational to suspect that Russia may have all kinds of personal or financial kompromat on him.

In a colloquial sense, Trump’s conduct—far beyond the bounds of normal presidential behavior—may have betrayed the country. But nothing Trump has done (or is alleged to have done) formally rises to the level of treason as a matter of criminal law. Foreign nations like Russia are “enemies” only if we are in a state of open war with them. Despite all the covert back and forth with Russia, we are simply not in a state of open war. For similar reasons, Americans who spied for the Soviet Union, like the Rosenbergs or Aldrich Ames, were prosecuted for espionage (which doesn’t require a state of open war), not treason.

Still: “it’s not technically treason” is a strange thing to have to say about an American president.

Second, unlike any of his predecessors, Trump uses his presidential podium to routinely accuse other Americans of treason, targeting congressional Democrats, anonymous critics, James Comey, Adam Schiff, and, perhaps most notoriously, his predecessor, President Barack Obama.  In a Tweet (naturally), Trump claimed that the “ObamaBiden Administration” had committed “treason” by spying on his 2016 presidential campaign. These accusations lack even the flimsiest basis in fact or law—but unfortunately many of Trump’s supporters take him at his word. They are convinced that actual traitors permeate the Democratic party and the federal government.

We have become so numb to the excesses of Trump’s rhetoric that it is easy to forget just how extraordinary this is. Treason is a capital offense and routinely described as the highest crime in American law, worse even than murder. Accusing a fellow American of treason is (or at least used to be) one of the most significant utterances a president could possibly make. But now it often doesn’t even make the news.

Since the current excitement over treason and disloyalty is so heavily tied to Trump’s distinctive behavior and rhetoric, it will likely dissipate significantly when someone else occupies the Oval Office. At the same time, even a defeated or termed-out Trump may continue making outrageous claims from the sidelines, thus risking continued pollution of our political rhetoric.

American treason law is a rich and rewarding field, one that is absolutely central to the larger story of America itself. On some level, I suppose I should be pleased that the subject into which I have invested so many years of research is now attracting a much wider audience. But, as fascinating and surreal as it is to be queried regularly by reporters about whether the president of the United States has committed treason, I’d much prefer to live in a world where that question doesn’t arise.