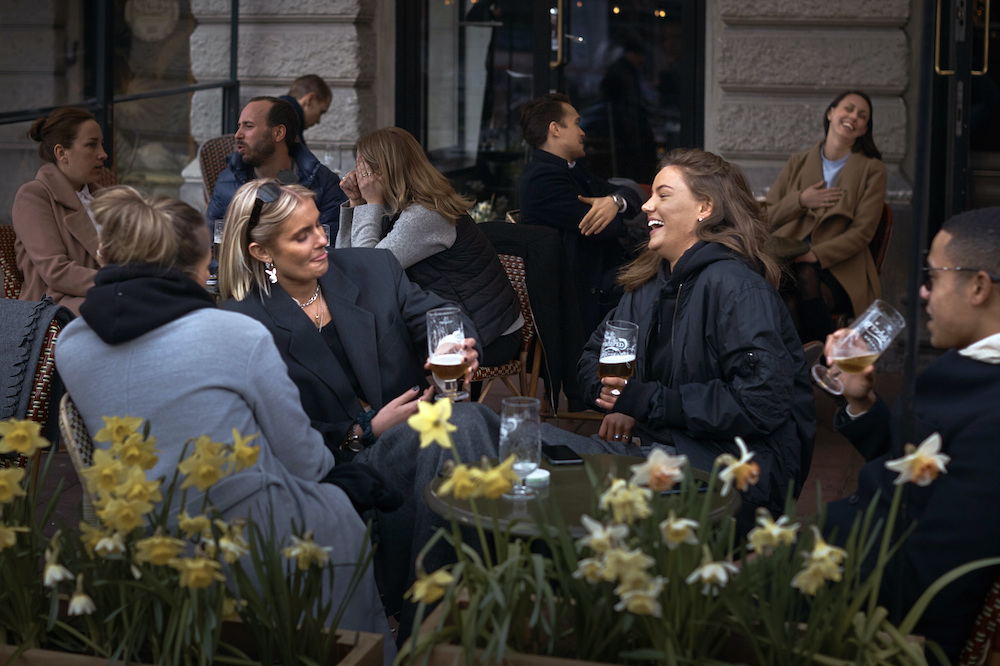 People outside a bar in Stockholm, Sweden, on Wednesday, April 8, 2020. Courtesy of Andres Kudacki/Associated Press.

About a year ago, I hung upside down from my seatbelt in a small sedan. Thankfully, I was completely safe during the entire experience: It was part of the compulsory “risk” education associated with getting a driver’s license in Sweden. Together with a bunch of Swedish teenagers, I was learning how to escape from a rolled car. Later that day, we’d also slip and slide on a halkbana—literally a “slippery track”—to learn to maneuver a vehicle through various obstacles, and, importantly, to feel what happens when you can’t, and your car spins out of control. This day-long adventure was a far cry from the parallel parking and tame driver’s ed of my American adolescence. And this was just one of four crucial parts to my eight-month, self-paced educational experience, including a half-day seminar on the risks associated with driving; an hourlong behind-the-wheel road test; and a difficult theory exam.

Sound like a lot? It’s one small part of Sweden’s extensive “Vision Zero” project, an initiative begun in the late 1990s to eliminate all deaths and serious injuries from traffic accidents. Coordinated across multiple government agencies, Vision Zero ambitiously prioritizes the safety of residents from preventable tragedies. And while it’s paying off—the clear trend is decreasing deaths and injuries—we’re not at zero yet. In 2009, 358 people died in traffic accidents in Sweden; in 2019, that number was 221. (By comparison, the U.S. states Georgia and North Carolina, which—like Sweden—have a population of approximately 10 million, had more than 1,500 and 1,400 traffic deaths, respectively, in 2018.)

As an American immigrant in Sweden, I find this focus on safety admirable, even utopic. Similar examples of Swedish regulatory cultures around safety abound. Every new private home is required to have a locked medicine cabinet. Employers pay for protective glasses for workers suffering from too much screentime. Alcohol is highly taxed and only available at the federal store known in Swedish as “the System.” And hitting closer to my own crunchy, homesick-for-Whole-Foods-Market tastes: Only whole flax seeds are sold in Sweden (even though our bodies can’t take in their beneficial nutrients that way). Alas! The crushed ones carry a tiny risk of cyanide poisoning.

In Swedish society, the precautionary principle reigns: When we lack evidence for the safety of a given issue, we proceed with caution to protect the public from harm. This bedrock principle informs all of the safety regulations above, and more—especially when it comes to health care. Sometimes infuriatingly so, doctors here are cautious in prescribing everything from hydrocortisone to antibiotics, and unless there is clear evidence a treatment will not cause you harm, you will have a hard time finding a Swedish doctor who will prescribe it.

Soon after our family moved here for work in 2015, I fell in love with the sensible, progressive attitude of most Swedish governmental policies, gladly shedding my distrust of institutions. A chronic worrier about immigration matters (among other paperwork stressors), I adopted the comforting, if naïve, mantra: “If it’s wrong, Sweden will find a way to make it right.”

All of which is why, when the novel coronavirus began to break into the news cycle early in 2020, I watched the Swedish response with curiosity. Sitting in a doctor’s waiting room on February 28, a small, professionally printed (and impeccably designed) cardboard table tent informed me that the overall risk level for an outbreak in Sweden was “relatively low.” I felt soothed by this news. Sweden was taking care of it. The authorities had said so. And they had time to make table tents!

Just 12 days later, the first person died of COVID-19 in Sweden. The infection rate, here as elsewhere, climbed steeply. At the end of March, one month after the table tent, Sweden reported 4,834 people had documented cases of COVID-19; by the close of April, that number had jumped to 21,602 cases. (It’s worth noting that Sweden did not offer widespread testing until late June; in the spring, only those admitted to the hospital were offered COVID-19 tests, so these numbers are likely an undercount.) In the fall, following six weeks of population dispersal into the Swedish countryside, case numbers dropped significantly. Starting in September, about two weeks after school resumed, cases appear to be climbing again—albeit slowly, while intensive care beds occupancy and deaths are way down compared with the spring.

In a country where the good of the many often supersedes the rights of the few, why are Swedes content with a policy that instead puts so many burdens on individuals, particularly the most vulnerable?

Sweden’s pandemic approach has garnered outsized attention in the English-speaking press considering its relatively small population of 10 million. I watched with incredulity as tiny Social Democrat-ruled Sweden was celebrated at home by Trump supporters who urged, “Be like Sweden!” Meanwhile, on the left, our high death rate became a cautionary tale for the dangers of “herd immunity.” When a community achieves herd immunity through prior infection or vaccination, vulnerable individuals (even the unvaccinated) gain protection because the disease can’t find new hosts and thus can’t spread as easily. Explained in this way, herd immunity sounds quite Swedish: Collectively, we can protect the members of our “herd” unable to protect themselves. (Yet interestingly, Sweden does not mandate vaccinations for newborns, relying on parents to make that decision for their children. Compliance is reliably around 97 percent.)

Officially, Sweden never adopted a herd immunity strategy, although several of its policies seem to have it in mind, at least as a side effect. Sweden in fact chose a mitigation strategy: The Public Health Agency (FHM) aimed not to stop the virus but to control its spread so that the health care system, especially intensive care beds, would not be overwhelmed. In the beginning, this mitigation strategy—aka “flatten the curve”—was the goal of many nations, but as we learned more about the dangers of surviving COVID-19 (including sustained damage to the heart, lungs, and kidneys), and more about its transmission, many nations similar to Sweden (such as its neighbors, Denmark, Norway, and Finland) shifted course to a “crush the curve” strategy of “test, trace, and isolate.” FHM, however, persisted in emphasizing mitigation measures (wash your hands, keep your distance, stay home if you’re sick), avoiding panic, and protecting our most vulnerable, those who are over 70 years old and/or those with risk factors that exacerbate COVID-19.

But at the time I write this, Sweden has one of the highest death tolls per capita in the world: 57.3 deaths per 100,000 residents, just under the United States’ 57.39. By comparison, in Italy, ground zero for the European pandemic, that number is 58.77; in Norway, a more comparable nation to Sweden in terms of demography, that number is 4.97. Perhaps more alarming is Sweden’s high case fatality rate (6.9 percent), more than double that of the United States. Some of the most vulnerable in Sweden—those in nursing homes—were not protected under the mitigation strategy. In fact, of the 5,731 people killed by COVID-19 in Sweden, 5,137 were older than 70, and 2,855 of those deaths were people over age 85.

Reports have emerged in Swedish media of family members being informed their loved ones were being placed in palliative end-of-life care instead of being treated for COVID-19 in the hospital. According to the National Board of Health and Welfare, a mere 17 percent of Swedish elders in care homes were provided hospitalization, and public documents show that instead of attempting to fight the virus, the National Board of Health and Welfare advised health care workers to treat these patients with anti-anxiety medications as well as morphine and other opioids. As I watched this failure of compassion and infection containment in real time, I became saddened. Then enraged, then disillusioned by my adopted country, or my idea of it. I asked Swedish friends, “Would your reaction to these deaths be different if it were children who suffered disproportionately instead of elders?”

Their silence was informative. And the policies around education followed suit: Schools remained open for the under-16s throughout the pandemic. FHM has also advised parents to send children to school even if someone in the household has a confirmed case of COVID-19, so long as they are symptom-free. At first, FHM reasoned, and most Swedish media agreed, that if the children stayed home, we’d suffer from lack of personnel in essential services, particularly in health care. (Never mind the extensive child-care system in place for school breaks designed just to meet this purpose). But recently, leaked emails between state epidemiologist Anders Tegnell and other high-level public health advisors belie this public position. On March 14, Tegnell wrote, “One point in favor of keeping the schools open is to reach herd immunity faster.”

Yet these leaked emails, and the assumptions they make about the more vulnerable relatives and school staff to whom children could transmit the virus, barely made a splash with the stoic Swedish public.

It may be that elementary school-aged children face a relatively low risk of serious health consequences from COVID-19. But since we don’t know the long-term effects the virus has on young people, and we also don’t know their role in spreading the disease to the adults in their lives, shouldn’t the precautionary principle apply?

Apparently not: Parents who in good conscience wished to protect their children or themselves by educating them at home were not only denied that opportunity, but they were also in some cases threatened with reports to social services for neglect for violating the skolplikt requirement. Literally the “duty to school,” skolplikt prohibits homeschooling and mandates education of all school-aged children. Like much Swedish public policy, it’s meant to provide a common standard for education and health, regardless of socioeconomic status. Skolplikt is there for the greater good of children, and thus, for the whole of Swedish society.

But during the pandemic, exactly whose greater good is Sweden considering?

COVID-19 is serving as a magnifying glass of our societies’ vulnerabilities. And what is magnified in Sweden is that this question of the greater good requires constant focus, revision, and holistic framing in the face of new challenges.

In the face of a deadly virus with unknown long-term consequences, why didn’t caution reign here? Where was and is the Swedish regulatory state in this question of safety? (For this virus is surely more deadly than crushed flaxseeds, and even more deadly than traffic accidents.) In a country where the good of the many often supersedes the rights of the few, why are Swedes content with a policy that instead puts so many burdens on individuals, particularly the most vulnerable? And, most disturbingly, why do so many accept, without question, the government’s policy to allow an unknown virus to spread freely through our shared society?

Even after five years in Sweden, I can only begin to speculate on answers to these questions. I know I’m not alone: Thousands of Swedes are members of secret Facebook groups advocating for changes to the Swedish strategy, and more than 7,000 have signed a Change.org petition asking the World Health Organization to intervene in Sweden’s relaxed policies.

My own love affair with this nation has finally encountered its first real conflict. As Sweden’s National Day approached in June, I looked for speeches acknowledging the thousands of lives lost or for Swedish flags at half-mast. Finding none of these, I grieved privately for the souls lost. I grieved for the soul of a nation lost. I grieved for the Sweden, or the idea of Sweden, that I had proudly embraced: of a nation that cares, equally, for all.