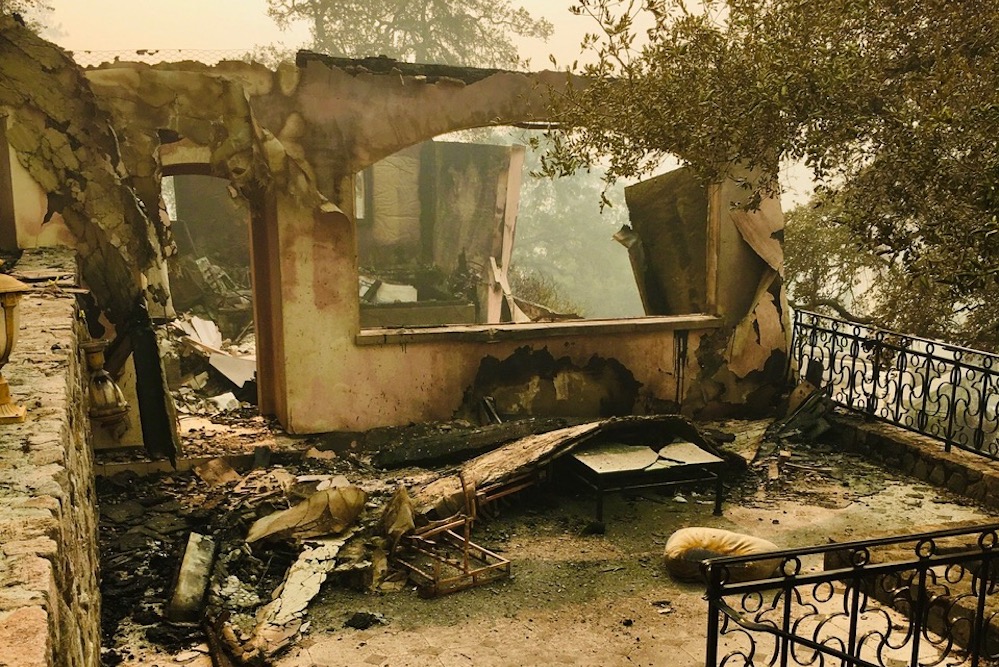 The author's guest house after burning in the Glass Fire. Courtesy of Eileen R. Tabios.

I nearly died last week, which is how I realized: All of my stories are about love.

It was about 3 a.m. on Sunday, Sept. 27, and my husband Tom and I were asleep. My nose twitched and I thought, How odd to smell something burning. I assumed I was dreaming and kept my eyes closed.

I immediately opened my eyes—a burning scent and a boisterous wind do not a good combination make. I looked out the window and glimpsed the last thing I wanted to see: small embers falling in air. I recognized them as embers because they were orange. An intolerably pretty orange. A color not associated with the darkness of a normal night.

I didn’t yell, only because I didn’t want to accept what I recognized. But I did speak loudly enough to wake my husband: “Fire!” Later, I’d learn that the conflagration had a name—the Glass Fire—that it had started in our neighborhood, and that it was devastating tens of thousands of acres across Northern California’s Napa and Sonoma Valleys.

Tom jabbed the fire alarm buttons. We threw on yesterday’s clothes and rushed out of the bedroom. I stopped in front of the windows overlooking the courtyard when I saw flames perhaps 75 feet away. I was stunned. The hillside facing our house was on fire. Tom sprinted to the front door. He ran outside to turn on the fire suppression system’s sprinklers.

I forced myself to move, running to the basement to grab the cat carriers. We have three dogs and three cats. While the confused dogs remained by my heels, the fire alarm’s reverberating wailing din had sent the cats scurrying to various hiding places.

I looked, but I couldn’t find the cats. I opened the front door and found myself facing flames larger than they’d seemed moments before. I ran across the courtyard yelling for Tom, but the gray smoke filled my mouth, made me cough, and muffled my voice. I had to run back inside the house to breathe.

As I coughed, I mentally exhorted myself: Stay. Calm. Perhaps I would have panicked, but I faced three worried dogs I needed to evacuate: Ajax, Neo, and Nova.

I inhaled, pushed open the front door again, and ran back across the courtyard to the garage.

The flames looked even larger and, offensively, prettier. I backed the car out and pulled up to the front door. I screamed again for Tom—he later told me he’d been watering flames near one end of the house—and when I finally saw him, I shouted, “We have to leave!”

I kept the car running as we both rushed back into the house. Tom scooped up an empty cat carrier and began to look for Tarzan, Addie, and Suki. I was already holding another carrier when Tom suggested I take the dogs and go. He would stay to find the cats, and follow separately in his car.

I paused to look at him. This time, I didn’t just stay calm. I became cold. I assessed the risks while Tom searched the room. I’d turned 60 earlier in the month. Sixty is an interesting number of years—one hopes to live longer, but it also suffices as a full life. I realized that if I expired at that moment, I would have had a great run because of Tom’s contributions to our shared life.

If I left ahead of Tom, I might have a better chance of survival, but I didn’t prefer a life without him. Suddenly, I understood why couples who’d lived long lives together sometimes died in short succession.

Coldly and firmly, I announced, “I am not leaving without you.” I raised my voice and said it again, with a silent apology to the nearby dogs I presumably could save: “I won’t leave without you.”

But though I’d thought to apologize to the dogs, I really should have apologized to the cats whom Tom would not, on his own, have left behind. Forced to choose between his wife and three dogs on one hand and three cats on the other, however, he received a reason not to stay.

Coldly and firmly, I announced, “I am not leaving without you.” I raised my voice and said it again, with a silent apology to the nearby dogs I presumably could save. “I won’t leave without you.”

We rushed back into the courtyard. Tom helped put the dogs in my car, then ran to the garage to get his car and lead our drive down the winding, one-third-mile road from our house to the gate. As it turned out, I might not have been able to make it on my own. I couldn’t see through the gray, ashy haze. But I could see the dim yellow tail lights on Tom’s car and stuck to him like… well, like white cat fur on a black sweater.

Later, Tom told me he also couldn’t see through the smoke, which was why we crept forward at about one mile per hour despite desperately wanting to rush away. It would have been disastrous for our cars to veer off of the asphalt road cut into the mountain. Tom said he felt the car wheels nearly slip off the edge a few times. He made it down safely, partly through muscle memory and partly because he understood that those of us in the car behind him depended on him.

Tom led us through the gate, and we continued on to the parking lot of our local Safeway. He then told me he was going to return to the house to find the cats and show our fire suppression system to the firefighters, who had converged near our gate at the bottom of the mountain.

This time, I didn’t protest—he would be in the company of well-equipped firefighters. I also understood he needed to make another attempt; it was not in Tom’s character to give up easily.

Tom later returned with the cats. It required half an hour to find them all. Addie had stowed away in a cabinet, Suki had burrowed in a closet, and Tarzan had hidden under bed cushions.

Tom also returned with the depressing news that while our primary residence was safe, our guesthouse had burned down. The “guest house” was actually a library that happened to contain a bed. In this library were critical components of my archives as a writer, poet, artist, editor, and publisher. 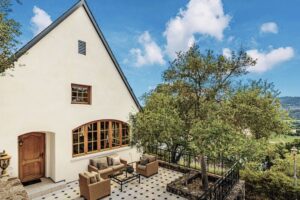 The author’s guest house before the Glass Fire. Courtesy of Eileen R. Tabios.

Here are some of the items that burned:

—two decades of notes for, and various false starts on, what will be my first novel, DoveLion, which will be released in 2021;

—about a thousand books, including inventory from Meritage Press, a literary and arts publisher I created in 2001;

—the entire series of The Asian Pacific American Journal, for which I was editor in the 1990s;

—nine personal diaries focused on encounters I had with poets and artists, including original work by some of them, like a bird drawing by the late poet Philip Lamantia, scribbled over lunch at a cafe near City Lights in San Francisco;

—drawings, small sculptures, and photographs from my poetry performance, and exhibitions related to my project “Poems For/From the Six Directions”; and

—copies of and correspondences for Black Lightning, a book I’d edited that is significant for being the first anthology of Asian American poets detailing and discussing the progress of poems from first to last drafts.

There was more, as well, in my library’s six floor-to-ceiling bookshelves and dozen four-foot-wide file cabinets. Recalling my library’s contents, I realize again that Tom has given me a great life, but so has another love: the love for, thereby the love of, poetry.

We (like other evacuees) have not yet found housing for the months ahead; it will take time to address the toxic aftermath of what’s burned and make our property livable again. We are temporarily in San Francisco. As I write, Tom is on the phone dealing with the insurance company and contractors for rebuilding. At our feet lie three sleeping dogs, and on the bed three sleeping cats.

The Glass Fire still burns, and our house—with even more books and archives—remains at risk. But looking around, my legs itching from wearing the same pair of jeans in which I fled the fires five days ago, I am moved by how much that has formed my life has been love—making me even more thankful and humbled to be alive. No wonder everything I write is fueled by love—a love that burns hotter than fire.