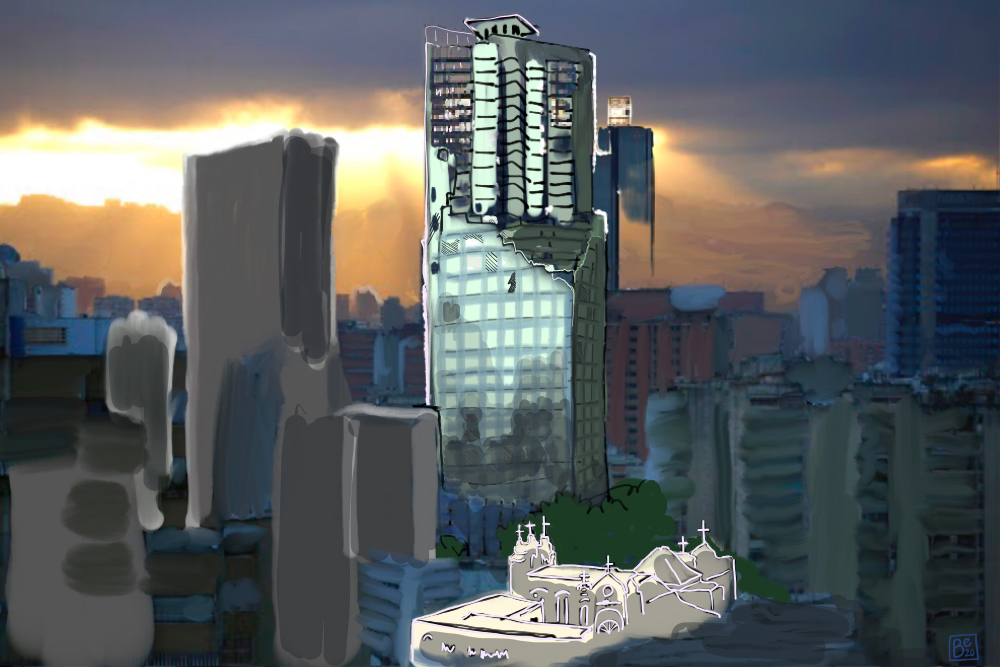 There’s a certain absurdity that comes with trying to explain—in calm, simple, and objective words—a life that has become too strange to be real. At least, that’s how I feel when talking about my home country, Venezuela, where a small bottle of water has become more expensive than a barrel of gasoline, law enforcement officials are afraid to enter prisons that are ruled by criminal gangs, and the minimum wage is less than five American dollars per month.

Sometimes, when I try to put facts and events in order, I struggle to believe it myself. I wind up explaining the situation over and over like some kind of mantra: how, for instance, we ended up with two presidents at the same time, both with disputable legitimacy—one recognized by most of the Western hemisphere, the other by Russia, Cuba, Turkey, and China.

The current pandemic only adds another inconceivable layer to an already exhausted country. The official toll has gone from 1,662 cases in early June to 19,443 at the beginning of August to 85,005 in mid-October, with no signs of slowing down. Limited testing capacity and political pressure hint at more dire figures to come. Yet state media shows how to make face masks from paper tissues. Despite the slow-motion collapse, keeping up appearances remains the top priority.

When reality turns this surreal, fiction may be the best tool to try and make sense of it. Narratives about injustice, exploitation, and authoritarianism have long helped us to shape, voice, and comprehend our real-life nightmares. Speculative fiction in particular, having the advantage of being divorced from the constraints of the real world, can be the ultimate playground to explore these social and political realities.

George Orwell’s 1984 is, without a doubt, the most prominent work to use speculative fiction to explore such themes. But the book that for me hits closer to how life in Venezuela feels is the 1975 dystopic novel High-Rise.

Written by J.G. Ballard (who, as it happens, was another English man born in a former British colony), High-Rise can be read as an elaborate allegory for what happens when a society—particularly a modern, liberal democratic one—fails, and all pretensions of a caring, stable order are dropped. What is left are some of the worst vices and basest impulses this order has fostered: Get ahead, get even, stand your ground, take back what is yours.

As soon as the residents begin settling in, the flaws in Royal’s all-encompassing design start to show through: The garbage chute gets clogged; the power goes out in some parts; water becomes irregular. Royal dismisses these problems as merely part of the adaptation process. A statue terrace with a playground on the roof—too rough and risky for actual children to play in—perfectly sums up the lack of human consideration on Royal’s imposed vision.

In this sense, Royal is no different than any ruler demanding faith in himself and his vision for society, no matter how narrow-minded or impractical. But unlike, say, Orwell’s Big Brother, Royal has no need to actively coerce his residents or persecute the dissenters, at least not at first. He lets the structure he’s created take care of that. “By its very efficiency,” Ballard writes, “the high-rise took over the task of maintaining the social structure that supported them all.”

Some enjoy the brutal power they have gained within anarchy, while others try their best to cling precariously to whatever remains of the social order and its increasingly meaningless bourgeois signifiers.

In theory, all the residents of the 1,000 apartments have the same rights and benefits. Ballard describes them as “well-to-do and well-educated proletariat of the future boxed up in … expensive apartments with their elegant furniture and intelligent sensibilities.” But as the structure holding them together starts to fail, the social order also breaks down. People start to skip work to spend time in their apartments. Parties last for days, and the sense of time becomes loose. Resentment and distrust take their toll, with small differences ballooning into irreconcilable points of contention.

Locked away in his penthouse, Royal, the architect, insists on maintaining his vision, even as the tensions among residents become unbearable. Finally, the lower floors fight back in protest against the upper ones. At first, these attacks are in a subdued manner: throwing garbage off their balconies to hit the cars of top-floor residents lined up in front of the building, or breaking the swimming pool rules. But soon, things turn violent. Raiding parties assault rival floors to get food and other necessities. Liberated from the social order, life in the high-rise turns into equal parts bacchanal and guerrilla warfare.

The most compelling part of the story to me is that despite society crumbling around them, with infrastructure failing and food becoming scarce, people won’t leave the building. Some enjoy the brutal power they have gained within anarchy, while others try their best to cling precariously to whatever remains of the social order and its increasingly meaningless bourgeois signifiers.

I don’t need to imagine any of this, because I have lived through it. The past decade in Venezuela has been marked by the collapse of the new society that many imagined the Bolivarian Revolution was building, with shortages and violence becoming all too common.

Currently, more than 90 percent of the population lives below the poverty line. For most, getting basic foodstuffs is a constant struggle—while wealthier people show off American cereal boxes and Nutella jars as status symbols on social media.

Gangs and irregular armed groups lord over many poorer and rural communities, sometimes with the tacit agreement of Maduro’s government. Prisons have nightclubs and supermarkets better stocked than those outside. A U.N. report found more than 5,000 killings by special forces in 2018, turning the government into simply the biggest faction, retaining power through abuse, violence, and intimidation.

Yet just like in High-Rise, where those who are able to do so hide away in the locked penthouse, clinging to small markers of something resembling a normal life, many Venezuelans have also tried to maintain the paper-thin illusion of a normal life in a normal country. Whether out of necessity, responsibility, a desire for distraction, or staving off despair, baseball games were still played in empty stadiums, beauty contests were held in increasingly decadent fashion, morning television was filled with cooking shows nobody can afford or find the ingredients for.

It’s tempting, too, to see in the character of Royal, a Hugo Chávez or a Nicolás Maduro. The former came to power in 1999 under the promise to build a new society, supported by oil wealth. When flaws started to appear—corruption, cronyism, political favoritism, tighter controls on the media and the economy—these were excused as necessary for the making of the Bolivarian Revolution. Likewise, in the first half of the book, Royal dismisses increasingly serious problems in his design as mild “teething problems.”

Chávez’s successor, Maduro (whom Chávez anointed before dying of cancer in 2013), has insisted on following the same path, despite lacking the revenue and popular support to do so. He deploys any means necessary to remain in power, from police repression to cracking down on opposition parties, putting more docile figures in power, and barring, expelling, or jailing dissidents.

Chávez was elected just seven years after he had tried to stage a coup against a democratically elected but increasingly unpopular president of a liberal democracy that many felt had failed to its people. Some thought at the time that Chávez and his Bolivarian Revolution were a throwback to a time when Venezuela and the rest of the continent were ruled by charismatic military leaders. But now, I can’t help but wonder whether the death of liberal democracy in Venezuela was prophetic of the age we now live in.

Around me today, I see a growing—and not completely undeserving—disappointment in the Western hemisphere toward liberal democracy and its capability to address economic inequality, its supposed foundation of individual freedom and equality that is belied by actions, and the rise of far-right fringe movements heralding a more fractured society filled with resentment, distrust, and tribalism. With COVID-19, which itself seems pulled out of science fiction, this process of decomposition seems to have accelerated rather than slowed down.

It’s no surprise that in the past two decades or so, fiction concerning dystopian themes has grown in number and audience while utopias—in fiction or as a more serious thought experiment—seem to have disappeared. Utopias and dystopias offer vastly different conceptions of what society could be, but both are born from the problems and anxieties that affect people at a given time and place. The rise of dystopic books and movies could be because of the utopias of the 20th century that turned out to be obsolete, unfeasible, or outright nightmares. But it may also be because of the difficulty of imagining how to dismantle the structure we all live in. Whichever it is, it’s clear that speculative fiction is being used more than ever to explore these issues—but doesn’t necessarily offer a solution.

Perhaps the attempt to provide an answer to the questions raised in these works would come off as arrogant and deceitfully easy, particularly in a time where we distrust the idea of a better world. Ballard’s High-Rise was written 45 years ago, and what makes it so current and intriguing—speculative fiction without any real speculative elements—is that the residents of the building (with the doubtful exception of its architect) never have the illusion they’re living in an ideal society built on values of community and interdependence; instead they’re 1970s middle-class homeowners that take their social neuroses to the extreme. As Ballard writes, “the high-rise was a huge machine designed to serve, not the collective body of tenants, but the individual resident in isolation …”. Ultimately, it’s a body of individuals, living and abusing each other in a flawed structure they cannot dismantle without destroying themselves.

At the end of the novel, the high-rise lies in ruins. Royal is dead and with him the status quo that made the building possible. Wilder, the guerrilla documentarian, whose idea of making a documentary about the high-rise’s descent to chaos turns into an obsessive quest to reach to the top floor, is also dead after his Pyrrhic victory of finally reaching the penthouse.

Laing could be seen as a victor, in the sense that he has managed to survive the structure. Not by his conviction to an idea—like Royal or Wilder—but by his self-erasure, disappearing into the organism that is the high-rise. The book ends where it starts, Laing is eating a piece of roasted dog, he looks out at a neighboring high-rise where one floor has just gone completely dark. “Laing watched them contently,” Ballard wrote, “ready to welcome them to their new world.”