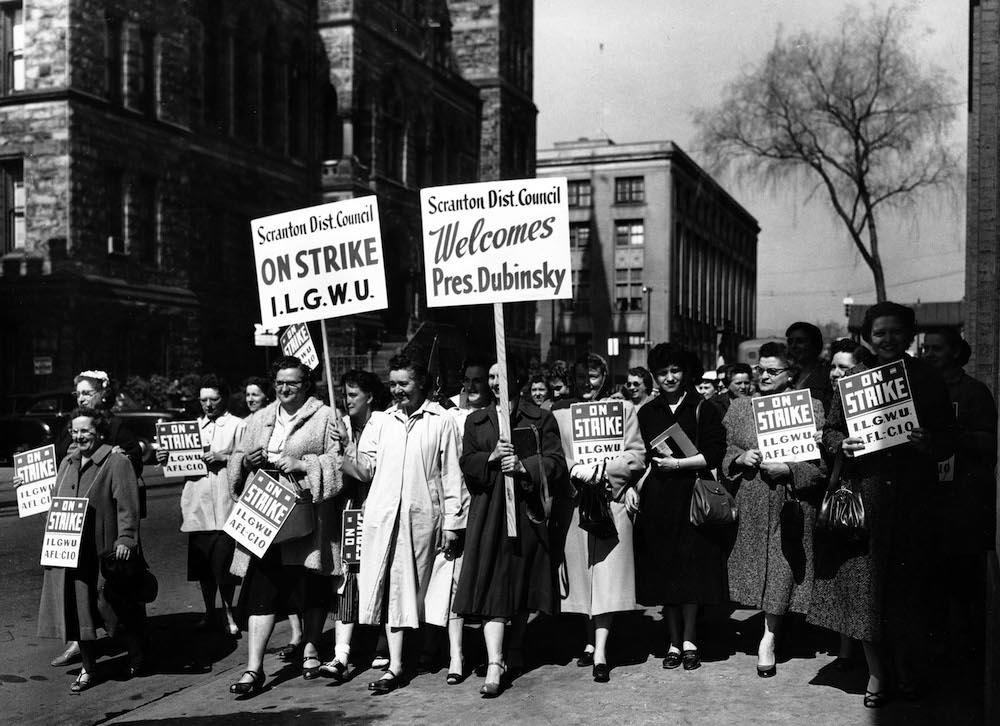 Labor leader Min Matheson was an inspiration to the garment workers she organized in Pennsylvania’s Wyoming Valley. Here, ILGWU members picket in Scranton in 1958. Courtesy of Kheel Center, Cornell University.

Labor leader Min Lurye Matheson made her name facing down the mob. She arrived in Northeast Pennsylvania in 1944, dispatched by the International Ladies Garment Workers Union, or ILGWU, to organize the hard-pressed garment workers of the Wyoming Valley anthracite coal region. Here, in towns with deep mob roots such as Pittston, she soon observed first-hand “the system,” an election day practice in which women signed the polling roster but had their husbands cast their votes—all under the watchful eye of authorities controlled by Russell Bufalino, the gangster depicted in Martin Scorsese’s 2019 film The Irishman.

The “system” had long gone unchallenged, but Matheson saw it as the underlying barrier to her fight to secure worker rights. To confront the corruption, she selected a polling site at the heart of Bufalino’s territory, sending a Pittston woman named Carmella Salatino to the polls on election day. Salatino refused to sign the election roster unless she could cast her own vote privately, with her husband standing by in support outside the booth. With Matheson’s encouragement, the Salatinos stood their ground for hours against the pressure of Bufalino’s “poll-watchers.” They ultimately backed down, but they had made a crucial first step toward change, and it would not be long before Matheson and the women workers of Pittston overcame voter suppression in the town. Later, through efforts like 1958’s Dress Strike, ILGWU members asserted the union’s control over Pennsylvania’s garment industry, and mob-controlled businesses diminished in power.

Matheson’s career with the ILGWU extended from the 1940s to the 1960s, and she frequently combated organized crime interests in the region’s notoriously corrupt towns, alternately ﬁghting against and negotiating with gangsters. Matheson learned the dangers of fighting the mob through personal experience; one of her brothers, Will Lurye, was murdered while trying to organize a mobbed-up ﬁrm in New York’s Garment District. Yet she was an idealist, and while she has become best known for facing off against the mob, Matheson’s primary importance to the labor movement lies in the inspiration she gave to workers she led, and the way she changed attitudes among working-class women of Pittston like Carmella Salatino—turning them into a powerful political force in the region and a respected civic presence. Her gutsy leadership style and unwavering fight for the ideals of organized labor brought a transformative vision of union power to an unlikely corner of America where tradition held sway, and women seldom got a voice. 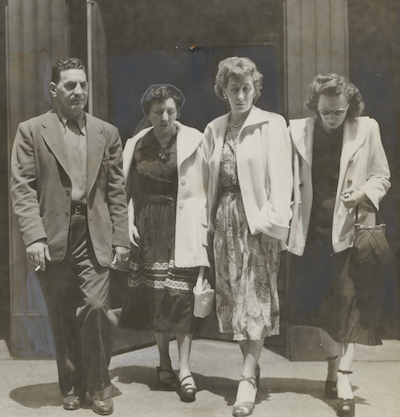 Matheson, second from left, with family, at the district attorney’s office after the investigation of her brother Will Lurye’s murder by the mob. Matheson faced off against gangsters throughout her long career as a union organizer. Courtesy of the Queens Public Library Archives.

In the early 20th century, Northeastern Pennsylvania was a region of small, often isolated townships that had been populated by waves of immigrants who had come to work in the coal mines. For decades the mines had thrived, but by the mid-1940s the coal industry was flagging, leaving families mired in long-term unemployment. Non-union garment factories emerged as an economic lifeline for a desperate workforce of miners’ wives and daughters, who worked long hours under poor conditions, with no recourse and no representation. The workers’ poverty created rich opportunities for garment contractors from New York, some with familial mob ties, who flocked to Pennsylvania for competitive advantage where they could undercut the industry’s wage rates and evade union oversight. This environment, plus very low overhead for entry, presented an opening for mobsters to extend their operations beyond New York and to secure a legitimate front for other illegal activities. The ILGWU sought to stabilize this volatile industry through the enforcement of uniform compensation and working conditions, and it sent Matheson to organize these “runaway” shops.

Matheson was a born organizer who knew she needed to earn trust to organize garment workers, and that she would need to demonstrate the value of the union to their lives, and not just their livelihoods. To unionize would require courage and defiance from many of these women; attitudes in Northeastern Pennsylvania were provincial and patriarchal. “The men had no jobs,” said Dorothy Ney, who worked with Matheson as an organizer. “They were out hanging around Main Street while the women worked.” But though the women were the breadwinners, they were still seen primarily as the caretakers of their households, and their male family members were not always tolerant of their union involvement. Union women who followed Matheson’s lead were subject to demeaning and vulgar verbal attacks, as well as physical threat. In the early days of Matheson’s tenure, husbands and fathers often yanked women right out of the picket lines, and hauled them back home. Organizing these workers required upending long-term patterns of subjugation that reached into the civic, economic, and familial aspects of a woman’s life.

These women’s political realities bore little resemblance to the ideals of American democracy that Matheson upheld, and showed why targeting voting abuses became one of her first efforts. For Matheson, one’s right to vote was an underlying principle of social democratic unionism—an ideal that emphasized workers’ political and economic rights. Whether recruiting workers to the union cause or dressing down a made member of the mob challenging her at the picket-line, she often delivered what she called “her little lecture on democracy.” In it, she held that the electoral process was an essential precursor to establishing democracy in all aspects of a working person’s life. “Having the right to vote doesn’t make it democratic,” she insisted, telling women they also had to exercise that right, and to push for justice at work. “If you don’t have a labor union or you don’t have an organization to represent you on the job, you’re really being denied your rights, your democratic rights.”

The Pittston voting gambit was a crucial first step that put the community and the local mob leadership on notice, and demonstrated Matheson’s fearlessness and solidarity with the rank-and-file. An outsider from Chicago, Matheson grew up in a fiercely progressive household with a union activist father who had his own violent encounters with thugs and racketeers. All seven Lurye children attended Socialist Sunday School, and young Min often joined her father at union rallies. Her parents frequently sheltered radicals in their home, including Emma Goldman. Matheson’s mother became adept at deflecting police searches during the inevitable raids on their home. “Dad wouldn’t work at anything, I don’t care what it was, without getting others who were also doing the same thing together,” Matheson later recalled.

It was an active, politically engaged climate, and Matheson developed a deep commitment to social justice during her youth. She became a zealous member of the Young Workers’ Communist League, where she met her life partner Bill Matheson—though the Mathesons both broke with the Communist Party when they saw Soviet interests superseding the interests of the American workers they organized. That, and her brother’s murder, distilled her shrewd assessment of ideologues and authority, and galvanized her personal sense of justice.

Matheson’s direct experience with personal loss in the fight for labor was highly relatable to the women of the coal region. Oral histories from the women who organized with Min show that they felt her deep commitment to their cause, and they treasured their hard-won status. Many recalled their time in the union as life-changing, and imbued with purpose. They never wanted to go back to the days of “no representation, no protections,” and they often spoke of Matheson’s courage and loyalty. “If we didn’t have somebody like Min Matheson with us, I believe we would have given up because she was so strong and she was down there with us,” Minnie Caputo, who joined Matheson’s organizing team and helped fight the mob in Pittston, told an interviewer. “We knew when we were in a shop how she fought for every girl and you weren’t gonna give all that up. It would be foolish for us after she fought so hard.”

And they refused to go backward. The ILGWU’s Northeast District grew from 404 members in 1944 to 11,000 by the late 1950s, with more than 250 union factories. As representatives of their shops, a growing number of elected chairladies and secretaries flocked to the union’s monthly meetings. “They loved to hear Min talk,” Ney said. “Whatever she believed in, they believed in.” And Matheson’s ILGWU, with Bill Matheson as director of education, cultivated active political and civic engagement. Union members took on leadership roles on the shop floor, joined school boards, and participated in local democratic party politics. In 1957, Pittston’s mayor instituted a “Garment Workers’ Day” to recognize their contributions to the community.

Matheson’s leadership transformed oppressed garment workers into constructive members of society, with status and dignity. The ILGWU Northeast District’s educational and recreational programs supported local charity drives and created a union newsletter and a radio program, which—typically written by Bill—were notable for their candor, humor, and accessibility. Matheson launched a mobile healthcare unit that traveled throughout the region to serve the needs of the union’s more remote members—the first of its kind. And, to enhance the public perception of the union and provide a creative outlet for members, the Mathesons formed a highly popular chorus, which performed to audiences in venues throughout the area. These activities were guided by principles of community engagement and empowerment—Matheson understood that her members would gain good standing in the community by becoming a visible and vocal presence invested in contributing to the common good.

After Matheson’s retirement, she lived on a meager union pension and sought to rejoin the ILGWU to organize part-time, hoping to help train a new generation of union activists. The ILGWU did not accept the idea, however, and Matheson died in 1992. Now, in 2020, only about 8 percent of the private sector workforce in the U.S. is represented by organized labor and the vast majority of workers lack the union-won protections Matheson championed. Matheson observed this diminishment in the ILGWU as early as 1988. “I feel that a union has to be constantly on its toes and force conditions to see that the employers live up to their agreement, and the girls have pride in their organization. Otherwise the whole concept of unionism just withers and dies, and I wouldn’t want to see that,” she reflected in a 1983 interview.

We now see the impact of the long neglect and decline of union power today in the challenges faced by workers, and front-line workers in particular, during the COVID-19 crisis. With decades of complacency toward worker protections on full view today, it’s time for a return to Min Matheson’s empowering message, and to reclaim the rights she and her members fought so hard to achieve.