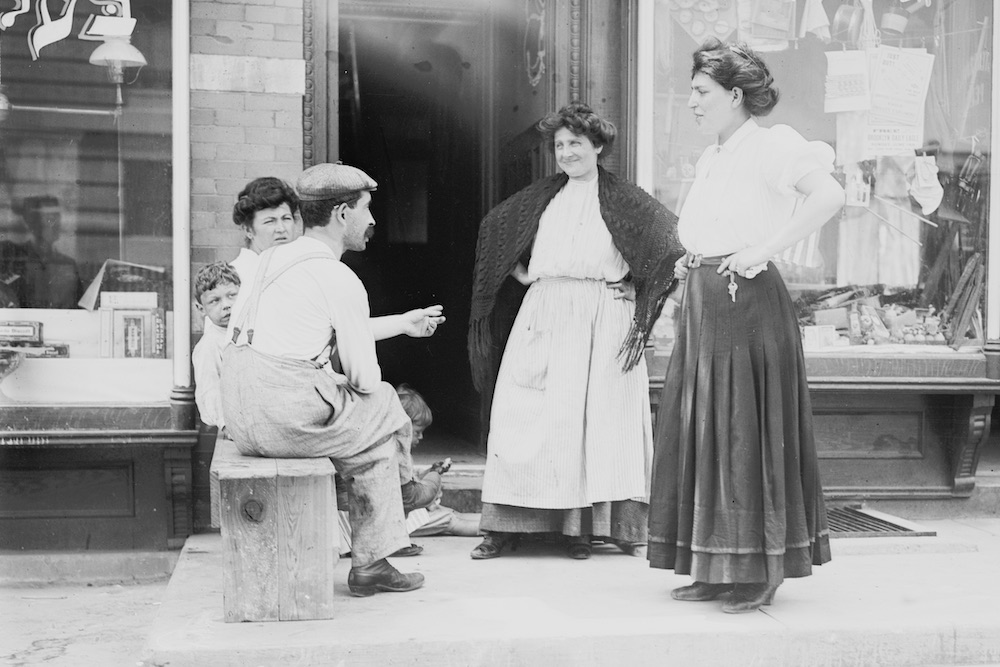 Mrs. Perlmutter and others arguing the price of meat. Courtesy of the Library of Congress Prints and Photographs Division.

Sarah Edelson had been pushed too far.

The price of the kosher meat that she and most of the half million or so Jewish homemakers on Manhattan’s Lower East Side fed their families had risen 50 percent over the previous few months, from 12 to 18 cents a pound. That suddenly put this staple out of the reach of most Russian and Eastern European immigrant Jewish families, whose breadwinners took home only about $10 a week in 1902.

Non-kosher meat was cheaper, of course, and widely available. But it was simply not an option for observant families like Sarah’s, duty-bound by history, culture, and religion to honor the exacting Jewish laws specifying which foods were permitted and how and by whom they had to be slaughtered and prepared. Nor was this 50-year-old mother of six, a resident of America for 34 years, willing to face a future of meatless meals.

Wholesale prices began to climb steeply for the several hundred kosher butchers in the Jewish quarter—then the most densely populated neighborhood in the nation—at the very beginning of 1902. Their patrons, mostly women, had fully supported the butchers when, on May 10, they staged a shutdown to pressure their local slaughterhouses into lowering rates. But although they were able to extract some modest concessions, they made no progress on the central issue, the price of meat. When the butchers reopened on May 14 and the women discovered that despite the givebacks they were being charged even more than before, they accused their butchers of price gouging and became enraged.

That same day, Sarah Edelson called a meeting at her family’s Monroe Street saloon to discuss the matter. She expected 50 fellow homemakers. When more than 500 showed up, the talk turned to activism. It was her neighbor, 35-year-old Fanny Levy, who summed up the mood in the room. “This is their strike?” she noted sarcastically of the butchers’ shutdown. “Let the women make a strike; then there will be a strike!”

And a women’s strike there was—or, rather, a boycott. By the wee hours of the next morning, some 3,000 housewives had assembled in squads of five on every block on the Lower East Side with a kosher butcher shop. When the businesses opened at 7 a.m., the pickets waved off all customers, imploring people to do without kosher meat until the butchers brought prices back down. 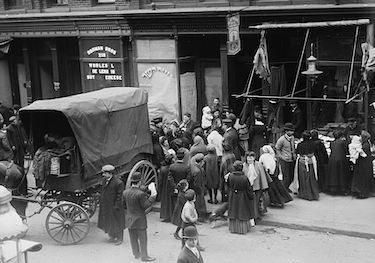 Crowd gather in front of a butcher shop. Courtesy of the Library of Congress/George Grantham Bain Collection.

What was supposed to be a nonviolent effort did not remain so for long. Those who insisted on entering the shops were heckled and, on their departure, assaulted. Their parcels of meat were confiscated, hurled into the gutters and sometimes doused with kerosene. Butchers were goaded into closing, and those who refused were attacked. Their inventory was destroyed and in many cases their windows and fixtures were smashed. Brutal blows from police nightsticks sent demonstrators to local hospitals and to court, but neither flesh wounds nor stiff fines deterred them.

The street protests ceased temporarily on Saturday, May 17, the Jewish Sabbath, but it was hardly a day of rest for the women. They used the respite to visit neighborhood synagogues and prayer halls in pairs. They challenged ancient traditions by interrupting worship services and mounting the platforms from which the Torah was read—normally off-limits to females—to solicit support from the mostly male worshippers. And although on one or two occasions they were greeted with hostility for this impropriety, for the most part their message was well-received, and the vast majority of congregants pledged to support the boycott.

Although many of the women had been in the United States for only a short time and could not manage much English, they had already grasped the power of that most American form of expression: protest.

After the Sabbath, they returned to the streets to make certain no meat was being sold. Their retail butchers laid the blame on higher wholesale prices being charged by the local abattoirs. But the real culprits—those responsible for most of the problem—were actually hundreds of miles away.

This was the era of the trusts—combinations of companies that banded together to control markets. And a “beef trust” had emerged, not unlike the trusts in steel, oil, and railroads. The cartel of Chicago-based meat packers, with names like Swift and Armour, had struck a secret pact to divide territory, control supply, and fix prices. These corrupt efforts were behind the big price increases in New York and elsewhere. The Justice Department of “trust-buster” President Theodore Roosevelt had taken note, and on May 10, the very day the kosher butchers had first shut down, took the packers to court to force them to cease their illegal practices.

Of course, not only kosher meat was affected. Prices rose for everyone. But the Jews were the first to feel the heat because kosher meat was more expensive. Prices had to reflect not only the wages of slaughterers and religious supervisors, but also the cost of transporting live cattle to New York. Because kosher meat had to be salted and soaked in the home within 72 hours of slaughter, it could not, like the non-kosher variety, be killed in Chicago and shipped more cheaply as a carcass.

Against this backdrop, the boycotters formed the Ladies’ Anti-Beef Trust Association and named Caroline Schatzberg, a well-spoken, 50-year-old Romanian-born widow, president. “It will be a question of endurance between us,” Schatzberg predicted. “If the retailers can afford to pay rent and do no business, I guess we can afford to do without meat. We can stand it as long as they can.”

And so the boycott grew. Committees were formed to distribute circulars throughout the tenements; seek support from benevolent societies, lodges, and trade unions; collect money to reimburse those arrested for fines paid; and reach out to other communities. In less than a week, Jewish homemakers in the Bronx, Brooklyn, Harlem, and Long Island City had taken to the streets in solidarity and shared frustration. 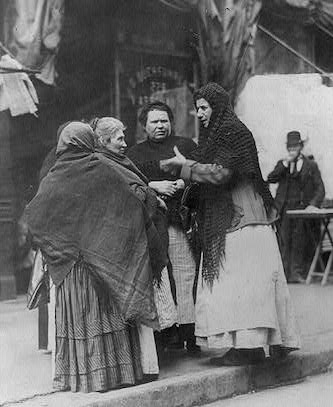 Discussing the price of meat during the boycott. Courtesy of the Library of Congress Prints and Photographs Division.

The newspapers, by and large, were sympathetic. “It is impossible not to feel a touch of patriotic sympathy for the East Side housewives,” declared the New York World on May 16. “Their method was censurable, but their motive was unselfish and even heroic.” The socialist, Yiddish-language Forward cheered them on with the banner headline, “BRAVA, BRAVA, JEWISH WOMEN!” Only the New York Times, under the editorial control of assimilated German Jews inclined to see the protestors as threats to their own acceptance among America’s gentiles, dismissed them as “a dangerous class” who “do not understand the duties or the rights of Americans.”

The Times was certainly within its rights to censure them for the violence, which no responsible voice inside or outside the Jewish community condoned. But the paper was quite wrong in its assessment of their degree of Americanization. Although many of the women had been in the United States for only a short time and could not manage much English, they had already grasped the power of that most American form of expression: protest. With little experience and few resources at their disposal, but with steely determination and a clear understanding of the common threat they faced, they asserted their collective power as consumers, found their political voice, and challenged powerful, vested corporate interests.

As the Brooklyn Daily Eagle put it at the time, the women “seem to have imbibed a fundamental principle of Americanism as quickly as any earlier [immigrants] did. They decided that they were unjustly taxed, or charged, which amounts to the same thing for the person who pays, and they went out to find a means to remedy the injustice. They found it. Their proceeding was not within the letter of the law, but neither was the Boston Tea Party.”

Eventually, and perhaps inevitably, control over the boycott would pass into the hands of men. Husbands and fathers first got involved after seeing women clubbed and jailed by police. The Ladies’ Association’s efforts to recruit other Jewish groups to join them resulted in the formation of a second, male-led organization, the Allied Conference for Cheap Kosher Meat, on May 21.

The Allied Conference brought in several rabbis to negotiate directly with the local slaughterhouse bosses, who bore some responsibility for gouging and were now being vilified as the “Jewish Beef Trust.” Their goal in raising prices had been to raise profits, but, after three weeks of boycott, they agreed on June 3 to lower prices, although they refused to say for how long. Conference leaders then offered to permit those butchers who pledged to return retail prices to previous levels to reopen. Not everyone was entirely happy with the solution because it did not include a long-term commitment to affordable prices, but it did put kosher meat back on Jewish tables.

Their cause won, Sarah Edelson, Caroline Schatzberg, Fanny Levy, and their compatriots sank back into the obscurity from which they had emerged. Although they were not remembered, their boycott would linger in memory, and be recalled as the vanguard of homemaker-organized Jewish activism in America. After it was over, immigrant Jewish women needed no further persuading that they were capable of uniting and effecting change in their new homeland.

The spirit and grassroots tactics of the Great Kosher Meat Strike of 1902 would be applied successfully in the early decades of the century in rent strikes, community protests, labor actions, and suffrage demonstrations. Even today, their influence can be felt whenever consumers unite to protest an objectionable corporate policy, a lapse in ethical behavior or, as in 1902, a most unwelcome rise in prices.