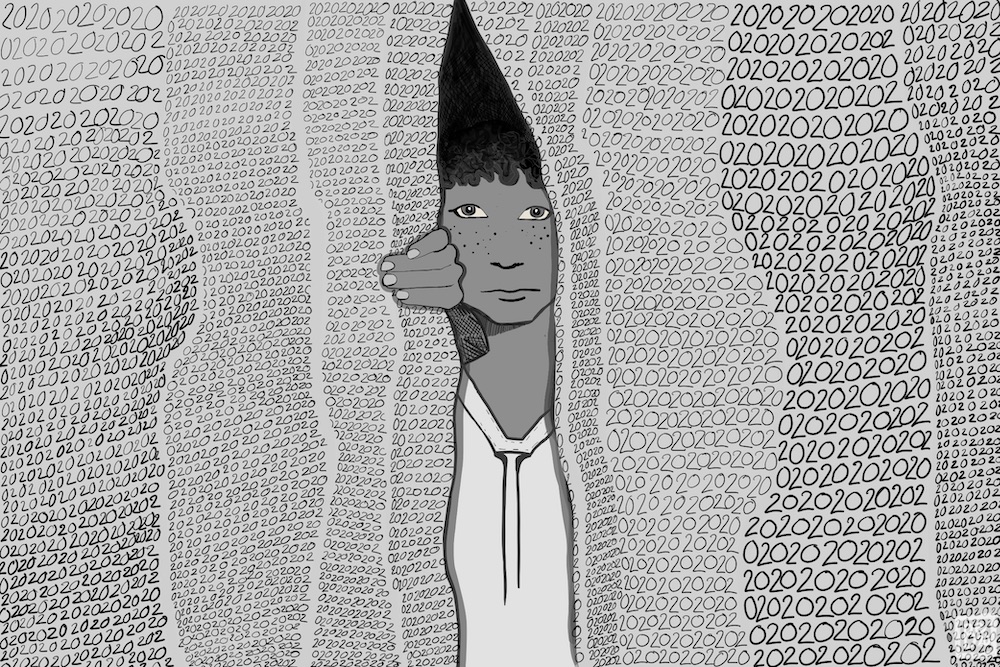 The Centers for Disease Control and Prevention announced the first U.S. death from COVID-19 on February 29. Within a month, more than 1,000 Americans were dying on a single day. Since then, we’ve reached that daily number many times over. Some days, more than 2,500 people have died. The U.S. recently surpassed another marker: over 277,000 individuals dead.

And yet: many are largely disconnected from the pain, unwilling or unable to recognize or process the loss.

Where is the collective mourning? I am an empathy scientist, and I can report that we are not a nation of psychopaths. People have a limited capacity to process mass suffering, rather than a callous lack of care. Cognitive biases—common errors in thinking—make it difficult to process tragedy of this scale over time, creating a sense of psychological distance between us and the number of COVID-19 deaths. By understanding how various cognitive biases work, however, people can train themselves to feel the weight of our country’s losses again.

Several types of cognitive bias are warping Americans’ ability to process COVID today. First is the numeracy bias, the brain’s inability to wrap itself around large numbers. I logged onto Facebook recently and was saddened by a message from one of my friends announcing the death of his cousin from COVID-19. My friend wrote that behind every statistic, there is a person and a family—and that this time, it was him. He was echoing a popular quote: “A single death is a tragedy; a million deaths is a statistic,” which has been attributed to Stalin. The quote demonstrates something that scientists have long known. We can easily feel empathy for specific individuals, especially those who are close to us. But as these individuals turn into groups, our empathy is diminished. Their suffering becomes more emotionally distant and abstract, and turns into a statistic. And people are not good at reasoning about statistics.

We don’t like to think of ourselves in this cold way. In studies, participants predict that they would feel worse if thousands of people were victims of a tragedy, compared to only a few. That reaction, they feel, is the morally right response. But in reality, most of us experience an “emotional flatline,” with no greater feelings of sadness as the death toll from a tragedy grows—as long as we are not personally affected.

Paul Slovic, a leading researcher on numeracy bias, writes, “Just as we don’t notice the difference between 30 lit candles and 31 lit candles, our feelings do not register the difference between 30 deaths and 31 deaths.” In typical numeracy bias studies, some participants read a passage about an individual victim (“Rokia, a 7-year-old girl facing starvation,” for instance), while other participants read about an unnamed group of children, experiencing the same tragedy. When asked to donate money to help, study participants who read about the single victim are more likely to give than those who read about the group. In one study, Slovic found that even moving from one to two victims reduced emotional responses and donations.

Another cognitive bias at work during the COVID crisis is the ostrich effect: people’s tendency to avoid negative information, including everything from bad financial returns to another person’s misery. Daryl Cameron is a scientist at Pennsylvania State University who studies compassion avoidance. In his studies, he shows participants pictures of distressed people, such as refugees. Immediately afterward, participants can then choose to “try to feel what the person feels” and “empathically share in the internal emotional experience of the person,” or they can choose to simply describe external details about the picture, such as the person’s age and gender. Participants choose empathy only 36 percent of the time. Cameron’s research shows that people actively try to suppress their emotions to avoid feeling overwhelmed in the face of mass tragedy. Sometimes it’s easier to avert our eyes in the face of others’ pain.

This may be because of a sense of helplessness, common in the face of mass tragedy. Even if we want to help, our actions never seem to be enough. In “The Eleventh,” the classic short story by Henri Barbusse, a servant invites 10 people into his master’s palace-hospital each month, but has to turn away the 11th. At first, he enjoys being able to help the 10, but soon closing the door on the 11th person becomes torturous. This story highlights the dangers of becoming overwhelmed by those we cannot help, rather than focusing on those we can.

Time messes with our concrete sensory brains, too. The recency effect creates a crippling nearsightedness, where events that are closer to the present are more vivid in our imaginations. A process called hedonic adaptation numbs us to the pandemic’s rise over time, as one death per day becomes 10 deaths per day, then 50, then 500, then 1,000, then 2,000. While COVID seemed to have taken over our lives very quickly, the number of deaths accelerated and then crept up or down subtly over weeks and months, giving people time to get used to the new normal, and dulling their emotional response.

We are not a nation of psychopaths. People have a limited capacity to process mass suffering, rather than a callous lack of care. Cognitive biases—common errors in thinking—make it difficult to process tragedy of this scale over time.

Vivid experiences can skew perception by activating a type of cognitive bias known as the availability heuristic, the tendency to overestimate the prevalence of events that more easily come to mind. This type of bias is the reason people worry about airplane crashes and terrorist attacks, which generate countless dramatic news clips that make them easy to picture, despite the fact that they are rare and are not among the top causes of death in the US. According to a survey from late August, 27 percent of Americans said that a close friend or family member had tested positive for COVID-19, and 15 percent said that a close friend or family member had died from it. Despite our lives having drastically changed as the summer drew to a close, the vast majority of Americans still had no personal experience with the virus. Yet COVID-19 is now third leading cause of death in the US—after heart disease and cancer. Although statistics clearly demonstrate that the illness is dangerous and deadly, the availability heuristic makes us underestimate the likelihood of events that are not easily available in memory. Since those of us without vivid personal experiences with COVID mainly experience it through statistics in the news, we downplay its seriousness.

So what can we do to counter these deeply ingrained patterns of thinking, and become more sensitive to mass suffering?

To combat numeracy bias, some might suggest thinking more logically would be the solution. Yet, research finds that logical thinking can actually backfire: When it comes to charitable donations, for instance, people driven by logic often realize that giving to individual victims is an emotional response that doesn’t really make sense. A better approach involves expanding one’s sense of compassion so that we can apply it to more than one individual at a time. Some people are better at this than others. For example, those who feel secure in their relationships with others show less numeracy bias. They do not need to know someone’s name or see a picture to understand that a tragedy is a tragedy—even when it affects a group. For more insecure people, thinking of someone (whether a person, an animal, or a deity) who loves them unconditionally can help them extend more compassion to the world, even when events are remote and actors are anonymous. 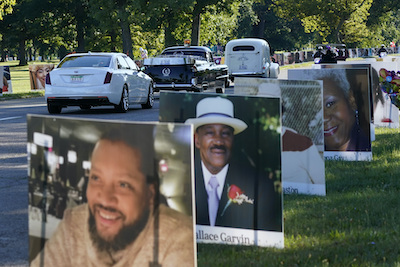 A procession of vehicles drive past photos of Detroit victims of COVID-19, Monday, Aug. 31, 2020 on Belle Isle in Detroit. Courtesy of Carlos Osorio/Associated Press.

Some studies have found that people who have experienced adversity are less likely to show the numeracy bias, and actually feel more compassion for groups, compared to individuals. Shifting into a more interdependent frame of mind can also help people resist the numeracy bias. Focusing on “we-ness”— the simple act of thinking about what you have in common with others—can increase this mindset. Another realistic response is to simply accept that numeracy bias is a part of how our brains work, and focus on individual victims instead of large groups. Public memorials can be helpful for this. At the end of May, when the country reached 100,000 deaths, the entire front page of the New York Times was a list of names, ages, locations, and short descriptions of individuals who had died. It was hard not to be moved; I still think of Rodrick “Rod” Samuels, 49, who “never let anyone mess with his younger brother.” Matching names to faces is also important. One study found that people no longer showed numeracy bias—that is, their feelings of empathic sadness increased along with the number of victims—when they could see pictures of the people affected. The city of Detroit, which lost more than 1,500 people to COVID-19, created a public drive-by memorial in Belle Isle Park with hundreds of portraits and names of victims.

As for the ostrich effect, feelings of helplessness at the scope of suffering can prevent us from acting, but they don’t have to. There are some people who deliberately seek out others in need. These highly empathic people aren’t superheroes or saints, but instead, expect that helping others will feel good. And plenty of research supports this idea, finding that those who feel a sense of efficacy—that they can do small things to help—don’t get as overwhelmed. Such efforts don’t have to be heroic or costly. In the case of the pandemic, we can save lives by hand washing, mask wearing, and social distancing. Focusing on these concrete ways that we can make a difference can help people feel less overwhelmed.

To regain initial sensitivity to the pandemic and combat hedonic adaptation, we can try to mindfully accept negative information. Instead of focusing on the number of deaths yesterday, we can compare today’s total number of deaths—more than 277,000—to the end of February’s—one death—or the first day of Fall—201,000. The contrast may feel more appropriately shocking when tracked this way. And to counter the availability heuristic and make the pandemic’s effects seem more real, we can peruse our social media with renewed focus. Sharing personal experiences with COVID online may be one of the best means available, at the moment, for painting a vivid portrait of the disease—and encouraging people to take CDC-recommended precautions.

Cognitive biases may psychologically minimize the scope of the pandemic, but there are small steps that we can each take to actually minimize the scope of it. Mother Teresa had some sage advice on this front: “Never worry about numbers. Help one person at a time and always start with the person nearest you.” By wearing a mask, washing your hands, staying home whenever possible, and otherwise socially distancing, you are doing just that.