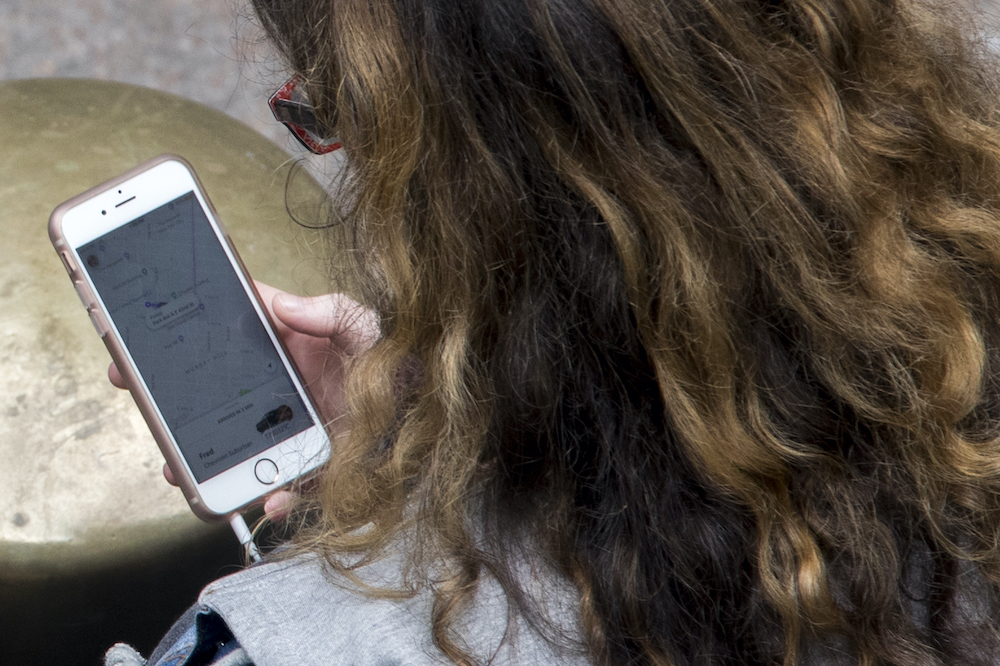 How much longer will Uber, Lyft, and their damaging business model be tolerated? Courtesy of Mary Altaffer/Associated Press.

What would a safety net look like for gig workers at Uber, Lyft, and other companies of the internet-based economy?

It would provide health insurance, naturally, and a retirement plan, sick leave, and injured worker and unemployment compensation. And it would be equitable and portable: A person working part time for a number of different companies would have access to robust benefits that travel with them from job to job.

The good news is that there is a way to design just that sort of safety net. The bad news is that the digital platform companies keep missing opportunities to make it a reality, even as the need for a true safety net for gig workers grows.

Taking advantage of this “independent contractor loophole” lowers a company’s labor costs by about 30 percent, but leaves workers in a lurch and threatens to eviscerate the national employer-based safety net by stranding more workers without benefits. It’s well past time to construct a new kind of safety net that allows workers with multiple employers to get the support they need.

The latest missed opportunity came in California, home state of Uber and Lyft, where these multi-billion-dollar companies refused to negotiate seriously with the California state legislature over establishing good working conditions for their drivers, including a robust benefits plan. So the legislature passed California Assembly Bill 5 (AB5), the most progressive labor law enacted in the U.S. in decades, over the objections of the ride-hailing companies. That prompted Uber, Lyft and DoorDash to spend more than $200 million, a record amount of money on a ballot initiative, Proposition 22, that purported to help workers but mainly enacted rules that will allow the companies to wriggle out of complying with AB5, as well as recent adverse court decisions.

Companies like Uber and Lyft are well aware of proposals to build better benefits systems. Following the publication of my book, Raw Deal: How the “Uber Economy” and Runaway Capitalism Are Screwing American Workers in 2015, I was asked to meet with high-level executives at both ride-sharing firms. A central part of the discussions was my proposal for an “Individual Security Account,” a portable safety net for drivers and for other types of freelance workers.

My idea was that each worker would have a mandatory, government-regulated Individual Security Account, and that any business that hires a worker would contribute an amount pro-rated to the number of hours worked for that business. The worker would then use those funds to pay for safety net needs such as health care, Social Security, sick leave, injured worker and unemployment compensation. Instead of pitting flexibility against security—making a gig worker choose between the work they want and the benefits they need—a portable safety net based on this kind of an “hours bank” system would allow for both.

Such a system would be a significant advance for the U.S., which lags other major nations in providing health care and other social supports. In effect, such a system would modernize the old New Deal support system, which over decades created a system of federal and state supports based on a worker’s employment for a specific employer. Employers became the administrative agent for this comprehensive system, both contributing their fair share into the various social insurance funds for each worker and deducting each worker’s share from their paycheck. This was not a government handout; it was earned benefits paid for by both the employee and their employer.

Transitioning to a benefits structure that isn’t tied to a single employer would be a major shift for the U.S.; fortunately, we already have a working model that can be adapted. “Multiemployer plans,” often overseen by labor unions, collect benefits contributions from more than one employer, operating like an insurance plan by pooling risk and taking advantage of economies of scale to distribute benefits to member workers.

Crucially, multiemployer plans allow mobile workers to earn and retain benefits even as they change employers or jobs, avoiding interruptions in coverage. The Screen Actors Guild, the Service Employees International Union, and the Teamsters all manage these kinds of plans, which are well-suited to serve carpenters, plumbers, and other tradespeople who work for multiple businesses throughout the year. Many actors and directors also are covered by such plans. The Individual Security Account, as I envisioned it, would fill in the gap when there is no labor union to coordinate contributions.

Why can’t these multi-billion-dollar companies, rich enough to spend hundreds of millions of dollars on a ruinous ballot measure, do better by their workers?

President Barack Obama endorsed my idea in his 2016 State of the Union address. Around the same time, 40 business, government, labor and NGO leaders—including the co-founders of Lyft, Logan Green and John Zimmer—signed a statement of principles calling for a portable safety net as a foundation for the future of work in the 21st-century economy. Uber CEO Dara Khosrowshahi also called for enacting a portable safety net plan. In New York, companies set up a Black Car Fund that collects a 2.5 percent passenger fee on every Uber and Lyft trip to provide ride-share drivers with an injured worker compensation benefit.

So it seemed like we had the makings of a win-win solution. But in 2017, when legislative bills were introduced for portable safety nets in the states of Washington, New York, and New Jersey, Uber and Lyft came to the bargaining table with state legislators offering less than pocket change (more like pocket lint). Rather than contributing 20 percent of a worker’s wages—the bare minimum necessary to fund an adequate safety net according to federal actuarial tables that track US worker benefits—Uber and Lyft offered to contribute 2.5 percent. And they wanted contributions to be voluntary. Labor unions and their legislative allies understandably rejected this meager offer. In all three states negotiations collapsed, and the legislation died.

When legislation was proposed in California, Uber and Lyft once again countered with a paltry portable benefits package. Without a serious offer from the ride hail companies, the California legislature overwhelmingly passed AB5, which attempted to solve the problem by reclassifying drivers as employees rather than independent contractors. That law went into effect on January 1, 2020, but Uber and Lyft refused to implement it, leading to multiple lawsuits by the Attorney General of California and other California agencies, and legal judgments against the ride hail companies.

One study found that if their California drivers had been classified as employees rather than contractors these last five years, Uber and Lyft would have paid more than $400 million into the state unemployment insurance fund alone. Instead, California taxpayers have had to foot the bill for the significant wage and benefit gaps created by these companies and their crummy gig jobs. For example, since drivers’ wages are so low (after deducting their expenses), many can’t afford health care premiums and end up in hospital emergency rooms. The public purse ends up paying for that.

Why can’t these multibillion-dollar companies, rich enough to spend hundreds of millions of dollars on a ruinous ballot measure, do better by their workers?

The answer is that Uber and Lyft are in huge financial trouble. They continue to lose billions of dollars every year. Profit margins are inherently low in the taxi business, and their predatory business model subsidizes more than half the cost of every ride in a bid to boost market share and undercut competition. Traditional taxi companies and livery drivers have been pushed to the edge of bankruptcy, and airport shuttle companies have been driven out of business.

Public transportation has suffered, too. Even before the COVID pandemic, public transit ridership in most major cities had declined, as commuters opted for the 50 percent company-subsidized Uber and Lyft rides over the mass ridership experience. One of the most ambitious studies of ridesharing impacts, conducted by researchers at the University of California, Davis’ Institute of Transportation Studies, found that ridesharing results in a dramatic rise in the number of trips made and miles driven in automobiles, as well as a pronounced reduction in the use of mass transit. The study found that if ride-hailing had not been an option for users, approximately 61 percent of trips would not have been made at all, or would have been accomplished via transit, bike, or foot. Add that to the “dead heading” miles that passenger-less Uber and Lyfts are racking up, and the researchers conclude that ride-hailing is boosting Vehicle Miles Traveled (VMT) in cities. All of that contributes greatly to increases in traffic congestion and carbon emissions.

Certainly for the approximately 20 percent of city-based adults who have used Uber and Lyft’s subsidized rides (most of them younger, college-educated, better-off Americans, who use the services twice as much as less-educated, lower income people), this transportation option has been helpful. But for the vast majority who ride on the bus or drive personal vehicles stuck in Uber-congested traffic, ride-hailing’s legacy has been decidedly negative.

With Prop 22, the companies have now legislated into existence another miserly version of a portable safety net, along with a face-saving attempt at a minimum wage. For example, the value of Proposition 22’s offered health benefit has been estimated at about $1.20 an hour—well below the $4 to $6 value of benefits mandated for employees under state and federal laws. And many drivers would not be able to afford their share of the offered health care premiums, which would range from 20 to 60 percent.

Proposition 22 also appears to offer to drivers a new hourly minimum wage of at least $16.80 per hour. But if you read the fine print, a complex formula will be used in which only “engaged hours” (when the driver has a passenger in the car) will be counted as hours worked when calculating the minimum wage. All the downtime waiting for the next fare, or disinfecting cars between rides, or driving back from a remote drop-off location, will not be counted as hours worked.

A driver might put in 10 hours in a shift but only have a passenger for five of those hours. If the driver earns $100 in that shift, that would amount to only $10 per hour—less than California’s legal minimum wage of $12 per hour. Yet the Prop 22 formula will calculate that wage as $20 per hour.

A study by the University of California-Berkeley’s Labor Center found that, under Prop 22, many drivers could earn as little as $5.64 an hour, not even half of California’s minimum wage.

None of Prop 22’s offerings come close to what drivers would receive if voters had rejected the initiative and drivers had remained regular employees instead of independent contractors (and the companies had complied with AB5). Even worse, Proposition 22, if it survives likely court challenges, will lock in these serf-like conditions, since it will require an unprecedented seven-eights vote by the state legislature to change it.

Uber and Lyft are their own worst enemies. They entered the taxi business 10 years ago, breaking every law in the books, motivated by the Silicon Valley philosophy of “move fast and break things.” Well they broke it, and now they can’t figure out how to fix it. The CEOs talk a good game, saying they are “ready to do their part.” But they are hamstrung by their own unprofitable business model, which has also turned out to be bad for many of their drivers, for traffic congestion, for the environment, and for transportation. How much longer can society afford to allow this business model to continues?