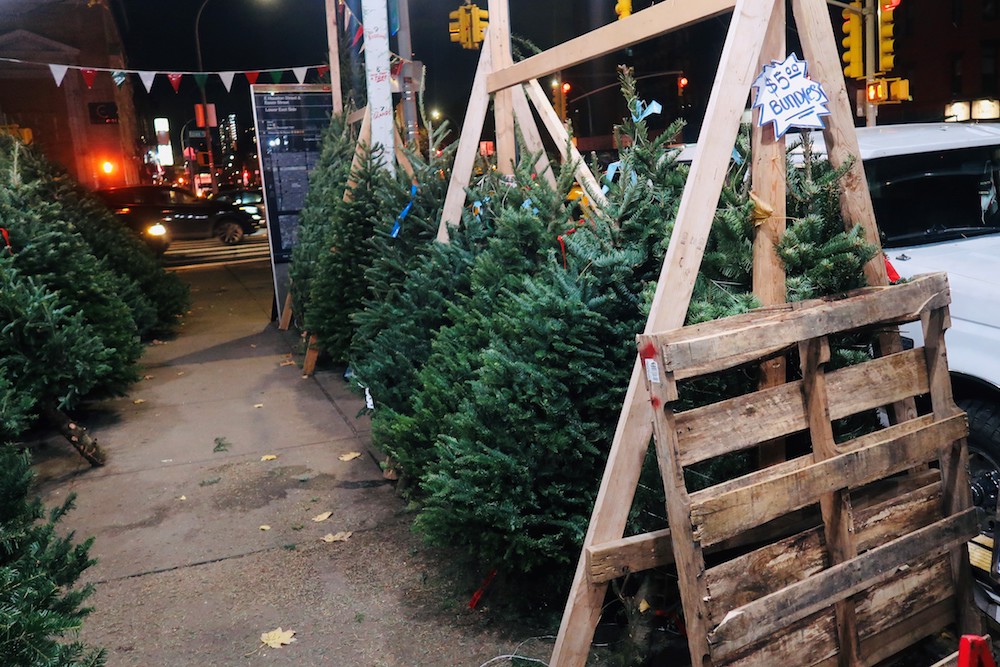 It’s hard to imagine New York without Christmas, but what will Christmas look like in a city gripped by the COVID-19 pandemic? Gotham’s Christmas streetscapes are legendary: the towering 75-foot Christmas tree at Rockefeller Center, ice skating in Central Park, dazzling window displays along Fifth Avenue, the Winter Village in Bryant Park. But this year, COVID is keeping people trapped in their apartments, travel restrictions are shrinking tourism, and much of the large-scale magic of New York between Thanksgiving and New Year’s is missing. Santa won’t be holding court at Macy’s, for the first time in 160 years. The lighting of the Rockefeller Center tree was closed to the public. For local residents, the smaller holiday celebrations the city endeavors to create may seem like just a Christmas of sorts—less familiar, less magical, less inspiring.

There’s one beloved tradition New Yorkers craving that familiar yuletide feeling will be especially loath to give up: Christmas trees, which are selling big this season, and the accompanying seasonal migration of Christmas tree vendors into town. Every year, an army of friendly, woodsy-looking salespeople, many from Quebec, set up shop on city sidewalks and sell live Christmas trees that make their way into apartments all over the city, tied to taxi cab roofs and lugged up narrow flights of stairs to upper floors.

Street vendors are a ubiquitous part of the urban landscape of New York City at all times of the year, of course. In every borough, in every corner of the city, they hawk everything from fruit and empanadas to clothing and second-hand goods. But New Yorkers have a particular fondness for the Christmas tree sellers who camp on busy corners each winter, with their fresh-smalling balsams and firs, propped up against sheds they’ve decorated with alluring displays of lights, wreaths, reindeer, found objects, and furniture: homey backdrops meant to seem like a miniature French Canadian Christmas village.

For one month every winter, these Christmas tree sellers become the glue that cements neighborhoods together. On the streets at most hours of the day and night, they’re the first to say hello and the last to say good night; their presence creates a small-town ambiance in a city of 8.4 million people. They become integrated into the community, and the community welcomes them. In a time when disease is trapping New Yorkers in their apartments and upending life-affirming routines, sidewalk Christmas tree stands and their vendors remain a crucial force for resilience in the city, keeping spirits high and connections intact.

Nationwide, the Christmas tree business is a very lucrative industry. Americans spent $2.56 billion on Christmas trees in 2018, and 25 to 30 million families buy live trees every year. A tree purchased on the street in New York may cost anywhere from $35 to $200, depending on its size, its type, and the neighborhood where it is sold. The most expensive trees are Fraser firs, prized for their two-toned needles (dark green on top and silver underneath) and their ability to hold up to indoor heat. Balsams, Douglas firs, and spruce trees are cheaper. 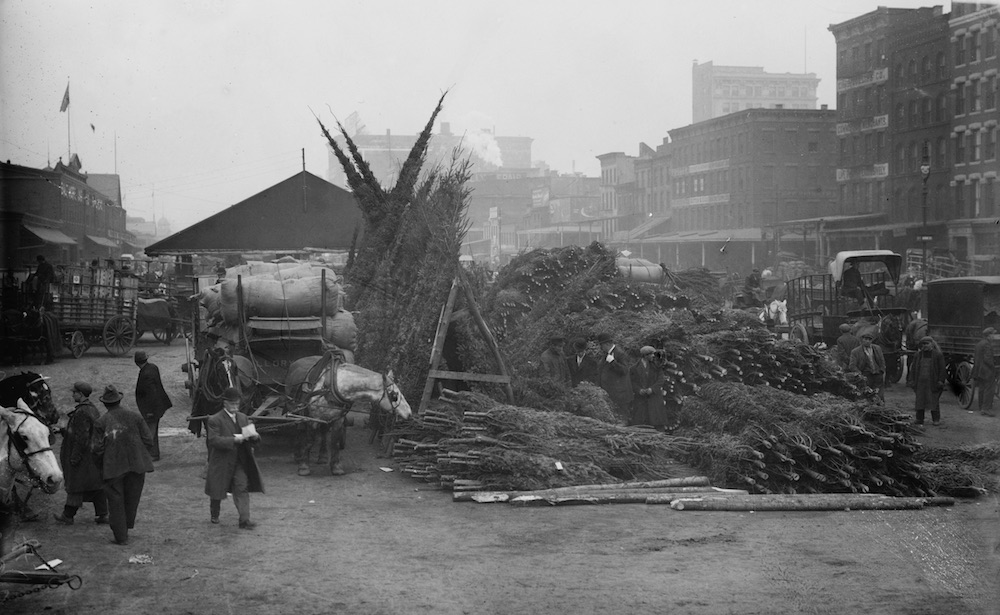 A Christmas tree market on West Street, near Pier 21 in Manhattan, around 1910. Courtesy of the Bain Collection, Library of Congress.

Tree vendors descended on New York as early as 1851, when a tree sold for $1. Today, these salespeople enjoy special status; a 1938 law, passed by the New York City Council, decreed that “storekeepers and peddlers may sell and display coniferous trees during the month of December.” The so-called “Coniferous Tree Exception” was enacted following citizen protests against then-Mayor Fiorello LaGuardia’s “war on Christmas trees,” during which the reform-minded mayor banned selling trees on city streets without a permit in an effort to clear the way for automotive traffic.

Since then, Christmas trees vendors have expanded throughout the five boroughs of New York, from Brooklyn and Queens to the Bronx, with the densest concentration of stands in Manhattan. Trucks from Quebec, Nova Scotia, Vermont, and North Carolina, working for large companies, deliver tens of thousands of trees to vendors around the city every night from Thanksgiving until December 25; the vendors then remain onsite around the clock to sell the trees and protect them from theft.

Since permits are not required, it is a largely unregulated business. Sales and salaries are delivered in cash, under cover of darkness, and business secrets are closely guarded. Some sellers rent sidewalk space in front of any store that will offer it to them. Others participate in auctions operated by New York City Parks and Recreation, which offers five-year contracts for spaces in city parks that can cost $1,000 a year in less desirable locations to $50,000 or more in SoHo Square on Sixth Avenue. A good spot for selling trees on the street is highly coveted and expensive, and competition is intense. Larger Christmas tree companies, including Florida-based Forever Evergreen, which operates the majority of the tree stands in New York, have been known to get into bidding wars, fueling an increase in tree prices. The competition for spaces and customers creates conflicts between vendors. Stories about spying, fights, and burning down tree stands are rampant.

On the streets at most hours of the day and night, they’re the first to say hello and the last to say good night; their presence creates a small-town ambiance in a city of 8.4 million people.

Individual vendors are the heart of the Christmas tree business in New York City. Many come from Quebec, whether their trees do or not, recruited by the tree companies because they are winter-hardy folks who are acclimated to frigid temperatures and are willing to camp out for a month, sleeping in their vans or their sales huts. The vendors form a small community, spread across Manhattan and into Brooklyn.

Selling trees is a profitable job that nets between $7,000 and $30,000 in a single month. It offers adventure and the enticements of a month in the Big Apple. But the working conditions are harsh, by any standard. Many stands are open 24 hours a day—and even if they aren’t, the trees must be protected from theft, more or less anchoring sellers to the stand day and night. If a seller has somewhere else to spend the night, they might load their unsold inventory onto a truck for the night, but they still must wait at the stand for the nightly shipment of trees, and take care of after-hours deliveries to nearby apartment dwellers. Mental stress compounds the hard physical work. Vendors carry large amounts of cash over the border when they return home, and fear detection when they pass through Canadian customs on their way back to Quebec. (For this reason, they shun media attention in New York.)

Selling Christmas trees requires marketing moxie. Vendors ensure that their stock of trees, carefully trimmed for symmetry, suits the surrounding neighborhood—smaller, less expensive trees are better suited to a block of modest walk-up apartment buildings, while towering evergreens might sell well in an area with large luxury apartment buildings or businesses. They become ace salespeople, sometimes even playing on stereotypes, with the vendors themselves becoming part of the display. One West Village vendor dresses her American boyfriend in a faux-Quebecois lumberjack getup; in another part of the Village, a French Canadian vendor with perfect English purposely thickens his accent to add to his paysan image. 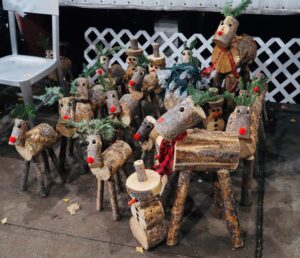 Tree sellers have perfected marketing their wares, setting up homey little French Canadian outposts throughout the city. These reindeer decorate a stand in Manhattan. Photo by Kevin Cabrera, November 28, 2020.

One stereotype of Quebecers turns out to be true: They are extraordinarily good natured and friendly, which goes a long way toward generating sales and drawing the same customers back year after year. It also cements the vendors as a critical element of urban street life, heightening the actual and perceived safety of the streets and residents’ sense of community. As journalist and activist Jane Jacobs observed, “A well-used city street is apt to be a safe street. A deserted street is apt to be unsafe. There must be eyes upon the street, eyes belonging to those we might call the natural proprietors of the street.”

Tree sellers are rewarded for their friendliness by local residents who look out for them, bringing them coffee, sandwiches, soup, and companionship, especially in inclement weather. Stores allow them to vendors to use the restroom. A resident may watch over a stand while the seller steps away. Sellers and homeless people—both essentially living on the street—establish mutually beneficial relationships involving exchanges of food and protection. These relationships are deeper than the ones forged between vendors and residents in other seasons. Warm conversations, perhaps briefer now during the pandemic, take place whether a passerby buys a tree or not, making tree sellers’ long shifts in the cold pass more quickly and relieving residents’ long months of isolation for a few moments.

This holiday season—the COVID Christmas—has been a strange one for New York and its Christmas tree vendors. Many vendors faced troubles getting to New York at all, with the U.S.-Canadian border closed to nonessential travel because of the pandemic. The ban does not include Christmas trees, but it does impact the people who sell them, and vendors from Quebec cannot cross the border legally. This year, fear of being detected by customs authorities is even more intense than usual.

New York City has borne more than its fair share of trauma in the last 20 years. But traumas like the September 11, 2001, attack on the World Trade Center and the COVID-19 pandemic in 2020 have revealed both the city’s toughness and its sociable, almost small-town side—exemplified in the Christmas tree subculture that is as much a part of holidays in New York as adorned shop windows on Fifth Avenue. Like Christmas, the vendors come every year. And in this pandemic year, particularly, they remain essential hubs of safe community contact, counteracting forced isolation. Since the end of the first COVID-19 wave, New York has been reinventing itself in creative ways—for instance, in the way it has created beautiful outdoor dining settings. The annual ritual of welcoming tree vendors, buying a tree, and carting it home in the cold should buck up New Yorkers as they celebrate the symbols—and substance—of their survivorship and goodwill.