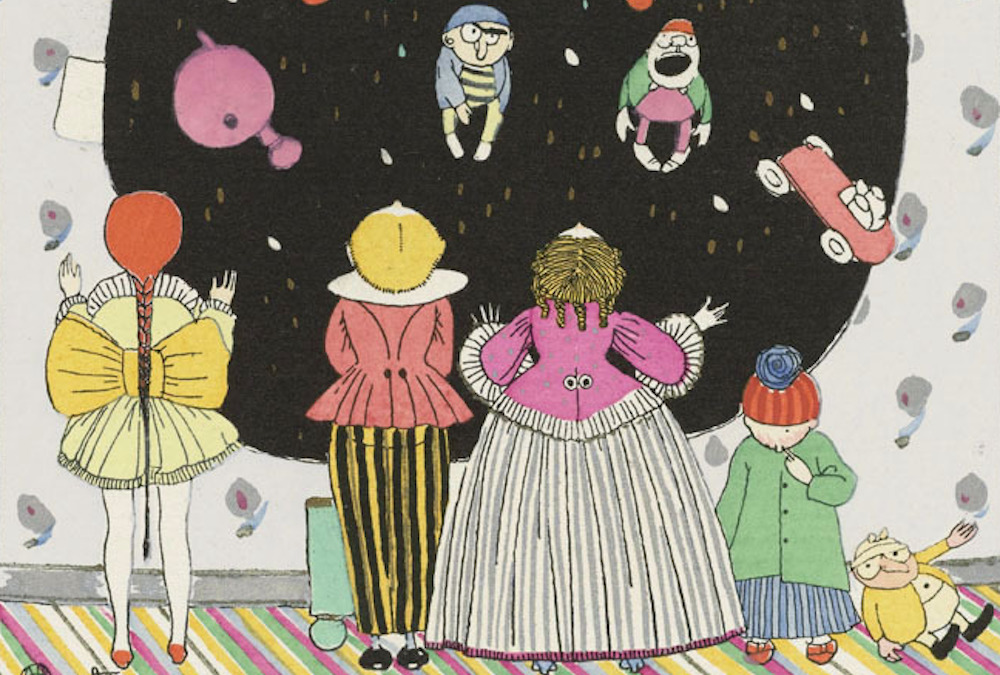 There is an almost magical connection between children and Christmas—but it hasn't always been that way. Courtesy of Public Domain.

There’s a special, even magical connection between children and the “most wonderful time of the year.” Their excitement, their belief, the joy they bring others have all become wrapped up in the Christmas spirit. Take the lyrics of classic songs like “It’s Beginning to Look a Lot Like Christmas,” “White Christmas,” or even the aptly titled “Christmas Is for Children” by country music legend Glen Campbell—these are just a few of the many pop culture offerings that cement the relationship between kids and Christmas. But it hasn’t always been this way, even though the holiday celebrates the Christ child’s birth. How kids got to the heart of Christmas has a lot to tell us about the hopes and needs of the modern grown-ups who put them there.

Until the late 18th century, Christmas was a boisterous affair, with roots in the pre-Christian Midwinter and Roman Saturnalia holidays. You’d find more along the lines of drunkenness, debauchery, and raucous carousing at this time of year, especially from young men and the underclasses, than “silent night, holy night.” For example, in early forms of wassailing (the forerunner of neighborhood carol-singing) the poor could go into the homes of the rich, demanding the best to drink and eat in exchange for their goodwill. (Once you know this, you’ll never hear “Now bring us some figgy pudding” the same way again!)

But the boozy rowdiness of the season, together with its pagan roots, was so threatening to religious and political authorities that Christmas was discouraged and even banned in the 17th and 18th centuries. (These bans included the parliamentarians in mid-17th century England, and the Puritans in America’s New England in the 1620s—the “pilgrims” of Thanksgiving fame.) But then, as now, many ordinary people loved the holiday, making Christmas difficult to stamp out. So how did it transform from a period of misrule and mischief into the domestic, socially manageable, and economically profitable season that we know today? This is where the children come in.

Until the late 18th century, the Western world saw children as bearers of natural sinfulness that needed to be disciplined toward goodness. But as Romantic ideals about childhood innocence took hold, children (specifically, white children) became seen as the precious, innocent keepers of enchantment that we recognize today, understood as deserving protection and living through a distinct phase of life.

This is also the time when Christmas began to transform in ways that churches and governments found more acceptable, into a family-centered holiday. We can see this in the peaceful, child-focused carols that emerged in the 19th century, like “Silent Night,” “What Child Is This?,” and “Away in a Manger.” But all the previous energy and excess of the season didn’t just disappear. Instead, where once it brought together rich and poor, dominant and dependent according to old feudal organizations of power, new traditions shifted the focus of yuletide generosity from the local underclasses to one’s own children.

I’ve always found the way we abandon kids to deal with the discovery that “Santa isn’t real” on their own—or even expect them to hide it, for fear of disappointing adults that want to get one more hit of secondhand enchantment—unethical and counter to the spirit of the season.

Meanwhile, the newly accepted “magic” of childhood meant that a child-centered Christmas could echo the old holiday’s topsy-turvy logic while also serving the new industrializing economy. By making one’s own children the focus of the holiday, the seasonal reversal becomes less nakedly about social power (with the poor making demands on the rich) and more about allowing adults to take a childlike break from the rationalism, cynicism, and workaday economy of the rest of the year.

Social anthropologist Adam Kuper describes how the modern Christmas “constructs an alternate reality,” beginning with rearranged social relations at work in the run-up to the holiday (think office parties, secret Santas, toy drives, and more) and culminating in a complete shift to the celebrating home, made sacred with decked halls, indulgent treats, and loved ones gathered together. During this season, adults can psychologically share in the enchanted spaces we now associate with childhood, and carry the fruits of that experience back to the grind of everyday life when it starts up again after the New Year.

This temporary opportunity for adults to immerse themselves in the un-modern pleasures of enchantment, nostalgia for the past, and unproductive enjoyment is why it’s so important that kids fully participate in the magic of Christmas. The Western understanding of childhood today expects young people to hold open spaces of magical potential for adults through their literature, media, and beliefs. This shared assumption is evident in the explosion of children’s fantasy set in medieval-looking worlds over the past century, which was the focus of my recent book, Re-Enchanted (where I discuss Narnia, Middle-earth, Harry Potter, and more). Christmas or Yule appear in many of these modern fairy stories, and sometimes even play a central role—think Father Christmas gifting the Pevensie children weapons in The Lion, the Witch, and the Wardrobe—using the holiday as a bridge between the magical otherworlds of fiction and our real-world season of possibility. 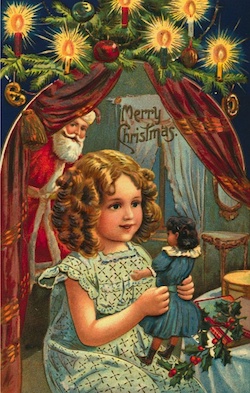 In the early 19th century, buying presents for children became a central part of Christmas celebrations. Courtesy of Public Domain.

Beyond storytelling, we also literally encourage kids to believe in magic at Christmas. One of the most iconic expressions of this is an 1897 editorial in the New York Sun titled “Is There a Santa Claus?” In it, editor Francis Pharcellus Church replies to a letter from 8-year-old Virgina O’Hanlon with the now-famous phrase “Yes, Virginia, there is a Santa Claus,” and describes her friends’ disbelief as coming from the “skepticism of a skeptical age.” Church argues that Santa “exists as certainly as love and generosity and devotion exist,” minimizing the methods of scientific inquiry to claim that “[t]he most real things in the world are those that neither children nor men can see.”

Many of the arguments for the importance of the arts and humanities that we still hear today can be found in Church’s language, which identifies sources of emotional experience like “faith, fancy, poetry, love, romance”—and belief in Santa Claus—as crucial to a humane and fully lived life. According to this mindset, Santa not only exists, but belongs to the only “real and abiding” thing in “all this world.” “Yes, Virginia, there is a Santa Claus,” as it has come to be known, has been reprinted and adapted across media forms since its publication, including as part of holiday TV specials and as the inspiration for Macy’s department store’s “Believe” charity and advertising campaign since 2008.

The fact that the sentiments in this editorial have come to be associated with a major retailer may seem ironic. Yet, calls to reject consumerism at Christmas have been around ever since it became a commercial extravaganza in the early 19th century, which is also when buying presents for kids became a key part of the holiday. How to explain this? Today, just as in premodern Christmases, overturning norms during this special time helps to strengthen those same norms for the rest of the year. The Santa myth not only gives kids a reason to profess the reassuring belief that magic is still out there in our disenchanted-looking world, it also transforms holiday purchases from expensive obligations into timeless symbols of love and enchantment. As historian Stephen Nissenbaum puts it, from the beginning of Santa Claus’s popularization, he “represented an old-fashioned Christmas, a ritual so old that it was, in essence, beyond history, and thus outside the commercial marketplace.” Kids’ joyful wonder at finding presents from Santa on Christmas morning does more than give adults a taste of magic, it also makes our lavish holiday spending feel worthwhile, connecting us to a deep, timeless past—all while fueling the yearly injection of funds into the modern economy.

Does knowing all this ruin the magic of Christmas? Cultural analysis doesn’t have to be a Scrooge-like activity. To the contrary, it gives us the tools to create a holiday more in line with our beliefs. I’ve always found the way we abandon kids to deal with the discovery that “Santa isn’t real” on their own—or even expect them to hide it, for fear of disappointing adults that want to get one more hit of secondhand enchantment—unethical and counter to the spirit of the season. The song “I Saw Mommy Kissing Santa Claus” is supposed to be funny, but it captures shades of the real anxiety many kids go through every year. Knowing what children and their belief do for society during the holidays can help us choose a better approach.

A couple of years ago I saw a suggestion floating around on the internet that I think offers an ideal solution for those who celebrate Christmas. When a child starts questioning the Santa myth and seems old enough to understand, take them aside and, with utmost seriousness, induct them into the big grown-up secret: Now THEY are Santa. Tell the child that they have the power to make wishes come true, to fill the world with magic for others, and as a result, for us all. Then help them pick a sibling or friend, or better yet, look outside the family circle to find a neighbor or person in need for whom they can secretly “be” Santa Claus, and let them discover the enchantment of bringing uncredited joy to someone else. As Francis Pharcellus Church wrote to Virginia O’Hanlon more than 100 years ago, the unseeable values of “love and generosity and devotion” are in some ways the “most real things in the world,” and that seems like something that all kids—”from one to 92“—can believe in.