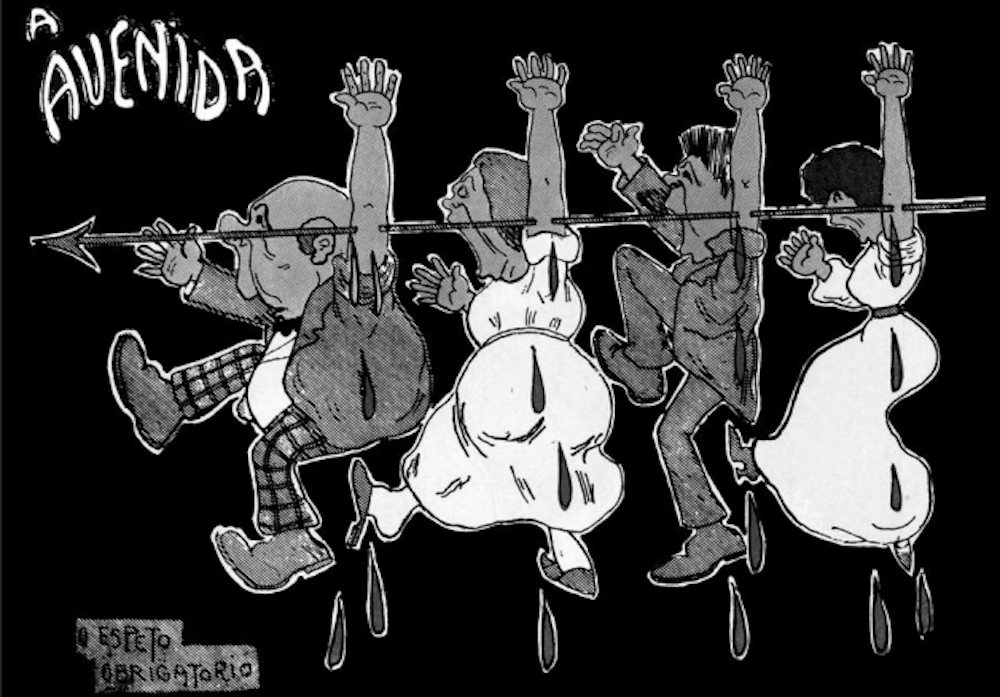 A 1904 political cartoon on the enforcement of mandatory vaccinations. Courtesy of Public Domain.

The circumstances that led to this unprecedented revolt—a swirl of anti-science arguments, denialism about the benefits of vaccination, and fake news about the effectiveness of the vaccine—are not too distant from what’s happening in Brazil today. As with smallpox in the early 20th century, COVID-19 is now being used politically by fringe groups seeking to destabilize power. The difference this time is that the national government itself is helping to incite the revolt against vaccines and science.

When the Vaccine Revolt began, just 15 years had passed since the proclamation of the republic in 1889. In 1904, democracy remained fragile and excluded much of the population.

Rio de Janeiro itself was also in the midst of an acute process of industrialization, and its public services had not kept pace with the demands of its growing population. That failure had facilitated the proliferation of diseases, including smallpox.

Facing this scenario, Rodrigues Alves, who had assumed the presidency in 1902, adopted radical policies to develop the city and remedy its main deficits. These policies included a broad urban reform that led to the expropriation of several properties inhabited by the lower classes, the prohibition of social and labor activities that he considered incompatible with life in the capital—and the imposition of vaccination, which was the trigger for the revolt of the population.

Vaccination against smallpox wasn’t new. Since at least 1837, there had been an obligation to vaccinate children against the disease (and from 1846 the rule was also valid for adults). But this mandate was not fulfilled in practice, partly because the State could not produce enough vaccine.

But after young sanitary doctor Oswaldo Cruz took over as General Directorate of Public Health, he quickly ensured that Brazil had the capacity to produce enough vaccines to reach the majority of the population. Cruz then convinced the government to reinstate the obligatory vaccination in a way that would be virtually impossible for anyone to escape: only the vaccinated could enroll in schools, buy houses, get travel permits or even sign employment contracts.

In this, Cruz was drawing on expertise and experience. As a younger man, Cruz had studied at the renowned Pasteur Institute in Paris. On his return to Brazil, he had organized the fight against the plague in the city of Santos, São Paulo, and founded, in 1900, the Federal Serum Therapy Institute (now Oswaldo Cruz Institute), a pioneering center for the study of tropical diseases.

Despite Cruz’s credentials, he struggled to counter the uncertainty, doubt, and fear that surrounded the vaccine. Anti-science arguments were waged around the effectiveness of the vaccine and what it could do to a person. There’s an embryo of the modern fake news to the disinformation that was spread—one rumor had it that anyone taking the vaccine would end up looking like a cow.

There’s an embryo of the modern fake news to the disinformation that was spread—one rumor had it that anyone taking the vaccine would end up looking like a cow.

But it wasn’t just concern around the shot that led to the uprising. Many saw the edict to get vaccinated as an invasion of their individual rights. The moral conservatism of the times also led people to balk at the idea of women being touched without the supervision of fathers or husbands by those administering the vaccination. In addition, large sections of the population, mostly poor, who were not treated as fully empowered citizens, resented being forced to submit to a vaccine they did not understand. Critics of the republic—monarchists, disgruntled factions in the army, and radical opponents of oligarchs linked to powerful coffee plantations—maneuvered to exploit discontent and incite rebellion.

Once A Notícia published the government’s vaccination plan, thousands of people joined marches in the center of the city. The assembled coalition included everyone from workers to the pro-coup military, who were seeking to take the front and bring the dissatisfied to their side in the following days. By November 13, the conflict had become widespread and violent, with attacks against the police forces. The armed forces were called in to contain the disturbances, and the revolt began to be crushed by force. 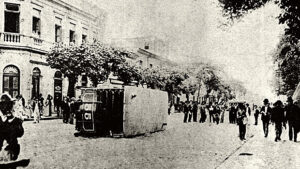 A Rio streetcar overturned during the revolt. Courtesy of Public Domain

Ten days later, all the hotspots of resistance had been defeated. In less than two weeks of the Vaccine Revolt at least 30 people died (some sources say 31) and around 100 were wounded. Of the protestors, almost 1,000 were arrested and nearly 500 were deported to the state of Acre, then a federal territory without self-government. (It would be nicknamed the Brazilian Siberia because of the government custom of sending criminals and rebels there.)

Officially, vaccination continued to be mandatory in the aftermath, but the government preferred not to enforce the rule to avoid more public revolt. It would take a new epidemic, a smallpox plague in 1908 that produced social unrest and violence, to convince the population of the benefits of immunization.

More than a century later, another epidemic has reached Brazil, and the winds of revolt are beginning to blow. What is different this time is that the authorities are not thinking about making vaccination compulsory. On the contrary, the far-right government of Jair Bolsonaro is itself inciting a dangerous vaccines denialism while his opponents stage protests demanding a vaccination plan.

Bolsonaro opposes the obligation of vaccination while calling on his supporters to doubt science, not to wear masks and not to maintain any social distance. Since the pandemic’s beginning, the Brazilian president has made disastrous statements, suggesting several times that COVID would only be ‘a little flu.”

If in 1904, the rumor was that the vaccinated would end up looking like cows, today Bolsonaro has declared, without irony, that whoever takes the vaccine against COVID-19 could end up turning into a crocodile.

These lies and misinformation come with their own political objectives—that of pleasing an important portion of the far-right that openly denies scientific advances and clings to conspiracies like QAnon. This approach also lays the ground for a self-coup if Bolsonaro’s government is threatened or fails to win the elections scheduled for 2022. Like in 1904, most of the army today is on the government’s side.

Still, despite the denialism, more than a century of vaccination in Brazil has convinced most people about the need for vaccines and preventions. After initial skepticism, the percentage of Brazilians willing to be vaccinated for COVID-19 has risen, hitting 75 percent in January polling (with only 16 percent saying they would not get the needed shot).

The lack of vaccine doses is the larger problem. Bolsonaro has made it so difficult for Brazilians to access the vaccines that have been produced all around the world that it’s not clear how to vaccinate a population of 213 million.

Brazil’s long history of vaccination shows how societies can evolve, but the current administration is trying to reverse these changes. In an apparent policy involution, 2020 repeats 1904 (and 2021 doesn’t seem to be different), only the actors have switched places.

The anti-science arguments, the denialism about the benefits of vaccination, and the fake news about the effectiveness of the vaccine are all extremely similar to what happened more than 100 years ago, and show the effects of ignorance: unrest due to fear and helplessness, and needless deaths, like those that followed in the 1908 outbreak of smallpox.