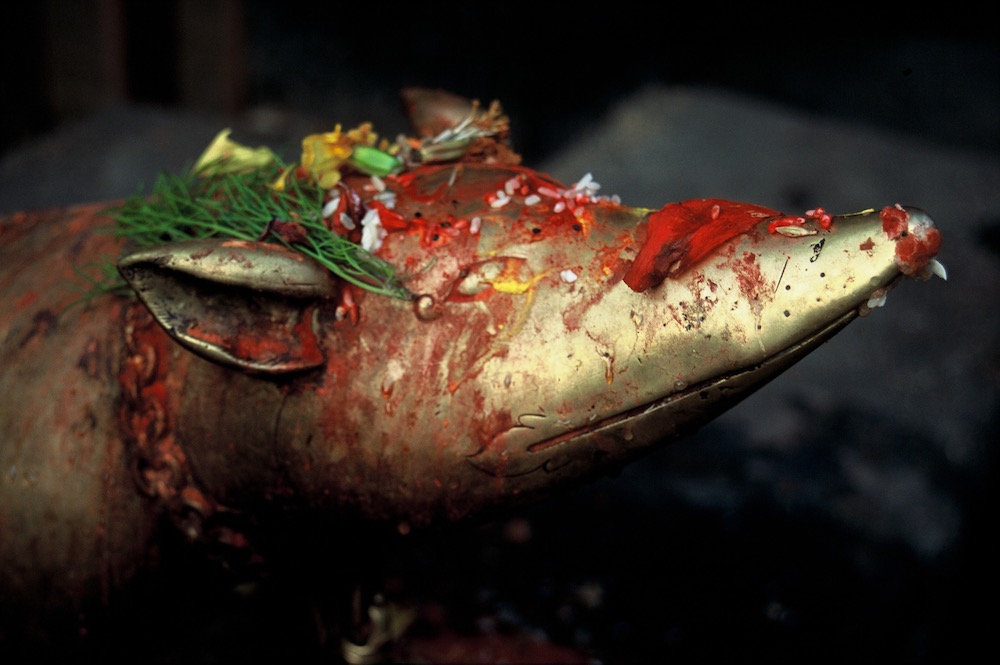 Mushakraj, the mount of Ganesh, in Durbar Square, Kathmandu. Courtesy of Ed Douglas.

The city seemed like a mushroom, a cement mycelium inserting itself into new corners of the valley, fragmenting blocks of countryside and then flooding in like a gray tide to drown the green. Each time the aircraft cleared the last hill on the valley’s rim and sank toward the Tribhuvan International in Nepal, I looked around at new neighborhoods that on my last departure—sometimes only a matter of months ago—had still been fields, the most fertile in South Asia as one local told me.

For more than a quarter of a century I visited Kathmandu at least once a year, as a journalist and a tourist, hanging on to the magic I’d found there on my first visits. The rapid changes were disorienting and a little dispiriting. The city’s charm was clearly fading, like the bloom on a flower, wilting under the onslaught of construction and pollution. During the civil war, which began in 1996, the city filled with refugees. After it ended 10 years later, the brakes on Nepal’s economy came off, and development surged.

Each time I arrived, I would seek out familiar places to reconnect to the city’s particular energy, as though the voltage had changed and once again, I’d brought the wrong adaptor.

I loved, for instance, the museum in Patan, which offers quiet halls of gilded treasures in a building of exquisite appeal, where the city’s dusty confusion was distilled into clear refreshment. Or the vast and ancient Buddhist stupa at Boudha, a meeting place for Tibetan Buddhists for more than a thousand years. Little more than 50 years ago, this waymark on the trade route to Tibet was set, like a round white jewel, in emerald fields.

Then the concrete swept around it and the surrounding roads became choked with smog. Yet the huge dome still cast its spell, especially at dusk, when the city’s Tibetan communities gathered in the fading light to amble round its circumference: shaven monks, toothless old ladies in their aprons, young women fresh from the office, all whispering mantras, spinning prayers wheels, sharing gossip. It was calming to join this endless procession, breathe in the scent of juniper and lose myself a little.

Both options usually had to wait a bit. More often than not I ended up in the tourist district of Thamel, too far from Patan and Boudha for spur-of-the-moment visits. Thamel was—is—noise and hassle, but I usually had people to see and meetings to arrange and these things were most easily accomplished in its overcrowded streets. Think of any service a traveler might require, and you’d find it within a block of your hotel. For a period, I most commonly stayed at the Kathmandu Guest House, failing, like the proverbial frog in the warming pan of water, to notice when the prices got too hot to handle. When I finally realized I didn’t have to stay there to visit the hotel’s barber, my old friend Dinesh, I moved elsewhere.

Another advantage of Thamel was its proximity to a more accessible touchstone for me to reconnect. This one was more down at heel.

You’re never far from a real rat in Kathmandu. The real ones are pests but they’re survivors, too, scrapping for life where they can, and so earn grudging respect from the locals. Life isn’t easy with an elephant on your back.

Twenty minutes walking south from Thamel through scruffy lanes, is the center of the old city, popularly known as Durbar Square, where the pagoda temple known as Kasthamandap stands. Kasthamandap is where the name Kathmandu originates—Kastha being wood and mandapa, or madu, meaning pavilion. The oldest surviving temple in the Newari style, it is the hallmark of Kathmandu and its satellite cities. It’s said to be built from timber sawn from a single tree and covers a stone platform roughly 70 feet along each side.

Compared with much Newari architecture, Kasthamandap is rather plain and lacking in ornamentation, but also it is unquestionably the central focus of the city. The oldest recorded reference to the temple is from the 12th century, but it’s likely much older than that. Like Boudha, the structure stands alongside an ancient trade artery on the cusp of the northern and southern parts of the city, a liminal place, at the start and end of things.

With that in mind, it’s not surprising that right next door to Kasthamandap is another temple, the Ashok Vinayak. It’s dedicated to the elephant-headed god Ganesh. (“Vinayak” is another of his names.) Ganesh is the remover of obstacles, so if you’re planning a journey or a new enterprise, or you just want your day to go smoothly, then he’s your god. This Ganesh shrine is one of the oldest and most popular in the whole Kathmandu valley, even if the stone icon itself is of little artistic merit. The shrine is so popular, in fact, that this neighborhood is known as Ganeshthan: the “place of Ganesh.” 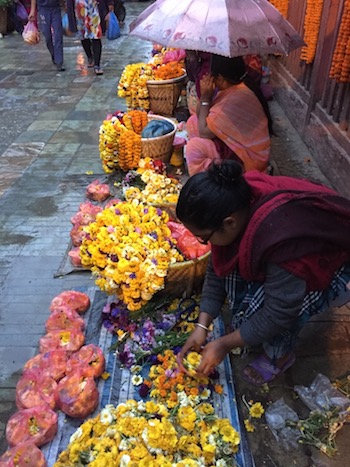 Women selling flowers in the streets near Kasthamandap. Courtesy of Ed Douglas.

At first light, women bring plates with vermilion, rice and petals to anoint the shrine and ring the temple bell. At rush hour, commuters on their Hero Honda motorbikes pause as they pass. Helmet visors snap up and a gloved right hand comes to the eyes in reverence as they glide on through a cloud of incense smoke, past women sitting on the ground selling vegetables and flowers.

But it wasn’t Ganesh I would come to see. My ritual icon is just across the road—a gilt-metal rodent bolted to a plinth to deter robbers, its grubby backside nestling against the side of Kasthamandap. There’s a chain around its neck with a bell and its pointy snout is tilted upward, polished to a bright sheen by the supplicatory fingers of passers-by. There are often flowers placed between its ears and a tikka smeared on its forehead. Depending on that day’s flower arrangement, the rodent can seem austere or jaunty, punkish or aloof, always full of character, a down-to-earth, quotidian sort of god: demotic, even democratic. Its commonest name is Mushakraj, or more formally, Mūṣakavāhana, a vahana being a god’s vehicle or means of transport: his or her entourage.

Ganesh emerged clearly in Hindu culture around the 4th century and early scriptures mention a few vahana: a peacock, a lion, a serpent, even another elephant. But it’s the rodent that stuck. Rodents can go anywhere, squeeze into tiny spaces no elephant could navigate, thus carrying the quick-witted Ganesh into corners of your life he might not otherwise reach. It’s not just the external hurdles on the road we need to cross; it’s the impediments within ourselves that we need help from Ganesh to overcome, just as he harnessed his rodent friend and brought out the better angels of its nature.

In the spring of 2015, once more newly arrived in the city, I took my regular walk through the alleyways toward Durbar Square and Ganeshthan. The corpse of a rat lay in a gutter on its back, teeth pointing to the heavens. You’re never far from a real rat in Kathmandu. The real ones are pests but they’re survivors, too, scrapping for life where they can, and so earn grudging respect from the locals. Life isn’t easy with an elephant on your back. When I reached my rat, opposite the Ashok Vinayak, he was sporting a Mohican and looking sharper than ever. I took it as a good omen and next day flew on to the far west of Nepal on another mission. 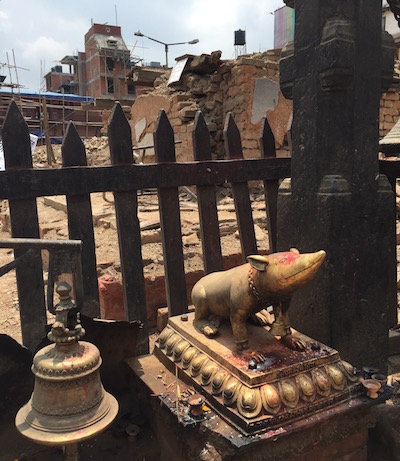 The statue of Mushakraj in Durbar Square after the devastating earthquake that rocked Kathmandu in 2015. Courtesy of Ed Douglas.

Of course, I was wrong. Days later a deadly earthquake rocked Kathmandu. Flying back into the city, I saw from the plane this time that buildings had fallen, not sprung up, and the airport was busy with military aircraft bringing emergency aid. When we landed, I hurried back to Durbar Square. Kasthamandap was gone, a jumble of broken timbers piled on its stone plinth. The nearby temple of Maju Dega, three stories and 60 feet high, was nothing but rubble.

Devastation was everywhere. But the flower and vegetable sellers were already back, nestling against the ruins of the temples. Stricken citizens were out in force, looking for help in clearing these latest obstructions.

So it was lucky that the little Ganesh shrine had survived. And, across the narrow street, for once bareheaded but standing firmly on his front paws, was the rat, nose in the air, sniffing the centuries. I rubbed his snout and then went to look for my friend Dinesh, to see if he was unscathed and would give me a haircut.