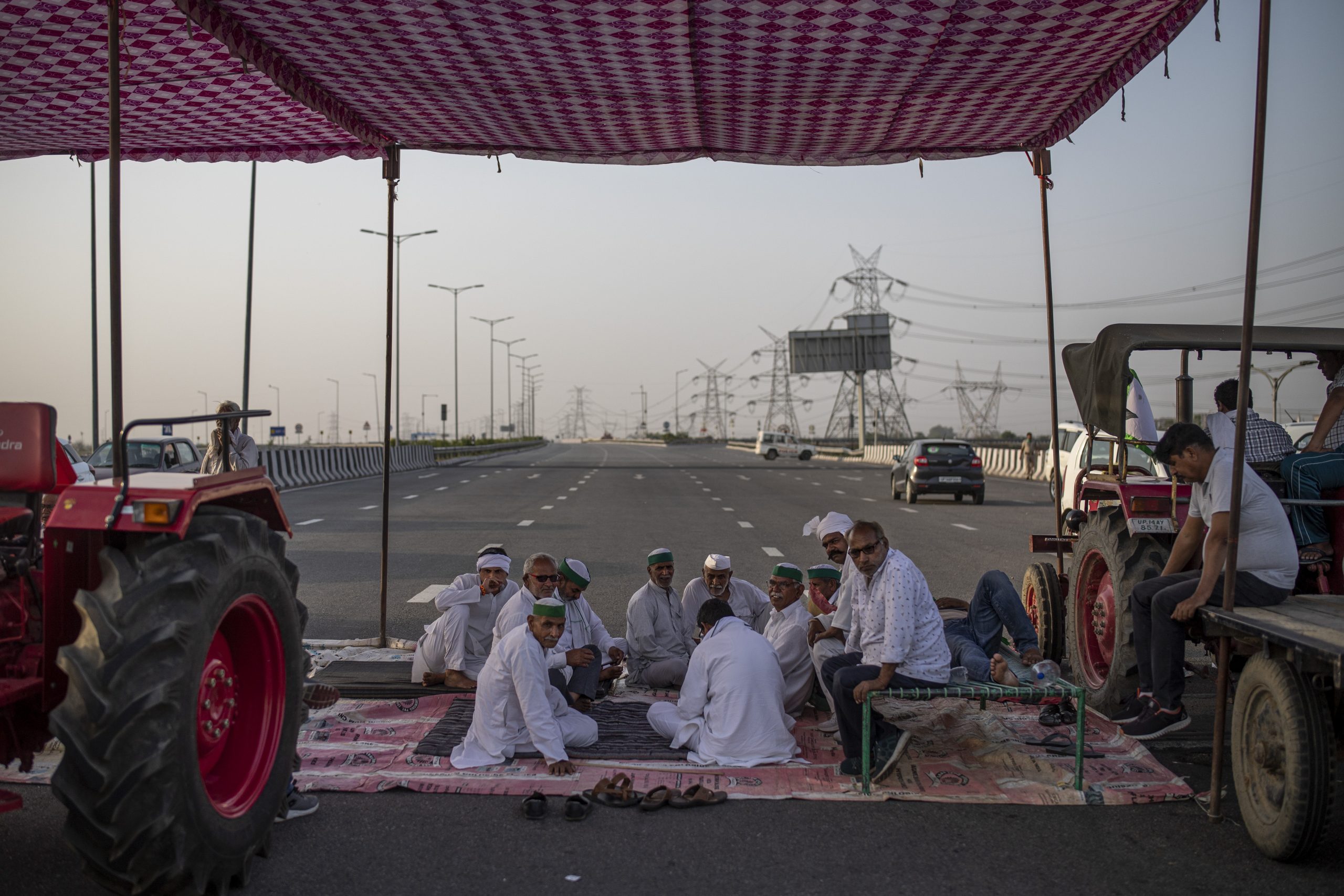 Farmers sit in a tent during a 24-hour blockade of a major expressway in Dasna, India, Saturday, April 10, 2021. (AP Photo/Altaf Qadri)

For more than four months now, about 200,000 men, women, and the elderly have been camping on the roads leading to Delhi, barricaded from the nation’s capital by concrete walls, trenches, concertina wires and nails on the road. The farmers are demanding the repeal of three laws that the right-wing nationalist Bharatiya Janata Party (BJP) enacted in violation of India’s Constitution and due parliamentary procedure last September. They also seek the legalization of a national Minimum Support Price index, an assured price fixed every year by the government, on farm produce across 23 crops.

India today has about 100 million farmers, more than 86 percent of whom own small, marginal properties of one or two hectares of land. This number of farmers, multiplied by the number of family members, plus those engaged in allied activities, means that the agrarian sector makes up over half of India’s population.

For the last half-century, subsequent governments have neglected the sector, resulting in a vastly misregulated system where farmers accrue huge debts and routinely commit suicide—an estimated 300,000 in the last two decades alone. Though the nation is supposedly enjoying a food surplus, the mismanagement of storage and distribution of grains has led to India to rank 94 out of 107 among the countries on the World Hunger Index. There is a need for better regulation. Instead, in the name of free markets, in June 2020, under the cover of the pandemic, as coronavirus cases were spiraling, the BJP issued three Ordinances which had a far-reaching impact in the nation’s agrarian sector.

They included the Farmers Produce Trade and Commerce (Promotion and Facilitation) Act, which will usher in a parallel system of procurement of farm produce where farmers will likely never get a fair price for their crop. The Farmers (Empowerment and Protection) Agreement of Price Assurance and Farm Services Act, which sets up a framework for contract farming through an agreement between a farmer and a corporate entity, and bars farmers from seeking any recourse in the courts in case of conflict—practically, this means the corporate entities will dictate terms without being challenged in any meaningful way. And the Essential Commodities Act, an amendment to an earlier law created in the 1950s when India faced a huge food crisis. It delists cereals and other items allowing private players to stockpile goods and cause artificial market inflation.

When the laws were passed in September, farmers from the state of Panjab, in the north west of the country, were the first to respond. Panjab, known as the granary of the nation, is one of the most agriculturally advanced states of India. In past decades, at the height of India’s Green Revolution, Panjab produced food grains for nearly 70 percent of the country; today it still produces for about 40 percent. For about two months, farmers there, under the leadership of unions, carried out blockades of trains and a boycott of highway toll booths, petrol pumps, and warehouses owned by the rich corporations that would benefit from the new laws.

Since the government did not pay attention to the farmers and their strike in one corner of the nation, the farmers from Panjab decided to march to Delhi on Constitution Day, November 26. Farmers from neighboring state Haryana and Uttar Pradesh joined in. The police sought to stop them with tear gas and water cannons, and by digging trenches and placing barricades. But the farmers broke through the barricades with their tractors, reached Delhi and camped on its outskirts. On the same day, another section of society—250 million industrial workers held a day-long strike demanding employment opportunities, against new anti-worker labor codes, and to stop privatization of public sector undertakings. Together, the workers’ and farmers’ actions became arguably the largest strike anywhere in the world.

The protests have continued to gain strength and have now moved beyond north India, spreading across 20 states.

The biggest provocation to date in the protests came on Republic Day, January 26, when the farmers organized a Tractor March in Delhi. Only days before, the 11th round of negotiations between the protestors and the government had broken down. When cornered by union leaders, government officials had first offered to amend the laws, and when farmers insisted on repeal, they offered to postpone the implementation of the laws by 18 to 24 months. The farmers rejected the stay, insisting, again, on repeal. So the atmosphere the day of the march was especially charged. Panjab also has a long history of confrontation with Delhi, specifically the Red Fort, which has been the seat of power, dating back to Mughal and British rule.

Events took a turn when some protesters reached the Red Fort and unfurled the Sikh flag, or the Nishan Sahib, along with other farmer union flags. Since farmers from Panjab are mostly from the Sikh religion, India’s news media—which has often sided with Prime Minister Narendra Modi during his seven-year rule—portrayed the act as an affront to the nation flag, which went untouched, and used the event to frame the protests as being organized by anti-national Khalistan supporters.

But the smear campaign isn’t working. Despite ongoing government propaganda—from the very beginning of the protests, the government launched a fierce counterattack to blunt, exhaust, coerce and divide the farmers, calling them Khalistani, rich farmers, foreign hand, urban naxals, anti-nationals, and so on—the protests have continued to gain strength and have now moved beyond north India, spreading across 20 states. In Bengal, Odisha, Bihar, Karnataka, Maharashtra and Gujarat, in large meetings, thousands of people are vowing to boycott the government until it repeals the Farm Laws and legalizes the minimum price guarantee (MSP). Specific calls to block roads or trains are being carried out throughout India. The farmers are now planning a foot march to the Parliament in May.

The Sikh tradition of langar—communal eating—has served as the heart of the protests. Men and women join in cooking meals for the whole community. The tradition of sewa—selfless service—is also a core tenet, and it extends to running full-fledged libraries in tents, some of which double as informal classrooms for children of the adjoining slums, and to keeping the camp sites neat and clean. Panjabiyat—the sense of belonging to Panjab—has a cultural appeal beyond religious differences, which may also explain the boost of Muslim solidarity to the movement.

To date, more than 375 people have lost their lives mostly through heart attacks, accidents and some suicides. While national English media and television continues to blank out the protests, local media in languages other than English continue to focus on them. International media, too, has been paying attention; in early February, the Barbadian pop star Rihanna put a viral spotlight on the protests when she tweeted: “Why aren’t we talking about this? #FarmersProtest.” The farmers themselves have started their own YouTube channels, their own Twitter cells, and independent media, as well. The protests have even led to a new genre of protest music—with singers producing about 500 songs in three months.

The farmers are prepared for a long fight. In the winter months they fashioned tents with tarpaulin on their trolleys, and now with harvest season upon them, trolleys are going back and huts with grass and straw roofs, equipped with desert coolers and refrigerators, are coming up for the scorching summer. There is plenty food supply though never enough mobile toilets. The villages around the protest sites provide fresh milk and vegetables. In the villages, rosters of men, women and elderly, are maintained so that people can take turns at the protest sites. Depending on how much land a farmer owns, each home supplies rations and fire wood for the protest kitchens.

Since the last round of negotiations in January stalled, the government has not talked to farmers. Repealing the laws would shatter its strong-arm image. There is the pressure from the crony corporate lobby that sponsored the government’s election campaigns, which now backs the laws because they stand to benefit. The larger dimension is the pressure from the World Trade Organization which since the Uruguay round of General Agreement on Tariffs and Trade, 1986-93, has been pushing to liberalize the agrarian sector.

In March, the Supreme Court of India’s committee assigned to look into the laws submitted its recommendations in a sealed envelope, but no details have come forward yet on the confidential process. As of now, the protests can have three likely outcomes: government agrees to repeal the laws; government uses armed action to evict the protesters; government continues to prolong the protests hoping they crack due to internal pressures, they turn violent giving the government an excuse to crack down on them, subside as they run out of steam, or the government manages to buy out union leaders.

Much also depends on the ongoing elections in five states. But as of now, the protests are growing strong and have become the longest stand-off since India achieved independence; to the protesting farmers, they view this as a second wave of the independence struggle.