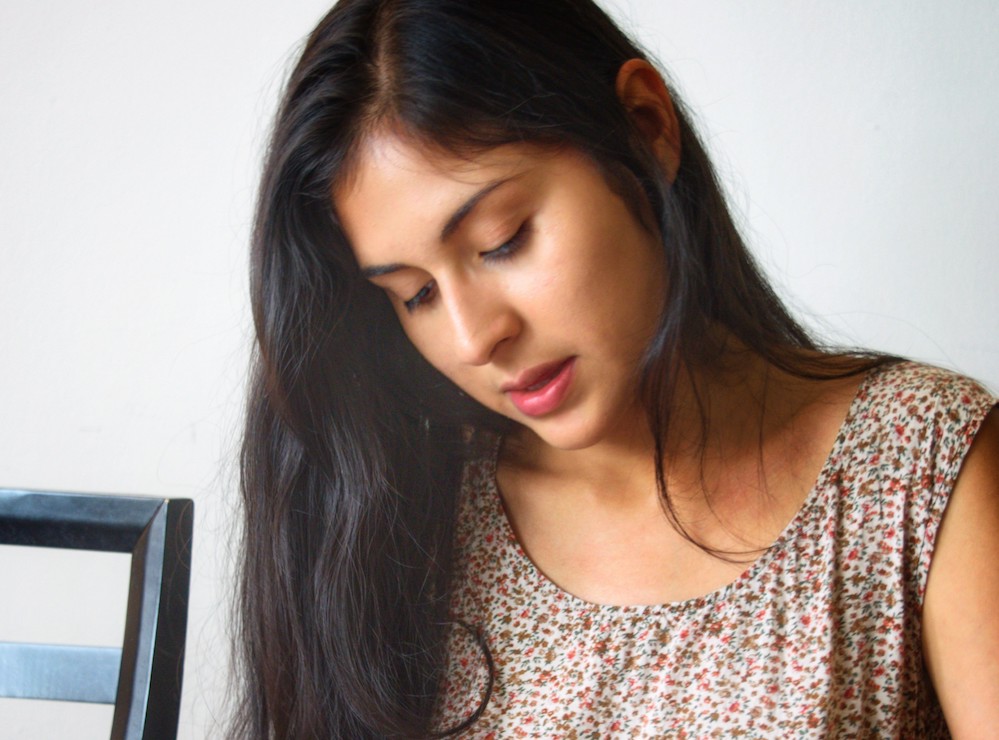 Each year for the past decade, the Zócalo Poetry Prize has been awarded to the U.S. poem that best evokes a connection to place.

The power of this concept to unite our distinct realities around universal themes feels especially important in this year of separation. Place can illuminate the commonalities that flow between a 9-year-old poet muddling through distance learning and a retiree turning to the form for the first time in the pandemic. The 2021 prize submissions—more than 900 poems from more than 450 poets—also included poems that were written by incarcerated people, and submitted by their family members.

Zócalo poetry editor, Connie Voisine, and our panel of judges—Arizona poet laureate Alberto Ríos, Los Angeles Deputy Mayor for International Affairs Nina L. Hachigian, and Zócalo trustee Reza Zaidi—had no easy task in choosing this year’s winner. But the submission that won them over stood out for the way the poem weaves together strands that resonate deeply in the public consciousness—familial bonds, oppression and resilience, and exploration of cultural identity—and anchors them within a loving and meticulous study of its title subject.

We are thrilled to announce that the 10th Annual Zócalo Poetry Prize, complete with $1,000, goes to Angelica Esquivel for her poem “La Mujer.”

“A smart poem that ranges from jelly slip-on sandals to Utilitarianism and Chuck Close, ‘La Mujer’ is a vivid statement of how a woman creates a niche for herself from what’s at hand and exceeds it, as heroes do,” says Zócalo poetry editor, Connie Voisine.

Angelica Esquivel is a Xicana writer and embroidery artist from Fostorio, Ohio. She studied English and Creative Writing at the University of Michigan, where she won three Hopwood Awards and the Quinn Prize for Best Creative Thesis. Her work has appeared in or is forthcoming from Crab Orchard Review, America, Rabbit, Chestnut Review, and Lunch Ticket, and she will begin her graduate studies at Bowling Green State University as an MFA candidate in fiction this fall. She currently lives in Ann Arbor, Michigan, with her husband and dogs.

Esquivel will deliver a public reading of her poem during the 11th Annual Zócalo Book Prize Lecture, which will stream live on May 20 at 5 p.m. PDT. Thanks to Tim Disney’s new sponsorship of Zócalo’s Book and Poetry Prizes, this year for the first time we will also recognize five poetry honorable mention award winners: Sophie Klahr, LeConté Dill, Ross White, Sophia Chong, and Ernesto L. Abeytia. Their poems will be published in May in the lead up to the lecture, and will be accompanied by original illustrations by artworxLA student artists.

“La Mujer” is below, along with an interview with poet Angelica Esquivel by Zócalo assistant editor, Kelsey Schoenberg, and an illustration of “La Mujer” by Dante Albano, artworxLA student artist.

Candyland’s queen is a believer borne of
jelly slip-on sandals and ruthless pretension,
sour offerings of limon y sal. Her niche
is here and aqui tu entiendes yin y yang—
pop can tabs in a jar above the stove, aguacate
ripening on the windowsill. Utilitarianism
embraced and stitched to something
lovely. On the wall, a painting of an elder in
the style of Chuck Close, rippling pixels of
gray mustache, sun weathered skin. She, his
queen, refuses to be reduced to a crankshaft
or piece of produce. She is the sole change
in a roomful of constants, syrup over
plywood paneling, corn husks soaking in the
sink. A silver braid snakes down her back as
she hums along to the accordion song, boiling
tap water and stealing secrets for lunch. 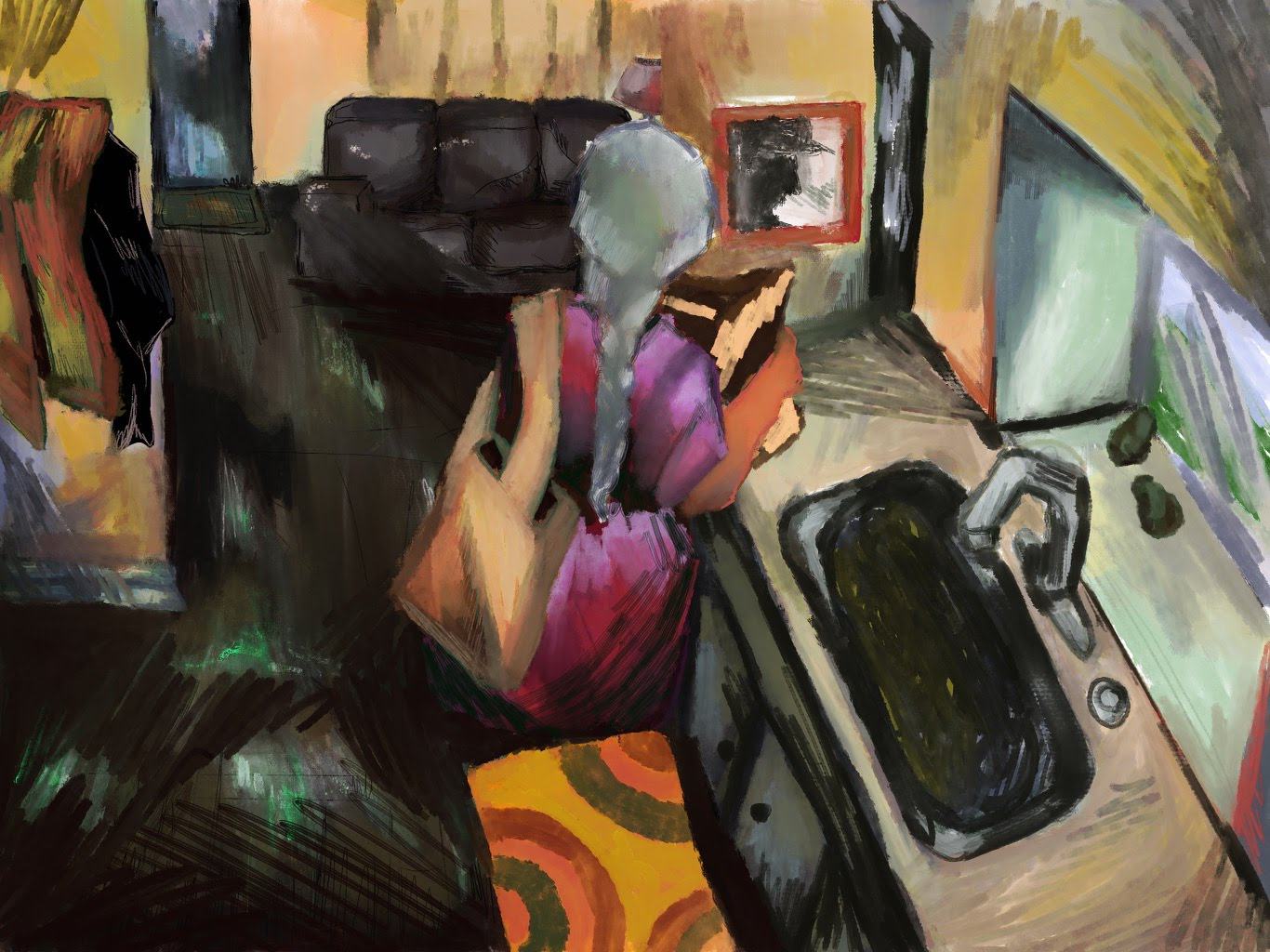 Who is La Mujer?

La Mujer is my grandmother. We all call her "Ma."

The theme of the contest is "place." How did you arrive at "La Mujer" from that prompt?

I was thinking about how a lot of my favorite and the most popular Latino literature tends to be written by Latinos who live in larger cities—L.A., New York, Miami, those kinds of places. The experience of being Latino in the Midwest, in a very small city surrounded by cornfields, is a different kind of culture that I don't really see represented.

[Place] becomes mythic, in a way. I'm looking back at the places that shaped me. Most of the time I spent with my grandmother was at her [Ohio] home or in her garden. So I see her always within these contexts. Going to my grandparents' house, the floors are unfinished wood and things are kind of strewn about, but in a meaningful way. There's an organized chaos—embracing and accepting the beauty that can be found in difficult circumstances.

And my grandparents primarily speak Spanish. So I feel like the language barrier has given them this air of mystery to me. I don't know a lot about my family history when my grandparents were younger because they don't seem to like talking about it. So writing about them, a lot of times I'm interrogating the mystery of where they came from and who they are, and trying to get a full picture of them as human beings from small interactions or the little things that they do.

Why did you choose to set the poem in your grandmother’s kitchen, specifically?

I grew up in the house across the street from my grandparents. They helped raise me. I was there almost every day. I spent a lot of time in that kitchen. [The reference in the poem to "painting of an elder in the style of Chuck Close"] is a painting my sister did in high school of my grandfather. That's also a part of the last line, where I say she's "stealing secrets for lunch"—my grandmother has always been like the neighborhood watch—in a good way and in a bad way. When I was a teenager, I was like: Leave me alone! But it was also kind of nice, because she was always watching out from the window and making sure that everything was safe and sound in the neighborhood.

The concept of yin and yang reoccurs throughout the poem and really anchors it. Can you tell me more about what it signifies in the piece?

It has a lot to do with the generational gap between my grandparents and me, and the cultural gap that comes with that. When I grew up, I didn't notice it as much, but now when I visit home I can see it really is just like these two cultures and these two time periods that are mashed together. It's this coexistence of their ideals and my ideals, and their culture and us younger ones who are more assimilated and more Americanized.

In "La Mujer," you write that your grandmother "refuses to be reduced to a crankshaft / or a piece of produce." Can you talk about the forces she's resisting?

A lot of times, [as] Latinos or Mexicans, we're identified in terms of our jobs, especially these jobs that society considers lesser-than. Like being a migrant worker, or being a cleaner, or things like that.

It's also connected to place because crankshaft is part of the car and that's something that is very much Midwest based. Especially in Ohio and Michigan, with the auto industry here. So that speaks to the change from being more outside and living with the earth as migrant workers to moving in and starting to do factory work in Ohio.

It's about how even though oftentimes we are defined by our jobs by society, and the fact that we spend so much time working—or they've spent so much time working these painstaking jobs, that she was still able to carve out her own identity, apart from that.

When you were writing "La Mujer," were you thinking about any particular poets or writers?

When I'm writing about my elders, I try to have a similar tone as Robert Hayden in his poem about his father, "Those Winter Sundays," because it acknowledges the hardness and the strife of their lives, but also how we got to where we are because of that sacrifice that they made. And that there's emotionality behind it. Because of their grit and their need to survive, a lot of times they're not able to open up emotionally because of cultural conditioning to suffer in silence.

I wanted to see through that and examine how everything around them is kind of buzzing with life.

It's been over a year since the pandemic hit. How are you reflecting on what you wrote in "La Mujer" in relation to this moment that we're all in?

Reading it now makes me miss my grandmother because I haven't seen her in a year or more. A lot of things have happened since then. She was caretaking for her elder sister and her nephew, and both of them passed away in the past few months, within two days of each other.

I just really wish I could see her and hug her and walk around the garden and look at her chickens. Just hang out and be near her. Especially as my grandparents are getting older and older, I feel like I need to spend a lot more time with them, and I should. Even though I'm not fluent in Spanish, I try my best to learn from them and learn their stories, and just be grateful that I have the opportunity to have elders with such strong presence in my life who have helped me grow up.