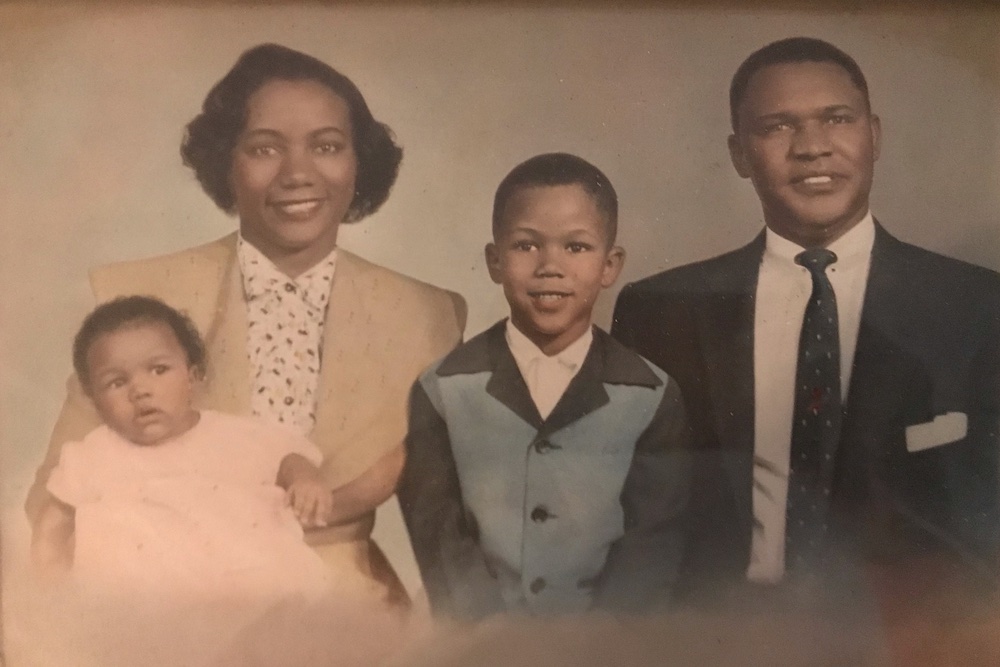 I am my father’s daughter.

I am the first-born daughter, the middle child, who was called Sweet Pea, Mama-Daddy, and Peanie. Naming is very important in the Black community. The act of naming is a great power, reminding each of us how to find one’s voice and how to define, and redefine oneself. Children’s nicknames suggest characteristics that relatives have observed, or into which they believe young people will grow; these can serve as the foundation of your identity.

Sweet Pea is my father’s endearing recognition of the energy and life-giving traits of the legume and the preciousness of the flower. My most important name, my official birth-given name, is Olga. It means “Holy One of God” in Russian, and when spelled backward, it is “A Glo.” I like to amuse myself by thinking my identity is somewhere between God’s holiness and the quality of illuminating others, but I know the real foundation is that I am my father’s daughter.

By association and genetics, that also means I am my paternal grandfather’s granddaughter. His name was Jason, and everyone, family included, addressed him as his professional name, Dr. Sneed. I never had the chance to meet him, but, hearing so much about him, I held him in awe. I grew interested in whatever connections he and I may have had. Many Black families are searching to know the history of their ancestors. And, for the past 26 years, I’ve been searching—as a scholar and as our family’s unofficial cultural historian—for my grandfather.

Born in 1877, Dr. Sneed attended the first medical school for aspiring Blacks in the medical profession in the South, Meharry Medical School in Nashville, Tennessee, at the turn of the 20th century. To date, my grandfather and I are the sole ancestral linkages to degree-granting achievement in the professional rank of doctor. His, a Doctor of Medicine (M.D.). Mine, a Doctor of Philosophy (Ph.D.).

For years, I had wondered what this other doctor was like, and why family members and relatives eluded my questions about him. As a child, I was told, “Don’t ever ask your father about your grandfather.” Being the precocious child I was, that was the very question I wanted to ask.

While completing my doctoral degree in human communication from the University of Nebraska in 1994, I had to decide on a topic for my dissertation research. I pondered for a long time, and was considering the study of the emancipatory persona of Black female slave narratives. In the course of my indecision, I mentioned my dilemma to my father, who finally gave me my opening. “Why don’t you write about Tulsa?” he asked. “There’s a lot of history there, and history about our family that you don’t know about.”

Cautiously, I approached the topic with which I was most unfamiliar. Still, I proceeded. “Um, Daddy, what was Grandfather like?”

He was silent, then responded. “Your grandfather was a fine man, dapper, one of the first Black physicians in Tulsa, Oklahoma, and a social activist. He spoke out against Jim Crow segregation and organized people when he was supposed to be silent. He was taken away to prison, and we lost him to lynching.”

He then paused for what seemed like a lifetime before he said, “You know, I’m 70 years old, and I still miss my father.”

Somewhere between the pain of that statement and the unheard tears of my father as he quickly hung up under the guise of a “bad phone connection,” I knew I had to locate Tulsa within me.

Over the next few years, I would spend research time in Tulsa and in Oklahoma City, mostly during summers, reading files, microfiche records, and turn-of-the-century newspapers at historical societies and libraries, and interviewing men and women who would have been my grandfather’s contemporaries.

The search for identity is an ongoing search for myself within the shadows of a people who have struggled, resisted, and survived the racial, economic, and social intolerance of Black life in America.

I learned that, after graduating from medical school, my grandfather relocated to Tulsa and established his medical practice. He was part of a larger migration in the early decades of the 20th century of forward-thinking, progressive Black business owners. Buoyed by the booming American oil industry, they established a presence in African Creek towns, such as Muskogee, and newly established Black towns, such as Boley, Langston, and Rentiesville, and began building community, establishing education for their young people, and growing their businesses. Those early settlers dreamed of a Black economic blueprint that would serve as a model for other Black towns and communities across the country. My grandfather, and other men and women like him who represented Black excellence in education, entrepreneurship, and business acumen, wanted to redefine the pathway of opportunity, success, and citizenship for Black people.

One result was the thriving North Tulsa business community known as “Greenwood” or “Negro Wall Street.” My grandfather’s medical practice—at the corner of Greenwood and Pine Streets—was just one of the businesses that filled approximately 40 blocks. There were shops, hotels, dental offices, a hospital, a library, theaters, barber and beauty salons, grocery and millinery establishments, and more. But with this newfound prosperity came hostility, fear, and jealousy by whites, leading to the Tulsa Race Riot/Massacre of 1921.

The search for identity is an ongoing search for myself within the shadows of a people who have struggled, resisted, and survived the racial, economic, and social intolerance of Black life in America. My research has guided me–not as a canine sniffs out a bone, but as a motherless child searches for an unknown parent, or as a veteran returning from war looks for that which will make them whole—toward the inclusivity of community. It’s that very inclusivity that the Tulsa Race Massacre sought to destroy during three days of pillaging, aerial bombing, and destruction by white mobs of the community my grandfather helped build. The reported death toll was 300, but many more lost their lives, homes, and livelihoods, while a host of Black bodies unaccounted for were dumped in unmarked graves.

When the Tulsa Race Massacre is mentioned now, it is spoken as something of the past, an event to be memorialized, as it has been this past week. But not everyone agrees on how to do so, or why. Until recently, even the name of the event failed to narrate it accurately: the Tulsa Race Riot, now known as the Tulsa Race Massacre. The term riot, in America, is often imagined as being linked to the idea of a violent Black presence, of Black bodies perpetually defined and affected by violence. In the context of Tulsa, however, riot reveals an enactment of white bodies representing the violent embrace of white racial domination. Here, the violence was solely perpetrated on Black Tulsan landowners, families, and businesses by whites. The term riot fails to capture the essence of brutality and attempted obliteration of those two days. The term massacre suggests the attempt at genocide, of wiping away the Black community of Tulsa and sending a message that a Black economic infrastructure in the U.S. would not be tolerated.

In February 2001, a Tulsan complained in the local newspaper, Tulsa World, “The Tulsa race riot is history you read about it, you learn from it, then move on.” But, what does it mean to move on? What about the stories of survivors, and how they overcame the haunting memories of burning homes, bombed businesses, and charred corpses lying in the streets of the once-booming Black business community? What about their descendants, grappling with generational trauma, like my father and me?

The account of my grandfather’s experience of living through the Tulsa Race Massacre has been told by my aunt, the late Willie Mae Thompson, respectfully known in the community as “Aunt T” and mother of Morning Star Baptist Church. Her most prominent memory was of my grandfather being “tagged” so as not to be killed but rather identified as one who could pass the restrictions of the local white militia. They allowed my grandfather, as a medical professional, a physician, to comb the streets of Greenwood to identify the dead Black bodies from the living ones. Imagine what he must have undergone, surrounded by charred remains and smoldering embers. Imagine the horrifying reality of identifying neighbors, former patients, church members, and young children he may have delivered in birth.

After those days of violence, the Black community was relegated to tents constructed by the Red Cross. They held on to their faith—a faith in God and in community that would create a spirit of endurance, a strength within that gave way to organizing, regrouping, and still attempting to rebuild—in spirit, in community, in memory. Resilience is a term often characterized by the ability to bounce back, to not give up, to refuse defeat. That was the character of these powerful, disciplined, courageous, and defiant people of North Tulsa and of the Greenwood business district.

Dr. Sneed’s death took place in the aftermath of the Massacre. I don’t know much more than what my father told me all those years ago, including exactly when he died. My research is a continual unfoldment of the story of my grandfather’s life, leading me on a path of deeper exploration and inquiry into reconciliation, reparative justice, and accountability.

The survivors of the Race Massacre are often thought of as a group—a sorrowful, pitiful group, dead, buried, and forgotten. Yet their accounts, told by some who are still living (a number that can be counted on one hand today), are narrative discourses—stories—that reveal lives of courage and love, struggle and resistance, pain and despair, and transcendence and hope for future generations of the Tulsa community and of African American communities at-large. The late Mrs. Mabel B. Little, a Race Massacre survivor at the time of my interview in 1996, was a successful business woman who owned a beauty salon in the Greenwood district. She offered this reflection in an oral history published in 2002, which captured the essence of the brilliance of Greenwood and the challenge of its remembrance:

We have lost our memory as a people, so that we have no clear vision of our future. We have lost our sense of direction, if not our sense of purpose. We’re going to have to return to the past to see where we have been so we can know where we are going; not to get bogged down in the past, but to use the past as a springboard to a new and as yet unimagined future. We must take the best of the past and leave the rest alone.

Acknowledging Mrs. Little’s admonition, I will keep snooping, digging, and finding myself in the Tulsa narratives of Black bodies’ lived experience while I continue the search for my grandfather, and to illuminate public memory of the continuum of struggle and resistance of African American life in the United States.

What I have learned is to be vigilant, and to embrace a culture of resilience established by the Black Tulsans in Greenwood in the telling of the story so that none will ever again forget nor fail to be taught and told.