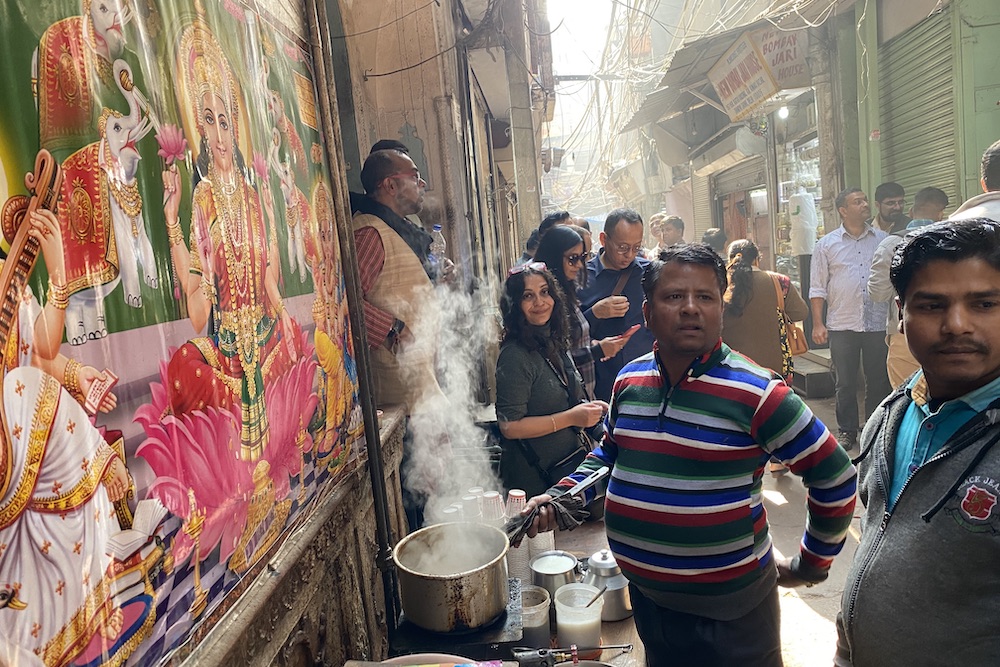 The rumor that you, the mayor of my adopted hometown, Los Angeles, will be President Biden’s next ambassador to my native country, India, is picking up steam. And so I wanted to be the first person to give you the lay of the land in Delhi, where I grew up and have close family members and childhood friends. I last visited Delhi in fall 2019, and my mother is currently in Dehradun (a bit less than 250 kilometers or 150 miles northeast) while the horrors of the COVID-19 pandemic unfold around her. Los Angeles has been among the cities hardest hit by the pandemic, not just with the high death toll among lower income communities but also vaccine inequities. A similar scene is playing out in Delhi right now.

But the Delhi I want to transport you to is the city you would encounter if you were to rewind to a time before this reality-altering pandemic. Just like Los Angeles, Delhi is a vast, vibrant, cosmopolitan place groaning under the weight of aging infrastructure and jolted by frequent tremors. Picture this: a city roughly similar in geographic size to Los Angeles, but with almost five times the number of people. If you include the neighboring regions that make up Delhi state, the population is larger than the entire state of California.

You and I, Mr. Mayor, are roughly the same age—I’m 15 months your junior—though you probably had a more promising beginning to your life. I was birthed unresponsive by nurses who didn’t want to revive me, my parents’ third daughter. My feisty mother snatched me from the jaws of death and raised me to be a bit of a daredevil. It’s those youthful adventures that I want to share as you consider the possibility of taking your own daughter to Delhi.

I envy you and your family moving there, though 21st-century Delhi can confound Americans, even as it offers compelling lessons for American cities.

Take transportation. You’ll find that many buses heading to Delhi University are designated “Ladies Special,” so you’re not going to be able to board those. You will be attacked with safety pins and umbrellas if you try. The Delhi Metro, too, has entire cars just for ladies, which are an olfactory haven in the long, sweaty summer months. You haven’t been able to truly move the needle on ridership on the L.A. Metro. The excuse that Southern California is too car-centric and sprawling for transit is a poor one, as Delhi will teach you: The city has cars, auto rickshaws, buses, and a Metro… all of which are crowded to capacity.

Just like Los Angeles, Delhi is a vast, vibrant, cosmopolitan place groaning under the weight of aging infrastructure and jolted by frequent tremors. Picture this: a city roughly similar in geographic size to Los Angeles, but with almost five times the number of people.

You will see that what L.A. lacks are the connectors from neighborhoods to public transportation hubs that make Delhi’s options more used by its populace. While the Marines guarding you may dissuade this, you should try some of them. Go to the local market in a “scootie,” a compact three-wheeled rickshaw meant to seat two but routinely carrying an entire family, all bouncing along happily. For longer rides, try a bus, and if it’s too crowded, just hang onto the ladder that connects to the rear bumper. You save a couple of bucks if the conductor can’t grab you and demand that you pay for a ticket. Though if the Delhi Police spot you, be prepared to make a running jump.

Whatever transportation options you choose, you should take advantage of all the food choices that Delhi offers its people. I’m sure you will receive many elegant dinner invitations from Delhi’s power brokers. I went to university with many of them (riding the aforementioned Ladies Specials), and you can be assured of impeccable manners, guest lists full of Rhodes Scholars like yourself, lavish meals catering to every dietary need (including veganism), and live music to boot. 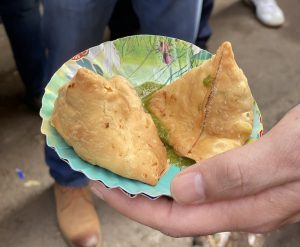 Had you gone to Delhi in the early ’90s, I might have been the crooner softly singing jazz standards in the corner (much to the horror of my friends’ parents). After such engagements, my band would usually head to local restaurants: Chicken Inn on Pandara Road for a non-veg platter, Sagar in Defence Colony Market for dosas, or to Old Famous Jalebi Wala in Chandni Chowk for samosas and jalebis.

When you need a break from endless meetings, head on out to Bhimsain’s Bengali Sweet House. It’s pretty close to the embassy and perfect for an afternoon cup of chai with chaat and panipuri—a dish once made even tastier by the owner, who sat in lotus pose with his right foot protruding so that he could punch a hole in the round pastry with his interestingly long big toe nail. For fast food, don’t bother with any of the American chains like McDonald’s or KFC; opt for the many street food stalls called dhabas or reydiwalas. They serve their food in packets made from old newspapers and plates fashioned from dry leaves, with tea filling earthen cups that you just smash to pieces when you’re done. It’s the original recycling—no loading the dishwasher required!

You also should be aware that Delhi has its own housing problems, though the crisis there is very different than L.A.’s.

You’ll be among the fortunate to have a roof over your head. The ambassador’s residence is tucked inside the fortress-like U.S. Embassy on Shanti Path, which means the street of peace. Your neighbors will be your fellow diplomats. Each embassy is a tribute to its culture. The blue dome of the Pakistan embassy, the regal emblem of the British High Commission, the Soviet-style architecture of the Russian embassy, the sandstone arches of the Saudi embassy… all now sadly hidden behind impenetrable walls and electrified fences.

This was the vista I passed in the 1980s en route to the Delhi School of Music, where my parents dragged me and my sisters to piano lessons. You, a concert pianist, will find the school to be a treasure trove of lovingly well-maintained concert grands to bang away on. My older sisters were pretty good pianists, but I remember the director, Hosi Palamkote, shaking his head at my disappointed mother, “She should stick to singing.” That was good advice. Sticking to singing got me into the prestigious St. Stephen’s College, where the principal, Dr. Varghese, remembers to this day my rendition of “O Holy Night” at the Christmas Mass, to which the U.S. ambassador is often invited. 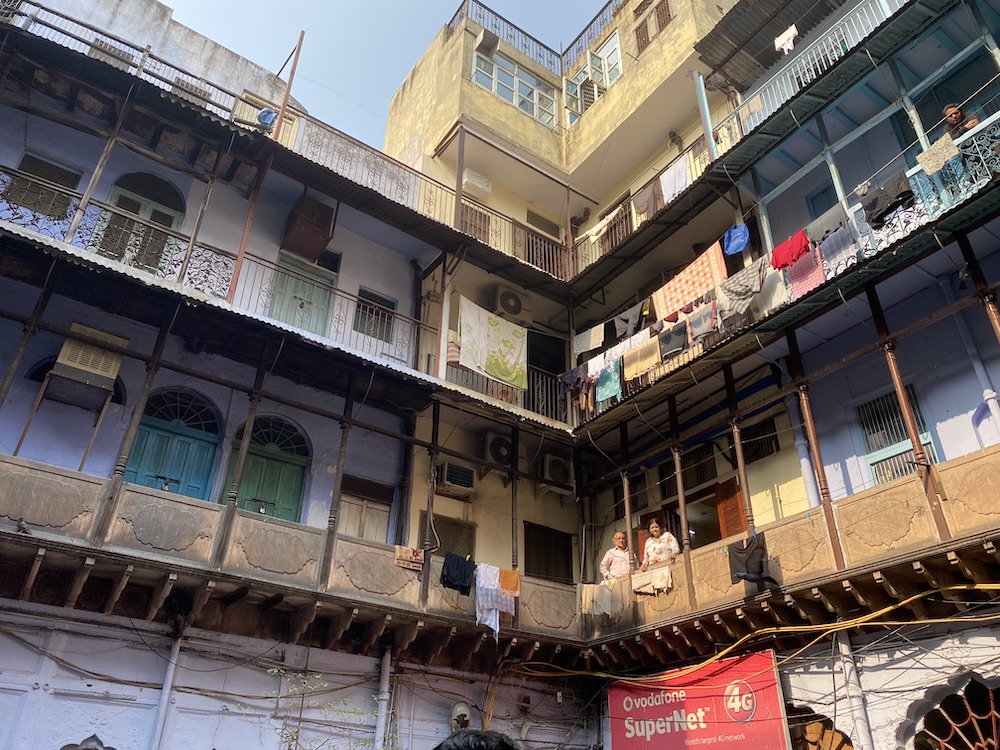 But let’s get real—this is not how 99.9 percent of Delhi, or India, or California, for that matter, lives. Delhi’s big solution to housing is public. A large section of the middle class resides in apartments built by the DDA (Delhi Development Authority), allotted to them via an opaque method that no supercomputer can comprehend. After my parents retired from their teaching jobs, we were able to rent one of these boxy, poorly ventilated units thanks to the extra income from my singing gigs and my sister’s job at the British High Commission on Shanti Path. When I took a job in Mumbai, my parents moved to Noida, a vast development built on the old Yamuna River bed. This was a huge upgrade, but got off to a bumpy start with a power outage that took local authorities three years to restore.

Yes, you will see a heartbreaking level of poverty, but there is a huge difference between the street dwellers you will encounter in Delhi and the homeless population of Los Angeles. In Los Angeles, by and large, the unhoused are individuals struggling to navigate the systems of an unequal society plagued by decades of racist housing policies. Delhi’s homeless, by contrast, are mostly entire families, including grandparents and infants, who have traveled to the big city in the hopes of earning a living just to survive. When India started down the path of development and modernization, construction in cities boomed, drawing able-bodied young men from far-flung villages. Entire communities sprung up at construction sites, where you will see the skeletons of high-rise buildings populated with laborers and their children living in tenements. When these buildings are finally completed, the entire community usually moves to the next construction site, but several end up on sidewalks and under flyovers. Many children get access to education through American-supported NGOs and upskill to jobs as drivers, household staff, and shop attendants.

Life on the streets of Delhi is brutal and crushing. My childhood ayah was one such person—her husband was the watchman at the school where my parents worked, and sadly she took her own life by jumping off a building. My parents later adopted another family living on the sidewalk near our home and paid for their youngest son’s education while his mother, Maya, was a cleaner at the school. Sadly, Maya also took her own life by jumping in front of a train. You will pass by these people as you are chauffeured around the city in an armored car, so I wanted you to know some of their stories.

There is more to say about Delhi, and more for you to see. But the tenures of American ambassadors are short. My hope is that you will stay in Delhi long enough to be transformed in unexpected ways. And that if there’s one thing you take away from your time there, it’s the capacity for cities to change themselves, and reckon with problems in unexpected ways.

Delhi, after all, is an ancient place. The walls of the city have risen and been felled at least eight times since 1400 BCE. Los Angeles will also have to adjust and evolve—perhaps faster than it has recently—if it wants to live as long. Perhaps you can bring both ideas and some of Delhi’s enduring and adventurous spirit back to L.A., and tell us all about them, as you ride around town on the ladder attached to the exterior of a Metro bus.