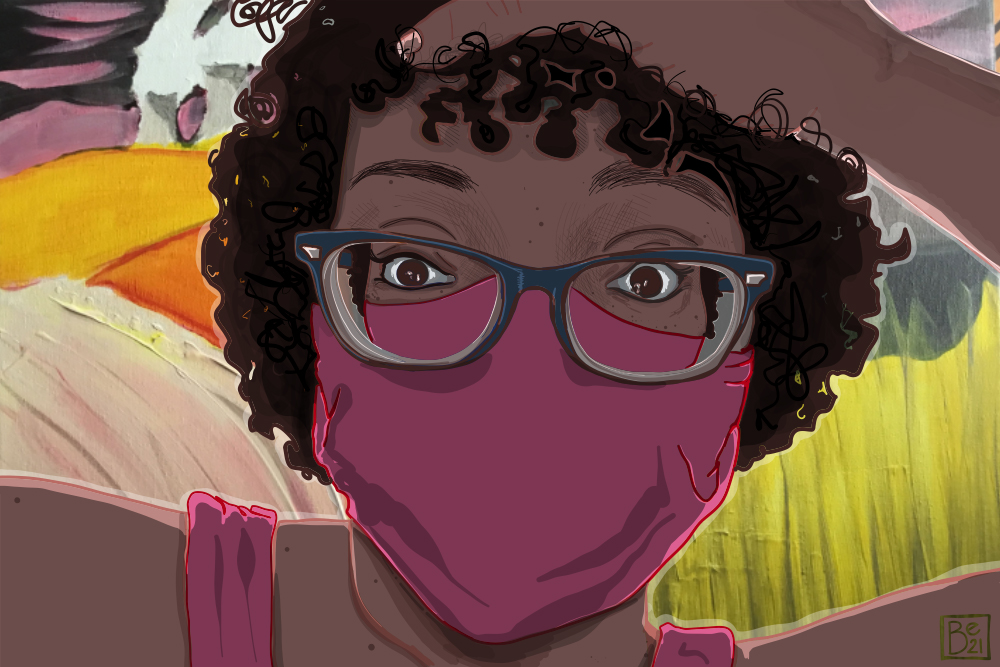 I can vividly recall the final time I hugged friends before the lockdown. We were crowded in the velvety closeness of a dark music venue where they were performing. I was robed in embraces and rhythm—rich in love, not knowing this night would be the last of its kind for a long time.

When the pandemic hit, my life was rocked like everyone else’s. But while the changes were swift and thorough, they were not unlike anything I had experienced before.

In the 1970s, I was born into a small cult whose members considered themselves agents of change who were going to save humanity from itself. Our Santa Barbara group was the last remaining remote cell outside of Pennsylvania, and as a girl, I imagined myself to be some kind of secret agent of God, a black-ops nun hiding in plain sight.

It has been decades since I participated in the group. I do not believe their tenets. My life’s work has been to untangle the effect those teachings had on me. But ironically, it was my time in this religious cult that prepared me to dutifully obey science when the epidemic hit.

To me, the isolation of lockdown made sense. Like back in the day, all I had to do was follow the rules to save humanity—only this time, I knew I was following good science to aid the survival of my immune-compromised mom and me.

Rule-following was considered the closest thing to holiness in the cult, and one of the easiest ways to prove your holiness was clothing. Virtue-signaling, we call it today. When I was 12, I wore a forbidden sweatshirt emblazoned with a Mickey Mouse across the front. As punishment I was not allowed to participate in any services and my family was told not to talk to me until I was approved to return after two weeks. That’s how I became habituated to rule-following.

Now, decades later, Dr. Fauci was saying we needed to follow the rules to save humanity. So he made recommendations, and I followed them. With my mom’s immune system wrecked, the idea of even being a little relaxed with social distancing or being outdoors other than for anything truly “essential” was not an option. I stayed indoors and away from people. I even sacrificed walks in the open air. To me, the lockdown was like a kind of solitary monk-like cell confinement, and I was proud of my discipline.

I slipped right back into my old default judgment of rule-breakers, too, condemning the unmasked, the improperly masked, and the toilet paper hoarders with ice-cold glares.

I felt my paranoia of “infection” also returning. In the cult, “beware of the infected” meant always being on the lookout for the morally impure. During those years, I recall thinking that “The Others” were waiting whenever we ventured into public, like Lampwick from Pinocchio. Around every corner they were ready to pounce with temptations like decadent food, drugs, rock & roll, fashion, or the lie of freedom—all distractions from my divine purpose.

When the pandemic hit, my life was rocked like everyone else’s. But while the changes were swift and thorough, they were not unlike anything I had experienced before.

Now this fear of infection was coming out during trips to the grocery store—my asthma magnifying the urgency of my breathing. Putting on my shopping uniform felt like a comforting ritual: two sets of gloves, two masks, and a hat. I’d crushed my Achilles Tendon weeks before lockdown, so I was also in a boot and on a crutch. What a sight I must have been: Broken Terminator soccer mom wheezing like Darth Vader. My double-gloved hand would reach for an apple, cheese, or can, hyper-conscious that other people’s dirty mitts had smeared their infection on them.

But these flashbacks paled with those evoked by being cut off from physical affection. I’m known for both giving and receiving nurturing hugs. Cut off from my friends and loved ones, in this state of total absence of touch, a difficult memory ambushed me.

When I was a child, I’d had this repetitive vivid nightmare: President Reagan pushed the nuclear button, and warheads sailed across the sky to kill the world. Every city was burnt-out Beirut. Orphaned children filled the streets. The nightmare induced a cold, sweaty panic that sent me running to my mom’s arms. But one night, when I was 8 years old, she told me she couldn’t hug me anymore. New rules. I stared at the pattern on her sweater, hoping to fall into the knit and disappear. I knew to go against the rules was to go against God, and the God I knew was always making me do the uncomfortable thing for my spiritual growth. Recalling this moment in lockdown, I was surprised to find I was ready to miss my friends’ hugs. My mother’s retraction of affection had inoculated me for this pandemic moment.

The one good thing I can say about the cult is that it taught me that making sacrifices for the greater good is a strong moral choice. That’s why I haven’t been able to comprehend why people—especially religious people—have had such a challenging time sacrificing a little of their freedom to keep other people alive during this time.

Of course, the cult took this philosophy to the extreme. Back then, we were trained to cut ourselves off from the outside world so we could focus on our divine assignment to save humanity. That could mean breaking ties even with immediate family when necessary. A family could also be asked to move from across the country. If you did not adjust without complaint, you were vulnerable to various penalties.

My family got that call—the invitation to join the main ship in Pennsylvania—when I was 11 years old. It was like Gabriel’s horn sounding just for me, urging me to pack only what we needed and to discard all else as dead weight. We moved from a tropical California garden paradise to the leafless, slate gray Colonial East on Halloween Day. Being in divine service, I had imagined our new home to be Elysian Fields, a place of the gods. But the November sun was colder than snow.

When my family left the cult five years after we moved to Pennsylvania, the isolation—different from the isolation of being on the inside—crippled me at first, and I did not handle the transition very well. But this spring, when it was my time to get vaccinated, I only felt excited and impatient for life to begin again. Still even I couldn’t have anticipated how much being fully vaccinated has made me feel like Spider-Man: ordinary on the outside, but fortified within.

As I wrote this piece, I paced in front of my keyboard. Memories of being shunned as a child, disallowed from group activities for perceived infractions, hit me like a punch to the gut. I worried how the living cult members would judge me. But the idea that I’d have to wait for everyone to die before I could talk about my truth started to disintegrate when I realized I needed to own my voice and experience, to embrace that power within me.

Coming out of isolation, I’m ready to gobble up the world. I can accept the Shabbat dinner invitations and attend the live music concerts my friends host in Joshua Tree. And I can’t wait to once again give my famous hugs—preferably on the way to the airport to see what else is out there.