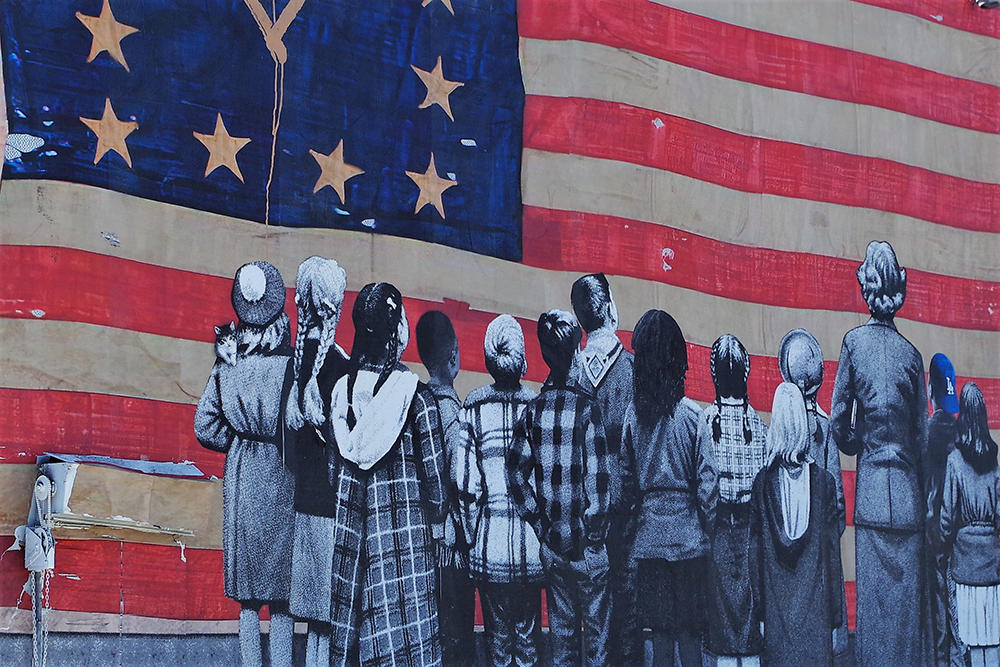 I get how hard it is to admit defeat, to lower expectations. Even when things are breaking down in every part of the national machine, from public health to education to foreign policy to law enforcement, it’s hard to let go of the easy triumphalism that has characterized so much of American life.

Triumphalism is a domineering mentality that took off when the U.S. became a superpower in the mid-20th century. A byproduct of the old American exceptionalism—the belief that the U.S. is unique and even divinely blessed to lead humanity to a brighter future—triumphalism promises that the U.S. will always magically prevail: bloodied and dazed like Rocky Balboa, perhaps, but still knocking out the bad guys in the final round. It can provide a useful survival mechanism, offering promise and comfort in the crazy time of COVID-19, that the U.S. deserves to wag the giant foam finger that says “We’re No. 1!”

But even in its most understandable form, American triumphalism is wishful thinking. To create a more ethical, sustainable, and humane country at home as well as moral credibility abroad, we need to see the consequences of our collective actions with clarity, rather than hiding behind comforting mythologies that keep us from seeing the obvious defects in our plans for Afghanistan, Iraq, or the pandemic. We need to acknowledge our national limitations, not pretend that they don’t exist. Like a narcissist on a dating app, we need to lower our expectations.

This became vivid to me this summer. I live in the sunny boomtown of Austin, Texas, one of the most hyped and happenin’ cities in the world, a financial and cultural juggernaut propelled by high tech, a massive flagship university, and a groovy laidback attitude. One day I was out enjoying a swim at the beautiful Barton Springs, watching hippie yoginis and grad students reading philosophy in the sun, feeling that Austin was still a cool little blueberry in the middle of inflamed red Texas. The next day, at the Texas Capitol just a few miles away, Gov. Greg Abbott signed S.B. 8, a notorious law—referred to as “the heartbeat bill”—that empowers citizen vigilantes to file lawsuits against anyone helping someone get an abortion after six weeks, even in cases of rape or incest, even if their only “crime” was providing a ride to a clinic.

It shook me. Everywhere I looked around Texas in the following weeks, I saw democracy being smothered under a pillow of hate, privilege, and the narrow self-interest of a white conservative minority. Throughout the summer, Gov. Abbott rolled out new voting restrictions targeting the poor, Black, and brown in ways that can only be called Jim Crow Redux. The state adopted a “permitless carry policy” that lets anyone walk around with an unregulated handgun in full view (even police chiefs lobbied against this one, which could make things messy for them during the active shooter incidents that are almost as regular here as Friday night football). And the state began blocking teachers from engaging students in important discussions of white privilege, and other political subjects that offend right wing sensibilities.

Who wins when we pump up American hubris to the point at which we can’t even see the suffering we cause?

Conservatives have been shilling these kinds of exclusionary and retrograde policies for decades, hiding behind the flag—and an imagined, monolithic, triumphalist America—as they chip away at Americans’ actual rights, one by one. It’s a stance that combines with reckless foreign policy and environmental thoughtlessness to convince some Americans that, simply because they are American, they owe nothing to notions of justice, stewardship, fair play, or true individual liberty—and that they never have to question anything. Donald Trump, the purveyor of endless bogus sales pitches (Trump Steaks, Trump Air, Trump Vodka, Trump Magazine, Trump University), is just the latest face of it. Abbott, who papered over the power grid failures that killed 200 Texans in February 2021 with hollow proclamations about energy independence and the Texas can-do spirit, engages in it all the time.

But who do these fictions serve? Even when such dogma is couched in conceit—“Perhaps we’re flawed, but we’re still the greatest country ever!”—its ramifications are clear. We stop noticing when our neighbors lose rights, or when our actions harm foreign friends or the Earth itself. Who wins when we pump up American hubris to the point at which we can’t even see the suffering we cause?

The influential Christian philosopher Reinhold Niebuhr thought a lot about dynamics like the ones playing out in Texas today. A believer in the “ineluctable tragedy” of the human condition and a complex vision of Christianity that has nothing in common with the huckster megachurch “prosperity gospel” of today, Niebuhr argued for a thoughtful politics of humility and moderation, not boastful certainty—in the U.S., or anywhere else. He said that the U.S. “must slough off many illusions which were derived both from the experiences and the ideologies of its childhood innocence,” warning that, “[o]therwise either America will seek escape from responsibilities which involve unavoidable guilt, or it will be plunged into avoidable guilt by too great confidence in its own virtue.” Dr. Martin Luther King, Jr. extended this critique of American victory culture in the 1960s, rejecting U.S. imperialism and capitalism with a fury that has often been whitewashed out of popular memory. A decade later, Jimmy Carter asked Americans to raise their thermostats a few degrees and wear sweaters to save energy. The right wing mocked him as a wimp and a clown: how dare he imagine life with any limits, in God’s special garden of privilege and power?

People who assume America is always the champ (and always should be the champ) cannot understand our real history of oppression, exclusion, and failure to secure a prosperous and secure life for many of our own citizens—let alone for the people in countries where we intervene as a global hegemon, promising to bring freedom to the masses but delivering a much more uncertain outcome.

Recognizing our shortcomings is neither nihilistic nor anti-American. To the contrary: If America has the capacity for collective goodness, and greatness as a country, we must earn it through the hard work of self-honesty, not simply by declaring victory while stumbling forward into the next quagmire at home or abroad. Here in Austin in 2021, that means challenging the obscene war on historical truth, reproductive rights, and racial justice that mythmakers on the right are waging for their own self-interest. As a country it means we must reject the empty promises of MAGA victory culture in favor of real American virtues that rest on evidence, nuance, compassion, and an acceptance of our own limitations.

It is only by making peace with our national failures, limitations, and even decline that America can become more effective on the world stage and at home. But if we don’t change our mindset, we’ll find ourselves falling victim to the next huckster (or the same one!), selling us on how they’re going to make us “great” again without a clue where to even start the process.