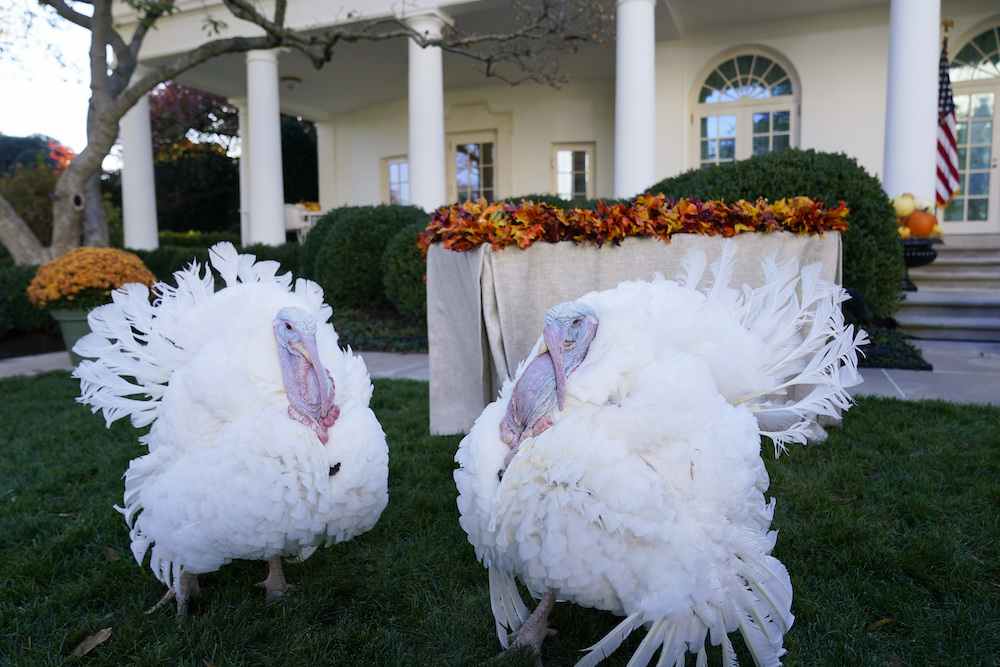 This year's national Thanksgiving turkeys, Peanut Butter and Jelly, in the Rose Garden of the White House before a pardon ceremony. Courtesy of AP/Susan Walsh.

“Merciful President Pardons Turkey” declared headlines when John F. Kennedy saved the turkey gifted to the White House from being on the dinner table in 1963. But the tradition of sparing a turkey goes all the way back to when Thanksgiving was first declared an official holiday a century prior, in 1863. That year, Tad Lincoln, youngest son of Abraham and Mary, grew attached to the live turkey that had been sent to the White House and persuaded his dad to grant clemency to the bird to stop it from being on the menu.

Today, the pardoning of the national Thanksgiving turkey is an annual White House staple, complete with TV crews capturing the live pageantry. But this pomp and circumstance surrounding the pardon masks the larger question: Why we are granting clemency or extending mercy to turkeys in the first place?

A pardon entails the waiving of a punishment and the restoring of one’s civil liberties, while a reprieve delays imposition of a sentence or punishment (often because the sentence or punishment is seen as unjust given the crime). Importantly, none of these actions erase the guilt of the person to whom it’s being granted. But turkeys cannot commit crimes. And so the purpose of the president pardoning a turkey (or two) right before Thanksgiving only serves to mask the realities faced by those particular turkeys, and for that matter, most turkeys in the U.S.

The fate of turkeys in what is now the U.S. is to be a brutalized commercial product that symbolizes a meal of peace that masks the brutality of European settlement here and the genocidal policies that attempted, but did not succeed, in wiping Native people completely off the map.

Commercially bred turkeys grow quickly and produce a lot of meat, especially breast meat. Their large breasts make natural mating difficult, so they are bred through artificial insemination, and their eggs are placed in an incubator to hatch. Neither the process of collecting semen nor the process of insemination is done gently. The chicks hatch in batches of 10,000.  They are usually debeaked, desnooded, detoed, and have their spurs trimmed so they won’t harm one another as they grow in barns crowded with 7,000 to 10,000 birds. They remain in light at all times to promote eating and growth, reaching their slaughter weight in three to four months.

The U.S. produces about 250 million such turkeys each year. One or two of them are “pardoned,” and are generally sent to an animal sanctuary to live out their lives. But those lives tend to be fairly short. These turkeys usually have to be kept on special diets (which may well leave them hungry most of the time) in order to slow their growth and prolong their lives. If they are allowed to eat normally, they will grow too large for their bones and legs. Given that they have been bred for maximum growth and early maturity, it is not clear that the “pardon” is in the interest of the turkeys. It seems to be about making humans feel better about themselves before they sit down to a Thanksgiving meal.

The Thanksgiving holiday is fraught with hypocrisy and outright brutality. The fate of turkeys in what is now the U.S. is to be a brutalized commercial product that symbolizes a meal of peace that masks the brutality of European settlement here and the genocidal policies that attempted, but did not succeed, in wiping Native people completely off the map. Turkeys are linked to this history; indigenous to the Americas and first domesticated by Native Americans, they played an important role as food and as a religious sacrifice for many Indigenous peoples. But European colonists overhunted wild turkeys and continuously pushed them off their native habitats. By 1930, only a few hundred thousand wild turkeys were left.

Colonists also took turkeys back to Europe—kept in narrow cages and often force fed—where they became a popular food item, particularly for the Christmas holiday. With continued European immigration to the U.S., turkeys became a common food bird here as well. The American meat industry began breeding and raising them in ways that ignored their naturally seasonal reproductive patterns, denied their natural patterns of eating and movement, and showed no respect for their social and inquisitive way of being.

At the same time that the annual numbers of commercially raised turkeys were moving from tens of millions (1940s) to hundreds of millions of birds (1960s), efforts to reintroduce turkeys to the “wild” also started to take hold. But this work was not done for the sake of the turkeys or to make amends for hunting them nearly to extinction. It was done, like many American wildlife restoration efforts, so that turkey hunting could once again be a popular and profitable activity.  Many wildlife restoration efforts in the U.S. owe their success to the fact that hunters wanted to hunt them. The 1937 Federal Aid in Wildlife Restoration Act taxed hunting guns and ammunition to fund wildlife restoration efforts. For turkeys these reintroduction efforts were successful, and by 1950, there were about 500,000 “wild,” or more accurately, free-living turkeys in the U.S. By 1973, that number was estimated to be 1.5 million, and in 2005 it reached 7 million. Ironically, it was the ready supply of commercial turkey meat that allowed for the successful reintroduction of free-living turkeys. Since there was such a robust supply of commercially bred turkeys for the dinner table, for lunch meat, and for burgers, the hunting pressure could be removed from the free-living birds and allow them to recover.

While free-living turkeys spend up to five months with their mothers, learning a lot about where to find food and how not to be food for others, domesticated commercial turkeys never know their (or any) mother. They don’t range over territories, mate, brood, or find their own food. They end their very short lives by being tightly packed into crates and shipped to a slaughterhouse, where they are hung upside down while still alive. Most are slaughtered by being electrified, then having their throats slit, but if they are not the standard size, they may survive these measures. This results in live birds being dunked in scalding water before they are defeathered. Given that the turkeys have been living in their own excrement, the slaughter process often promotes the spread of disease. Turkey meat is regularly recalled due to salmonella and listeria contamination. The commercial production of turkeys has a detrimental impact on the environment and harms human health through the consumption of contaminated meat and through air and water pollution.

It seems that the human commercialization and mass consumption of turkeys is a crime that needs our attention, and not a pardon. The poultry industry is guilty of overusing antibiotics, creating toxic amounts of manure, polluting waterways and killing fish, polluting the air, and forcing a painful and unnatural life and death on hundreds of millions of turkeys each year in the U.S. alone. As we rethink the myths this country was built on, it’s a good time to reflect on the crimes we are all complicit in as well.