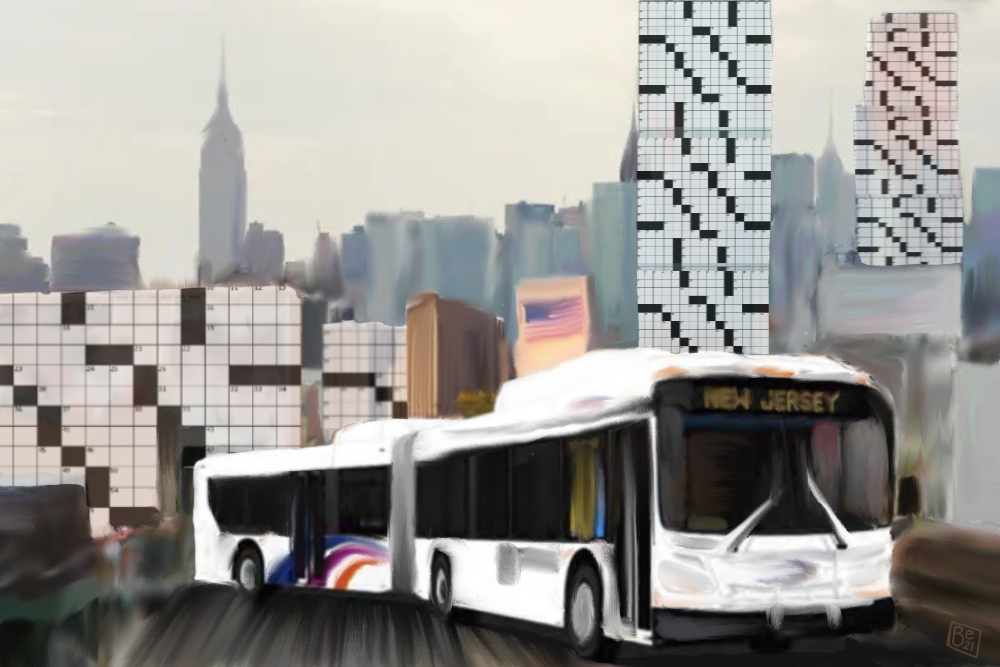 When I moved to northern New Jersey in 2012 and took a software test engineering job in midtown Manhattan, I suddenly found myself with an hour-long bus commute. I’d solved newspaper crossword puzzles sporadically for the preceding 15 years, but I had very little patience and wasn’t very good. So when I resumed my crosswording during those long trips, I was determined to become a better solver.

There’s a perception that in order to solve challenging crosswords, you have to be some sort of master of obscure facts, like a Jeopardy! contestant. The reality, however, is that you don’t have to be a know-it-all to become good at crossword puzzles; persistence and dedication are the most important traits. Because a crossword is a bit like an escape room: The author intends to make it challenging, but ultimately, they want you to be able to crack their code. After noticing that all of the New York Times puzzles had bylines, I figured, why couldn’t one of them be mine? I could construct a puzzle of my own—and have it published in the Times, the gold standard of the form.

I bought crossword construction software and a dictionary of valid crossword puzzle entries with scores indicating how “good” they are—for example, TSPS (as in the abbreviation for teaspoons), is considered a mildly acceptable answer with a score of 25, but TOP is a very common word with a score of 50—and dove in.

I started with a blank 15×15 grid, the standard size of all Times puzzles, except for Sunday’s supersized 21×21 grids. To start, I laid out my theme entries—the handful of related answers that form the backbone of the entire puzzle. It was a baseball-themed rebus puzzle (which means you enter more than one letter in certain squares) with the words HOME, FIRST, SECOND, and THIRD placed on the grid in a shape resembling a baseball diamond. Then, placing black squares strategically around my theme entries, I built my grid, which consisted of mostly 3-5 letter answers and a small number of 6-8 letter ones. Next, I started filling in the rest of the puzzle, the most complicated and time-consuming step. Finally, I got to clue writing, the easiest part. This is where a constructor can take an ordinary answer, such as OBAMA, and make it more interesting by cluing it as “Noted 1983 Columbia graduate.” A boring alternative could be “U.S President: 2009–2017.”

The differences between an amateurish puzzle and a professionally constructed one geared toward a wide audience are subtle.

After reading, rereading, and more rereading of my puzzle, I decided that it was as good as it was ever going to be. So I sent it off to the Times and anxiously waited for their response. Several weeks later, I received an email from a Times staffer writing on behalf of editor Will Shortz—perhaps the most famous figure in the puzzle world—with the subject line “Crossword.” His answer was basically, “Thanks, but no thanks.” Frustratingly, I received nearly the same rejection from Shortz and his colleagues for the next several puzzles I submitted.

I was definitely down on myself at this point—clearly, I needed more help and guidance. So I found my way to the Crossword Puzzle Collaboration Directory group on Facebook, the creation of veteran constructors trying to increase the number of people regularly contributing to daily newspaper crosswords. There, members post questions (e.g., is Y-WING, the name of a type of starship from the Star Wars films, crossworthy?), theme ideas, sample puzzles, and tournament announcements. In the group I connected with Mark, a more experienced constructor who became my mentor, and who responded to my theme queries and puzzle drafts with an expert and impartial eye.

The group—which anyone can join—provided the constructive criticism I needed. The differences between an amateurish puzzle and a professionally constructed one geared toward a wide audience are subtle. For example, only after you’ve been doing this for a while do you understand that clumps of moderately difficult proper nouns are bad because solvers can get stuck and would have no way of gaining a foothold in the area.

While my Times rejection streak continued, some of those rejected puzzles were eventually accepted by other publications. My first-ever published puzzle ran on April 4, 2019, in the L.A. Times, and had theme answers of LAB ASSISTANT, SKETCH ARTIST, WORKOUT ROUTINE, and SNICKERS ALMOND, with GO FISH as the answer that revealed the pattern. Over the next 18 months, I had another three puzzles accepted for publication, including by the Wall Street Journal. But the New York Times remained elusive.

I learned that there was considerably less competition for the New York Times Sunday slots, and set my sights there. After much brainstorming, and an investment in a rhyming dictionary, I came up with a theme that used wordplay to poke fun at how Canadians stereotypically end their sentences with “eh.” One of my theme answers was LET’S MAKE A DELAY, which is supposed to sound like, “Let’s make a deal, eh?” My original clue: “We should slow things down, shouldn’t we?” After coming up with six other similar entries, I started the difficult task of making a usable grid.

I calculated that there were 144 possible ways to lay out my theme answers in the big 21×21 grid. That’s where my computer science degree came in handy: I wrote a simple computer program that went through each of the 144 possibilities and told me how promising each option was. After several weeks of dithering with various layouts, I was finally able to create a usable grid for my puzzle. After making some edits at Mark’s suggestion—like cutting back on proper names in the northwest corner and getting rid of words no one knows like SETAE (the plural of “seta,” a stiff hair)— I sent my puzzle off to the New York Times. And then I waited. A few months later, I got something new in my inbox: an actual acceptance message from the New York Times! They weren’t too keen on the whole “Canadian-speak” angle of my theme, though, so they changed those clues to be more straightforward. (The clue for LET’S MAKE A DELAY became “Maybe we should stall.”) While that was a bit disappointing, it was an acceptance nonetheless. All my hard work finally paid off. Naturally, I told all my friends and family to get a copy of the paper on the publication date, March 21, 2021.

After crossing “having crossword published by the New York Times” off my bucket list, I’m semi-retired from building crosswords. To publish just a few puzzles in various venues each year still would require me to always be working on a new puzzle, and I don’t have the time for that right now while working and raising a family.

But I do still try to come up with ideas and also to solve other people’s puzzles. Now that I’ve made some of my own, I’m able to form my own opinions and offer reasons for why a particular puzzle is good or not. And the lesson I learned from the several weeks it took me to construct that 21×21 grid is that even if it feels like an impossible task, it’s probably not. Very few things in life are truly impossible.