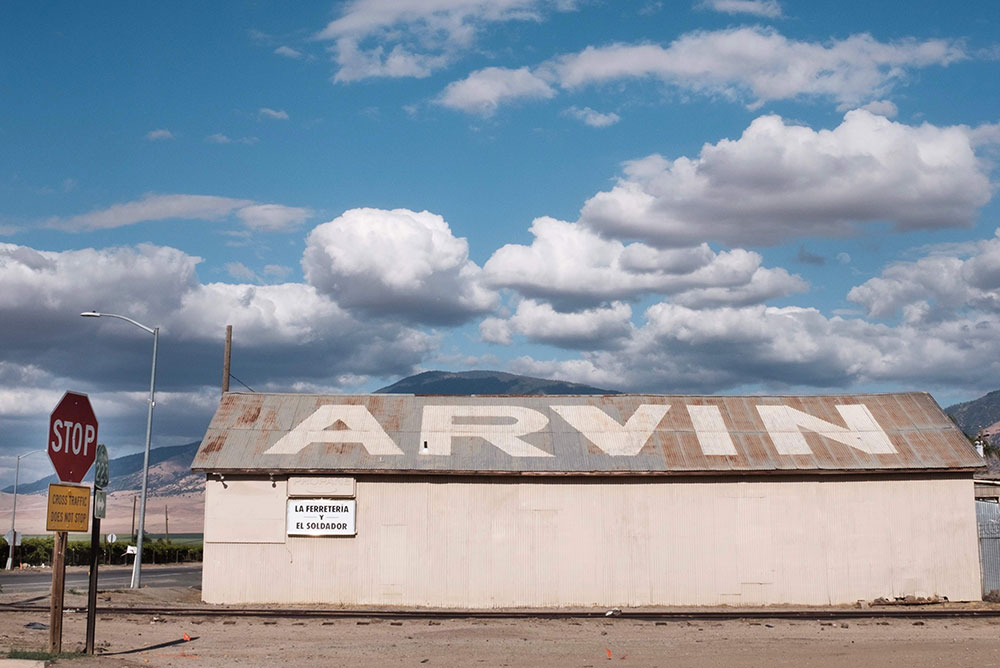 "It was like seeing your name on Broadway, if Broadway was in the middle of nowhere and you’d never heard of it." Image by author.

I used to wonder: Is there any place where people will know my name?

I’ve always hated Arvin, my uncommon, easy-to-mangle name. For most of my life I didn’t even know where it came from. When I was a kid I asked my father, who is from India, what my name means. He told me, “beautiful face.”

A skeptical child, I didn’t believe him. A recent Google search confirmed my suspicions, revealing no such translation and no correlation between my name and a predisposition to attractive features. So, not long ago, I asked my father again about the origins of my name. This time he had a different story. The common Indian name, he told me, is Arvind—with a “d.” My parents had decided to remove the “d” to make the name sound “more American.”

Hold on. First of all, what happened to the whole “beautiful face” thing? You can’t just take that back after you see how the face turns out. And, second, Arvin is not a common American name.

But I have to give my dad some credit. The name does indeed appear to have a spot in American history—or at least a spot by the highway between San Francisco and Los Angeles. The word “Arvin” can be seen clearly from the road, imprinted on a municipal water tower near Bakersfield, in Kern County. For years friends have taken snapshots of it on their cellphones to send to me.

A few summers ago, I decided to ride my motorcycle down to Arvin. Maybe, I thought, going to the town could help me clear up some of my feelings about my name.

It was past noon when I rolled into town, the midday sun beating down stronger than I was expecting. My plan was to take a seven-stop walking tour I’d found on Arvin’s website. A sign on Bear Mountain Boulevard, the town’s main drag, greeted me: “Welcome to the City of Arvin.” The strip, about a mile long, was populated with fast food joints and squat buildings with Spanish signs in the windows. On either end was more farmland.

Unlike me, the town seemed to have no shortage of pride in its name. There was Arvin Doughnuts, which was conveniently located a short walk from Arvin Family Dentistry and Arvin Dialysis. Across the street was Arvin Auto. Never before had I seen my name so prominently exhibited. It was like seeing your name on Broadway, if Broadway was in the middle of nowhere and you’d never heard of it.

I didn’t see a Starbucks, but I wondered if they would screw up my order the way others did:

“Bitterness with two pumps of self-loathing for Arwyn!”

Arvin, established in 1910, was named after George Arvin Richardson, a storekeeper who’d settled there when the land was little more than sagebrush and rabbits. (The name Arvin, several baby-name websites say, has Germanic origins.) The area’s biggest claim to fame might be the Arvin Federal Government Camp, built in 1936. It housed migrants from Oklahoma and the greater Southwest seeking refuge amidst the ruin of the Great Depression. Author John Steinbeck included the camp in his novel The Grapes of Wrath—although in the book it’s known as “Weedpatch Camp.” Not a terribly flattering nickname.

Arvin prides itself now on its “quiet residential areas, clean streets, low crime rate, a first-class fire station, and a well-kept City Hall,” according to its website. The town is 93 percent Latino, including a significant number of field workers who earned their livings picking potatoes, carrots, grapes, peaches, and plums in the farms surrounding town.

But newspaper reports paint a picture of a small town with big issues. Arvin landed on USA Today’s “Worst Cities To Live in America” list, which cited poverty, violent crime, and “not…much to offer in the way of cultural or entertainment options.” On top of that, the city has a scourge of toxic smog that regularly floats in from across the mountains, and had a water supply contaminated with arsenic (an issue that was recently resolved). In 2017 many residents, one news site reported, were afraid to leave their homes due to a national crackdown on immigration.

I parked my bike and after stripping off my helmet and motorcycle jacket, headed to the first stop on the walking tour, the Arvin Visitor’s Center and Museum. The visitor center door was locked, even though a sign indicated that the building should be open. I knocked and waited a minute, but nobody answered. I circled the building to see if there was an alternate entrance. There was none. So, I pulled out my phone, found a number for the center, and dialed it. A woman picked up. The center, I learned, was closed because it was run by volunteers.

“We’re all senior citizens, you know,” I recall her saying. “We can’t be there all the time. A lot of us are dying off.”

I wasn’t sure what else to say, so I said the only thing I could think of: “My name is Arvin.”

“Excuse me?” the woman asked.

“My name is Arvin. Like, you know… here,” I said. “I’m a writer. That’s why I came. I thought it’d be interesting to go to a place that has my name. I thought that maybe I’d learn something about myself.”

Unable to access the visitor’s center, I headed for the next stop, Garden in the Sun Park, a quarter-mile away. The park, the walking tour map informed me, hosts farmers markets and events and is “largely seen as the heart of Arvin’s new downtown.”

When I was growing up I loved books with protagonists named Joe, Frank, or Henry. Sometimes in school we were made to read stories whose protagonists had weird names, like Won-a-pa-lei or Esperanza.

The heart of downtown turned out to be a scrubby field with picnic tables and playground equipment. The only noise I heard was what sounded like a Spanish version of “Peggy Sue” floating over from some houses across the way. There was a group of teenagers sitting at one of the picnic tables, giggling. For a moment I imagined their laughter was a cruel taunt—that they’d seen me and figured out my name.

When I was growing up I loved books with protagonists named Joe, Frank, or Henry. Sometimes in school we were made to read stories whose protagonists had weird names, like Won-a-pa-lei or Esperanza. I rolled my eyes at these books, with cultural references I didn’t understand, and characters I wasn’t excited about. Instead of feeling kinship, I felt repelled. I wanted normal stories, just like I wanted a normal name.

In a 1962 speech Malcolm X asked: Who taught you to hate yourself?

Who indeed?  Was it the white man, as Malcolm suggested? Was it popular books, movies, and TV shows that privileged so-called “all-American” characters and stories? Was it my parents, for saddling me with an uncommon name?

Whatever the case, Arvin, California didn’t seem to hate itself. In fact, it seemed downright pleased with itself—and, as its walking tour indicated, its history. As I walked toward the next stop on the tour, Arvin’s first post office, I saw two women on a front lawn. They were pulling clothes out of garbage bags and hanging them on a rack for a yard sale.

One of the women was a farm worker, and the other was retired. Next to the retired woman, whose name was Lourdes, I noticed a bicycle with a small American flag draped over a wire basket. Lourdes was from Mexico, she told me in Spanish as her friend translated. She’d lived in Arvin for 10 years and previously in Los Angeles. In Arvin she’d worked at a laundromat and furniture store, and did odd jobs like selling tamales.

“When I was little I always had a dream that someday I’d come to California,” she said. “It was exactly what I dreamed: a lot of jobs and a lot of opportunities.”

For this reason she loved the American flag. “If you’re living in a country, you have to stand behind it,” she proclaimed.

An Arvin resident filled with pride. Imagine that.

As I moved on, I couldn’t help but think that whoever planned this walking tour should have also included a packing list: snacks, sunscreen, an IV. I hadn’t brought a water bottle and felt dehydration setting in by the time I arrived at my next destination. There was a row of houses with patchy brown lawns on one side of the street, and on the other an elementary school. On the corner was a school crossing guard sitting under an umbrella. I asked her if she happened to know where Arvin’s first post office was, and she gestured at a blue house with a chain-link fence surrounding it. I walked over and discovered behind the fence—on the resident’s lawn—a squat, three-foot-tall monument.

Peering through the fence’s metal links I read: “The name ‘Arvin’ was selected for the post office by the U.S. Post Office Dept. from a list submitted by Mrs. Heard,” the town’s first postmaster.

In 1914, a resident named Birdie Heard (speaking of weird names) petitioned the federal government for the addition of a post office. The proposed names included Bear Mountain, Walnut, and Arvin. Officials in Washington, D.C. chose Arvin, as it was the only name that wasn’t already taken in California. The name was kept for the city when it incorporated in 1960.

Stricken by the heat, I slumped down onto the curb and checked the walking tour map. The next stop was a two-for-one: the Arvin Community Center—home to the Boys & Girl Club—and a place called Smothermon Park.  There were three more stops after that. But I didn’t have the heart, or the energy, to go on. I’d seen enough.

Had I learned anything, apart from the importance of planning ahead?

I thought back to Lourdes’ flag. I thought back to the acres of fields I’d passed on my way into town. I thought about the heat, and people who spent all day working in it, and the new immigrants—the ones from Mexico, not the Midwest. I thought about the town’s walking tour, its visitor’s center, the volunteers who, at least sometimes, commit to passing on a little bit of Arvin’s history. Perhaps, despite the small town’s big issues, there was something quintessentially American about Arvin. Here, in this town named after a white man, was a new group of settlers in search of opportunity.

Maybe it wasn’t such a bad town to share a name with.

I returned to my bike and reluctantly tugged on my hot motorcycle jacket and gloves, ready to hit the highway for Los Angeles. Back on Bear Mountain Boulevard I pulled into a coffee shop I’d seen earlier. The door was open, but inside there were no tables. The walls were half-painted and there was no merchandise. The owner and some friends were inside.

“Do you guys have drinks?” I asked.

“Sorry,” the owner said. “We closed. We’re turning the cafe into a smoke shop.” Nobody wanted to buy premium coffee when they could get it for a buck at McDonalds.

I told the men what I’d told everyone else I’d met so far: My name was Arvin, and I was in town to see if I could learn anything about myself.

They considered it for a moment.

“It has your name,” someone finally said, “but it’s nothing to brag about.”