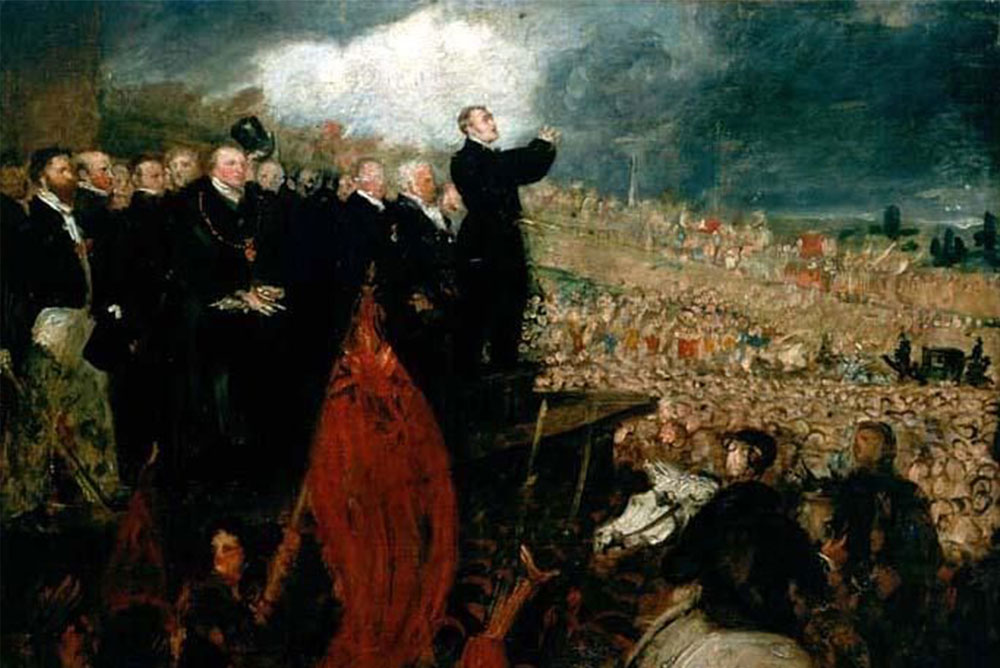 "Meeting of the Birmingham Political Union" by Benjamin Haydon (oil painting, circa 1832). Courtesy of Wikimedia Commons.

The legislature had ground to a standstill on countless issues of national import. Special-interest dark money poured freely into the legislative process, and the public could never be sure whose interests were being served. Over a generation, as often-corrupt representatives from rural areas with shrinking populations found their power growing disproportionately to the rest of the country, everyday people became increasingly outraged at their lack of voice in government, taking to the streets and threatening to topple the system.

Such was the dangerous state of affairs in Great Britain nearly two centuries ago, when that nation veered as close as it ever has come to outright revolution and a French-style overthrow of the government.

Reform-minded politicians knew they had to let some air into the system or the entire country would explode. So, the Parliament—through brinksmanship and arm-twisting, over the strenuous objection of aristocrats—passed the landmark Representation of the People Act of 1832.

The law’s primary purpose was redrawing the gerrymandered districts of Parliament, which still conformed to boundaries determined in the 12th century when the institution was in its infancy. Parliament had been born of arguments over taxes between rural strongmen and King Henry III that the reforms of the Magna Carta hadn’t been able to completely soothe. The balance of power between the crown and the nobles was evened out with a roving council that took its name from the Norman word parler—“to talk.”

King Edward I made this legislature more formal a century later by designating two knights and two citizens from every major population center to confer with him on matters of state. The biggest arguments, of course, concerned taxes and how much should be raised at any given time to support various wars against regional neighbors. The citizens’ group eventually won the right to elect members of its own, which became the beginnings of the House of Commons and the Western tradition of a bicameral legislature.

England changed in the centuries after the Parliament began, but the legislative districts did not. They conformed to the kingdom’s historic counties—Devon, Yorkshire, Cornwall, Essex and the like—without taking drastic population shifts into account. The lines remained static for six centuries even as demographic change rippled through the British Isles. Parliament entered the 19th century in a dangerously unrepresentative state.

The Industrial Revolution made this problem a crisis, as new cities like Manchester and Birmingham blew up with former countryside residents jammed into urban hovels without any representation or protection. The vote was restricted to property owners, defined as those who owned a home with a kitchen hearth. The saying went: If you could boil—or “wallop,” in British parlance—a pot of water in your own house, then you could cast a ballot. (The term “potwalloper” became another word for voter.) This restriction helped keep those on church relief—especially poor Irish Catholics—from voting.

One particularly galling act of an out-of-touch Parliament was the Corn Laws of 1815. This tariff on imported food was meant to protect the incomes of gentlemen farmers—often titled nobles—who sold their harvest to domestic markets at inflated prices. Riots quickly broke out over the rising price of bread; famine-like conditions among the poor accompanied bad harvests.

The law’s primary purpose was redrawing the gerrymandered districts of Parliament, which still conformed to boundaries determined in the 12th century when the institution was in its infancy.

But Parliament was in the hands of the wealthy, especially a bloc called “The West India interest” who had investments in the sugar plantations of the Caribbean and were dedicated to the preservation of Black slavery. The high tariffs on wheat didn’t bother them, and many of those who owned estates in both hemispheres became even richer.

Though colonies like Jamaica and Barbados officially had no seats in Parliament, their local grandees were able to game their way in because of the ancient legislative maps. They also exploited an 1800 law that created a dual borough system of representation, which allowed for two members of Parliament from every borough, no matter how few people lived there. Abandoned medieval towns with almost no residents still could send two representatives to London. One was a hilltop cathedral that had collapsed in the 13th century. Another was a ruined port city almost completely underwater.

This created profound inequality. A bare handful of people from rotten boroughs sent 112 dupes, puppets, and aristocrats to the House of Commons every year. Nobody could ever be sure who paid for a seat; it was the 19th century version of dark money. Abolitionists like William Wilberforce cursed the West Indian interest. As long as it remained intact, slavery would persist.

As a result, the English working classes began to sympathize with enslaved people in the Caribbean—victims of the same heavy hand that was pressing British industrial workers deeper into abject poverty. Radical speakers attracted crowds; at one such gathering at St. Peter’s Field in Manchester, a militia charged into the crowd to break it up, hacking at bystanders with sabers and killing 18 people. The carnage became a major scandal and raised the national temperature. It also called attention to the extreme unhappiness with Parliament among city dwellers.

Then, in the elections of 1830, the reformist Whigs gained a shaky majority, their overwhelming popularity slopping even over the high gunwales of gerrymandered district lines. When the House of Lords blocked three successive bills to add seats to Parliament, more rioters took to the streets and citizens’ committees started to talk of the most un-British of subjects: revolution. The Birmingham Political Union boasted of two million citizens ready “to recover the liberty, the happiness, and the prosperity of the country.”

The government—even the monarchy—seemed on the brink, unless a valve could be found to release the pressure. Historians have given this period the cinematic name “Days of May.” On May 10, 1832, the Whig prime minister Charles Grey, the 2nd Earl Grey, resigned after the failure of the third bill to expand Parliament and was replaced by Arthur Wellesley, the 1st Duke of Wellington, a famously tone-deaf politician. He reiterated his support for the status quo, and commoners erupted. Plans for street barricades similar to the Paris Commune were passed around; reform activists readied themselves for combat and office takeovers. The wife of King William IV told her friends that she hoped she would conduct herself like a lady when she was executed.

In a panic, the king reappointed Grey, who muscled a successful bill through both houses that redrew district lines and added Parliament seats. The radicals turned their energies toward petitions and electoral campaigns, demanding pledges of slavery abolition from candidates and formulating slates of those who seemed most likely to beat the borough-jobbers and their shills. In the next set of elections (with results clear by January 8, 1833), the Whigs captured 70 percent of seats and the West Indian interest was permanently hobbled.

That same year, a reformed and reinvigorated Parliament passed the Slave Emancipation Act, setting 800,000 people on a path to freedom. The legislature also approved the Factory Act, which banned the employment of children under the age of nine.

Britain’s path to a more representative government offers lessons to nations with sclerotic legislatures that have lost the confidence of their people. The best solutions in such circumstances are to crack open the locked box of ancient customs and minoritarian rule, to expand representation in the legislative branch, and to reduce the built-in influence of big money interests. Doing so saved British democracy from collapse in the 1830s, and steered its path to an expansion of liberty.