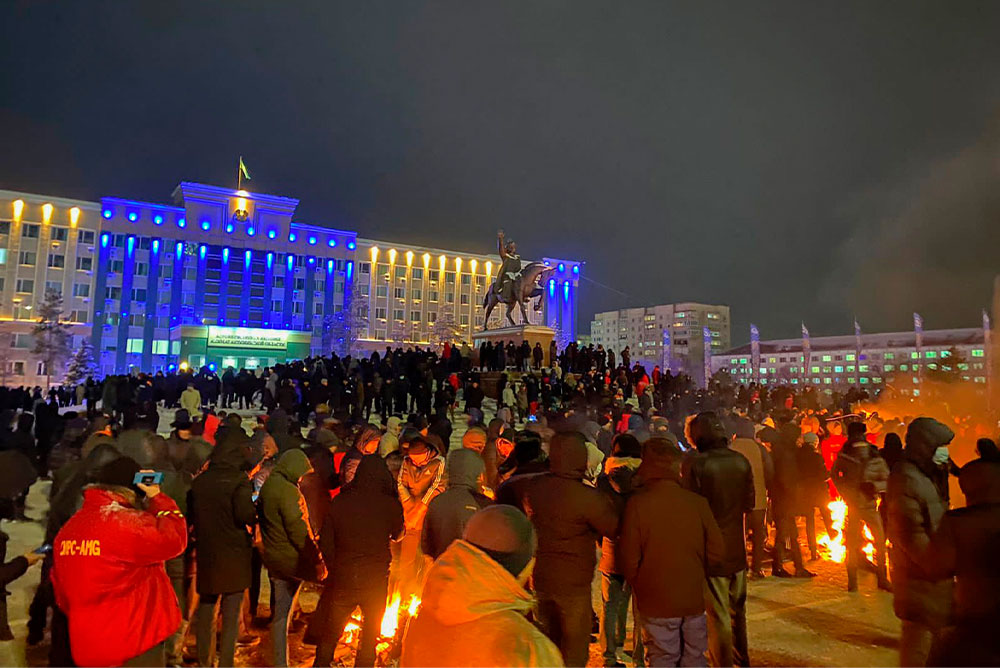 Protestors in the city of Aktobe, Kazakhstan, on January 4, 2022. Courtesy of Wikimedia Commons/Esetok (CC BY-SA 4.0).

This was no ordinary internet blackout. For five days, the ninth largest country in the world was a black box.

On the evening of January 5, 2022, we set our respective alarms for 5:30 a.m. We wanted to get the earliest possible updates from our colleagues in Kazakhstan, who had been chronicling three days of demonstrations as they spread from the western oil-producing city of Zhanaozen to other urban centers across the Central Asian nation. Early morning on the East Coast was already late afternoon in Kazakhstan, yet when we woke up, nothing seemed to have changed. Our friends’ Instagram stories were 12 hours old; the single checkmarks next to our WhatsApp and Telegram messages to activists and journalists we know signaled that they hadn’t been delivered. A sinking feeling of worry set in.

We’d seen communication disruptions before. Kazakhstan’s authoritarian government frequently jams up the 3G network in cities where protests are planned and target-blocks social media platforms. (Even SoundCloud has been banned there since 2018.) But in June 2019, when some of the largest protests in the past decade followed the election of current president Kassym-Jomart Tokayev—a former prime minister, state secretary, and chair of the senate who had been handpicked to replace Kazakhstan’s longtime dictator Nursultan Nazarbayev—activists and journalists wiggled around internet restrictions with VPNs to post Instagram stories, share updates on Telegram, and livestream mass detentions on Facebook within just a couple of hours.

What made this blackout different was the deafening silence and the duration: We knew all but nothing of our friends and colleagues from the afternoon of January 5 until the morning of January 10.

We had been following Kazakhstan even more closely than usual since January 2, when several dozen drivers took to the streets of Zhanaozen to protest a steep jump in the price of liquified petroleum gas. But while fuel prices may have been the immediate trigger, the demands of what soon became country-wide protests reflect long-seated anger with corruption, economic inequality and stagnation, and lack of civil rights.

For 30 years, Kazakhstan’s political elite have hacked away at civil liberties and political opposition. Nazarbayev, who ruled Kazakhstan from its 1991 independence from the Soviet Union until 2019, outlawed most forms of political protest, gutted the independent media, and oversaw several rigged and opaque elections. Despite promises of stability and middle-class life in exchange for his authoritarianism, Nazarbayev and his allies lined their pockets with the country’s vast natural resource wealth and laundered it in the West, leaving ordinary citizens in the grips of economic stagnation.

Still, many social scientists and regional analysts have argued that Kazakhstan’s supposedly apolitical population would never push back against the regime. A 2016 nationwide survey showed that young Kazakhstanis were not interested in engaging in politics, and a 2019 report by Central Asia analyst Daniyar Kosnazarov found rising engagement among millennials but pointed to socio-economic problems translating into political passivity.

What made this blackout different was the deafening silence and the duration: we knew all but nothing of our friends and colleagues from the afternoon of January 5 until the morning of January 10.

Those brave few who try to push back face retaliation. In 2011, security forces opened fire on oil workers in Zhanaozen who had been on strike for seven months demanding better working conditions. In 2016, when protesters gathered in the nearby oil hub of Atyrau to protest land reforms, veteran activist Maks Bokayev was jailed for five years and banned from further political organizing.

Despite it all, Kazakhstanis rose up at the start of 2022—and their country plunged into informational darkness. During the blackout, those of us who tried to make sense of what was happening had to rely largely on the reporting of mostly Russian news outlets, which had been given access to help the Kazakh government control the narrative surrounding the events. Foreign journalists were turned away at the border; the website of Vlast, one of Kazakhstan’s few independent media outlets, was inaccessible from abroad, though its reporters continued to post updates on the publication’s Twitter account, accessed through a patchy network of proxy servers. Early reports published in mainstream Western media largely cited statements from the president’s website, and even some Kazakhstani outlets were stuck linking to reporting done by Russian media.

This brief reliance on Russian media—and on pure speculation—opened up a Pandora’s box of dis- and misinformation. Unconfirmed reports have suggested everything from the protests being co-opted by the members of Kazakhstan’s organized crime groups to the country’s elite evacuating the country in private planes. This is exactly what makes the blackouts such an effective—and oppressive—tool: by restricting the spread of information, the regime creates a dependence on its narrative of events while sowing confusion to mask its own use of force against citizens.

Of course, Kazakhstan is no stranger to dis- and misinformation. Most media in the country are essentially megaphones for government propaganda. To defang the opposition and the shrinking independent media, the country’s regime has even created several pseudo-oppositional media channels such as Azattyq Ruhy, which mimics oppositional material but is actually pro-government.

Nonetheless, some basic facts about the past week are clear. Legitimate long-standing grievances prompted largely peaceful protests. But things turned violent in Almaty, Kazakhstan’s largest city and the site of the biggest protests, leading to the burning of city hall, hundreds of businesses looted, and at least 100 people—including two children—dead. The rest requires educated guesswork.

President Tokayev is seemingly struggling to manage multiple threats to his regime’s survival: both from the protestors and from infighting among government officials vying for power. He has resorted to drastic measures in response to both threats, reshuffling the country’s security apparatus and building a false narrative around foreign terrorism. He marshalled this narrative to request troops from the Collective Security Treaty Organization (CSTO)—a military alliance between Russia, Belarus, Kazakhstan, Kyrgyzstan, Tajikistan, and Armenia that had never sent a peacekeeping mission in its 30-year history. On January 6, 3,000 CSTO troops—inappropriately donning UN peacekeeper helmets—descended on Almaty.

In a January 7 speech, Tokayev doubled down on the terrorist narrative, conflating civil rights activists with terrorists and accusing both of undermining the country’s stability. In a now deleted English-language Twitter thread, he promised “no talks with the terrorists, we must kill them.” As if just to make things more incoherent, during a January 10 virtual meeting with other CSTO state leaders, Tokayev further alleged that the terrorists had broken into morgues to steal the bodies of their dead comrades, in order to leave no evidence of their involvement.

The way that Kazakhstanis synthesize and interpret the trajectory of recent events will have important consequences for political reform advocates. As a political scientist and a journalist, we’re wondering about the macro-scale effects: Does this week’s unrest signal a political opportunity for reform and democratization or harsher repression and dictatorship? How will civic movements navigate a traumatized public to continue to advocate for change?

Answers to these questions are important. But rampant misinformation and days-long internet blackouts carry different questions on a personal level. Did our friends who went to Almaty’s central Republic Square make it home safely? Have police shown up at their doors? Did my colleague’s friend manage to find a ride to the hospital when she went into labor during curfew?

We haven’t yet answered all of these questions, although most of our friends and colleagues seem to be safe; they’re relieved to have a few hours of internet access a day. In Almaty, ATMs are starting to work again, and clinics are offering to treat those who were injured during the unrest for free. But while the government has already assessed the economic damage of the protests, there’s still no official information about how many people did not make it home. While Kazakhstan may no longer be a black box, transparency and political representation remain elusive.