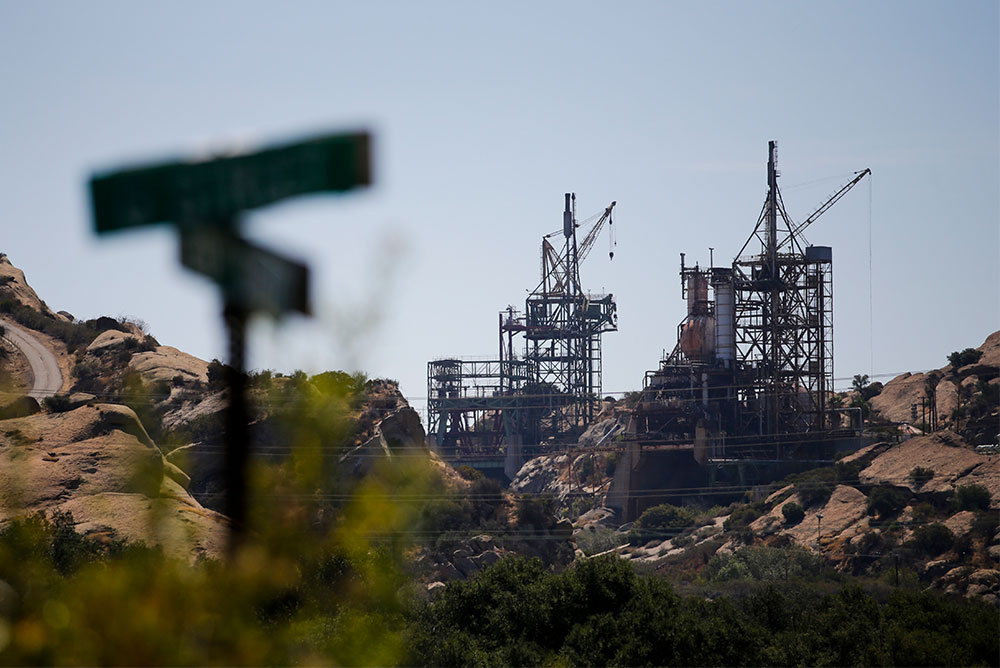 
In 1979, the year of Three Mile Island, I exposed another nuclear accident—another partial meltdown—in the Los Angeles metropolitan area. It occurred at the Santa Susana Field Lab, a reactor and rocket-testing facility in the mountains between the San Fernando and Simi Valleys.

Back then, the story was both news and history. The Field Lab opened in 1947, at the onset of the Cold War, and the reactor accident happened in 1959. The Atomic Energy Commission (AEC) and a nuclear contractor kept it secret for 20 years, but there was no denying the evidence we revealed on local TV, discovered in AEC archives by the watchdog group Committee to Bridge the Gap.

Today, that accident is still news, as Gov. Gavin Newsom appears to be backing away from enforcing a cleanup of nuclear contamination that remains on the site. Sixty-three years since the accident, Santa Susana should remind us of the perils not only of nuclear materials but also of our short memories. This story’s hardest lesson is that when dangerous secrets get buried you often have to keep excavating them, over and over.

In 1979, we showed pictures of broken fuel rods on the bottom of the reactor core.  Documents reported that the heat measured 1465 degrees Fahrenheit and was thought to be even higher. Splitting uranium atoms had melted both the fuel and the metal cladding, and highly radioactive gases were being released. It was an accident that wasn’t supposed to happen, and it continued for 10 days until engineers finally shut the reactor down. New equipment, including special cameras had to be developed to remove the melted fuel, and the video has been used to train nuclear plant operators for the future.

But, despite our revelations, the secrecy and denial continued. I was allowed onto the site and given a tour of the reactor building, which was being torn down. But when I asked about radioactive emissions, an executive for the Rocketdyne subsidiary Atomics International told me, on camera: “The potential hazard of major release into the environment was just not there.”

That was a flat out lie.

The Field Lab’s experimental reactor had no containment structure like the big domes at Three Mile Island. While it was out of control, radiation levels went off the scale and doors had to be opened for worker protection. Clouds of highly radioactive gases and particulates were released.

There were also three other accidents at the Field Lab’s 10 nuclear reactors. In addition, the Field Lab conducted some 30,000 tests of rockets for NASA and for military ballistic missiles before it closed down in 2006. Throughout the period, operators illegally burned radioactive waste and toxic rocket-fuel in open-air pits.

Over the years, residential development moved closer to the Field Lab, but no one ever told the public about the release of radioactive contamination which would remain dangerous for thousands of years. In 1989, a local newspaper reported on secret government studies showing extensive contamination at the site. That drew attention from unsuspecting homeowners, and a community group called the Rocketdyne Cleanup Coalition sprang up to oppose re-licensing of site facilities. Nuclear operations at Santa Susana finally halted in 1990.

But there was still no cleanup—even after UCLA’s School of Public Health, in 1997, found increased death rates of Field Lab workers due to radiosensitive cancers. Federally funded studies in 2006 and 2007 showed migration of contaminants into surrounding neighborhoods and an elevated incidence of key cancers in the community.

In 2007 and 2010, Gov. Arnold Schwarzenegger’s office of Environmental Protection (CalEPA) negotiated agreements with NASA, the Department of Energy, and Boeing (which had bought Rocketdyne and inherited its liabilities) to conduct a full cleanup. The deadline for completion was 2017, during Gov. Jerry Brown’s administration. But there was still no cleanup, and remediation still hasn’t started—even though the federal Environmental Protection Agency reported widespread nuclear contamination in 2012.

Today, despite the agreements they entered into, NASA, the DOE, and Boeing have failed to carry them out, contending there’s little danger and claiming that full cleanup is too complex and expensive. But community outrage is building.

It was an accident that wasn’t supposed to happen, and it continued for 10 days until engineers finally shut the reactor down.

In 2014 four-year-old Grace Bumstead of West Hills, a neighborhood close to the Field Lab, developed a rare and aggressive form of leukemia. At Children’s Hospital, her mother, Melissa, met other parents whose children had rare cancers, too. Some of their kids died; the survivors will have health problems for the rest of their lives.

When the parents compared notes, it turned out that several of the pediatric cancer patients lived in the vicinity of the Field Lab, and since then more cases have emerged in the area. There are 14 with brain cancer in Simi Valley alone. Melissa Bumstead told me: “We kept meeting other families who lived near us and because childhood cancers are so incredibly rare, statistically, that’s not supposed to happen… so we started to wonder if there could be an environmental connection. That was actually the first time that I had heard of the Santa Susana Field Lab.”

How solid is the connection? Of course, it can’t be proven that a particular cancer came from the Field Lab, but the cancer-causing radioactivity and toxic chemicals that will continue to migrate off site are clearly a risk until it’s finally cleaned up.

Dan Hirsch heads the Committee to Bridge the Gap, which found the evidence of the meltdown in 1979.  Now retired as director of the Program on Environmental and Nuclear Policy at UC Santa Cruz, he is co-chair of the Santa Susana Field Lab Oversight Panel established by the state Legislature. He dug into risk assessments at the site submitted to the state by Boeing, which is now lobbying for a more limited cleanup than required by the agreements it signed on to.

Buried deep in more than 1000 pages, are estimates of contamination that L.A. County Supervisor Sheila Kuehl found “very disturbing.” She wrote to the California Department of Toxic Substances Control (DTSC), citing Boeing’s own estimate that, “The risk after such proposed minimal cleanup would remain so high that every fifth person would most likely get cancer from the remaining contamination.” Kuehl calls that “mind-boggling” when “site cleanups generally aim for one in a million.” She concedes that no one would be living on the site but, “Our constituents live nearby where they can also be exposed.”

When Grace Bumstead developed leukemia a second time in 2017, she required a bone marrow transplant. Her mother Melissa organized Parents Against the Santa Susana Field Lab, started circulating a petition demanding enforcement of the cleanup agreement, and began tirelessly lobbying agencies at the local, state and federal levels.

In 2018, there was a new motivator of public outrage: the massive Woolsey Fire, which started 1000 yards from where the Field Lab reactor suffered the partial meltdown and which spread over 96,000 acres. The state agency responsible for enforcing the cleanup agreement, CalEPA’s DTSC, at first denied that the fire spread any nuclear fallout. But peer-reviewed scientific data later revealed that houses in Thousand Oaks and other cities were dusted by the Field Lab’s radioactive contamination in the smoke of the Woolsey Fire.

By 2020, Bumstead’s effort seemed to be bearing fruit. Jared Blumenfeld, Newsom’s CalEPA Secretary, talked tough in a speech to the Santa Susana Work Group, created in 1990 for state agencies to report to the public about the Field Lab. Blumenfeld deplored the delay in enforcing the cleanup, said Governor Newsom was “focused on action,” and that the DTSC would not give an inch when it came to holding polluters responsible for making things right. “Our job is to regulate, not to negotiate,” he said.

So what happened next?  Last year, DTSC did almost the exact opposite, making an explicit “offer to enter into nonbinding confidential mediation with Boeing” [italics mine]. The mayors of four cities, supervisors from both Los Angeles and Ventura counties, four members of Congress and U.S. Senator Alex Padilla have all since written to CalEPA Secretary Blumenfeld, advocating vigorous enforcement of the cleanup and asking why it’s still being delayed.

Why, when so many secrets have spilled out since 1979, when health risks appear so obvious—when Blumenfeld has spoken so strongly—would his DTSC defy its own legal enforcement obligations?

Blumenfeld has not returned calls from reporters. Hirsch chalks it up to “regulatory capture,” a situation that’s all too common, when agencies advance the interests of commercial enterprises instead of regulating them in the public’s interest.

More than 700,000 people now live within 10 miles of the Lab. This year Gov. Newsom will be up for re-election. Will his administration renew the commitment to enforce the cleanup? Or, will there be a deal that lets Boeing, NASA and DOE walk away from what Blumenfeld called their “legally binding” agreements to remove a continuing threat to public health and safety?

In the meantime, around Santa Susana, the pollution remains, and the human suffering continues. MSNBC recently aired In the Dark of the Valley, an extensive documentary about the Field Lab accident and the consequences for the Bumsteads and other families. Ever since, Bumstead says she’s been “flooded with messages about whole families who had cancer growing up here, and they thought it was just their family.”

Her petition has gone nationwide, and the number of signatures is now more than 750,000.