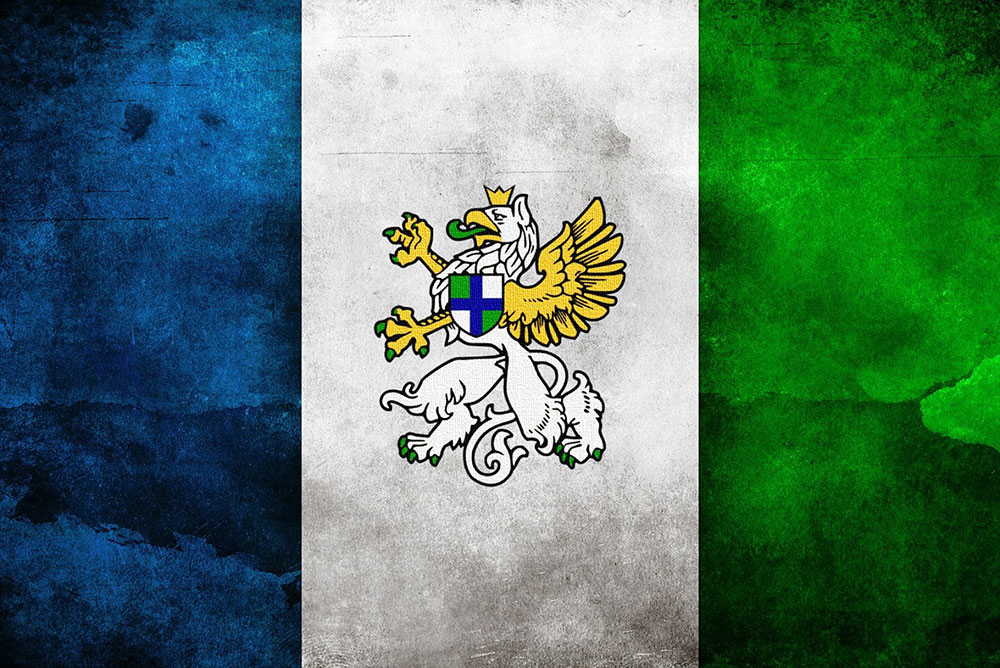 The flag of the invented realm created by the author's late friend Jesús. Photo courtesy the author.

Last year, my friend Jesús passed away when he was hit by a car while riding his bike. He was one year older than me. We both had been college professors in Venezuela, where we developed a friendship over our shared humanities-focused geekery. Jesús was also the only other person I knew at the time who had constructed a world inside his mind as a hobby. When Jesús was buried, his casket was draped with the blue, white, and green of his make-believe country’s flag. As far as I know, what remains of the history of his imagined realm lies within some private Facebook conversations that I haven’t had the strength to go through.

I recently learned that the world-making activity Jesús and I shared is known as paracosm. According to a study cited by the Wall Street Journal, about 17 percent of children tend to develop a detailed personal universe that they outgrow later in life, not unlike an imaginary friend. Nonetheless, while a make-believe friend might be a companion, the imaginary world is more about the joy of discovery and curiosity, from conjuring a forest in your mind and wondering what creatures are lurking over the next hill to dreaming up a city far more exciting than the one you live in and wondering who lives there, what drives their lives, if they love someone, or if they are happy. Before you know it, you’re doodling wondrous beasts and crude maps, trying to make sense of the world inside your head.

Interestingly enough, the kids who developed a paracosm didn’t score any better than their peers in terms of intelligence, vocabulary, memory, or creativity. The only reported major difference from other children was that those who created paracosms showed having more problems at filtering out irrelevant thoughts.

Some famous writers who have mentioned making paracosms in their youth are Stanislaw Lem, Oxford don C.S. Lewis—with the help of his brother Warren—and Charlotte, Emily and Anne Brontë (with the help of their brother Branwell). Some of these unreal realms, unsurprisingly, were influenced by the children’s perspectives on the adult world that surrounded them. In a 1984 essay, Lem points out the irony of how he amused himself as a child in interwar Poland by creating fictitious passports, permits, and government memos only to have his family survive the Nazi takeover with the aid of forged documents. He wonders if these games were a reflection of “some unconscious sense of danger.”

The imaginary worlds of the two sets of siblings, meanwhile, mirrors the British culture, politics, attitudes, and imperialism of the time: The Brontës’ world of Glass Town was set in an imaginary West Africa (later moved to the Pacific Ocean) with characters based on British explorers, Napoleon, and the Duke of Wellington. The sisters’ earliest writings are the extensive correspondence and poems of the inhabitants of Glass Town. The Lewis’s world, Boxen, was born out of Warren’s tales about India and his more famous brother’s love of stories involving talking animals, such as The Tale of Peter Rabbit.

My own paracosm started when I was a weird, curious, and somewhat lonely tween growing up in Maracay, a mid-sized city in Venezuela, in the early 2000s. My source of fascination was not India or Africa, but the United States. Or at least a distorted version filled with everything I found mesmerizing about a place I only knew through media. The setting was not some hypothetical ancient era or an idealized version of the Middle Ages, but vaguely reminiscent of the mid to late 20th century—the height of the American empire, so to speak. I named this nation Urbania.

While a make-believe friend might be a companion, the imaginary world is more about the joy of discovery and curiosity, from conjuring a forest in your mind and wondering what creatures are lurking over the next hill to dreaming up a city far more exciting than the one you live in. Before you know it, you’re doodling wondrous beasts and crude maps, trying to make sense of the world inside your head.

In Urbania, there’s an equivalent city to New York and places analogous to New Orleans, California, and Texas. There are enormous cities filled with skyscrapers and subways, endless suburbs and prisons with electric chairs. There are wealthy industrialist families bound through fraternities and clubs, immigrants on crowded ocean liners looking to start a new life, and reactionary militias boiling on the fringe. There’s a colorful past that carries the sins of colonialism and endless foreign wars, which ultimately seal the country’s fate.

Characters and places, although imaginary, had names taken from all sorts of sources: Bertolt Brecht plays, classic black and white movies, Saturday Night Live cast members. When you were a middle-class tween in Venezuela in the early 2000s, you either studied a musical instrument, played sports or learned English. I did the latter and, as soon as I could, I began working on my imaginary universe in the language I’m writing these words because it felt “right.”

The adults around me, though supportive, were irked that I didn’t try to write about something closer to my own culture and reality. On one hand, I was a child of globalization. Like many millennials around the globe, I had prefabricated childhood ideas from watching The Simpsons and playing Pokémon. The very first book I read in its entirety was Harry Potter and the Philosopher’s Stone. When I was 7, I knew who Bill Clinton was but not the president of my own country.

On the other hand, I had a hard time connecting with other kids, didn’t have the best family situation, and tried to distance myself from a world that felt overwhelming. For me, Urbania offered an escape. It started out as a way to channel my creative impulses. I have always liked to tell stories. Urbania started out as a comic book, then a movie script and finally a book series with no clear beginning or end that has been started, abandoned, or lost dozens of times over 20 years. Despite working so many years on Urbania, I’ve never been able to even finish a short story set there.

However, I can’t say all those years I spent developing a universe in my head has been a waste of time. My protagonists were exploring their sexual orientation and gender performance way before I admitted to myself that I was attracted to men. Trying to flesh out my little realm of the unreal made me research history, geography, world cultures, mythology, religion, politics and linguistics, essentially turning it into a shorthand to try to understand the real world.

In my case, I started to write thanks to my paracosm, which is what eventually led me to become a journalist and to getting short stories published every now and then. There was a time when I was worried that I might pass on, like Jesús did, and felt concerned that the little scraps—the first chapters of novels that never had a follow-up, drawings of maps and flags in yellowish notebooks at my mother’s apartment—might end up as puzzle pieces for an image that was never fully completed. But now, if I never manage to publish a single word about the small world located in the back of my head I wouldn’t be upset.

Jesús, too, used his paracosm to relate to the world. He wasn’t a writer, he was a political scientist, but his life was defined by working hard and passionately on little things, always hoping something bigger and better was coming, and having an infinite love for humanity and what it has been able to achieve. That was one of the many things that made me relate to him. The make-believe country that was his own personal realm of the unreal was also an intellectual game where he could design and apply social and political ideas that appealed to him. The blue, white, and green flag he was buried with not only served as the symbol of his personal utopia, but also the banner that a better world was possible.

Talking with some friends and colleagues about my making worlds as a hobby, I realize it’s a far more common activity than I suspected for individuals with a natural passion, admiration, and curiosity about why people do what they do. Many of them aren’t writers like the Brontë sisters or Lewis. They are journalists, economists, historians, and many of them still continue to dream on. People might claim this activity is for a novel they are writing or for a tabletop game they play, but in all those cases I see the sign of the fellow traveler who enjoys more the endless journey to find out what’s over the next hill than hurrying to the purported destination.

I can’t help but think about the study cited by the Wall Street Journal and wonder: Maybe all those so-called irrelevant details that as children we were meant to filter out, really have helped us to gain a different, broader insight about the society we live in. Looking back, all that I have achieved, at least career-wise, has been indirectly derived from chronicling the rise and fall of Urbania, an imagined land that has given me so much in real life.