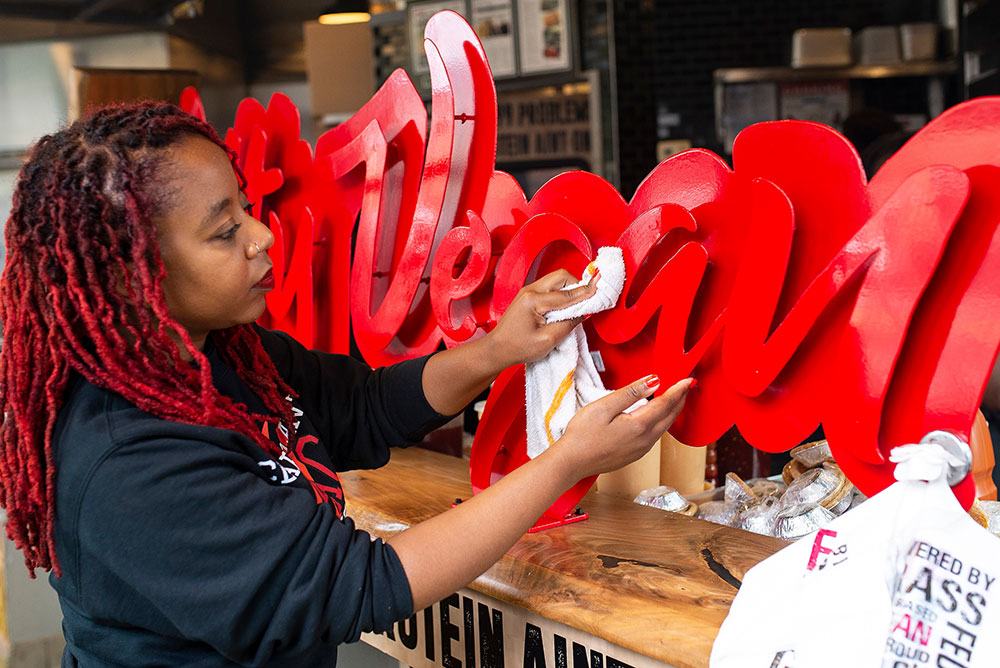 
Soul food is famously revered for pork and barbecue, for savory side dishes cooked in lard. I am a Black man who grew up loving my mother’s cornbread dressing and my aunt’s macaroni and cheese. I found comfort in these foods. Then I became a vegan. At first, I wondered, if I did not eat soul food as I had historically conceptualized it, what kind of Black person would I be? Where would I belong?

Cultural identities are baked into culinary identities. This is especially true for people of color: What you choose to eat, and not to eat, speaks volumes about where you belong. The culinary term “soul food” can be traced back to the 1960s, when Black people who moved north during the Great Migration began referring to their musical and culinary experiences as “soul music” and “soul food.” As “soul” became a linguistic signifier for Black culture, it became a self-empowering shorthand for being able to survive in a racist society, and to resist the dehumanization of Black and African culture. The roots of soul food are antiracist.

I know that not eating meat can be antiracist, too, and that veganism aligns with these self-empowering principles. Not consuming animal products resists factory farming’s dehumanizing forces and disproportionate impacts on Black people and on the Earth. But there have been moments when my evolving diet has compromised my ability to feel like part of my community—even part of my family.

For us, soul food consists of the classics so often associated with the term: fried chicken, collard greens, dirty rice, jambalaya, okra, cornbread dressing, and pretty much anything one can eat off a pig. Over the years, these foods have given me comfort. When the pervasive reality of racism knocks me off-center, the red beans and rice I grew up with is the ground from which I remember myself as beloved and belonging. For me, red beans and rice feels like home.

When I left Battle Creek, Michigan, to attend graduate school in the outskirts of Los Angeles, my family was concerned that the move would “change” me, or make me some kind of hippie. They may have been right. When I arrived in Claremont, I was your typical, grilled meat-loving omnivore. Three and a half years later I was a vegetarian, and not too long after that, I was a vegan. I grew dreadlocks and a beard.

I dreaded my first trip back home after I became a vegetarian. I knew my family would question my diet and challenge my cultural authenticity. Sure enough, my dad made a show of cooking meat to add to the beans and rice I had prepared for Christmas dinner—despite the fact that there were plenty of other meat dishes for him to choose from. My beans and rice were not authentic to our family, and he made sure everyone knew it.

Soul food is how Black people define ourselves, and celebrate the stories of how we survived. And yet, soul food’s overwhelming cultural power presents a strong argument for reexamining it.

My experience is not unique. Countless other people of color feel alienated for being vegan, even though their veganism may be rooted in a commitment to community. In America, food has long been—or been mixed up with—an engine of oppression, and the Black body serves as a constant reminder of it. Black people were enslaved because of our agricultural and culinary acumen. Economic exploitation of traditional farm and factory farm laborers, who are predominantly Black and Latinx, persists today. So does housing discrimination, which makes it hard for Black, Indigenous, and other people of color to shop for affordable fresh fruit and vegetables near their homes.

Soul food is how Black people define ourselves, and celebrate the stories of how we survived. And yet, soul food’s overwhelming cultural power presents a strong argument for reexamining it. Are the stories we tell ourselves about traditional notions of soul food still useful? Is the idea of soul food really about the food itself, or is it rooted in the wisdom of the communities that created it? How might soul food be used to tell stories about who we want to become, and not only who we once were?

I suggest that we begin by decolonizing soul food—unearthing the ways white American stereotypes around Black food and culture have shaped our understanding of the cuisine of our Black ancestors. We don’t have to look farther than Aunt Jemima and Uncle Ben—stereotypes created to normalize segregation—to see the influence of white assumptions about Black cookery. De-linking these images from our ideas about soul food helps us uncover knowledges that have always existed on the margins.

For instance, there is no static definition of what it means to eat in a way that is “Black.” In his book Hog and Hominy, culinary historian Frederick Douglass Opie writes that what Americans think of as a traditional West African diet, consisting of “darker whole grains, dark green leafy vegetables, and colorful fruits and nuts” supplemented with meat, evolved because during slavery and its aftermath, Black folk had to eat what they were able to access. They had to learn how to make inexpensive cuts of meat taste wonderful.

If we think about the history of Black food as a window into surviving the racism that is foundational to our domestic food system, we tap into deeper meanings that can easily be overlooked. We might say that what animates soul food isn’t the chicken, or the hog, or any foodstuff in and of itself—but rather a spirit of preservation and promotion of the Black community. And this realization should prompt ethical reflection and response.

I suggest that veganism, particularly Black veganism as other activists and I have described it, shows one powerful way. By opting to not consume animal products, Black veganism forces us to examine how the language of animality and “animal characteristics” has been a tool used to justify the oppression of any being who deviates, by species, race, or behavior, from white cultural norms. By challenging the racist stereotypes within these norms, Black veganism invites us to learn more about the history and development of Black food and food culture beyond the terror that was slavery, tenant farming, and picking cotton. I find parts of myself in the stories of chefs such as Hercules Posey and James Hemings, and food justice activists such as Fannie Lou Hamer.

Studying the history of African and Black culinary and agricultural acumen, in conjunction with changing my diet, gave me the confidence I needed to lean into my Black as well as my vegan identity. And I think it helped my family along, too. Discussions about the way we eat provided an opportunity for my family to remember the stories of our ancestors. Over dinner, we talked more about the foods of my grandfather’s childhood in Mississippi—rice, beans, vegetables, stews, eggs, and occasionally meat. We also learned that one reason he worked on farms, despite the abuse he faced, was to decrease his own food insecurity.

These stories offered us more than any of us could have imagined. Telling and retelling these stories allows Black people to understand our food within the context of our own histories—and to continue to ensure that our dietary changes preserve and promote the communities we come from.