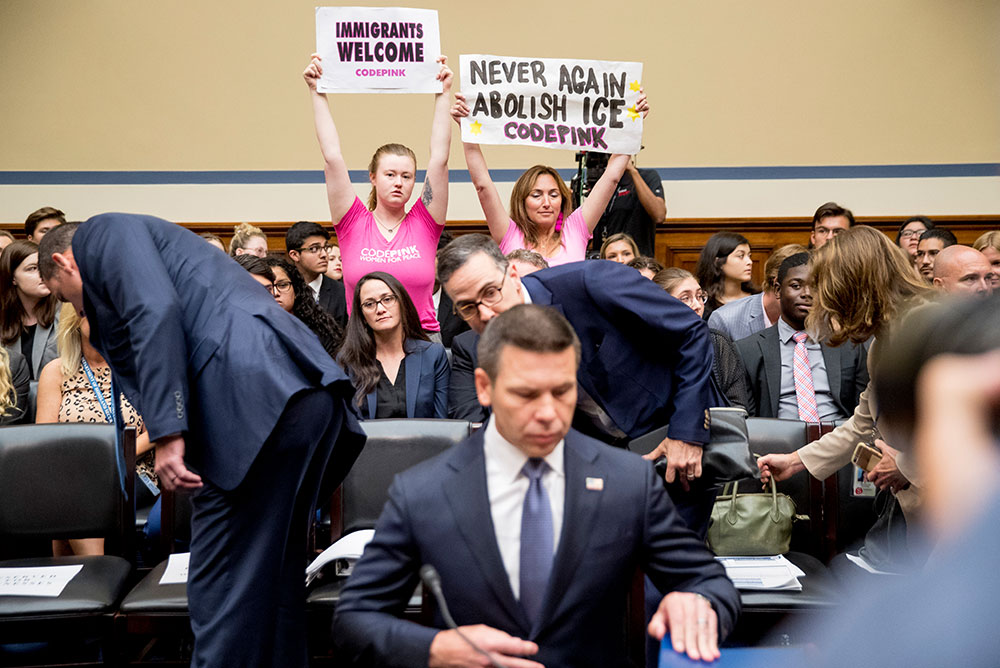 Activists with Code Pink hold up signs as Acting Secretary of Homeland Security Kevin McAleenan arrives to testify before a House Committee on Oversight and Reform hearing on Capitol Hill in Washington. Courtesy of AP Images.

Borders are meant to create order and security. But around the world, authoritarians seeking to enhance their power are pushing dangerous border narratives to sow chaos and exploit insecurity. Democratic societies have failed to understand how these narratives are weaponized, putting migrants in harm’s way and our way of life at risk.

How can we counter the fear-based migration narratives that dominate our political and cultural discourse? What sort of story can answer narratives that—to quote a new report from the Migration Policy Institute, RAND Corporation, the Metropolitan Group, and the National Immigration Forum (where I am president and CEO)—“are driven by insecurity”?

The short answer lies in developing stories that confront fear and insecurity by showing, in detail, how more inclusive immigration policies actually benefit all of us, and make entire nations more secure. But this requires reckoning with the reality that, as the report notes, “negative narratives are particularly sticky, even when they are not firmly rooted in evidence.”

In other words, authoritarians don’t have to worry about the truth; they just need to tap into fear. And migration, already mysterious and foreign to many, is the perfect foil.

In 2015, as Europe scrambled to resettle Syrian refugees, Hungarian Prime Minister Viktor Orbán created the contemporary blueprint for authoritarians seeking to exploit migration fears. With his political fortunes flagging, Orbán fashioned an anti-immigrant narrative that viscerally othered migrants. Syrian refugees, he wrote, “have been raised in another religion, and represent a radically different culture. Most of them are not Christians, but Muslims.”

Less than four years later, Orbán sat beside President Trump in the Oval Office, who praised this aspect of Orbán’s leadership. “You have been great with respect to Christian communities, you have really put a block up,” said Trump. “And we appreciate that very much.” Trump’s own migration narratives similarly exploited religious and racial fears that galvanized his supporters—and were difficult for his opponents to push back against.

The study illustrates why. Researchers found that democratic lawmakers seeking a more constructive approach to migration often spread messages about the benefits of immigrants and immigration. But these top-down, elite-driven narratives “do not always align with people’s lived experiences”—and instead lead to a skepticism that fits neatly into a large segment of the public’s “fundamental mistrust of government.”

The Biden administration’s approach to border security illustrates the challenge.

For much of 2021, Biden officials outlined a series of thoughtful policies designed to address root causes of migration from Central America, add additional processing resources and infrastructure at the southern border, and speak to how Trump’s “cruel” border security measures would be reversed.

I understand the desire by many advocates to avoid talking about security, which might be seen as endorsing a frame set by opponents of immigration. But Americans across the political spectrum want a border that is both humane and secure.

The administration’s narrative focused on policy shifts where the federal government played the hero—doing the right thing, treating migrants the right way. Policy wonks and immigrant rights advocates across the country rejoiced.

But there were few stories about how these policy changes would benefit the American public. The idea that these new policies would make America more secure was buried deep. In fact, the administration rarely used the word “security” when talking about the border.

Opponents of immigration stepped into the vacuum. They harnessed Americans’ perception of a lack of control and economic, cultural, and physical insecurities, along with their skepticism of the federal government’s effectiveness, to plant seeds of doubt about the Biden administration’s approach.

The more virulent among these immigration opponents went a step further. Tucker Carlson claimed Biden’s policy was designed to “change the racial mix of the country”; then he invoked “the great replacement,” a white nationalist, anti-immigrant conspiracy theory.

Carlson, Orbán, and opponents of immigration around the world understand the power fear has to shape narratives. In the stories they construct, there is never enough enforcement to “control” immigration. Their story convinces the public of just one conclusion: that immigration of any kind must be ended.

How are proponents of immigration to respond?

I understand the desire by many advocates to avoid talking about security, which might be seen as endorsing a frame set by opponents of immigration. But Americans across the political spectrum want a border that is both humane and secure. Speaking to the former while ignoring the latter is a losing proposition.

There is a clear border security narrative that balances compassion with security. One that acknowledges and addresses fears, but still advances values.

There are few opportunities for legal immigration to the U.S., so cartels have filled the void as de facto immigration agents. They charge migrants fleeing violence and poverty up to $14,000 each to bring them to the U.S.-Mexico border, leading them to believe they are eligible for asylum. In many cases, this is untrue, and migrants end up in the camps Americans see on the news. Alongside humans, the cartels traffic thousands of pounds and millions of dollars’ worth of dangerous drugs that contribute to our growing opioid crisis. These two lines of business allow cartels to pocket billions of dollars.

The culprit is the cartel, not the migrant. The migrant is making a perfectly rational decision to find a better life. The chaos and dysfunction of our immigration system allows cartels to sell a path to immigration.

The solution lies in the creation of legal immigration pathways and an asylum system that treats people humanely. Migrants would much rather pay for a path to enter the U.S. legally than put their lives in the hands of cartels. Creating such a path would take a lucrative line of business away from organized crime and focus our border security resources on the actual threat to public safety: drugs.

The narrative addresses questions of security with a confidence and clarity that connects to people’s real concerns. The villainous cartel is a clear antagonist; the protagonist is the compassionate American who also wants a secure border. It acknowledges the fears and aspirations of native-born populations while also creating a sense of common purpose.

Such narratives also carve out space for nations to respond to major catastrophes that drive mass migration, as well as routine migration connected to poverty and climate change. The story that must be told is how immigration policy, smartly designed, can reinforce both compassion and security.

Without such narratives, the world will remain ensnared in a migration finger trap. Autocrats demonize migration and consolidate their power on its back. Activists respond with calls to welcome all who seek protection. In the dissonance and conflict, there is no unifying story about immigration. Only division.

It is time for a new story.