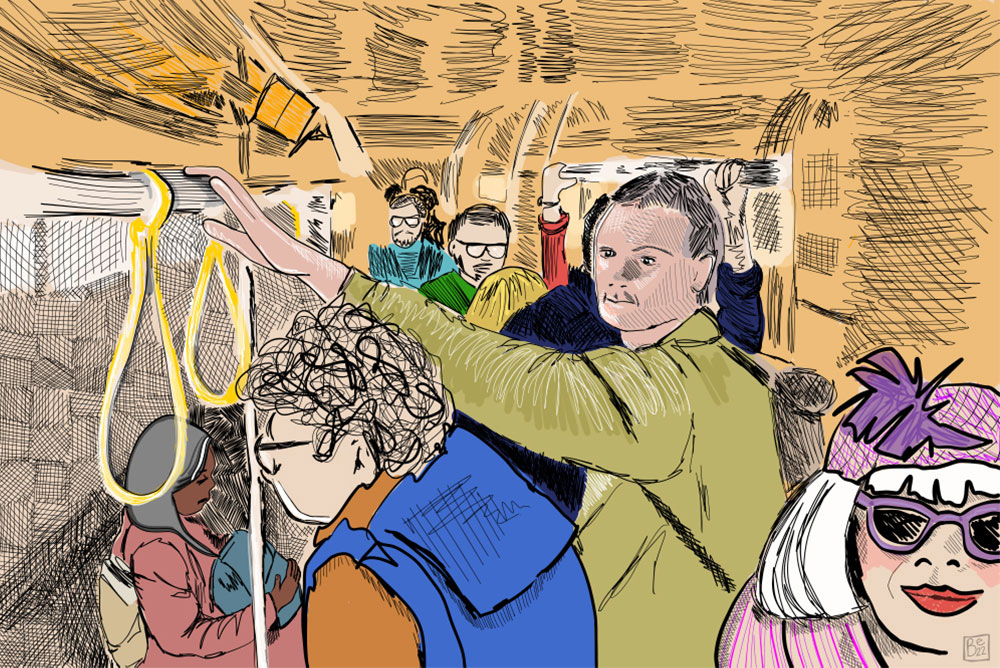 How many of us grow rapturous in the presence of a bus? The number, I’d guess, is relatively small. Hulking metal loaves of the urban landscape, buses do not, when rattling past, draw voices down to a reverential hush. Heads don’t turn. Some buses are admittedly charming. Think of London’s double-deckers. Think of a school bus, first day of class. Others, though, are comically awkward, like the long bendy kind, their waistlines accordioned round corners. Only a few are truly memorable: Rosa Parks, Montgomery, Alabama, 1955; Ken Kesey, Merry Pranksters, the ’60s; Keanu Reeves, Los Angeles, Speed.

This collective disdain, born of class warfare and the American obsession with cars, does buses a disservice. They’re democratic institutions, sight-seeing stalwarts, and the delivery system for poetry—both found and made. To ride one among neighbors, the stamp of your municipality affixed to its hide, is to bind the communal and the commuter. Of course, buses break down. Of course, they’re late. But it’s the gap between their purpose and their product, their design and their delivery, that tells the story, in miniature, of the U.S.’s efforts to fulfill its obligations to us all.

I’ve missed countless buses. More than a handful have missed me. I know the taste of exhaust, the bite of the rain. And yet I still swoon over the routes and the timetables, the stops and the seats, of my bus-riding life. My swoon grew only more swoony after a pandemic and a move reduced my ridership to near nil. Since 2016, I’ve lived in rural Indiana. There are no buses. And so I am nostalgic for a time when cosmopolitanism and contagion-free air were commonplace.

What do I love about buses? Repetition comes to mind. Eavesdropping too. I love watching the glass shelters of bus stops sail by like diving bells. I love knowing, by the sound of a speed bump or the scrape of a pendulous branch, how near I am to home. This reminds me of verse, which—formal or free—thrives on patterns. And it reminds me of the poetry of my fellow passengers: “Nope, you’re good,” a woman reassures a man, “we could eat off your face.” (Was his beard mangy? His brow stained?) Later, a few seats over, a daughter shares a cookie with her dad: “Daddy, don’t eat the crumbs!” (He stops.)

Such found poetry flourishes just below a published kind: those colorful signs, linked up like train carriages, that line a bus’s interior. They usually advertise bail bondsmen or prohibit loud music. Their language is boilerplate or cant. At least it was until, 30 years ago this year, the Poetry Society of America and New York City collaborated on a series of poems that went—in a spatial sense only—right over our heads. They called it Poetry in Motion, and it recast the poem, that most highbrow of literary artifacts, as a public good.

That project spawned other projects in other cities. All offer a respite from the hectoring advertisement or the moralizing drone of the PSA. In the era before smart phones, the bus poem gave us a little entertainment. Now, it releases us from our screens.

What was the first Poem in Motion? Walt Whitman’s “Crossing Brooklyn Ferry.” It’s there that the poet declares, to riders of ferryboats past, present, and future, that he too “was one of a crowd.” It’s a democratic statement, and democracy, to my mind, is what makes poetry and buses so symbiotic. Metaphor is an equal sign, a union, a democracy of the world’s disparate parts. Poetry thrives on it, and short poems rely on it more. Here’s the most famous Anglophone poem about public transportation, as it first appeared in 1913, by Ezra Pound:

In a Station of the Metro

The apparition of these faces in the crowd:
Petals on a wet, black bough.

Metaphor makes dissimilar things seem suddenly, surprisingly alike. These ghostly faces, for instance, and “[p]etals on a wet, black bough.” In Pound’s poem, the colon unites these opposites. Among American democracy’s disparate elements, it’s the franchise, the social contract, and—I like to think—public transportation. Is it any wonder that the literary critic I.A. Richards named the second half of any metaphor, the imagined part (here, “petals”), the vehicle? It’s where the imagination goes.

In America, Whitman saw this link first. Plenty have seen it since. The rush hour crowd is a stand-in for the demos. The confines of the carriage are a metaphor for the country. Poems about public transportation are always already poems about ourselves. “[M]ingled / black and white / so near / no room for fear,” Langston Hughes writes in “Subway Rush Hour.” Where urban density meets urban diversity, Hughes argues, racial acceptance stands a chance.

That’s when my belief in ex omnibus unum—what I’ve come to call this rumbling urge, this latter-day hope, that public transit can rejuvenate public life—was born.

In “Flat American Waltz,” a double sonnet that replicates, in its elaborate, circuitous syntax, an urban bus route, Kevin González reminds us that bus riders enter an American experiment that’s still hurtling forward, herky-jerky and unsure. “Let’s all believe,” he writes, “in the place, / these hard plastic seats are taking us.”

That’s harder to do these days, what with the republic in peril, and I wonder if my nostalgia for buses isn’t just a nostalgia for better times. From 2008 to 2016, I lived in cities and rode buses all the time. Violent insurrections felt foreign and a skinny Black guy from Chicago was president, buoyed by a coalition—people of color, white liberals, urbanites—that looked a lot like my fellow bus riders.

That’s when my belief in ex omnibus unum—what I’ve come to call this rumbling urge, this latter-day hope, that public transit can rejuvenate public life—was born. But ours is an era of the MAGA caravan and the Google bus, the Uber infiltration and the airplane mask fight. Today I wonder if we can pull the stop cord on our current predicament, hop off, and walk home. The trouble, of course, is that we’re already there.

But I wallow. I detour. At such moments, when I get lost in the now, I remind myself that any good poem exists in the now and the after. I think of Allen Ginsberg’s “In the Baggage Room at Greyhound,” a poem in which the poet—depressed, working as a luggage clerk—“realized shuddering / these thoughts were not eternity.” Or I consider the school bus, which is, for so many, the first taste of shared transit. All across America, school buses are pressing a connection between jostling rides and dense reads into the hot pleather seats of kids’ minds.

Or I rewatch Jim Jarmusch’s Paterson, a movie that taught me how riding a bus is like reading a poem. Both take you, once you’re on board, wherever they go. And the poet, like the driver, played here deftly by Adam Driver, leads you around its turns. And Driver here is both a poet and a driver; he writes poems at lunch. And the word “verse” comes to us from the Latin versus, “a “turn of the plow.” Every stop is a stanza break. Every segment shows you a little more of your world.

That movie helps me to remember that I’ve lived a privileged life, a life where the bus is a study not a slog, while Michael Spence drove a Seattle bus for 30 years, then documented his experience in The Bus Driver’s Threnody. Or I’ll reread Terrance Hayes’s “Woofer (When I Consider the African-American).” It begins when the poet forgets his “father’s warning about meeting women / at bus stops” and ends, well… I’ll let you read the poem.

Poetry lifts us and persists past us. It time travels. It makes you miss your stop. And when the era seems hellbent on collision, and you’re forced to watch it, bracing for an impact that you cannot avert, poetry reminds you that others lived through worse. “I am with you,” Walt Whitman writes in “Crossing Brooklyn Ferry,” “[j]ust as you feel when you look on the river and sky, so I felt.” This from a guy who survived a Civil War. Who saw the limbs piled high.

But it’s not Whitman that I’d choose for a seatmate on a long bus ride. No, that’d be Elizabeth Bishop, whose shoulder I’d look over, sharing her prismatically sure vision of the world.

Take “The Moose,” the poem where she and a busload of passengers spot the eponymous beast in the middle of the road. The driver stops. No one moves. “Why, why do we feel / (we all feel) this sweet / sensation of joy?” she writes, as the moose loiters, majestically unaware. Because we’re in this together. Because we’ll soon be moving on.