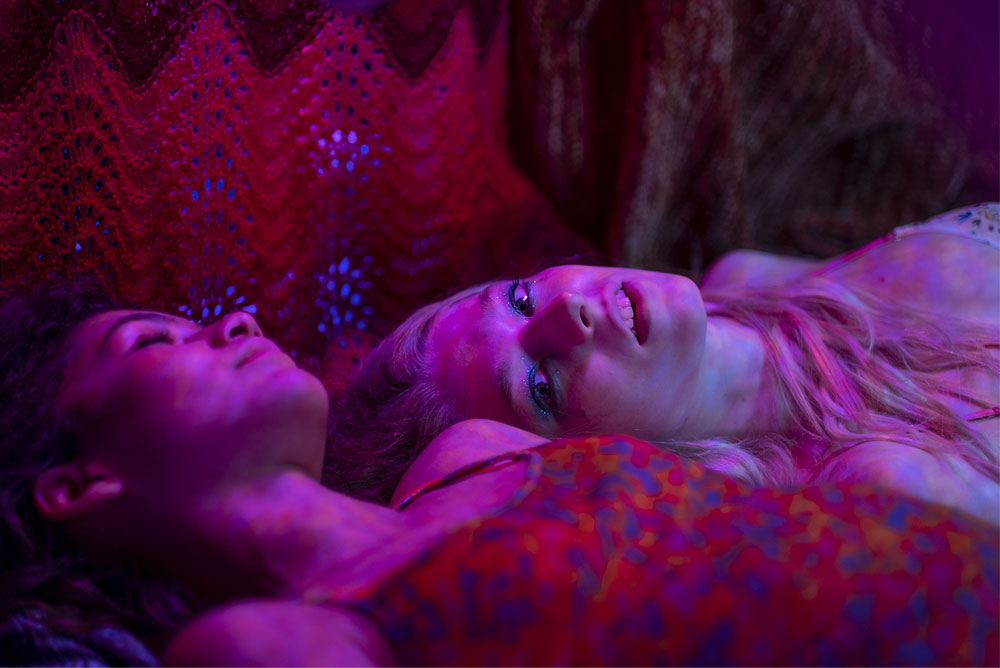 In the comment section of a one-hour loop of the Labrinth song “Forever” that’s already hit upward of a million views on YouTube, one person wrote: “This song makes me feel a way I did not know existed.” Another: “I can literally listen to this sound all night.”

“Forever,” with its catchy “oh-oh-oh, ooh” refrain, and the HBO teen drama it was composed for, Euphoria, share a big, aching quality that has made the show, which wrapped its second season this week, a phenomenon. From glitter eyeshadow to moody neon pink and blue lighting, Euphoria’s carefully curated look, mood, and sound have led its Gen Z audience to engage with it on social media not just as a show but as an aesthetic in its own right.

Internet aesthetic trends, like Euphoria, function as a kind of highly stylized form of self-expression. Their rise is commonly traced back to Tumblr, the visually friendly blogging platform that launched in 2007; today, they have become even more widespread on platforms like Instagram and TikTok in our increasingly digital world.

Even if you aren’t super versed in youth culture, you’ve likely come across at least one or two of the most pervasive of these aesthetic trends, whether it’s cottagecore, a nature-based romanticization of domesticity, heavily influenced by English countryside (think straw hats and peasant dresses), or dark academia, a Gothic upper-crust liberal arts academic experience replete with secret societies and tweed jackets. (Aesthetics Wiki catalogues many more and even suggests how you can find your own aesthetic.)

While the way people engage with online aesthetics may appear superficial, they—like their eponymous branch of philosophy, which explores the nature and appreciation of art, beauty, and taste—can have a deep impact on the way we live.

Aesthetics influence everything from “our choices regarding romantic partners, where we wish to live, how we dress, which objects we surround ourselves with, and the activities we pursue in our leisure time,” as a recent journal article asking why cognitive science should care about aesthetics argues. Because of this, aesthetics can also be used as a political tool.

That is something that the German Jewish philosopher Walter Benjamin warned about nearly a century ago in his most well-known treatise, “The Work of Art in the Age of Mechanical Reproduction.”

There, Benjamin first introduced the concept of the aestheticization of politics, linking it to the ascendancy of fascism.

“The logical result of fascism is the introduction of aesthetics into political life,” he wrote, asserting that in the hands of fascists, aesthetics could be made to distract people from their worst impulses, thus making inhumane acts palatable.

Benjamin was writing in 1935, during Italy’s nationalist war of aggression against Ethiopia, an invasion that is now seen as one of the episodes that led to World War II; his essay is a sobering read today, amid the Russian invasion of Ukraine.

Notably, in “The Work of Art in the Age of Mechanical Reproduction,” Benjamin cites the 1909 futurism manifesto, written by its founder Filippo Tommaso Marinetti, the charismatic Italian poet.

While the way people engage with online aesthetics may appear superficial, they—like their eponymous branch of philosophy, which explores the nature and appreciation of art, beauty, and taste—can have a deep impact on the way we live.

The manifesto, which was published on the front page of the newspaper Le Figaro, sets out to glorify the aesthetics of war. “War,” Marinetti asserted, “is beautiful because it establishes man’s dominion over the subjugated machinery by means of gas masks, terrifying megaphones, flame throwers, and small tanks.”

Historian Selena Daly, an expert on futurism at Royal Holloway, University of London, explained that literal war and metaphorical war “underpin a huge amount of futurist ideology right from the very beginning.” And it was through this enmeshing of art and politics that Marinetti sought to wage it.

“The idea is this is not just the reinvention of cultural life,” Daly said of futurism, but rather nothing short of “the complete reconstruction of the universe.”

In turn, no aesthetic space was left untouched—from poetry to art, fashion to furniture, ceramics to yes, even cooking. In The Futurist Cookbook, which was published in 1932, Marinetti called on Italians to abolish pasta because they needed to use imported wheat to make it. “We can see here how something that is ostensibly aesthetic—cookery as an aesthetic performance of pleasure—also has this really important link [to the policy Marinetti advances],” Daly said.

Aesthetics, of course, can also be used for the political good. Yale philosopher Jason Stanley’s book How Propaganda Works shows, for instance, how aesthetics have subverted harmful status quos. Citing an analysis of John Coltrane’s “My Favorite Things” from musicologist Ingrid Monson, Stanley writes that in the hands of Coltrane in 1961, the show tune from The Sound of Music turned popular Christmas song became “a way of taking a white aesthetic ideal and using it to represent the Black American voice and experience.”

Rosa Crepax, a cultural theorist at University of Hertfordshire, who’s written about how aesthetics on Instagram are informing the feminist movement, studies how aesthetics in the digital space continue to enmesh the serious and surface in the present day, and what that means for all of us.

Over email, she explained that today we’re living in a time where “everything, from politics to friendship and mental illness, is becoming aestheticized on social media.” Amid this, she sees that “the aesthetic distraction that Benjamin talked about is very much alive.” However, she added, “digital culture also opens up new possibilities for active participation, and an engagement, through aesthetics, with potentially radical forms of creativity.”

Of course, there is also something to be said for just engaging with aesthetics on social media simply as a way to relax. And for that, some comfort might be found in the philosophy of Søren Kierkegaard, of all people.

Northern Michigan University philosopher Antony Aumann chuckled when I asked him what the 19th-century Danish philosopher would make of the way we’re engaging with aesthetics online today.

Kierkegaard was critical of the aesthetic experience—his writings encouraged people to move away from the aesthetic sphere of beauty and enjoyment toward a more ethical, ultimately more religious way of life. So, if Kierkegaard saw our embrace of these contemporary aesthetic trends as a way to avoid civic mindedness, he likely would disapprove.

At the same time, Aumann thinks the Dane would approve of using aesthetics as a way to promote social good. “If people are using it to capture the attention of the masses and then redirect it toward a moral or political agenda, that would be like a deeply, deeply Kierkegaardian way of going about doing things,” he said, pointing to the fact that Kierkegaard himself used literature to inspire people to behave more ethically.

But there’s a possibility that Kierkegaard could even see the value in engaging in escapist aesthetics purely to unplug.

“We experience so much stress in our modern lives from the demands of work to the demands of morality, even, that we’re overwhelmed, and we need a moment away,” Aumann said. Observing that aesthetic trends function “kind of like a dopamine-based escape from the stress of modern life,” he mused that Kierkegaard might see it as a means to his end, “because it gives you a moment of relaxation, to recover and then return” to the mission-driven work.

In other words, if you need a beat, it’s OK—go ahead and break out that soft neon lighting filter and try out that Euphoria makeover tutorial, if you haven’t yet. Just make sure you don’t stay in that one-hour loop of “Forever” forever.