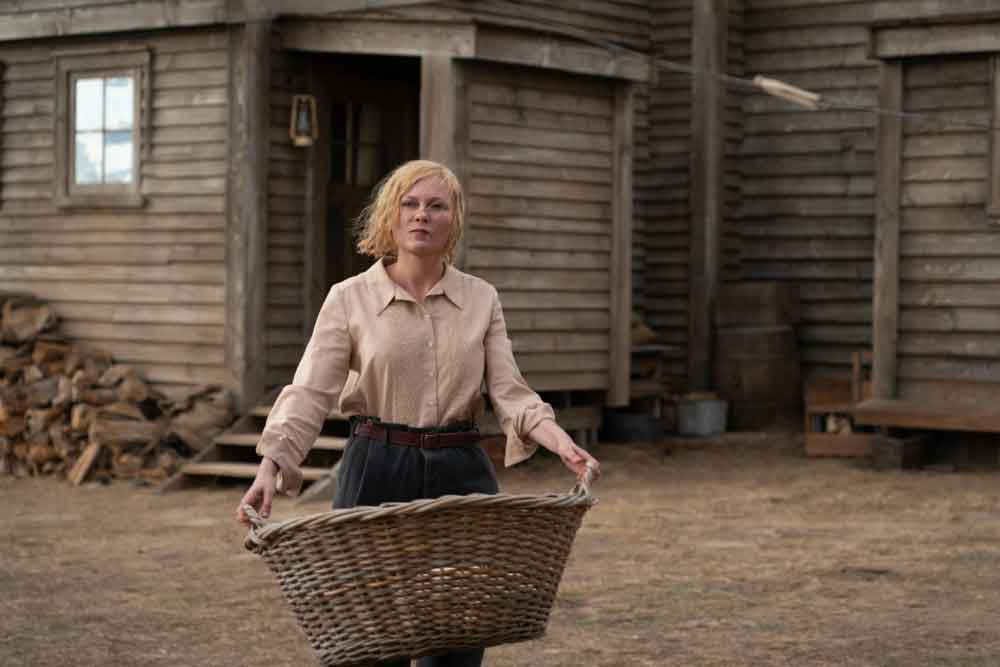 Kirsten Dunst in The Power of the Dog. Photo by Kirsty Griffin/Netflix

Robert Warshow, a tall, wry, chain-smoking New Yorker and an editor at Commentary magazine in the early 1950s, was obsessed with movies, comic books, and other forms of popular culture and treated them as serious subjects for intellectual discourse. He dropped dead of a heart attack in 1955 at age 37, but before he did, he wrote “The Westerner,” a groundbreaking essay that forever changed the way we think about cowboy movies.

Warshow’s core insight: the Western hero was not a solitary yet indomitable figure but rather a tainted and failed one. “The pictures… end with his death or with his departure for some more remote frontier,” wrote Warshow. “What we finally respond to is not his victory but his defeat.”

Warshow didn’t live to see The Searchers, director John Ford’s Western masterpiece, which was filmed the following year. And there’s no evidence that either Ford or his screenwriter, Frank Nugent, ever read the essay. But their protagonist, Ethan Edwards, played by John Wayne at the height of his rough-and-ready powers, snugly fits Warshow’s description.

Which brings me, 66 years later, to The Power of the Dog, Jane Campion’s ultra-contemporary take on this classic American genre.

Now, I’m not arguing that British-born Benedict Cumberbatch is cut from the same rugged denim as Wayne (though he sure knows how to fake it).  Nor would I suggest that Campion, a high-octane, highly cerebral New Zealander, is anything like the dour, hard-drinking, Irish-American Ford. But what I am saying is that The Searchers and The Power of the Dog have a lot in common, boast some of the same striking visual and narrative elements—and center around two powerful but deeply troubled protagonists.

Together, these films make a strong case for why the Western remains one of our most compelling cinematic inventions.

As Martin Scorsese once noted, the Western ultimately is a ghost story, its tales set in a past that can be evoked but never retrieved.

On the surface, the stories seem very different. The Searchers, set in frontier Texas in 1868 (but filmed in picturesque Monument Valley, Ford’s favorite Western location), is about an uncle’s quest to rescue Debbie, his 9-year-old niece, who’s been kidnapped by Comanches in a raid in which most of her family members were slaughtered. Ethan Edwards is a Civil War veteran who has stayed away from the family ranch for three years in large part because he is secretly in love with his brother’s wife, and she with him. After both brother and wife are murdered, he sets out to wreak vengeance on the killers.

But as the years pass, he also resolves to kill his niece, because she has grown into a young woman and become a Comanche wife. It’s an honor killing: she’s had sex with Indians, willingly or not, and therefore she must die. He is accompanied on his five-year search by Martin Pawley, Debbie’s adopted brother, who respects Ethan’s superior knowledge and leadership but is determined to prevent his uncle from harming his beloved sister.

The Searchers is a morally complex film and remains a controversial one. Its Comanche warriors are depicted as killers and rapists, but as the story unfolds, we begin to see that they and their families have also been slaughtered and victimized during the brutal, 40 year war of civilizations between Texans and Comanches, the longest conflict on American soil. And we also begin to see that Ethan, our charismatic hero, is a deeply disturbed racist.

The Power of the Dog takes place on a prosperous Montana ranch nearly 60 years later. But violence and family are also central to the story. Phil Burbank (Cumberbatch) and his soft-spoken younger brother George are equal business partners, but Phil is the alpha male—he’s cunning, arrogant, and abrasive, calling his brother “Fatso,” and repeatedly deriding George’s quiet decency. Phil rides herd over cattle, horses, and ranch hands with a macho swagger that includes castrating a bull.

The incident that triggers the film’s plot isn’t an Indian raid but George’s decision to pursue and marry Rose, a struggling widow operating a small-town boarding house. Her arrival at the Burbank mansion along with Peter, her sensitive, artistically inclined teenaged son, enrages Phil, who smells out her painful fragility, bullies her, and drives her to drink, all the while hurling homophobic slurs at Peter and inciting his ranch hands to join in the collective mockery.

Campion and Cumberbatch slowly allow us to see that Phil’s hyper-masculinity is an elaborate disguise. It turns out that Phil graduated Phi Beta Kappa from Yale, where he studied the classics (“so he swears at the cattle in Greek or Latin?” quips a distinguished dinner guest). He learned his Western lore from an older cowboy named Bronco Henry, whose grooming of Phil clearly went well beyond the handling of livestock. Although Henry has been dead for two decades, Phil still worships him. Phil also keeps a stash of male magazines in a trunk that Peter discovers.

Each movie slowly zeroes in on the changing relationship between the main character and his younger male companion. In The Searchers, Ethan starts out by deriding Martin’s naïveté and lack of frontier experience but comes to admire the younger man’s grit and refusal to quit the search, despite having a good job and impatient fiancée waiting for him at home. When the two men finally discover the Comanche village where Debbie is living, Ethan grudgingly accedes to Martin’s demand that he be given the chance to rescue her before the camp is attacked by cavalrymen and Texas Rangers. “It’s your funeral,” Ethan tells him. 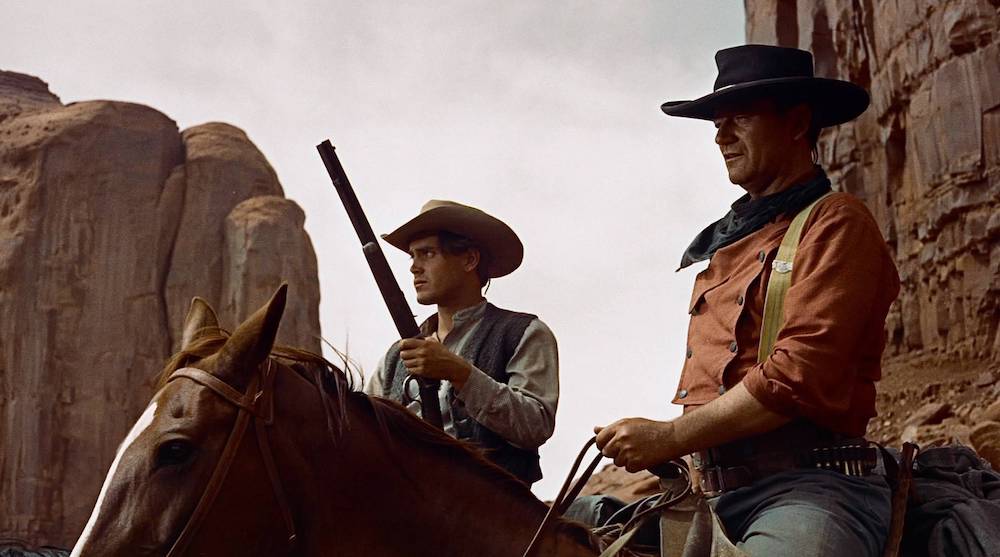 (Left to right) Jeffrey Hunter as Martin and John Wayne as Ethan in The Searchers. Courtesy of Warner Bros.

In The Power of the Dog, Phil, too, begins to warm to Peter, partly because he knows that Rose hates this budding friendship and partly because he is seeking to groom Peter the way Bronco Henry once groomed him. But Peter has his own subtle agenda, one that he successfully conceals from Phil, and he rescues his mother from her tormentor, just as Martin Pawley saves his sister from Ethan.

Like their angry, damaged protagonists, the two directors, Ford and Campion, have much in common. Both are visual poets who move deftly between the obliterating grandeur of their remote outdoor settings and the intimate emotions and conflicts played out in the dark, claustrophobic confines of ranch houses.

Ford bookends his movie with two of the most memorable camera shots in film history—framing a character within a doorway that opens onto the stunning vistas beyond. Campion too offers glimpses of the untamed wilderness through the windows of the ranch house’s kitchen and barn. Neither director lets us forget that we are at the edge of civilization, a place of raw power, harsh beauty, and abiding mystery, and the testing ground where both Ethan and Phil, true Men of the West, were forged.

Each director prefers pictures over words. Ford famously cut large chunks of dialogue from the Searchers script, leaving viewers to determine for themselves the true nature of Ethan’s feelings for Martha and the reason why he spares Debbie’s life at the movie’s thrilling climax. Similarly, Campion allows the faces and physical movements of her characters to convey emotions they themselves can’t or won’t admit to. And in the case of Peter, she uses his careful stare and eerie stillness to conceal his lethal plan and purpose.

But the human centerpiece of each film remains its solitary and deeply disturbed protagonist.

Ethan, deranged by his hatred and grief, uses gun violence to resolve his inner conflicts. Yet he doesn’t kill his niece, who reminds him of her dead mother, the only woman he has ever loved, and the brilliance of Wayne’s performance lies in the way he conveys his internal struggle while never articulating it. Phil is compelled to hide his sexuality from the men he leads, and perhaps from himself as well, and Cumberbatch skillfully conveys Phil’s inner turmoil.

Each man will be defeated by his younger companion. And in both movies, love finally triumphs over hate. Ethan will survive—you can’t kill John Wayne, he’s too strong—but he is too violent to dwell in the civilized world, and he is doomed like the Comanche corpse whose eyes he shoots out early in the film. He will wander forever between the winds.

Phil is an even more tragic figure. Set adrift like a ship without an anchor once George weds Rose, he tries to find stability by nurturing Peter, who ultimately brings out his better nature. But it’s too late. Peter has already determined that to save his mother, Phil must die.

Warshow’s essay foretold both men’s fates: to die or depart for an even more remote corner of the vast but ever-shrinking frontier. As Martin Scorsese once noted, the Western ultimately is a ghost story, its tales set in a past that can be evoked but never retrieved.

Or as film historian Edward Buscombe, another wise student of American cinema, has observed, “One way or another, Westerns are always about death.”