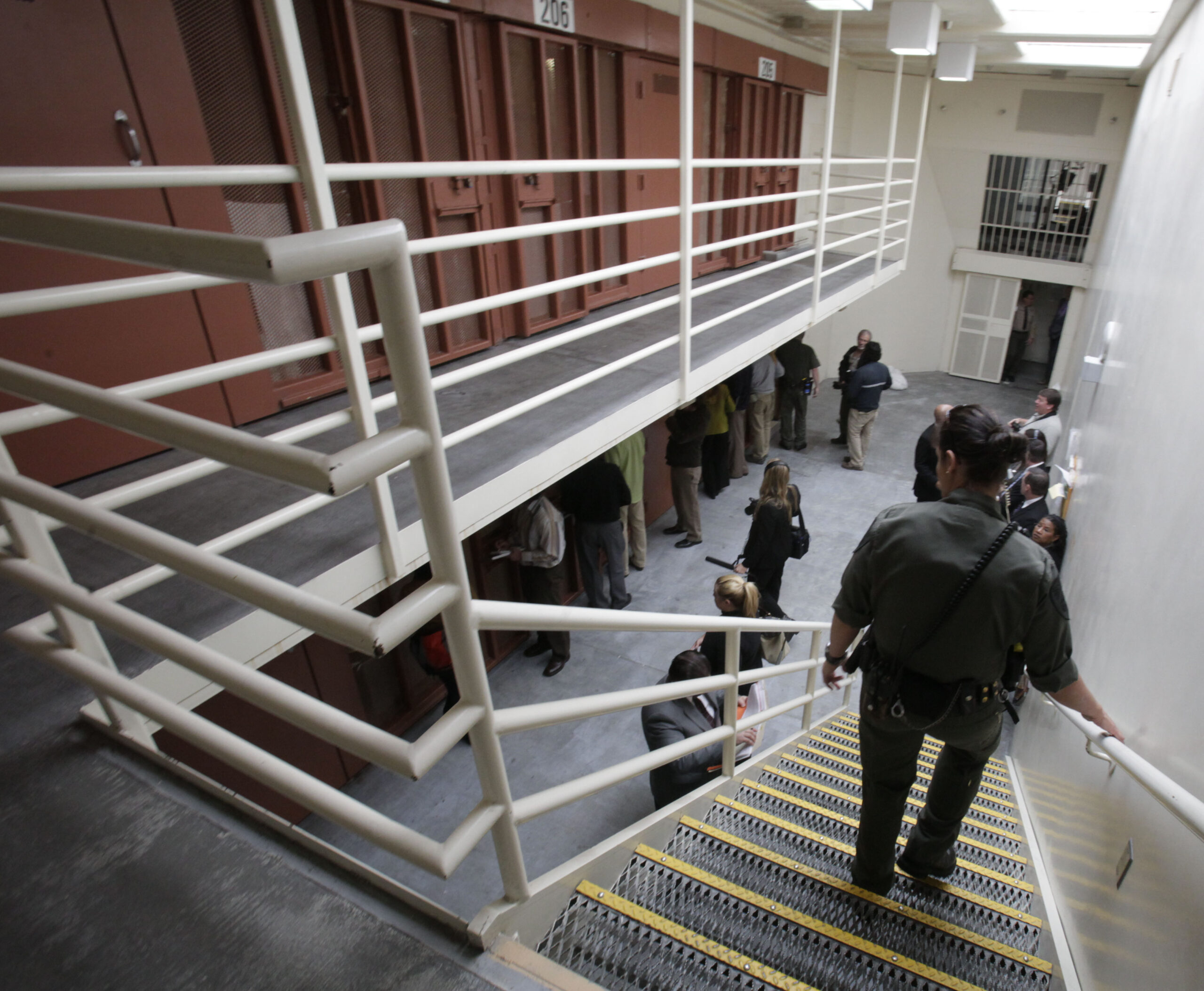 David stands with his feet in the foamy water, his arms outstretched, smiling face turned up to the February sky. From where I’m standing among the driftwood, the line of his arms matches perfectly with the Pacific horizon beyond. A little way off, a small, dark-haired woman says something in Cambodian, and her daughter answers laughingly in English. “Don’t worry, Mama.  He’s not going to catch cold!”

David turns and jogs up the beach to rejoin his family, stooping to pluck a pair of new-looking white sneakers from the sand. “Man! It’s beautiful!” He’s breathless.

With the marine layer breaking up of its own accord, unhurried by any wind, and the morning gray Pacific turning afternoon blue, I see that Del Norte County has given David something special:

A beautiful day to get out of prison.

David has been living just five miles from the beach for the past seven years, but this is his first time here, exploring the far northwest corner of California along with his family and a handful of friends.

David steps into his shoes and pauses, looking at the waves. “Look,” he says. “As far as I can see, nothing but water. No concrete wall in front of me, nothing obstructing my view.”

David was the first prisoner I ever spoke to inside Pelican Bay—at a performance and art show put on by two Arts in Corrections classes in the B-Yard gym. I had just been hired to teach a new class, audio journalism, which would produce a podcast with the prisoners of Pelican Bay.

It was my first time inside a maximum-security prison. As I stood under the basketball hoop taking it all in—the guards, the cage suspended from the ceiling, the rundown middle school feel of the gymnasium—an inmate with a pen and notebook stepped out of the middle distance and introduced himself.

David Nguyen, from the Pelican, the prison newspaper.

His notebook, I saw, was filled with tiny, exact writing, every margin filled. My hand cramped just looking at it. When he learned I was going to be the audio journalism teacher, David’s eyes lit up. Could I maybe get permission, he asked, for one of those portable digital recorders? I glanced again at his notebook and told him I’d see what I could do.

Spoiler: I could do nothing. It took two months for the equipment I wanted to bring inside—a laptop, a mixer, two mics, a field recorder—to be approved. Meanwhile, I became acquainted with Pelican Bay, both physically and bureaucratically. I signed blank forms. I got two tuberculosis tests. I learned why I couldn’t wear dungarees inside the prison. I was issued chits and keys and an alarm that looked like a garage door opener. I learned what a sally port is.

And I learned that, even inside the concertina and chain-link, you were still in Del Norte; the hump-backed hills of redwood and spruce peering over the concrete walls into the yards were as much a reminder of place as the familiar faces I saw behind bulletproof glass.

Del Norte is not big. I already knew many of the corrections officers (COs) and administrators at Pelican Bay—they are parents and coaches and members of local bands. As I stood one morning with my notebook waiting for a gate to slide shut behind me so that another could open in front of me (a sally port!) a familiar face leaned out of the guard tower to ask if my father is enjoying his retirement.

But Pelican Bay looms large in our small county. When the fishing and logging industries collapsed in the ‘70s and ‘80s, the economic drivers that had sustained Del Norte for more than a century dried up. Unemployment swelled to Great Depression levels. Growth stopped.

Then, in the mid-1980s, the state proposed building a maximum-security prison here to house the “worst of the worst” of California’s incarcerated—the gang leaders and other inmates deemed the most violent and dangerous.

Some locals fought the building of Pelican Bay; Sacramento tried to placate them with promises of a forested buffer, a margin of trees to hide what was, at the time, the highest security prison in the free world.

For better or worse, by the time it opened in 1989, Pelican Bay had already saved Del Norte, giving the community its largest single employer and an economically stable base. Crescent City, which just a few years prior had removed a stoplight from its deserted downtown business district, was now building elementary schools.

But as the ‘90s progressed, life inside, for both prisoners and staff, became more and more deadly. The prison built to house the “worst of the worst” lived up to its reputation.  Riots were routine. Violence was expected. The community immediately outside the prison learned to gauge the severity of an event by the sound of the sirens along Lake Earl Drive.

In an effort to decapitate the various prison gangs, in 2006 the state segregated all the biggest leaders out of the general population, placing them side-by-side-by-side in Pelican Bay’s secured housing unit, the SHU.

What happened next will probably be in history books (or their equivalent) someday, but the first time I heard the story was in my very first audio journalism class in 2019.

I learned that, even inside the concertina and chain-link, you were still in Del Norte; the hump-backed hills of redwood and spruce peering over the concrete walls into the yards were as much a reminder of place as the familiar faces I saw behind bulletproof glass.

I found my two students waiting patiently for me one morning in the A-Yard gym. It was April, and the bright sun crowded through the gym doors. After introductions, I asked them, “What do you want to talk about in this podcast?”

Daniel, a tall, stringy man in glasses, neck tattoos snaking across his jugulars, sat up.  “We could talk about ‘The Awakening,’” he suggested.

Those men gathered in the SHU, Daniel explained, had started talking with each other, trading books, and making plans. Together, they wrote and signed the Agreement to End Hostilities, instructing their subordinates to stop killing each other, to stop feeding the violent environment that kept the entire system-wide prison population perpetually locked-down.

The “worst of the worst” called themselves the Short Corridor Collective, and their next action was to orchestrate hunger strikes that spread from prison to prison across the state, protesting indeterminant SHU sentences and solitary confinement. They argued for the re-introduction of educational and vocational programming designed to rehabilitate inmates for possible release.

It worked. The Short Corridor Collective and the Agreement to End Hostilities resulted in major reforms. The Department of Corrections went on to change usage of the SHU, revamp inmate healthcare, and bring back rehabilitative programs.

I’d had no idea. “That all happened here?” I asked.

“Yup,” Daniel answered, “and it’s still happening.” He went on to tell me about sentencing reforms that had been invigorated by the work of the Short Corridor Collective. Prisoners who had been convicted as young men of 19 or 20 were now having their sentences reconsidered and, in some cases, were being released.

“’Course, none of these things apply to me,” Daniel said. He had been sentenced to life without parole at the age of 23. So why, I asked, did he take part in programming, if there was no chance to come before a parole board and show how he had been rehabilitated?

Over the next couple of months, the audio journalism classes filled up with students, the equipment got approved, and we started producing “Pelican Bay UNLOCKED.” My students—up to 15 of them—recorded segments about their time inside, the changes and transformations they’d undergone, their hopes for the future.

When our first episode came out at the end of 2019, a local online news service interviewed me for an article about the podcast. I said something about how these prisoners were part of Del Norte County, too. The comment section caught fire, split pretty evenly between positive messages of support and messages along the lines of, “These men are animals who don’t deserve to be a part of any community.”

Though David was not part of the podcast, I’d often see him on the Yard and we’d catch up, my laptop slung over my shoulder, while David juggled his notebook and college materials.

After COVID shut down all classes inside Pelican Bay, I lost touch with David.  The podcast continued production, though, thanks to permission I’d gotten to record phone calls with my students. During one of these calls I heard that after 15 years inside, David was coming up for parole thanks to sentencing reforms.

And then, months later, I find myself at the beach with David, his family, and his friends. We finish the day like tourists, at the Crescent City harbor, watching the noisome sea lions that spend the day lolling on the docks. As we lounge among the barking animals, David shakes his head and smiles.

“It’s funny,” he says.  “I keep catching myself thinking, like, where’s Pelican Bay? It’s this way or this way…”  He waves an arm vaguely northward. “Like I can’t stop orienting myself to the prison. I wonder when that will stop.”

His words make me laugh. David and his family have a long drive ahead of them, back to Southern California, where his life awaits. But in that moment on the dock in Crescent City, he sounds just like a true Del Norter.