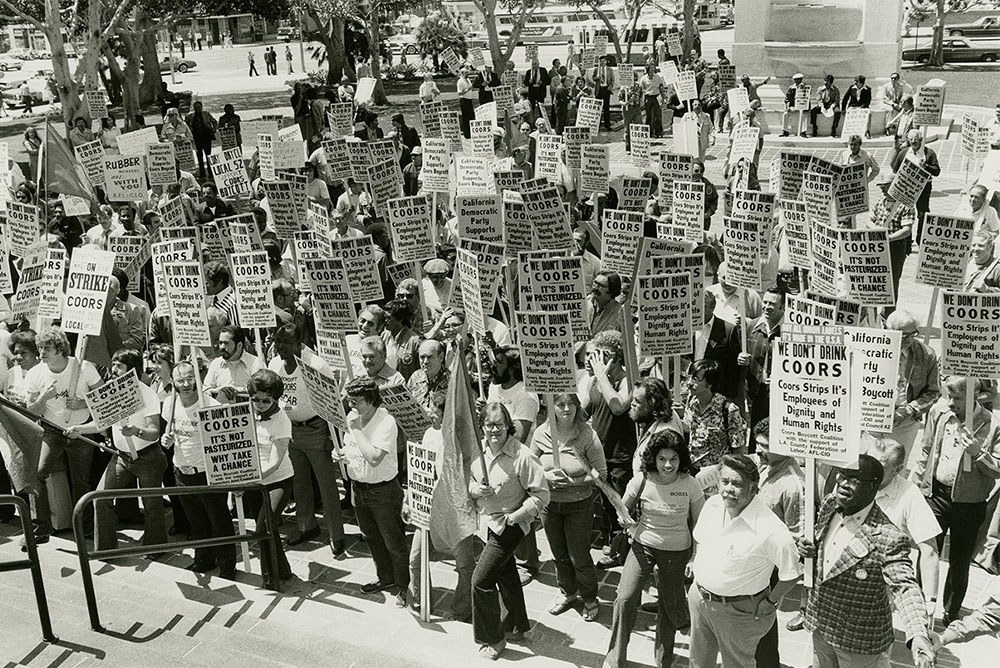 A rally calling for the boycott of Coors beer. Courtesy of the AFL-CIO George Meany Memorial Archive.

In 1973, San Francisco beer delivery drivers were at odds with local beer distributors over low wages, union-busting efforts, and employment discrimination. Distributors of the Colorado-based Coors Brewing Company were particularly notorious—their parent company went as far as to require pre-employment polygraph tests to weed out supposedly undesirable hires. The drivers, members of the Teamsters union Local 888, decided to strike, and to call for a boycott of Coors beer. By the fall of 1974, the boycott included LGBTQ consumers, Chicanx and Latinx organizations, Black activists, and Native American community leaders in the Bay Area.

Though it is 1967’s Summer of Love, the student-led strikes at San Francisco State College of 1968, and the Indians of All Tribes’ 18-month occupation of Alcatraz Island from 1969 to 1971 that made the San Francisco Bay Area a famous hub of 1960s and ’70s countercultural radicalism, this lesser-known, coalition-based effort also left an important mark. Now, as San Francisco once again becomes a hub of coalitional organizing, labor and community activists are revisiting the boycott’s innovative movement-building approach to take on a present-day corporate goliath: Amazon.

What initially united the diverse activists of the 1970s Coors boycott was antagonism for the Coors Brewing Company’s labor practices, but as the boycott grew, the Coors family’s politics became its focus. Third-generation executives Joseph and William Coors were closely linked to conservative politicians and generously funded right-wing organizations like the Heritage Foundation. By challenging Coors, boycotters saw themselves as fighting “conservatism, anti-unionism and racism,” as a Bay Area Teamster publication put it.

But these coalitions required more than a shared enemy; cementing a movement required the perseverance of organizers who moved in and out of LGBTQ, labor, and other activist circles in the Bay Area. One key leader of this work was Allan Baird, a Korean War veteran, musician, and Teamster who organized pickets and boycott actions out of his home in the Castro District. With the help of a Latvian refugee, Andris (Andy) Cirkelis, and dozens of other Teamsters, Baird dispatched striking beer drivers to the area’s grocery stores. Using picket signs, leaflets, and a red-and-white bullhorn, they managed to get many stores to remove the offending cans from their shelves.

Original boycott organizers still take pride in the fact that Coors beer has never touched their lips. And now, nearly 50 years after the boycott got its start, a new generation of activists is studying its success. For young Teamsters in particular, the inspiration is not just sentimental or symbolic—it is a blueprint for their own efforts to build solidarity and union power.

As these pickets fanned out in San Francisco, Oakland, and beyond, Baird and his team worked to build meaningful connections with communities outside of the labor movement. Baird had only to go around the corner from his home to spark one such connection—with camera store owner, aspiring politician, and gay activist Harvey Milk. As the two became fast friends, Milk emerged as a key supporter of the boycott, on the condition that Baird and the Teamsters guaranteed jobs for LGBTQ drivers. With Milk on board, other LGBTQ activists joined the fray, such as Cleve Jones, Milk’s assistant and future union leader, and Howard Wallace, the co-founder of a radical organization called the Bay Area Gay Liberation (BAGL). BAGL meetings became hotbeds of Coors boycott organizing—after meetings, members would hit local gay bars to convince patrons and owners alike to join the fight.

Baird and Cirkelis also forged alliances and collaborated with other activist communities, from radical Chicanos to Black civil rights leaders. In November 1974, a coalition of over a dozen organizations, including the American Indian Movement and Black Panthers, endorsed both the boycott and a ground-breaking Teamsters affirmative action plan that prioritized LGBTQ and applicants of color for open beer driver positions. Shortly thereafter, Milk editorialized in the Bay Area Reporter that “the union of beer drivers, blacks, Chicanos and Latinos and gays fighting together” had planted “the seeds of joint battles.”

Eventually, after a decade of active boycotting that stretched all the way to the East Coast—where Fenway Park ousted Coors Beer from its concession stands—most of the boycott coalitions broke up. The movement’s success in prompting changes in Coors’s employment practices, as well as company efforts to infuse hundreds of millions of dollars back into boycotting communities, made the urgency of rejecting the beer fade.

Original boycott organizers still take pride in the fact that Coors beer has never touched their lips. And now, nearly 50 years after the boycott got its start, a new generation of activists is studying its success. For young Teamsters in particular, the inspiration is not just sentimental or symbolic—it is a blueprint for their own efforts to build solidarity and union power. Under the leadership of a progressive slate of national organizers, the Teamsters have set their sights on the “massive long-term task” of organizing Amazon’s fast-growing and highly precarious workforce.

Coalition-building is integral to these efforts. In San Francisco, in response to plans to build a new Amazon distribution center southeast of downtown, Teamsters have partnered with a diverse group of community organizations—from other union locals to transit riders, nonprofits, and neighborhood advisory boards—to create the San Francisco Southeast Alliance (SFSEA). Founded in 2021, the SFSEA seeks not to stall the Amazon project but, rather, to guarantee that the company make a “meaningful long-term investment” by investing in affordable housing in the area, committing to environmental standards, and guaranteeing union jobs. The coalition and its partners have also worked closely with the San Francisco Board of Supervisors to place an 18-month moratorium on new parcel delivery facilities, to give time for thorough studies of environmental and community impacts. After a unanimous vote in favor of the moratorium in March 2022, Amazon announced it would pause construction on this new facility to reevaluate long-term priorities and work with community partners.

As activists across the country work to contain Amazon’s expansion and unionize its warehouses—from the long-running organizing campaign in Bessemer, Alabama, to the most recent victory on Staten Island—Bay Area activists are looking back at their own playbook. The rank-and-file organizers taking on the herculean task of fighting—and organizing—Amazon are following in the footsteps of Baird and other Coors boycott organizers.