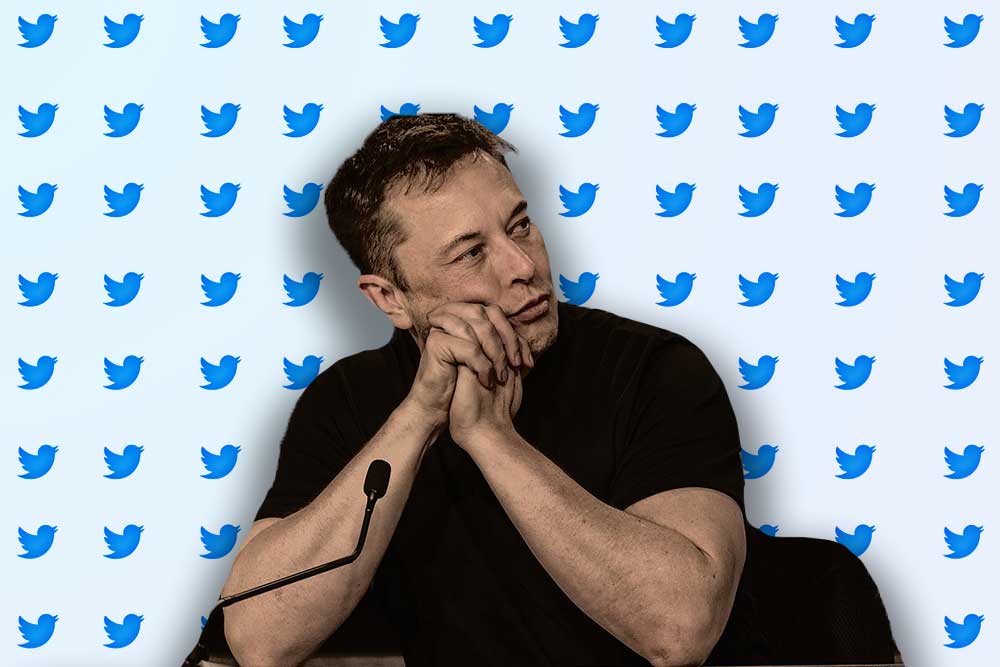 
The term “agent of chaos” has been rattling around in the back of my brain since a billionaire announced his intention to acquire a “sporadically profitable social company,” to quote the New York Times, for $44 billion, roughly 19 percent of his net worth. Some used it in the negative, but mostly it was the fandom who murmured it, admiringly, after news of the purchase broke. Their trickster king, at it again.

In this chaotic period, people like Elon Musk, who seemingly wield chaos like a lightning rod, have become lauded for such acts, regardless of their motivations, or plans, or if they even end up seeing them through. And this moniker, “agent of chaos,” has come to cloak them in a kind of neutrality—after all, they’re just sowing chaos for chaos’ sake. The label, I’ve noticed, not only seems to absolve them of any responsibility, but even holds up their pot-stirring as some kind of noble act.

The use of “agent of chaos” in this way appears to have come into vogue after the late Heath Ledger, playing the Joker, popularized the term in Christopher Nolan’s The Dark Knight.

“​​Introduce a little anarchy, upset the established order, and everything becomes chaos,” the oft-quoted line begins. “I’m an agent of chaos,” the Joker continues, “and you know the thing about chaos? It’s fair.”

The Dark Knight, which came out in 2008, was widely considered a commentary on the American invasion of Iraq. The Joker, in turn, spoke to fans who embraced the character as the philosophical anarchist the times demanded: “He serves as a chaotic mascot for discord in an overly ordered world that ironically, to them, makes no sense,” explains a Comic Book Reviews article that gets at the character’s appeal, adding that the Joker “disrupts the status quo, standing in opposition to all society has to offer, and laughs.”

But the agent of chaos archetype is one that humans have been drawn to throughout the ages. The character appears in mythologies, folklores, and religions around the world—from the Coyote, a trickster character who frequents Native American tales, to Anansi the Spider, which originates from the Asante people of Ghana.

The origins of the literal term agent of chaos, however, is somewhat shrouded. The creation of the phrase itself arguably traces back to an 1895 book Creation and Chaos in the Primeval Era and the Eschaton by German Old Testament scholar Hermann Gunkel. Its arrival in popular culture appears to have come much later, with the term agent of chaos possibly debuting as late as the Cold War.

Reading about agents of chaos throughout history, what quickly becomes clear is that while some are bad actors, many are actually working to better society.

Its emergence in the 1960s came at a point when chaos was everywhere. The culture reflected this with offerings like Get Smart, Mel Brooks and Buck Henry’s parody of the spy genre, where KAOS was a literal institution, in fact, the international organization of evil. Even scientists began taking chaos seriously at this time. In 1963, meteorologist Edward Lorenz published a paper documenting observations from a computer model he’d built to predict the weather. His discovery gave rise to modern chaos theory—which holds that even apparently random systems possess some pattern or order.

It was in this moment that American science fiction author Norman Spinrad published his second novel, titled Agent of Chaos, in 1967.

“As far as I know I invented that term,” Spinrad told me over the phone about Agent of Chaos, which drew new attention during #Brexit for the name of its main character, which so happened to be Boris Johnson.

Years before the real Johnson became a global agent of chaos, Spinrad’s fictional Johnson was the bumbling head of the Democratic League, one of three powers competing for world domination. The League’s main nemesis was the powerful totalitarian Hegemonic Council, led by Vladimir Khustov, but a more dangerous opponent lurked in the background chasing them both: the Brotherhood of Assassins, led by Robert Ching, otherwise known as Agent of Chaos. The book opens with the question, “Which of these leaders would you follow?” But Spinrad cautions against making a hasty judgement. “Don’t make up your mind too fast,” he writes.

Spinrad wrote Agent of Chaos in San Francisco, with the Vietnam War on his mind. “My point was that these two things working together”—democracy and totalitarianism—“end up with a third thing, which is chaos,” he said.

Over time, Agent of Chaos has acquired a cult following, particularly among readers who are incarcerated, many of whom have gravitated toward the novel’s pushback against clear-cut power structures.

“My idea of chaos was more positive,” says Spinrad, reflecting on the work’s legacy. “It was a different idea of consciousness and politics. Now, the agent of chaos is something more negative with things falling apart. In that sense that’s not the way I intended it to be. But there it is.”

With this framing, it’s worth pausing to consider who the agents of chaos of our time really should be.

After all, reading about agents of chaos throughout history, what quickly becomes clear is that while some were bad actors, many were working to better society. I especially appreciated the perspective of professor Namorah Gayle Byrd, who is Chitimacha/Cherokee and an expert on trickster tales. In her writings, she calls attention to how tricksters are actually a force of good because they challenge the status quo and make people reevaluate their choices. That’s why she refers to them as “society’s caretaker.”

If such characters cross a line—and “become oppressors and abuse their power to transform spaces”—then, she argues, they no longer deserve the trickster label.

But don’t worry. For those who don’t meet the requirements—because they “use their powers of chaos and transformation to destroy rather than to balance or rebalance societal norms”—they still have an important role of their own to play. According to Byrd, they’re “the types that call the real Tricksters to arms.”